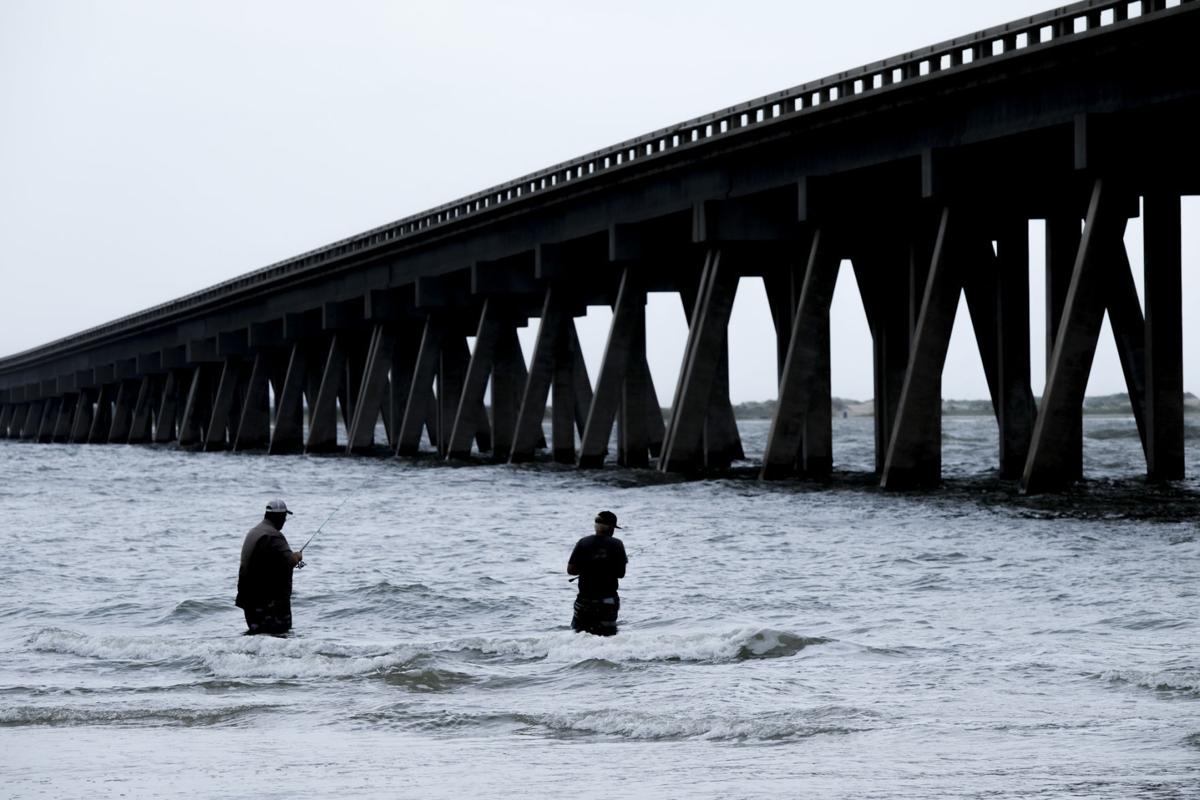 People fish June 29 at the San Luis Pass. Ten people have died there since 2013, including Jacob Szydlowski, 19, of Alvin, who died while wade fishing June 23. 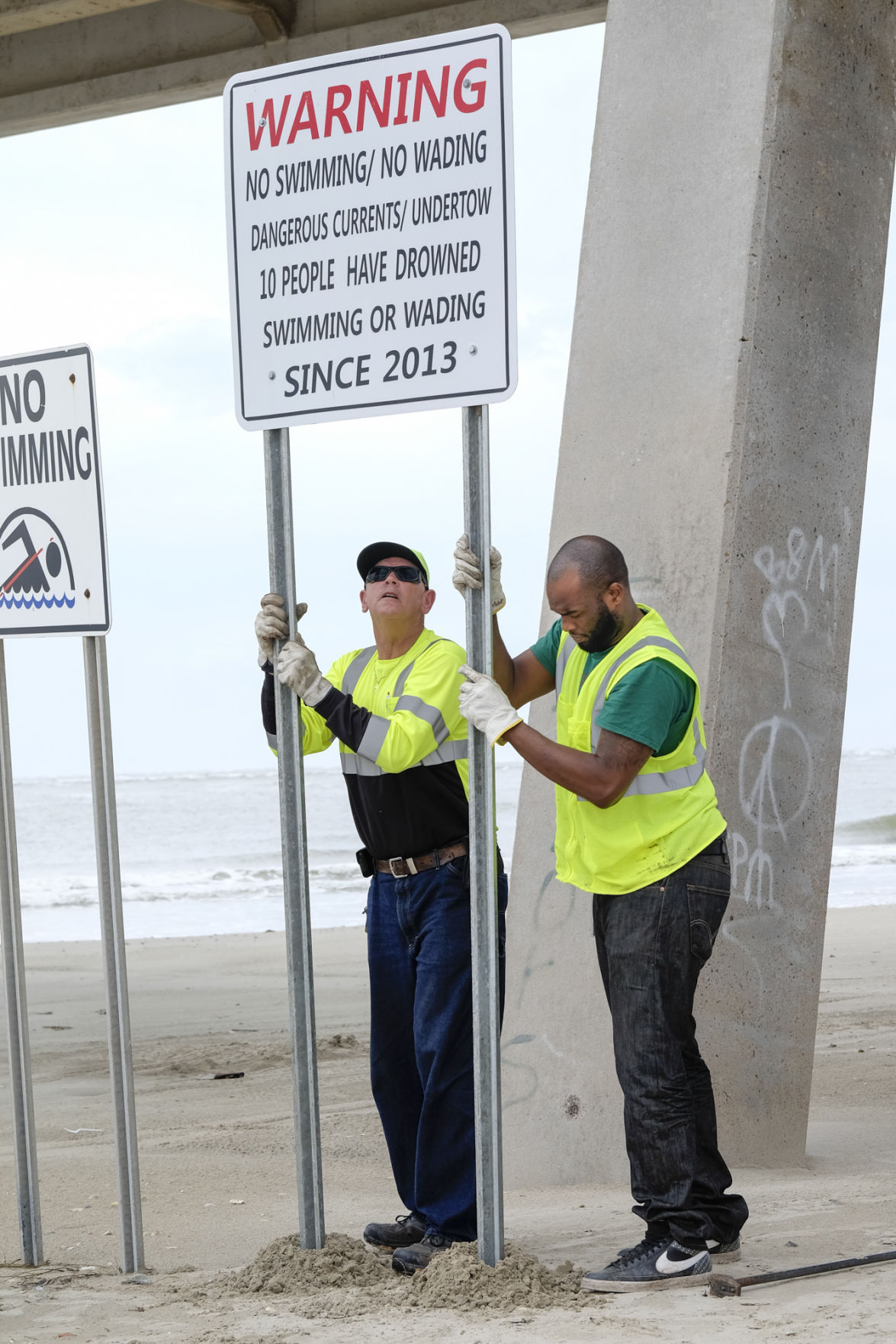 Winston Rossow, left, and Jordan Alexander put up a new sign June 29 at San Luis Pass warning beachgoers about how 10 people have died there since 2013. 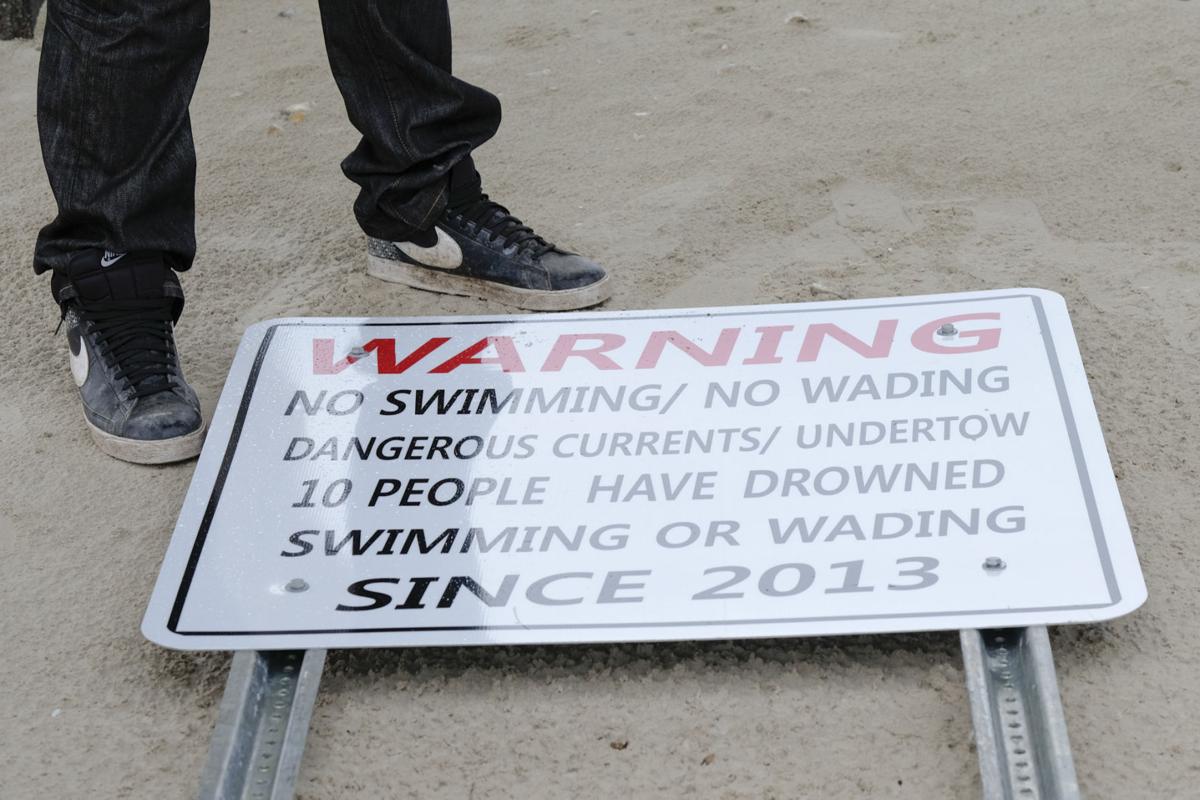 Jordan Alexander stands over the new sign Thursday at San Luis Pass warning beachgoers about how 10 people have died there since 2013. 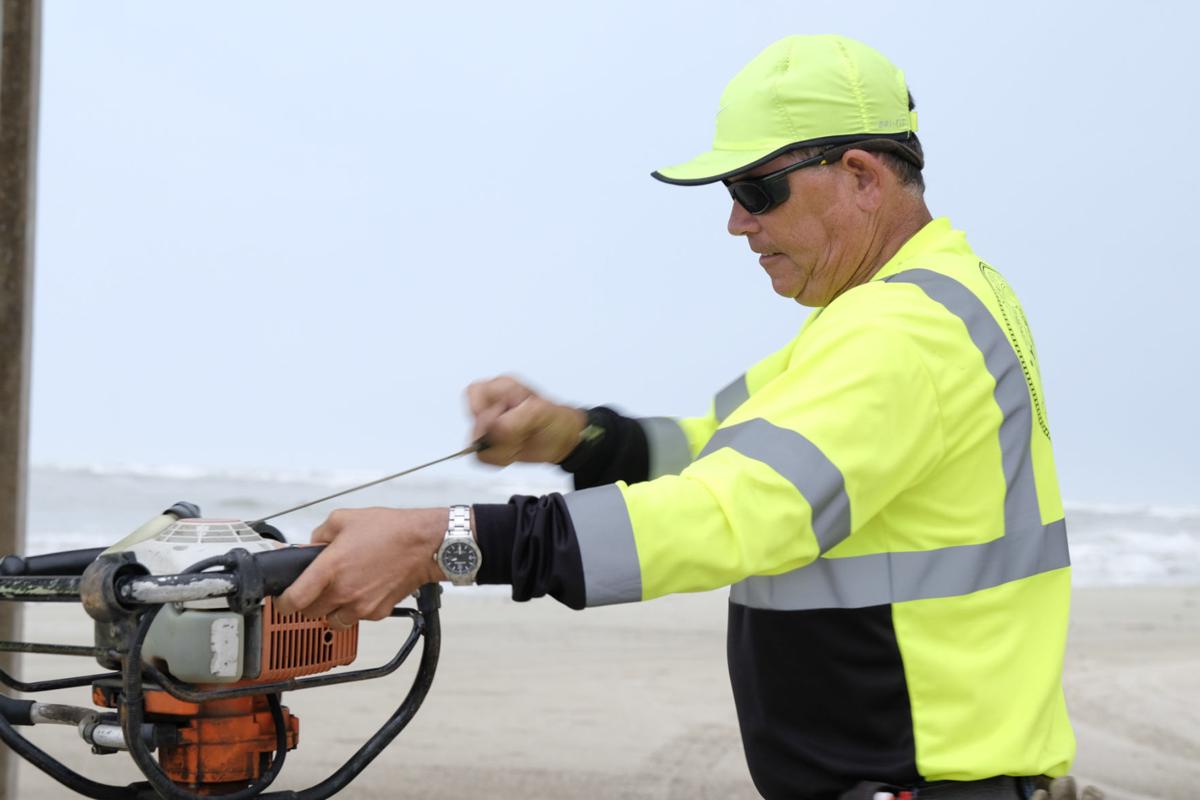 Winston Rossow starts a drill Thursday before using it to make holes in the sand for a new sign at San Luis Pass. The sign warns beachgoers about how 10 people have died there since 2013.

People fish June 29 at the San Luis Pass. Ten people have died there since 2013, including Jacob Szydlowski, 19, of Alvin, who died while wade fishing June 23.

Winston Rossow, left, and Jordan Alexander put up a new sign June 29 at San Luis Pass warning beachgoers about how 10 people have died there since 2013.

Jordan Alexander stands over the new sign Thursday at San Luis Pass warning beachgoers about how 10 people have died there since 2013.

Winston Rossow starts a drill Thursday before using it to make holes in the sand for a new sign at San Luis Pass. The sign warns beachgoers about how 10 people have died there since 2013.

Some of the deaths at San Luis Pass in recent years:

FREEPORT — Grey skies set a solemn backdrop as county employees hoisted a new sign warning visitors to San Luis Pass of the dangerous currents that lurk beneath the surface.

“If you look out here toward the bay, the water looks calm,” Brazoria County Sheriff’s Lt. Varon Snelgrove said. “It’s got a very nice, clean beach and the fishermen are drawn here because the fish are outstanding in this area. But it’s the currents below the surface that get people in trouble. I can’t stress how strong the currents here are.”

Brazoria County officials posted two new signs warning of 10 deaths that have taken place since 2013 in the narrow straight between Brazoria County and Galveston Island. One sign was posted at the San Luis Pass County Park entrance and another under the bridge Thursday afternoon.

“It’s not that we’re trying to shock or scare the public; we just want them to be educated of the dangers that this area actually poses — that 10 people have actually lost their lives,” Snelgrove said.

One of those deaths happened less than a week earlier when Jacob Szydlowski, 19, of Alvin went missing June 23 while wade fishing under the San Luis Pass bridge. A passing boater found Szydlowski’s body floating in the area the next day.

“Over my lifetime, I would estimate there’s been at least 50 drownings,” Payne said. “Most of the people that have drowned, especially in the last few years, are not southern Brazoria County residents. They won’t come out here and fish because they know of the dangers.”

Two men were wading in the waters Thursday afternoon as county employees posted the new signage.

“Another 4 feet, there’s a 9 foot drop-off,” Gulf Coast Rescue Squad member Chuck Courson said of how close those anglers were to a hidden, potentially deadly, danger.

“They change almost on a daily basis because of these extreme tidal changes; it’s constantly moving the sand,” he said. “Where you may be standing in knee-deep water yesterday, it might be over your head today.”

For those who don’t heed the new warning signs to avoid wading into the pass, Courson advises people to wear a life-jacket.

“That young man, I’m pretty confident, he would’ve been able to get back to shore eventually, safely if he had a life jacket on,” Courson said of Szydlowski’s death.

Officials hurried to update warning signs to alert residents of the treacherous waters, knowing a big holiday weekend followed the most recent casualty of the pass.

“It did prompt it,” Snelgrove said. “It’s something that we’ve actually been working on for awhile trying to make people aware of this. We just wanted to expedite it because we do have the upcoming holiday weekend. July Fourth is always a big beach weekend for people coming here from out of town and for our locals. We just want to make people aware before we have another tragedy.”

Officials also urge residents to watch for coastal weather alerts before heading out to the beach.

“When they hear the National Weather Service issue a rip current warning for our beaches, pay attention to those,” Snelgrove said. “They’re there for a reason.”

Aside from San Luis Pass, officials say the mouth of the Brazos River is another notorious spot.

“Those are the two areas along our reporting area that we find the most treacherous, and it’s because of the unpredictable currents,” Snelgrove said.

Updates on previously published stories in The Facts.

The locals would have already known just how dangerous the waters are but some are still defiant and would still want to conquer them, so the signs could change just that. Though not everyone would heed the advice being conveyed by the signs, but at least there will be a certain percentage of deterrence inflicted. Over time, people would come to realise that a few seconds of thrill-seeking are not worth their lives.

Simply want to say your article is as amazing. The clearness on your publish is just cool and i can suppose you are a professional in this subject. Fine together with your permission allow me to seize your RSS feed to keep up to date with forthcoming post. Thank you one million and please continue the enjoyable work.