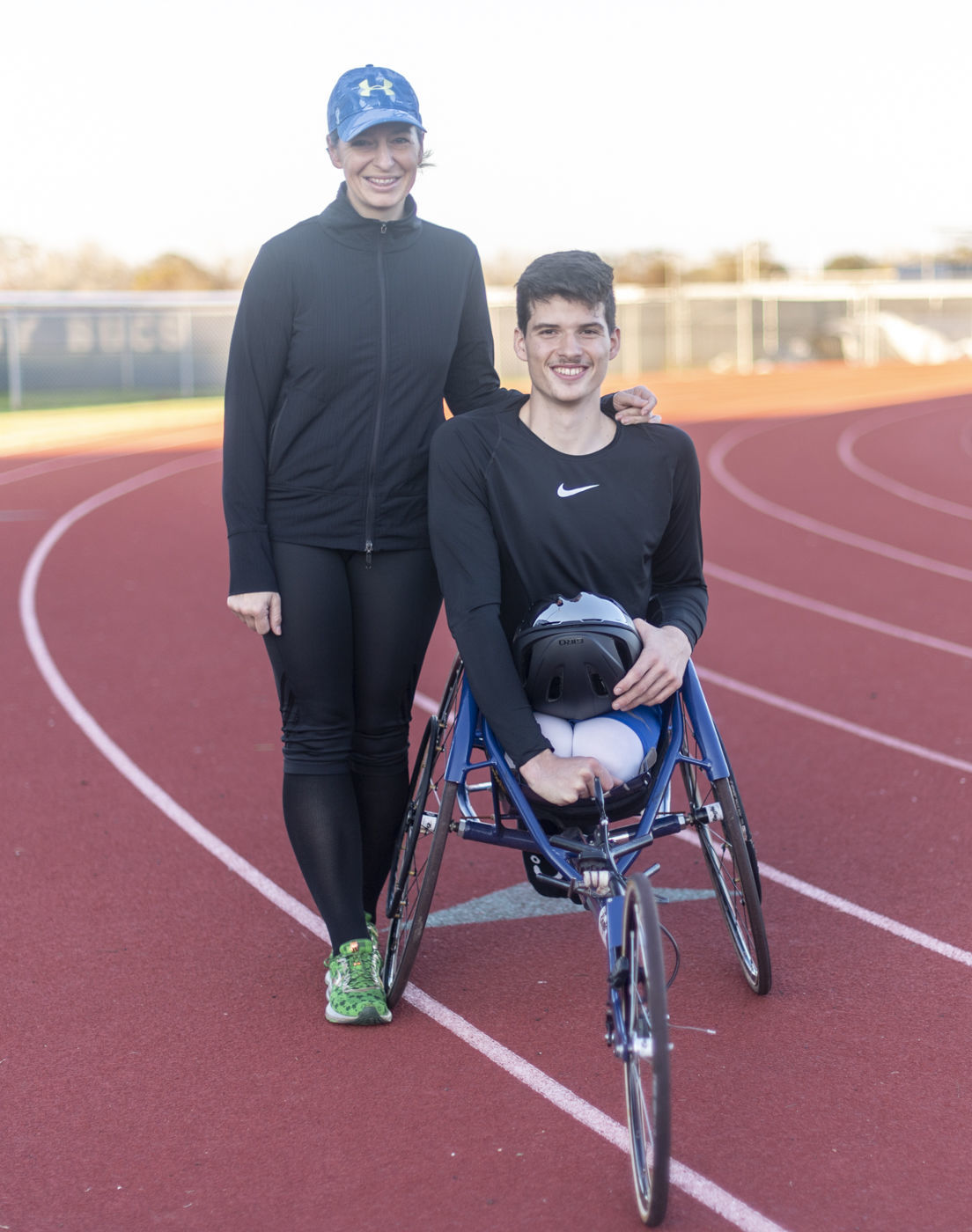 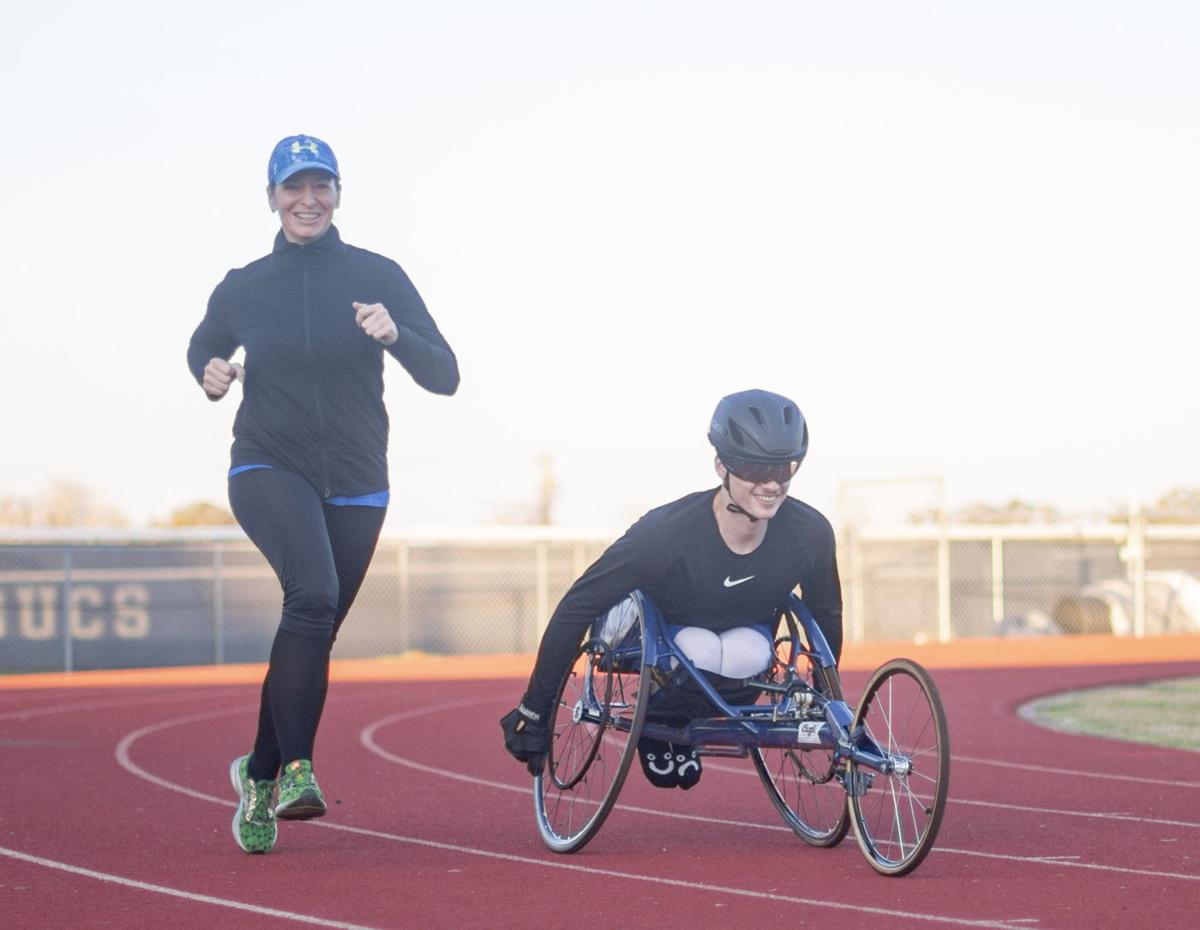 Bianca Stallberg and her 17-year-old son, Dustin, will compete together in the Houston Marathon this month. It will be the first full marathon for both. 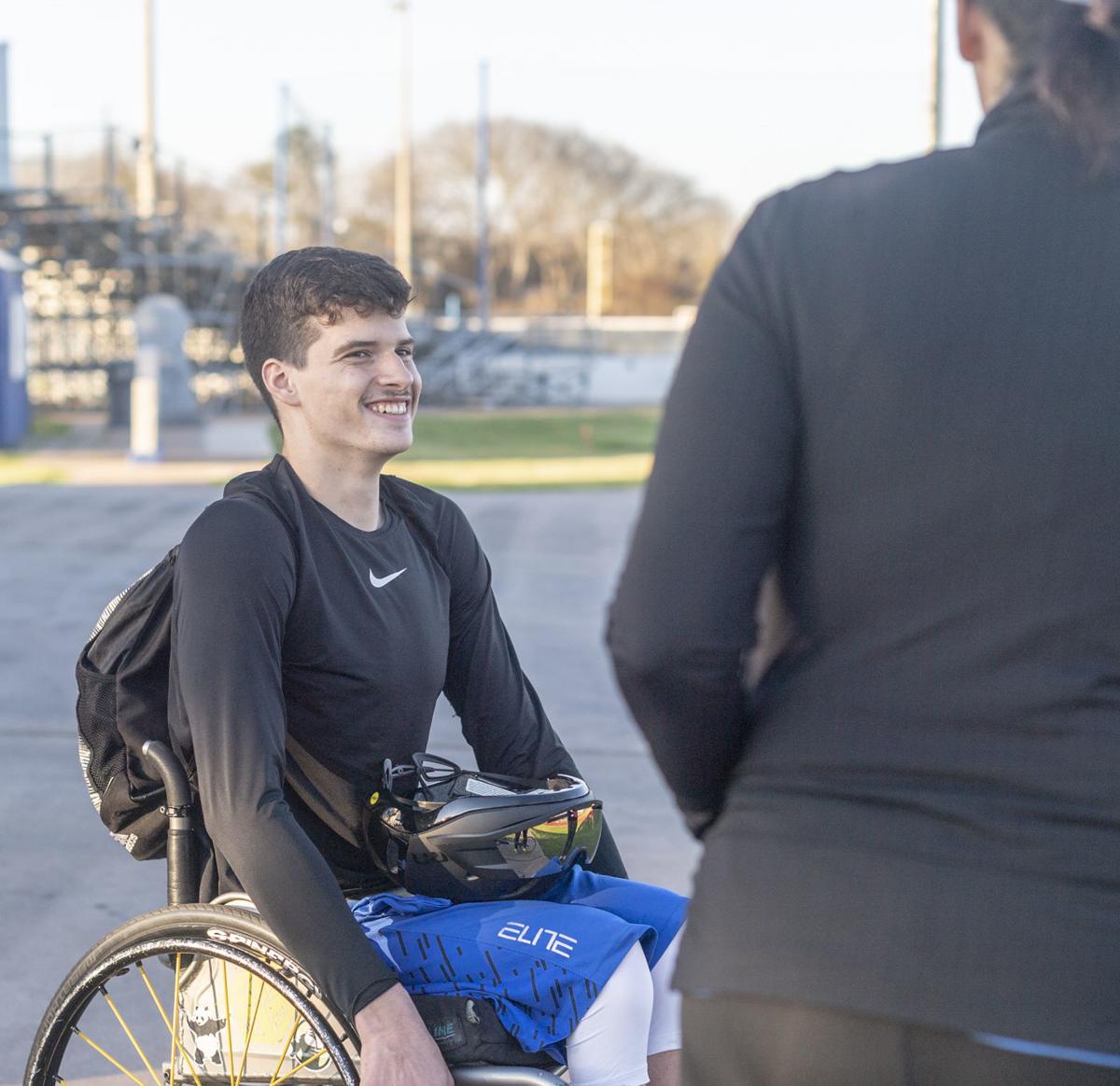 Dustin Stallberg, a state medal-winning track athlete for Brazoswood High School, initially resisted competing in road races until his brother challenged him to do a marathon. He will compete in the Houston Marathon this month alongside his mother, Bianca.

Bianca Stallberg and her 17-year-old son, Dustin, will compete together in the Houston Marathon this month. It will be the first full marathon for both.

Dustin Stallberg, a state medal-winning track athlete for Brazoswood High School, initially resisted competing in road races until his brother challenged him to do a marathon. He will compete in the Houston Marathon this month alongside his mother, Bianca.

CLUTE — In 2016, Bianca Stallberg took up walking around the block to become healthier both physically and mentally. Today, she and her son Dustin, 17, who was born with spina bifida and uses a wheelchair, are training together to run in the Houston Marathon this month.

Bianca’s second son ran a half marathon with her and later challenged Dustin to do the same. Dustin was already athletic, playing wheelchair basketball, and though he now does track and field for Brazoswood High School, he was not interested in distance events at first, Bianca Stallberg said.

It took the challenge from his brother to draw Dustin into it, and he completed his first half marathon in a basketball wheelchair, which was pretty incredible, Bianca said.

“It was a challenge, but I pulled through and got it done,” Dustin Stallberg said.

In December 2018, Bianca signed up for the Houston Marathon as a Christmas gift to herself, she said. However, she had some doubts about following through with it — until Dustin stepped up and offered to do it with her, she said.

They have both competed in multiple 5K races, and Dustin has done two half marathons while Bianca has completed five. This will be the first full marathon for both of them, they said.

“I’m not like an elite runner,” Bianca said. “I lost 45 pounds running, so for me it’s just kind of maintaining now. But of course we set this goal now, so we’re training a lot. But I was never on the top, getting medals and all that.”

They train together frequently, and Dustin tries to train every day, he said. It’s easier during school, due to scheduled early morning and after school workouts for track, he said. Lately, however, both Bianca and Dustin have had to adjust their training regimen to account for the weather, Dustin said.

“It’s a lot like for able bodies,” Bianca said of her son’s training schedule. Dustin often completes more miles at a time than she does, but they still visit the track together.

“When he did his 20 miles the other day, I just did four,” she said. “But tomorrow I’m doing my long run. So we kind of adjusted it.”

Dustin still plays wheelchair basketball, but for running, he now uses a track chair, which is more aerodynamic and allows him to go much faster, he said.

That difference in speed is helpful because Dustin always has a time goal he wants to beat, he said.

“A friend of mine got 2:06 in the Chicago Marathon so I want to try and beat that,” Dustin said of his goal for the Houston Marathon.

For her part, Bianca just wants to finish the 26.2-mile event, she said.

“I feel like it’s very, very interesting for myself what the body is capable of,” Bianca said. “I never thought I would be able to do anything like this. I never even thought I could run. Just like I never thought he could run with me. It’s just beyond my wildest dreams, really.”

The physical activity has positively affected her mental health, she said — which was why she began in the first place.

Even with a strong body and mind, running is not always easy, and there have been times when she’s felt like she just couldn’t do any more, Bianca said. The encouragement she and Dustin receive from each other and from other people has been very beneficial, she said.

“It’s been a really positive journey for us, especially all the people that we’ve met along the way,” Bianca said.

Once the journey to the marathon ends, Dustin plans to focus more on track and shaving his time on shorter distances for the state meet before graduating this year and heading to college. Bianca has a 200-mile bike ride coming up in the summer to raise awareness for spina bifida, she said.

Meanwhile, training for the Houston Marathon together gives Dustin and Bianca a lot of time to spend together before he leaves.

“It’s incredible bonding time and it makes it easier for me to let him go,” she said.