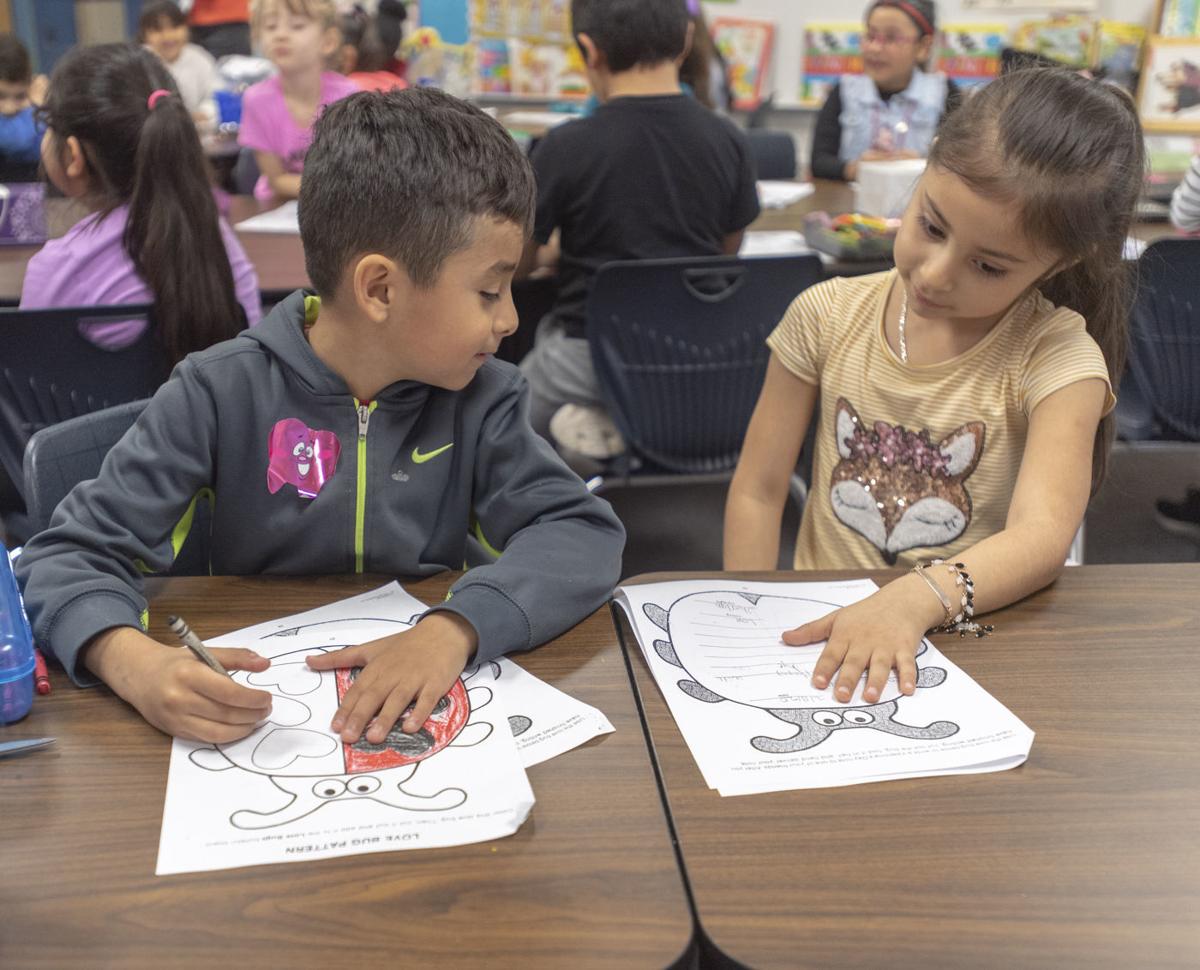 Angel Garcia, left, helps Sherlyn Jimenez spell a word as she writes a love letter to a friend Thursday for Valentine’s Day. 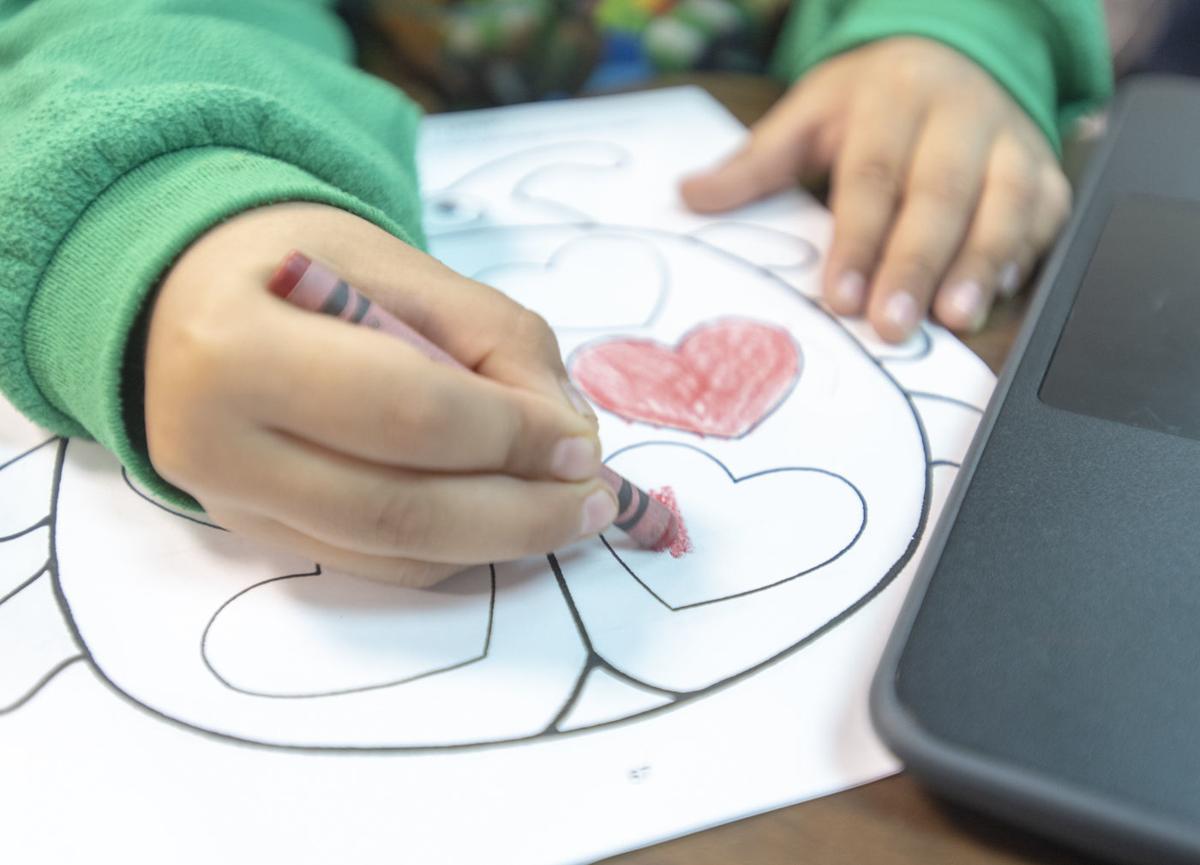 Douglas Lopez colors a picture of a love bug Thursday at Westside Elementary during a Valentine’s Day activity in his first-grade class. 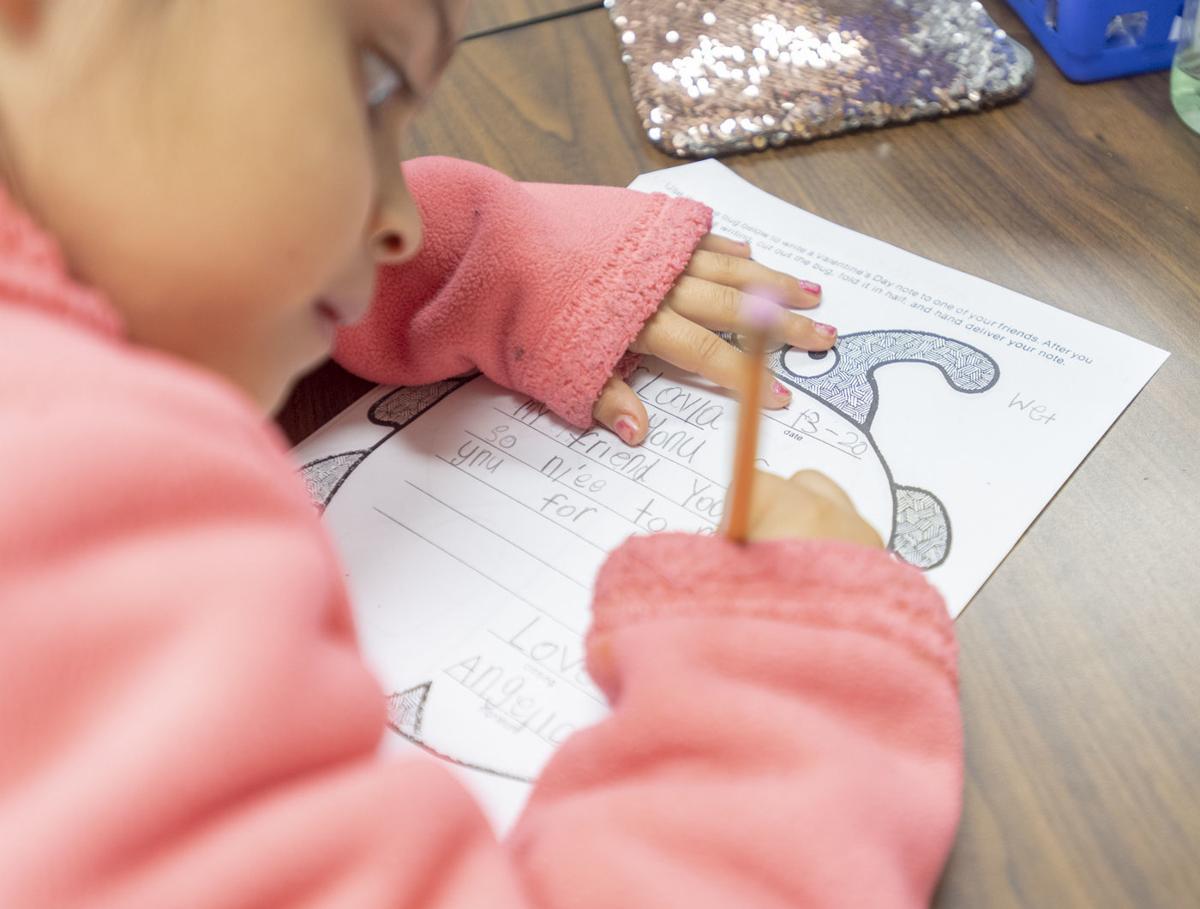 Westside Elementary first-grader Angelic Carbajal writes a letter to her classmate, Layla, thanking her for being her friend, during class Thursday. 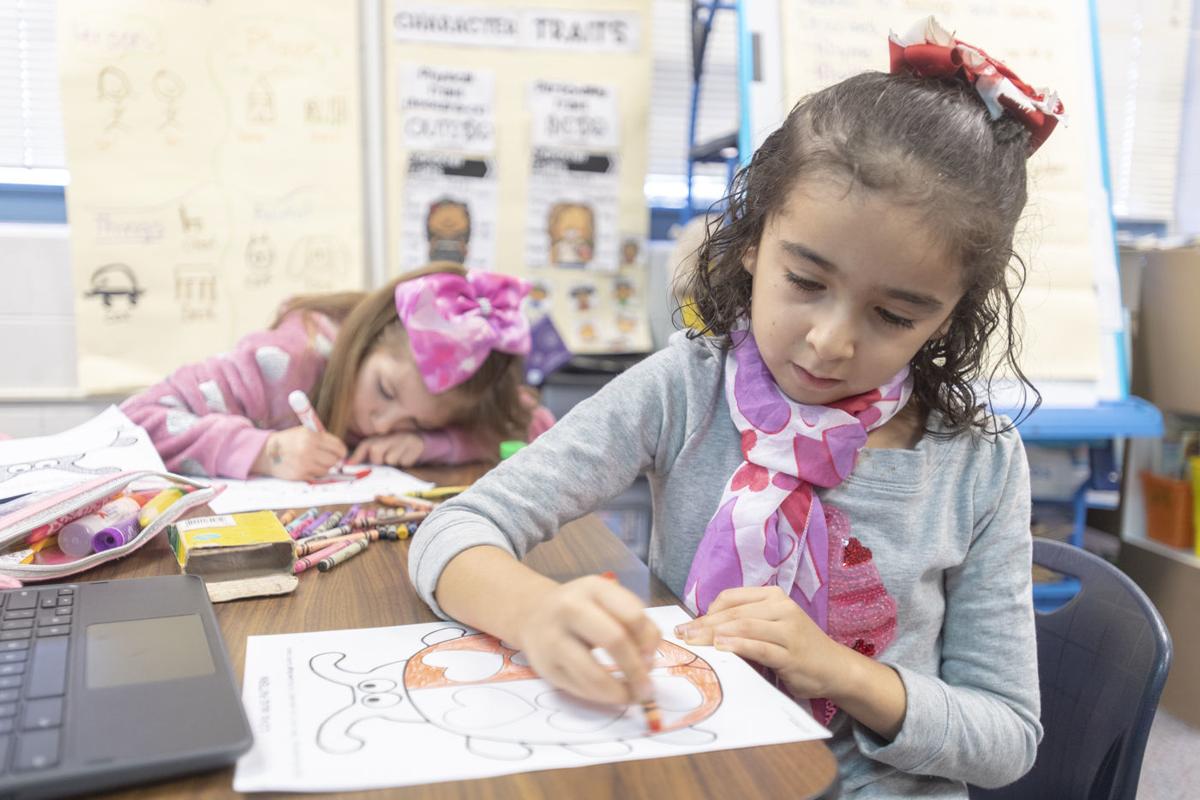 Mia Hall, right, and Khloe Gaolardo color Valentine’s Day cards for their loved ones Thursday during their first-grade class at Westside Elementary. 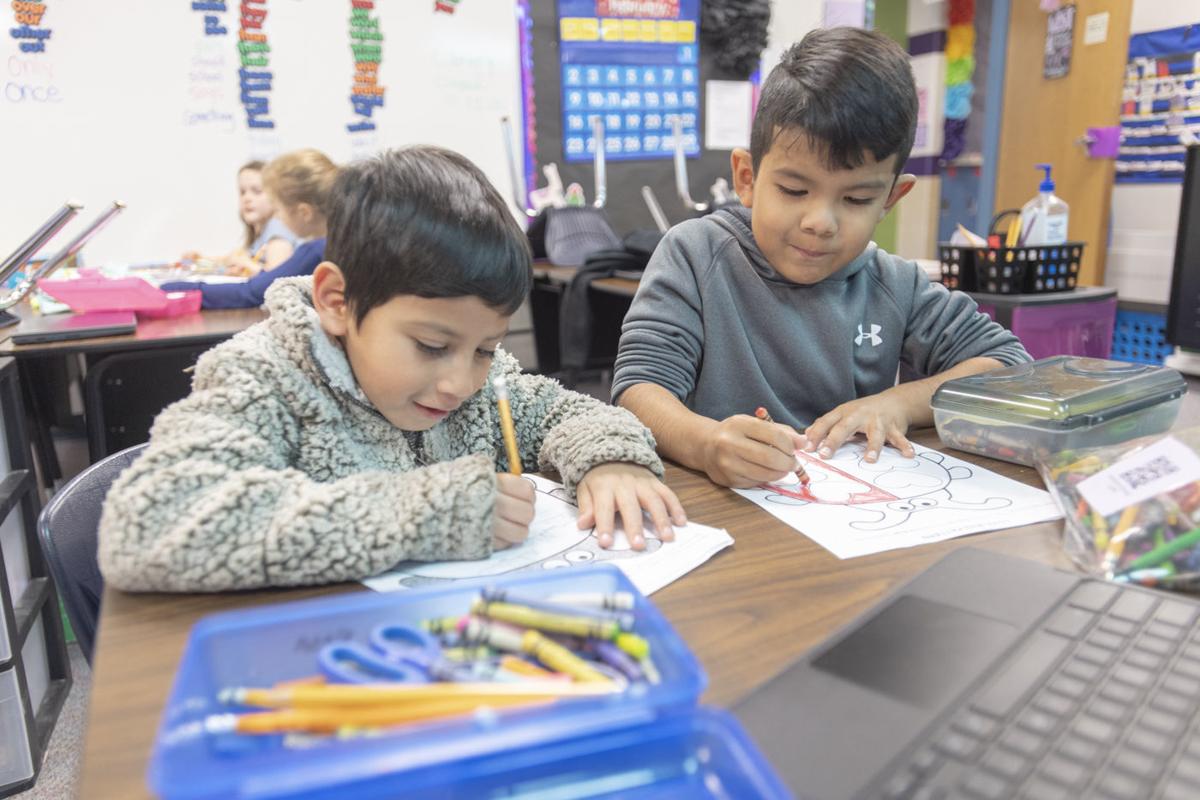 Angel Garcia, left, helps Sherlyn Jimenez spell a word as she writes a love letter to a friend Thursday for Valentine’s Day.

Douglas Lopez colors a picture of a love bug Thursday at Westside Elementary during a Valentine’s Day activity in his first-grade class.

Westside Elementary first-grader Angelic Carbajal writes a letter to her classmate, Layla, thanking her for being her friend, during class Thursday.

Mia Hall, right, and Khloe Gaolardo color Valentine’s Day cards for their loved ones Thursday during their first-grade class at Westside Elementary.

Love was in the air Thursday at Westside Elementary as Alice Perales and Joanna West prepared their first-grade class for Valentine’s Day. They colored love bugs and wrote sweet notes as they ruminated on the nature of love.

“Love means to like somebody,” Makenzie Deeley confidently explained.

On Valentine’s Day, she and her family make cards and sometimes she makes cakes with her dad, she said. She gives her parents lots of hugs and kisses, because they’re the people she loves most.

Katherine Ellisor also loves her family most, though she was a little more shy in saying so. In a soft murmur, she explained she gives them lots of hugs so they know. She’d rather celebrate the holiday with her family than anyone else in the world, she said.

“(We make) decorations and sometimes we have parties,” Katherine said.

Jahzarra Camri giggled and grinned as she talked about love. For her, love is hugging, and the very best person to hug is her brother. He’s her favorite person because he’s so nice to everybody.

“I like hugging people and that’s it,” she said, though she does something a little special for Valentine’s Day. “I put a heart on my brother, my family and my other cousins and my mom and dad. And then I go love and hug.”

Jazmin Mazano, busily engaged in coloring hearts all over her love bug, agreed love means hugs. She loves her mom the most, so on Valentine’s Day she’s going to give her mom a hug. Then they’re going to cook eggs to celebrate, she said.

Chancelorr Griggs was a little hesitant to talk about matters of the heart, but luckily he had pal Camron Benjamin to cheer him on. Whenever Griggs faltered, his bestie had his back.

“He goes to my day care, that’s why I know so many things about him,” Camron said.

Chancelorr said love is happiness, and the person he loves most is his brother. On Valentine’s Day they like to go fun places together, like somewhere to eat. Chancelorr prefers going to Urban Air with his very lovable mom, but agreed brothers are pretty great, too.

Next up was love expert Wyatt Ripple, who couldn’t wait to share his knowledge with the lovelorn public. Love is not merely when you like someone, he explained, though a lot of people make that mistake. It’s when you like someone so much. Wyatt hugs his parents to show his love, he said, and in return they give him a great Valentine’s Day.

Wyatt accused Jennifer Cedillo of copying when she said the people she loves most are parents, but since she loves her parents best, not his, it was eventually accepted as an original answer. She likes to show her love by doing chores, and though she’s not sure what her family will do for Valentine’s Day, she’s pretty sure they’ll love each other while they do it.

Emely Contreras couldn’t pick one or even two people she loved most. She chose her mom, dad and sister. But she said love is also when you love your friends and they love you, which makes it even harder to choose just a few people.

“When I give them kisses, I hug them, and I be nice to them,” is when she shows love, Emely said. “Sometimes we go to eat and sometimes we do cards for our friends.”

Ian Delcampo wasn’t sure what the definition of love is, but he knows it’s what he feels for his mom and dad. If he could, he would like to throw a big party. He would have a bounce house, a slide and a pool so everybody he loves could play.