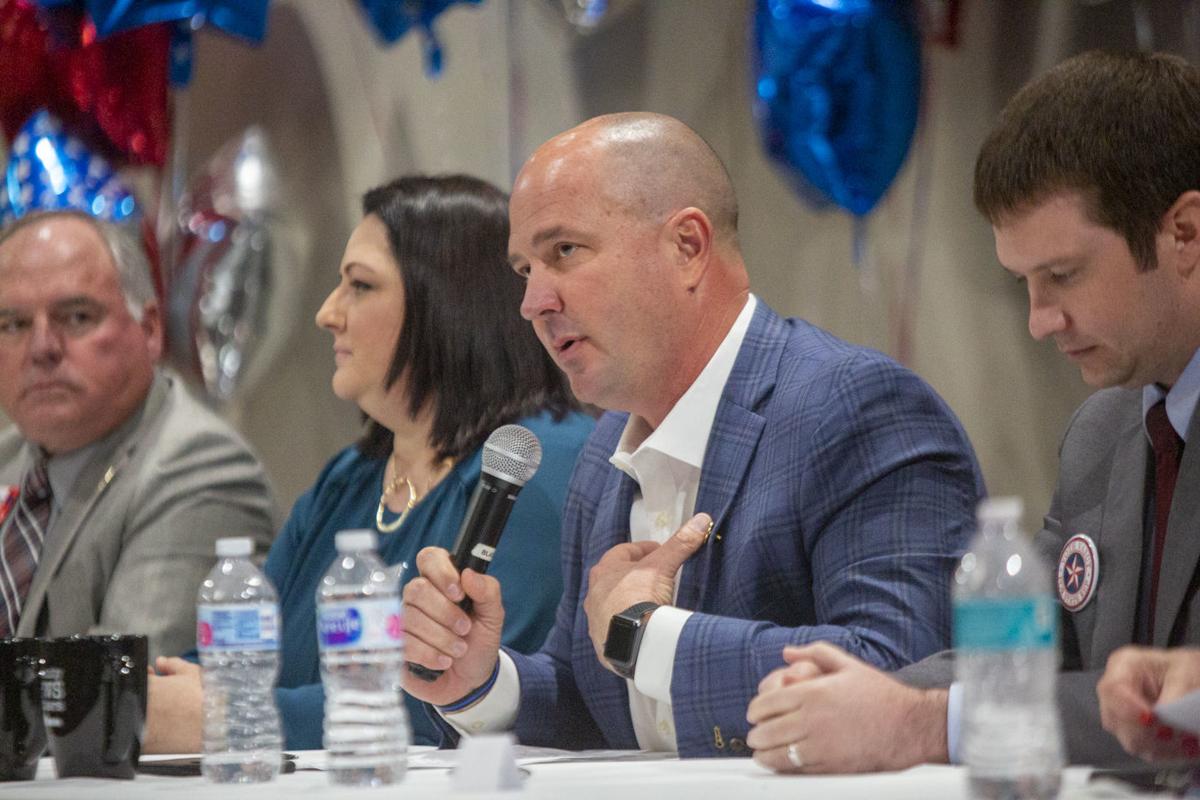 Freeport Mayor, Troy Brimage states Tuesday at The Facts’ Forum that he is running for the House District 25 representative in order to fix problems. 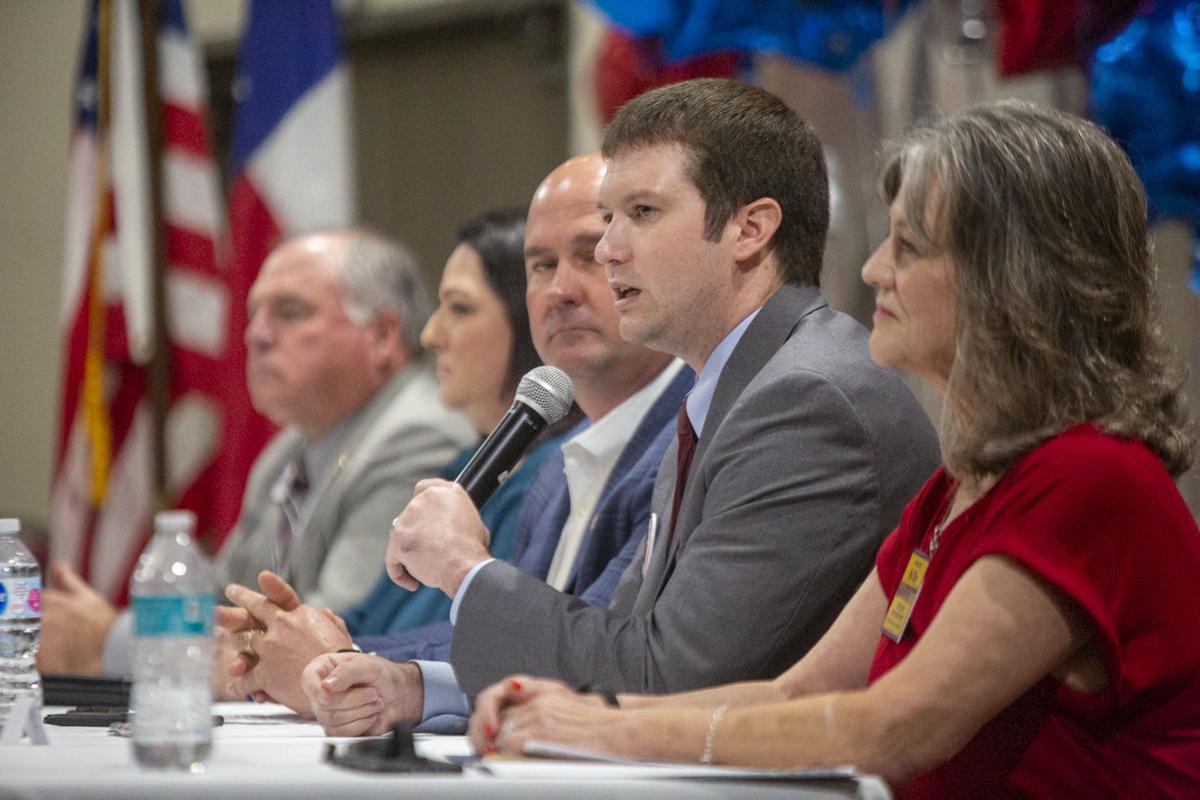 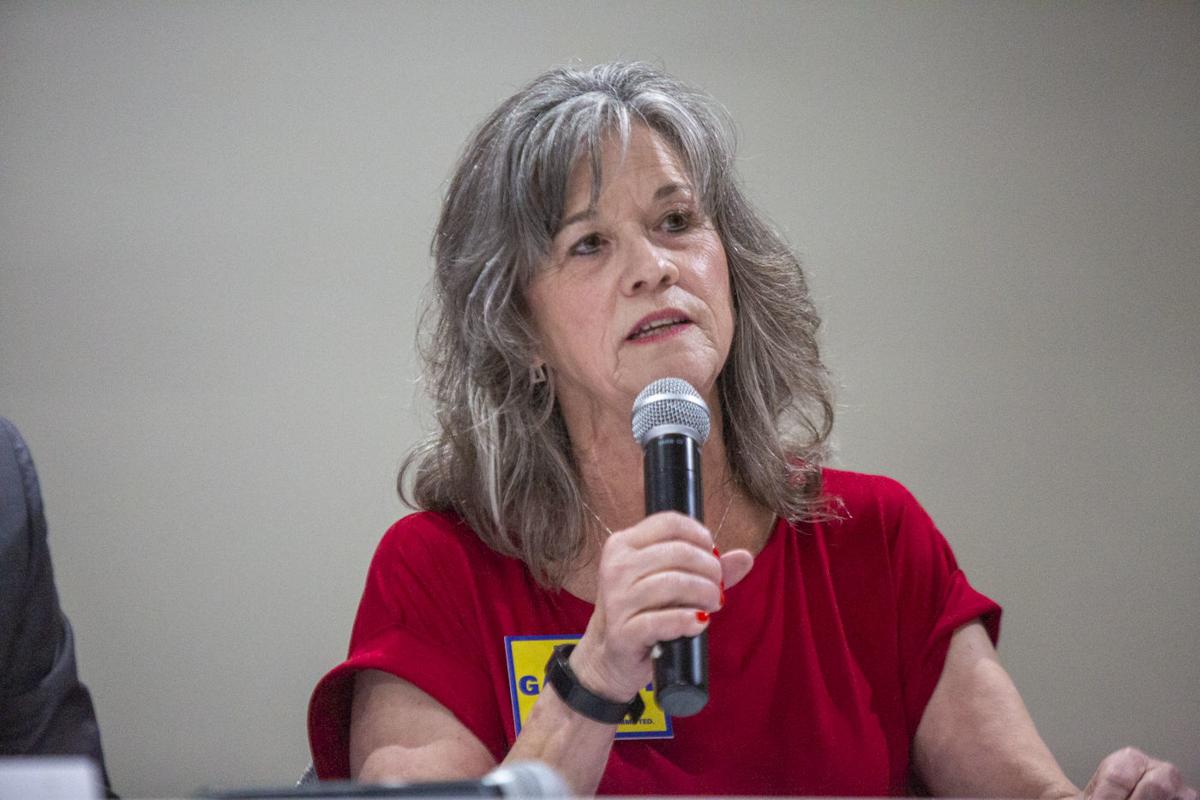 Ro’Vin Garrett voices her opinion on why she should be voted for the House District 25 representative on Tuesday at The Facts’ Forum in Lake Jackson. 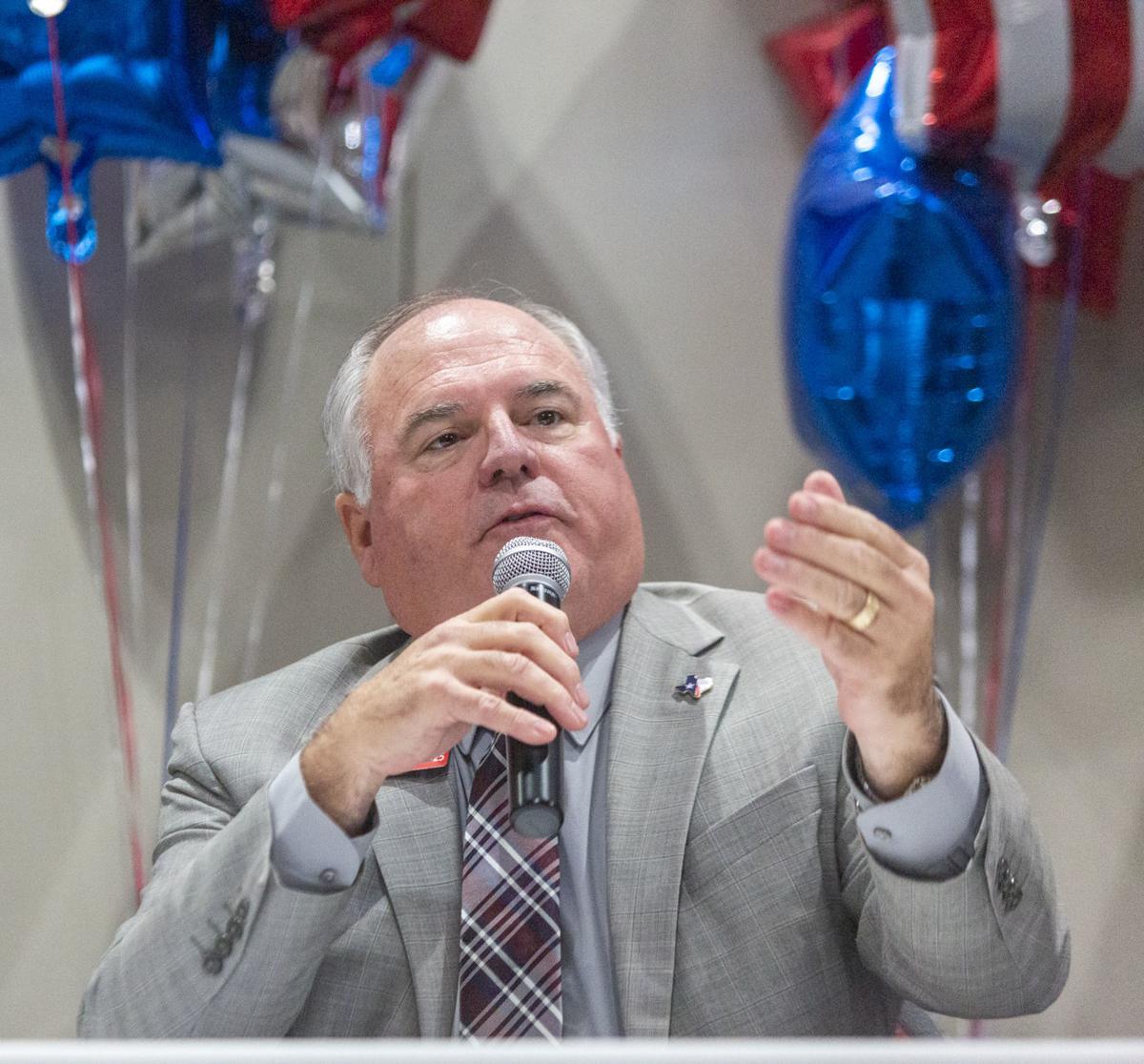 Mitch Thames, a candidate in the running for House District 25 representative, answers a question submitted by a Facts’ reader Tuesday at The Facts’ Candidate Forum held at the Lake Jackson Civic Center. 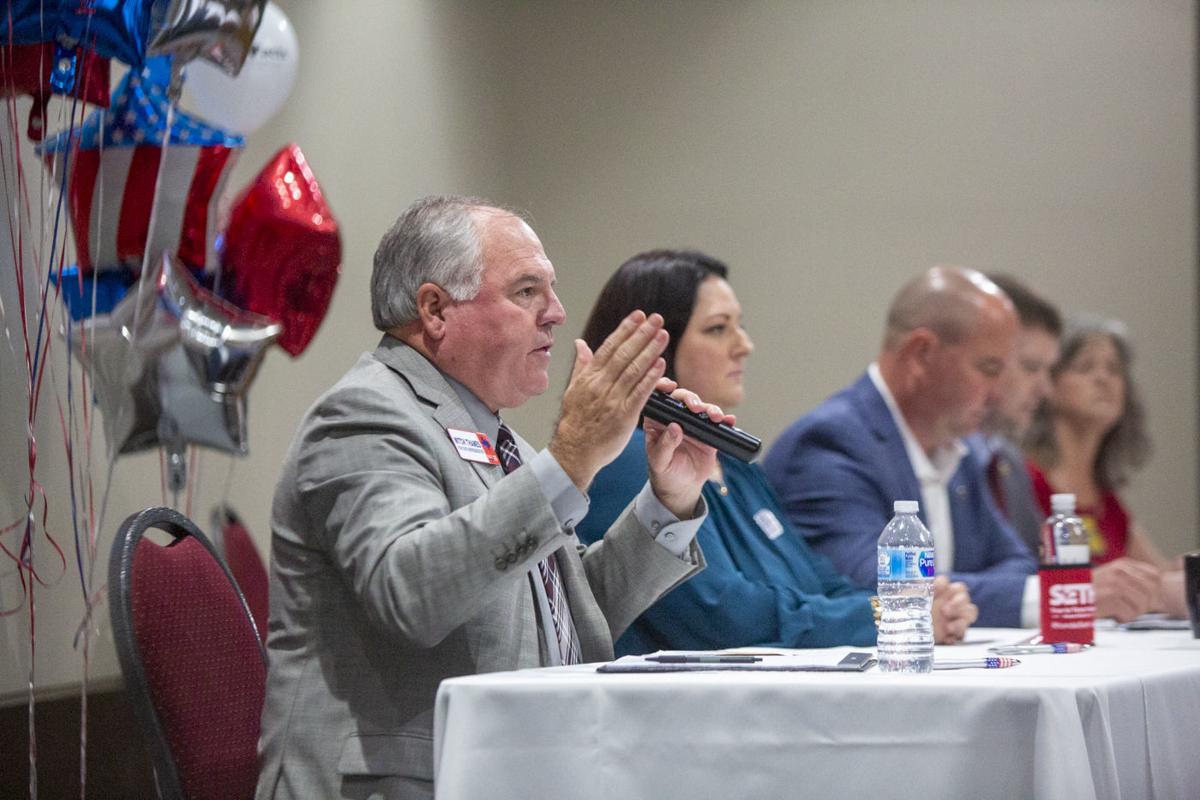 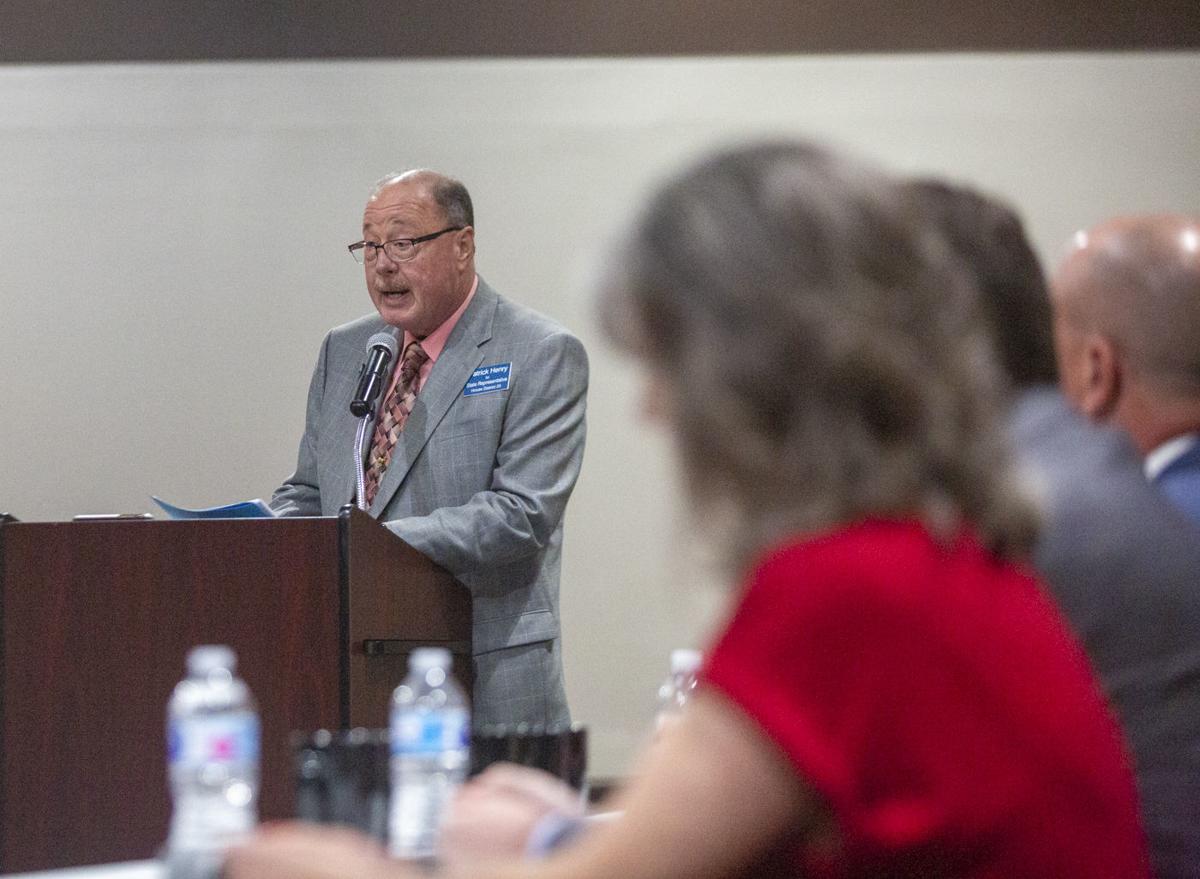 Freeport Mayor, Troy Brimage states Tuesday at The Facts’ Forum that he is running for the House District 25 representative in order to fix problems.

Ro’Vin Garrett voices her opinion on why she should be voted for the House District 25 representative on Tuesday at The Facts’ Forum in Lake Jackson.

Mitch Thames, a candidate in the running for House District 25 representative, answers a question submitted by a Facts’ reader Tuesday at The Facts’ Candidate Forum held at the Lake Jackson Civic Center.

In response to what Facts Editor and Publisher Yvonne Mintz said were some of the most popular reader-submitted questions, House District 25 candidates Troy Brimage, Ro’Vin Garrett, Rhonda Seth, Mitch Thames and Cody Vasut all said they are not supported, financially or otherwise, by conservative activist group Empower Texans or Speaker Dennis Bonnen.

Mintz asked what decisions should be made by local taxing entities versus the state, which a reader submitted in response to a legislative trend to lessen local control.

Thames believes the real problem is the increasing property value each year, he said. There is a standard in Colorado that requires a property’s value to stay the same for five years after it is purchased, Thames said, adding that seems like a good way to handle it.

Decreasing federal government overreach and spending would be Seth’s first solution, and something she would take a hard look at, she said.

“Let’s stop spending so much of the hard-earned taxpayer money,” Seth said. “I’m for less spending and (more) local control.”

Brimage said as a former mayor and school board member, he absolutely supports local control. Austin does not know what goes on in District 25 and should share more of a burden of expenses, Brimage said.

Texas property taxes are the third-highest in the country, he said. The state should control spending and share more of a burden, Brimage said.

Vasut believes in local control of issues including drainage and streets, Vasut said, adding it can be abused at times.

There are liberals moving into Texas and trying to take away private property rights, he said. Vasut feels laws that automatically trigger elections if taxes are raised by a certain percentage threshold are not taking away local control, but empowering individuals.

Garrett believes in limiting government and that the state does not need to micromanage entities, she said.

As the county’s tax assessor and collector, she advocated for the Commissioners’ Court to give real taxpayer relief, Garrett said. They took the advice and lowered the burden on county taxpayers significantly, she said.

The tax revenue increases that happen when a tax rate stays the same or is lowered but increased property values produce more revenue shows truth in taxation, Garrett said.

Garrett was the only candidate to say she would be “open to a dialogue” regarding using public money to fund private schools, depending on what requirements that would bring.

She is not against charter schools, vouchers or a parent wanting to send a child to the school best suited for them, but there have to be further questions about the proper way to implement those things, Garrett said.

Vasut believes in the inherent right of every parent to decide how and where their child is educated, but public money going toward homeschooling, Christian schools and other private options would also open the door to government control, which is likely not what they want, he said.

Public money should go toward making Texas public schools better, and he would support a voucher that only allows someone to keep their own money, Vasut said. He believes in public schools and school choice, he said, adding the issues are not mutually exclusive.

Brimage said he and his children are products of public education and he will continue from any position to put public schools first. He does not believe in using public money for private schools, Brimage said.

Seth wants to get rid of standardized testing in Texas classrooms, she said. The focus should be on driving dollars into classrooms and letting the teachers teach, Seth said.

She does not support public money for private schools, she said.

Especially in rural areas, there are not many opportunities for students besides public schools, Thames said, adding that “we have to take care” of them.

He believes in properly supporting retired teachers and building public schools up, Thames said. He questioned what would happen if one day there are no teachers to teach children.

Patrick Henry, the lone Democratic candidate vying for the House seat, announced he would address the questions presented to candidates on Facebook.

The turnout The Facts Candidate Forum Tuesday shows how engaged the community is with the upcoming Primary Election, Editor and Publisher Yvonne Mintz said.