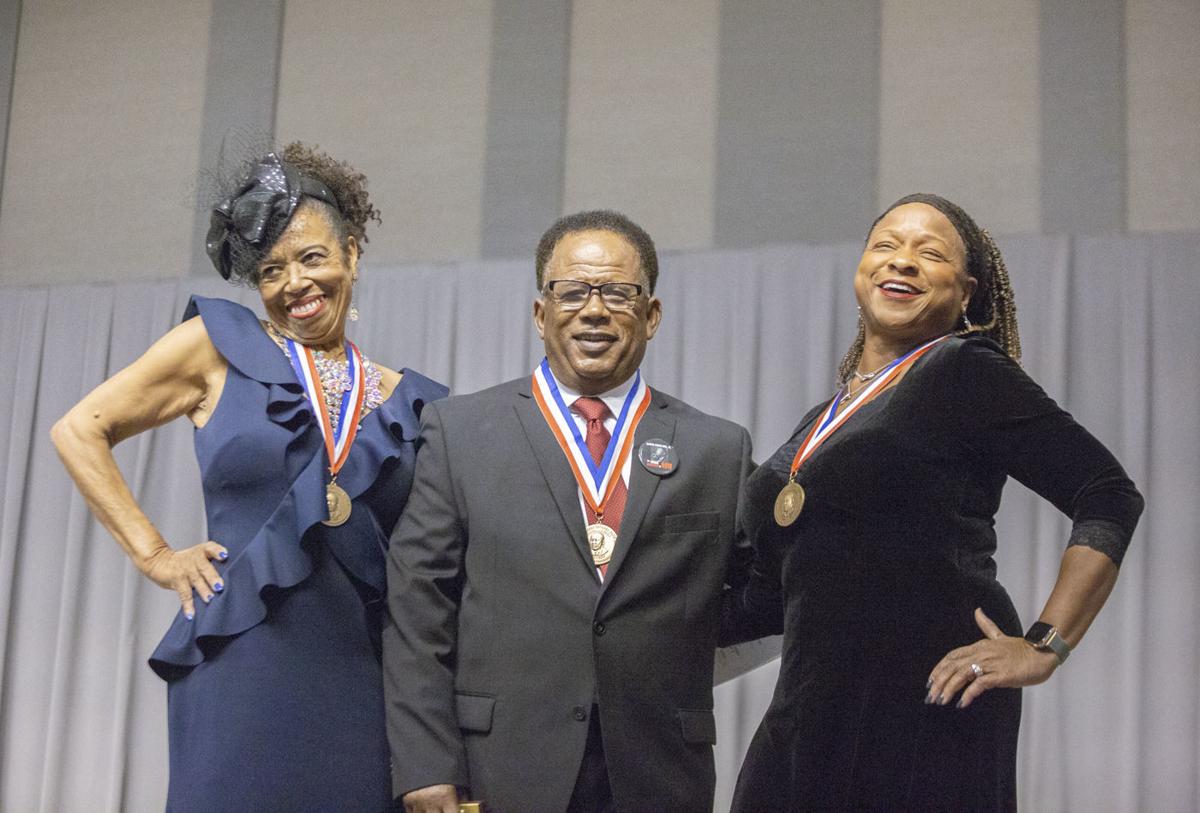 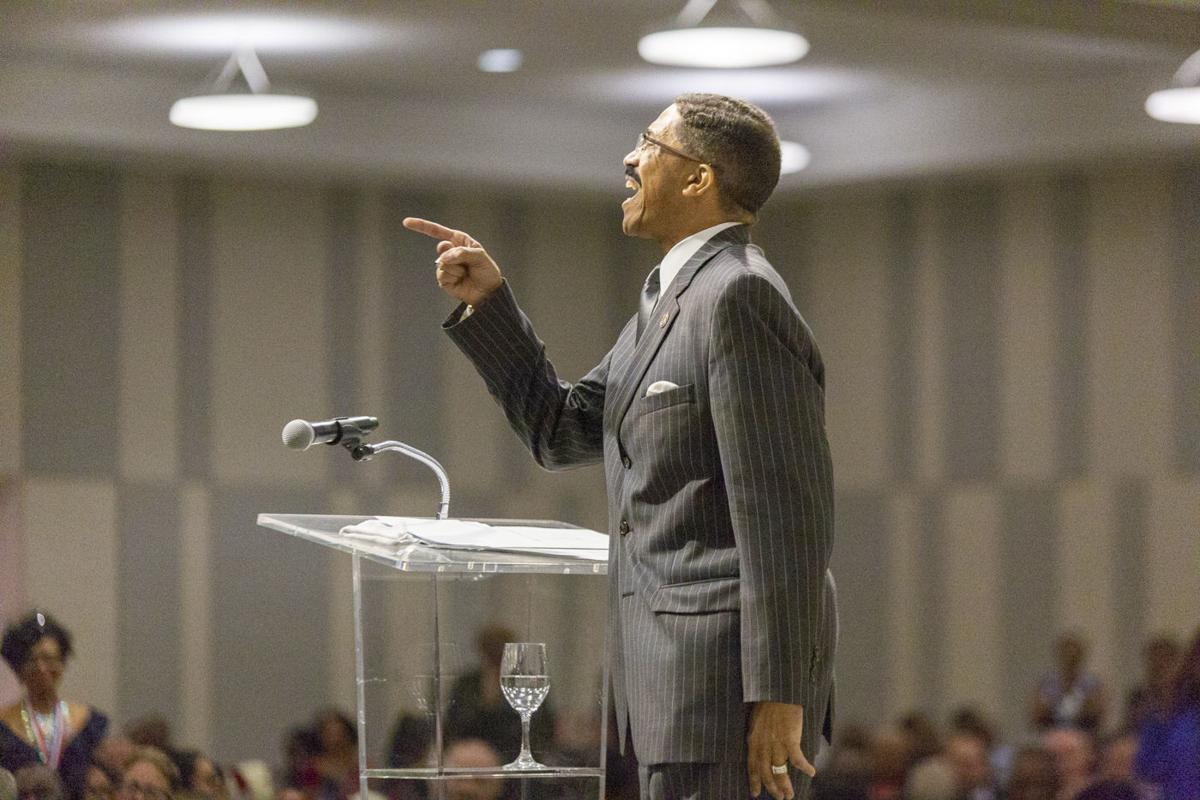 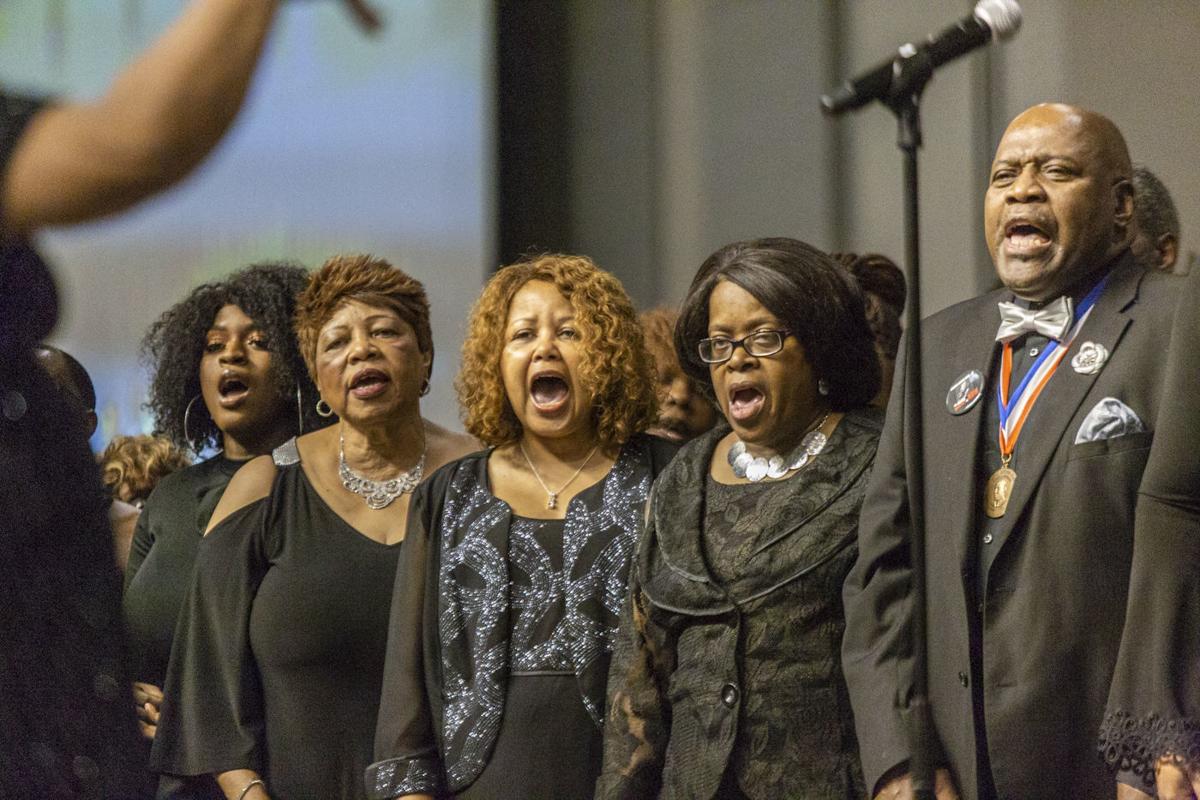 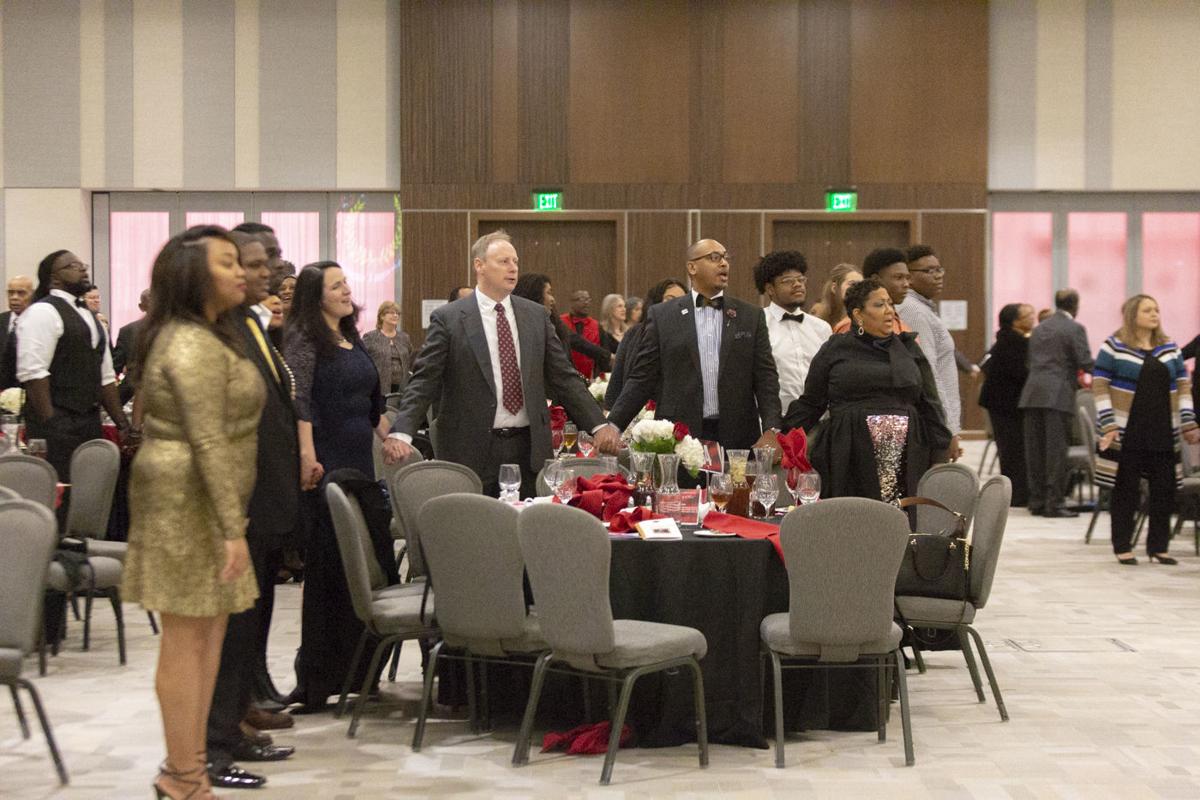 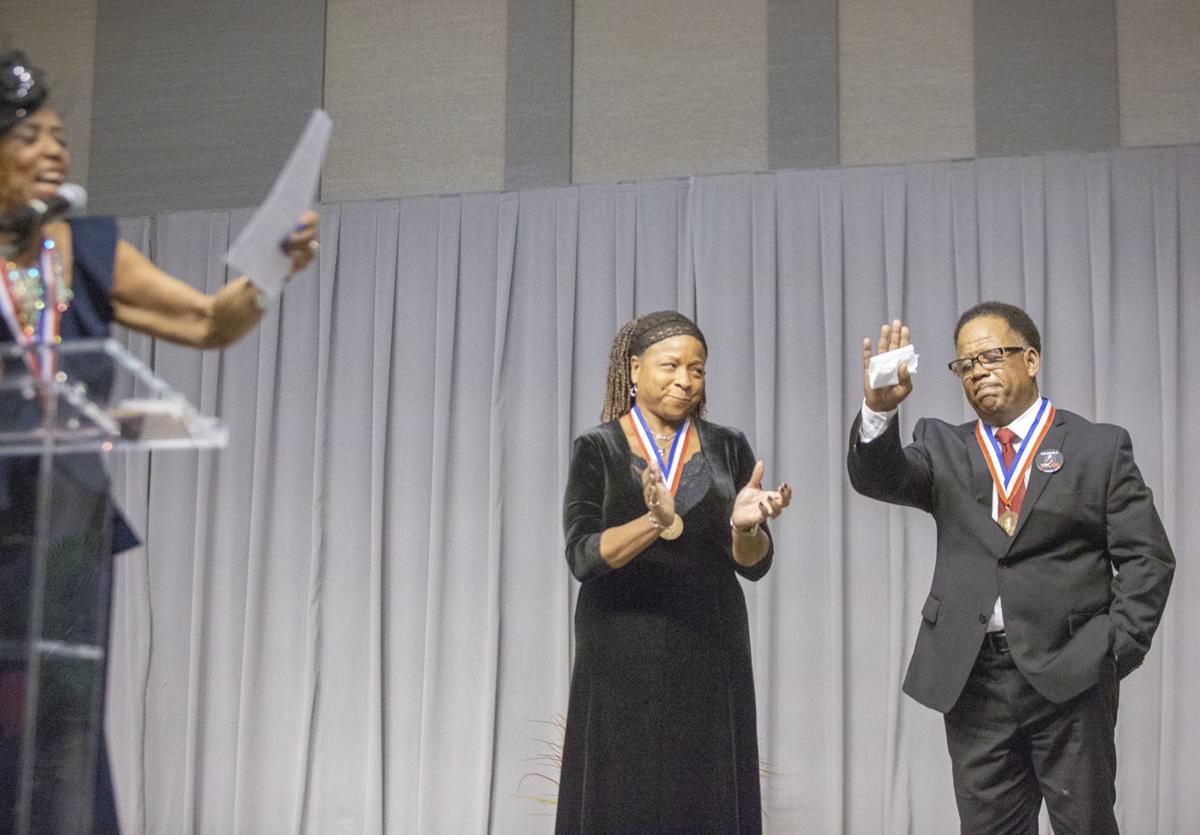 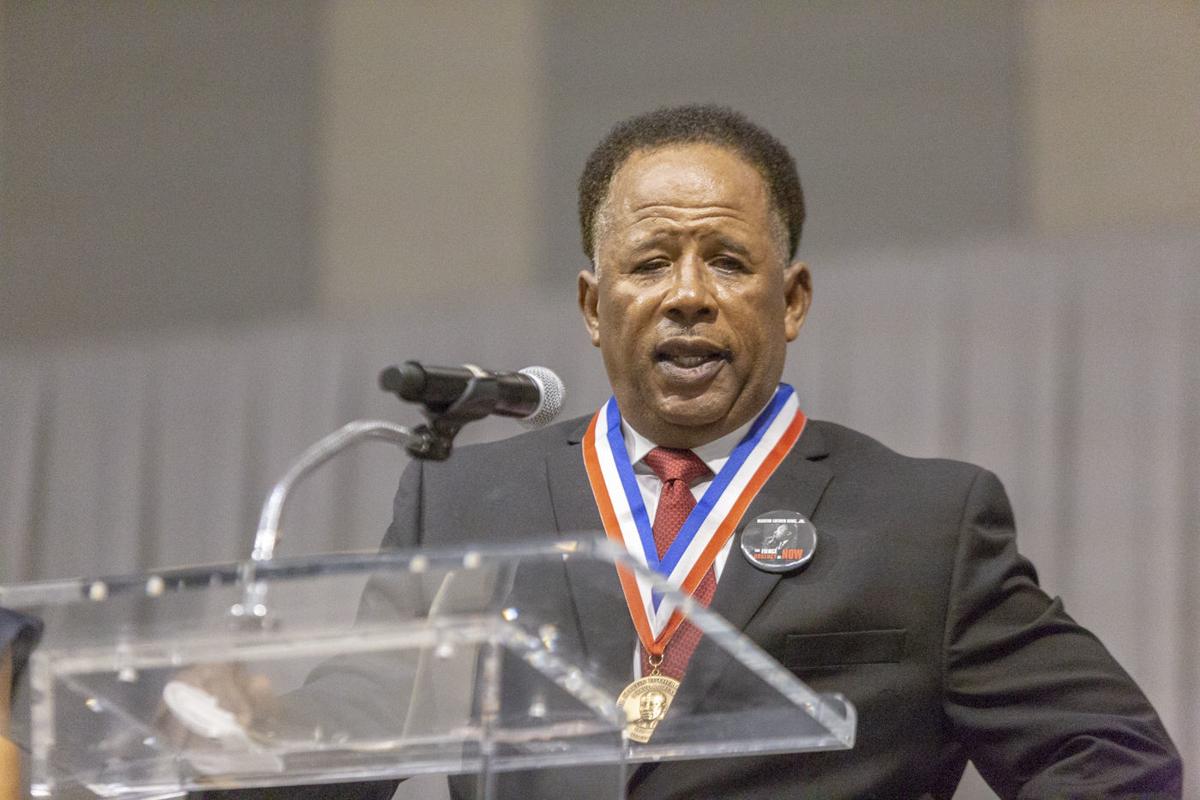 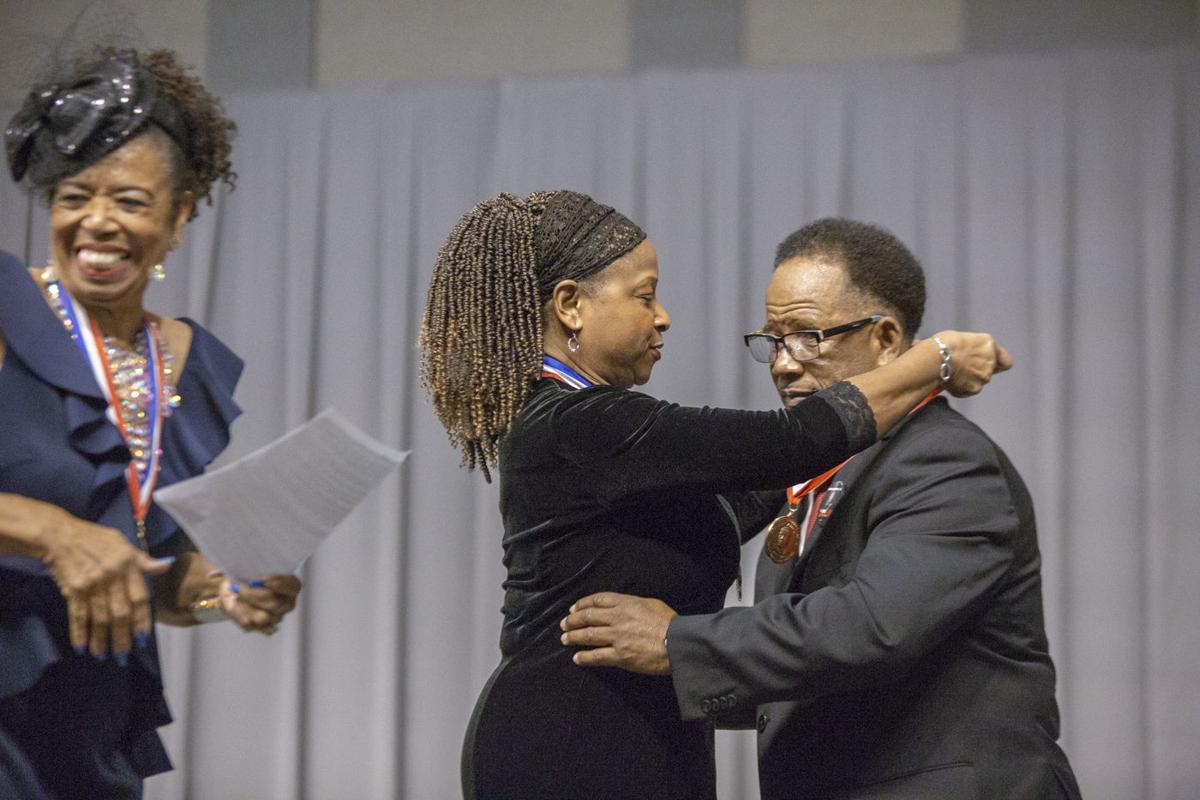 Sharon Barnes presents Phil Robertson with a Drum Major Award on Saturday at Brazosport College, where he works as a Disability Services Counselor. 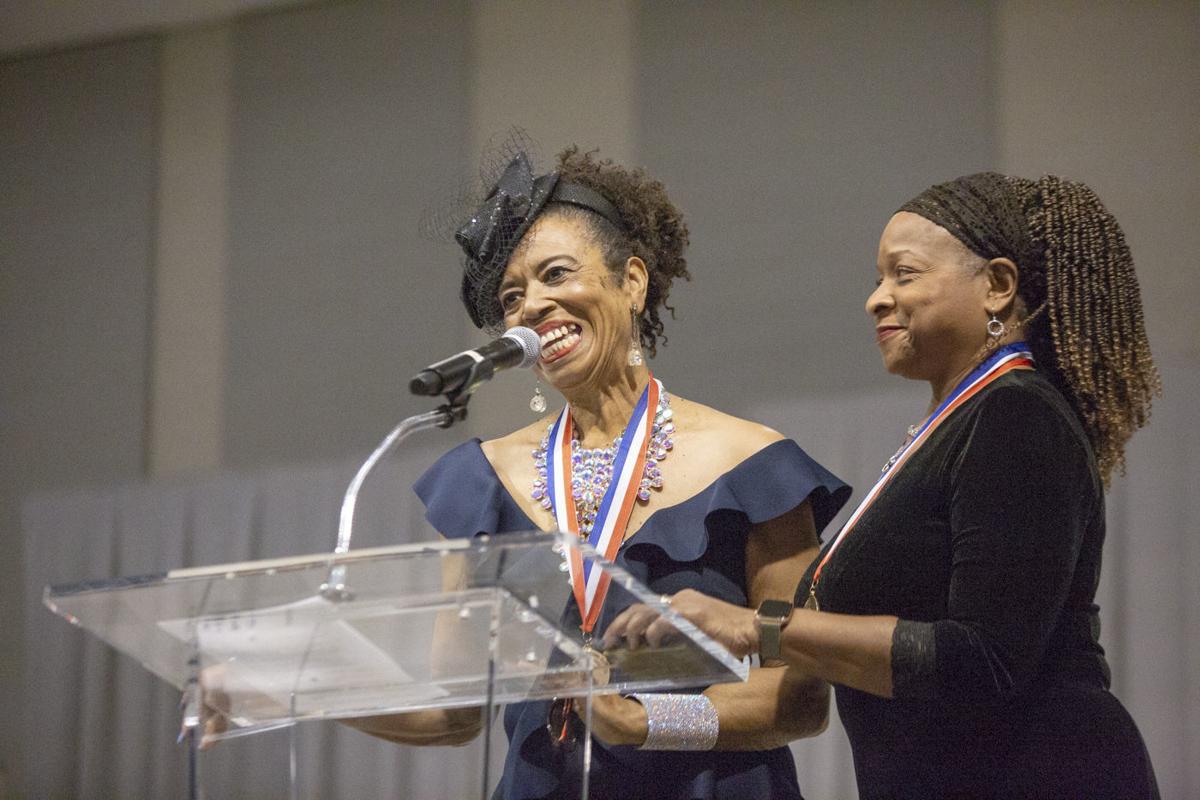 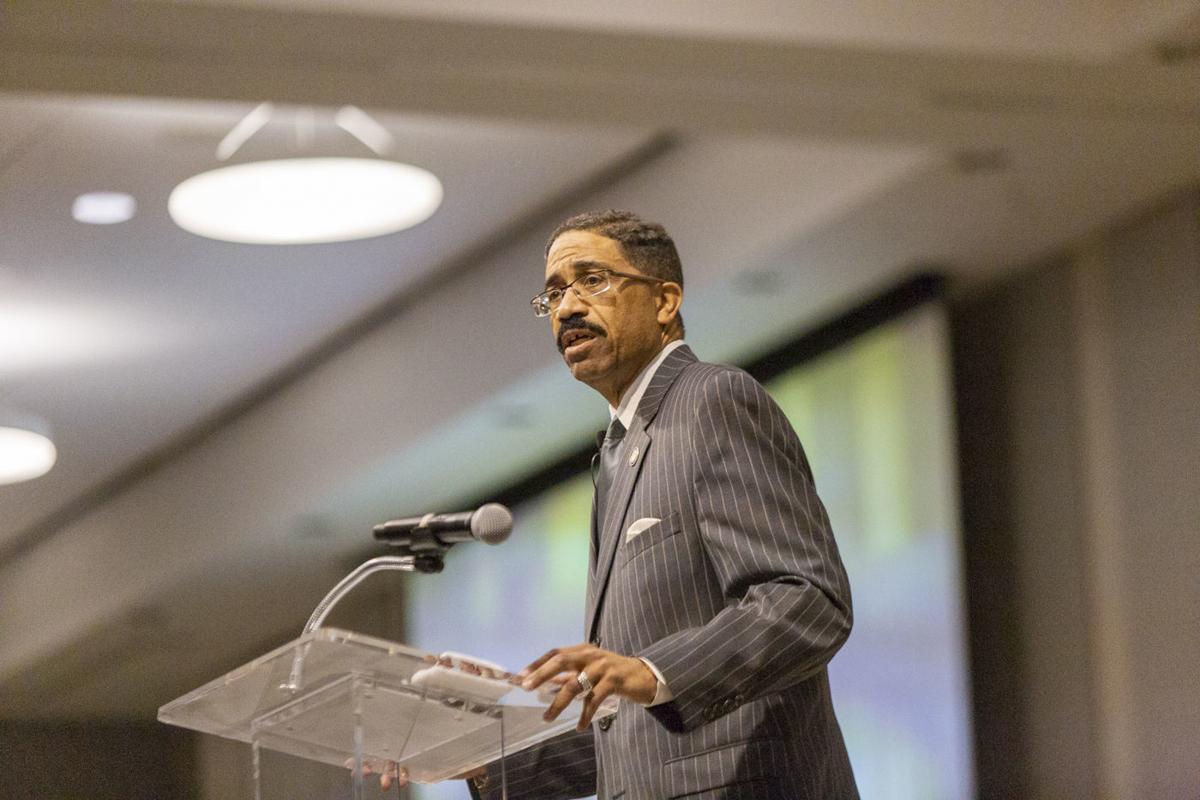 Justice Michael Morgan of the North Carolina Supreme Court spoke Saturday evening about Martin Luther King Jr.’s campaign for justice and equality through nonviolence and civil disobedience. He mentions that presently, there is a striking resemblance to that of 1963.

Sharon Barnes presents Phil Robertson with a Drum Major Award on Saturday at Brazosport College, where he works as a Disability Services Counselor.

Justice Michael Morgan of the North Carolina Supreme Court spoke Saturday evening about Martin Luther King Jr.’s campaign for justice and equality through nonviolence and civil disobedience. He mentions that presently, there is a striking resemblance to that of 1963.

Dr. Martin Luther King Jr. always spoke about the importance of moving forward. While a lot has been accomplished to bring about racial equality and justice, there is still much to be done today, a message reinforced to the hundreds of attendees at an annual banquet celebrating King’s legacy.

“What he did was such a good thing. He didn’t have any hatred,” Lovie Phillips said.

The banquet serves as a way to bring community members together, she said.

In her opening speech, Houston attorney Monica Rawlins spoke about how the MLKCC has demonstrated Brazoria County has a spirit of urgency.

“The committee formulated three objectives in continuing the legacy and the dream of Dr. King,” Rawlins said. “They are to enhance the awareness of Dr. King’s contributions to all mankind; to expand upon fulfilling and extending all facets of Dr. King’s dream; and to recognize and honor this national holiday.”

Since the committee formed more than 30 years ago, each of those objectives has been realized through different means, including the commemorative program, Rawlins said.

If you’re aware of the history of King, he always spoke about such challenges, she said.

“As we talk about it and as we work on this ‘fierce urgency of now,’ we’re gonna make this world a little bit better,” Thomas said. “We’re going to go ahead and march forward and accomplish those things.”

King wanted to be remembered not for his accomplishments, but for all he tried to do to serve other people.

In keeping with that, each year the MLKCC recognizes an individual who has best exemplified those ideas, and this year’s honoree “embodies all three,” Theresa Jackson said in introducing recipient Phil Robertson, disability services counselor at Brazosport College.

Brenda George, founder of suicide prevention program S.T.O.P., and La’Mond Antroi Hall, founder of the Brazoria County League of Extraordinary Gentlemen mentoring program, received special recognition from the MLKCC for outstanding service to and engagement in the Brazosport community, and having made a difference.

Keynote speaker Justice Michael Morgan of the North Carolina Supreme Court spoke about the difference Martin Luther King, Jr. made — and how there is still more for us to do.

“The general, the leader, the drum major for justice was the Rev. Dr. Martin Luther King Jr.,” Morgan said.

Morgan spoke about how King’s campaign for justice and equality through nonviolence and civil disobedience, and showing love in the heat of hate, brought about nationwide social change. The laws of racial discrimination came down, and the opportunities for a downtrodden people went up, Morgan said.

However, in 2020, there is an alarmingly striking resemblance to the atmosphere of 1963, Morgan said.

“We’re living in serious and dangerous times,” Morgan said. “Racism is raging, hate is heightening, intolerance is intensifying, bigotry is building and prejudice is proliferating.”

The difference between the two eras, he said, is in the 1960s, acts of hatred and prejudice tended to happen in secrecy. Today, on TV and on social media, the racism and bigotry are blatant, “24/7/365,” Morgan said.

“The historians said people who don’t know their history are bound to repeat it.”

Something Morgan has learned throughout his travels is people are fundamentally the same everywhere, with the same problems and issues, the same dreams and fears, he said.

“There is more that unites us than separates us. Dr. King’s enduring legacy, even 52 years after his death, brings us to this place tonight to remind us of the strength of the common bonds that we all share,” Morgan said.