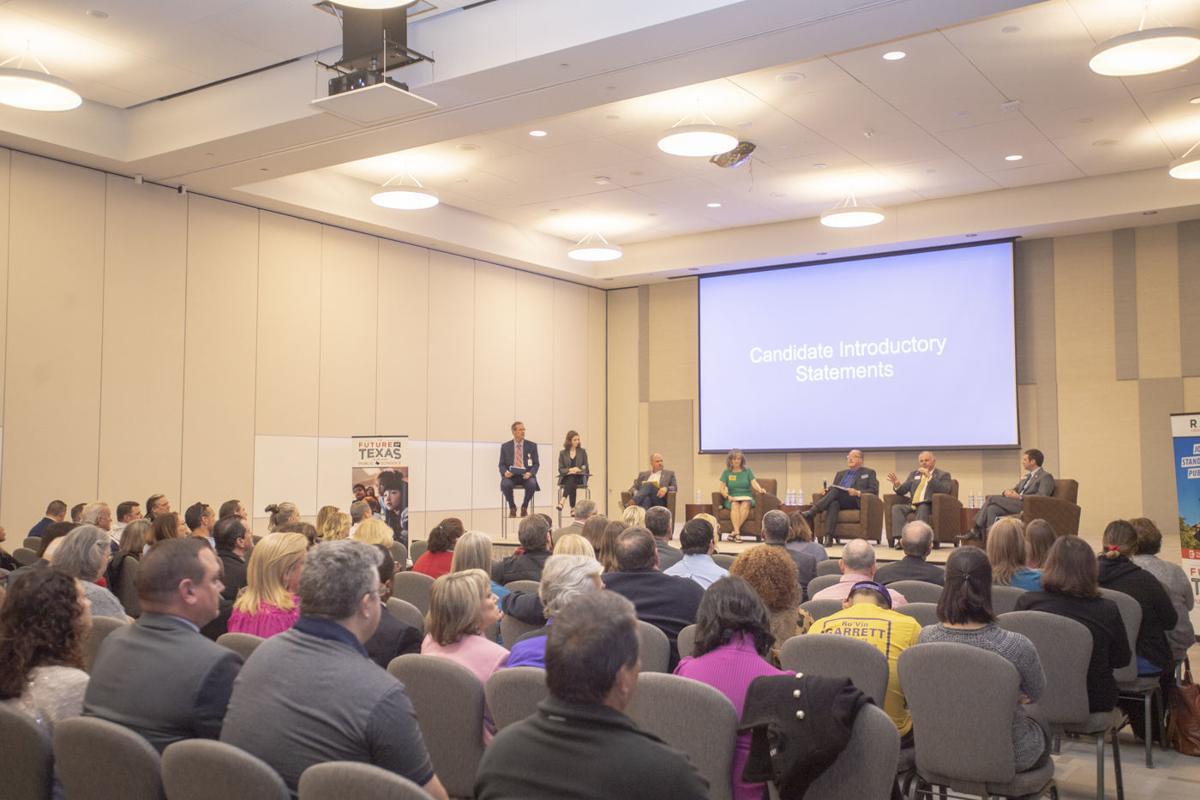 House District 25 candidates answered a series of education-related questions Thursday during an election forum at the Dow Academic Center at Brazosport College. 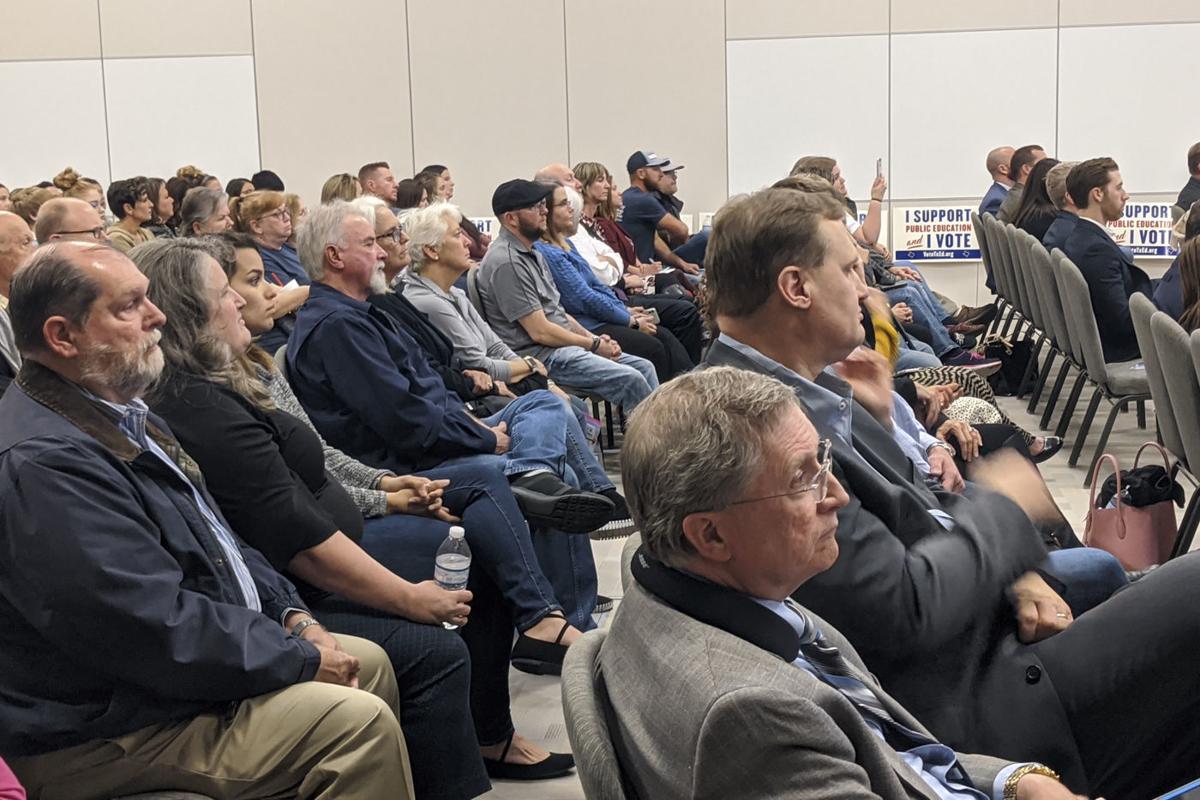 House District 25 candidates answered a series of education-related questions Thursday during an election forum at the Dow Academic Center at Brazosport College.

LAKE JACKSON — Potential representatives for Texas House District 25 responded to a series of education-focused questions, including about funding issues and the reliance on state-mandated testing, during an election forum co-sponsored by Brazosport ISD.

Several hundred people turned out to hear four of the five candidates for the Republican nomination and the lone Democrat at Thursday’s forum at the Dow Academic Center at Brazosport College. Republican Rhonda Seth did not attend because of a previous commitment.

“We are very proud ... to provide communities across the state the opportunity to participate in public education-focused candidate forums ahead of the 2020 March primaries,” said Tom Kelchner, regional advocacy director for the East Houston/Gulf Coast areas for the nonpartisan Raise Your Hand Texas Foundation, with partners in the forum. “The goal of these events, of course, is to give Texans an opportunity to hear directly from candidates and their views that (could) affect teachers, students, parents and community members.”

Early voting in the race starts Tuesday and continues through Feb. 28. Election Day is March 3.

“After my career in law enforcement I went on to be an entrepreneur and opened numerous businesses here in the district,” former Freeport Mayor and Brazosport ISD board member Troy Brimage said. “I currently work for Vernor Materials as a director of real estate and development and (am) committed to progress in District 25 currently today.”

Brimage touted his time on the school board, saying he was part of the team that oversaw turning Brazosport ISD back into the high-performing district it is today. He also talked about his two terms as mayor of Freeport and the corruption uncovered there. He pledged to continue boosting education and industry if elected.

“I’ve been the Brazoria County tax assessor-collector for nearly 20 years,” Garrett said. “I served in the tax office 16 years prior to that. I’m the only candidate in this race qualified to represent taxpayers and I have the ability to have an immediate impact.”

She described herself as a servant, rather than a politician, and said she has deep ties to county schools. She promised to keep in line with Christian and Republican beliefs if elected, but her only agenda will be the will of the people. Her knowledge of government workings, she continued, make her a well-qualified candidate.

“I am a teacher,” Henry said. “I taught high school special education for 34 years, 28 years at Angleton High School. I currently teach English as a second language to adults at Brazosport College.”

He pointed to his long years of teaching experience — 10 years as an Angleton City Council member, four and a half years as mayor pro tem and four and a half years as mayor — which he said demonstrated his experience and reliability. He said he built strong infrastructure, helped the city weather its storms and still found time to coach youth soccer, participate in Lions Club and become council president at his church.

Thames’ introduction focused on his business credentials and experience working with government leaders.

“I’m currently the president and CEO of the Bay City Chamber of Commerce and Agriculture, and education is something we look at every day,” he said. “From the business side … it’s so valuable to have good talent coming out of the schools.”

“You have an enormous responsibility and you ought to be supported entirely,” he told teachers. “See, I understand the importance of public education, not because I’ve gone through it, but also because my family’s been involved with it.”

Vasut talked about several members of his family who hold or previously held educational posts. He described himself as a product of public education, a successful attorney because of the excellent instruction he received and the teachers who invested in him.

House Bill 3, a school finance bill passed in 2019 and structured to provide more money for Texas classrooms, increases teacher compensation, reduces recapture and cuts property taxes. Concerns have been raised as to whether its provisions are sustainable, and the candidates were asked how they would address funding issues long term.

All candidates expressed support for HB3, with Garrett saying state and local governments need to share a 50/50 split of the financial burden. Henry suggested increasing state accountability for high-budget programs such as STAAR testing as well as forcing large corporations to abide by the same property valuation rules as small businesses. Thames suggested tying HB3 to the state rainy day fund, earmarking overflow for education, and allowing the state comptroller to invest in the fund. Vasut also advocated for a 50/50 split and suggested a review of education funding across the board. Brimage proposed increased state funding as well.

The state’s high-stakes testing and letter grade-based accountability system came under scrutiny from the candidates when they were asked for their input on the issue.

Henry was critical of the process, saying it causes unreasonable stress for students and teachers. Thames described it as an outdated system focused on sending students to college, not preparing them for careers. Vasut said he’s strongly against the current testing system and wants a gauged system that measures student growth. Brimage said the system hurts schools and creates unnecessary pressure. Garrett said there must be some way to measure what students learn, but linking funding to test scores is the wrong incentive.

Thames said he does not support vouchers in District 25 and tax dollars should stay in public schools. Vasut also said public money should be spent on public schools. Brimage also said he thinks public money should go exclusively to public education. Garrett said there is confusion over what exactly constitutes a private school, and there should be clarification and further discussion between state and local government about related duties and responsibilities. Henry said he will never support public money for private schools and opposes the siphoning of tax dollars by private schools.

Further questions addressed teacher shortages, Chapter 313 school value limitation agreements and the role of state versus local school board control. Candidates ended with closing statements and exhortations to check out their various campaign websites and vote for them.

My vote is in the air. Of course I want vote for a dem. They have to obey Pelosi

School vouchers are necessary due to schools and Starr aren’t educating our children properly. Too much social engineering in schools . They think they are teaching morals but that of man not of Christ , so it isn’t working

Just to clear up any confusion caused by the poor syntax in the opening, Iam not a Democrat. I am a conservative Republican.