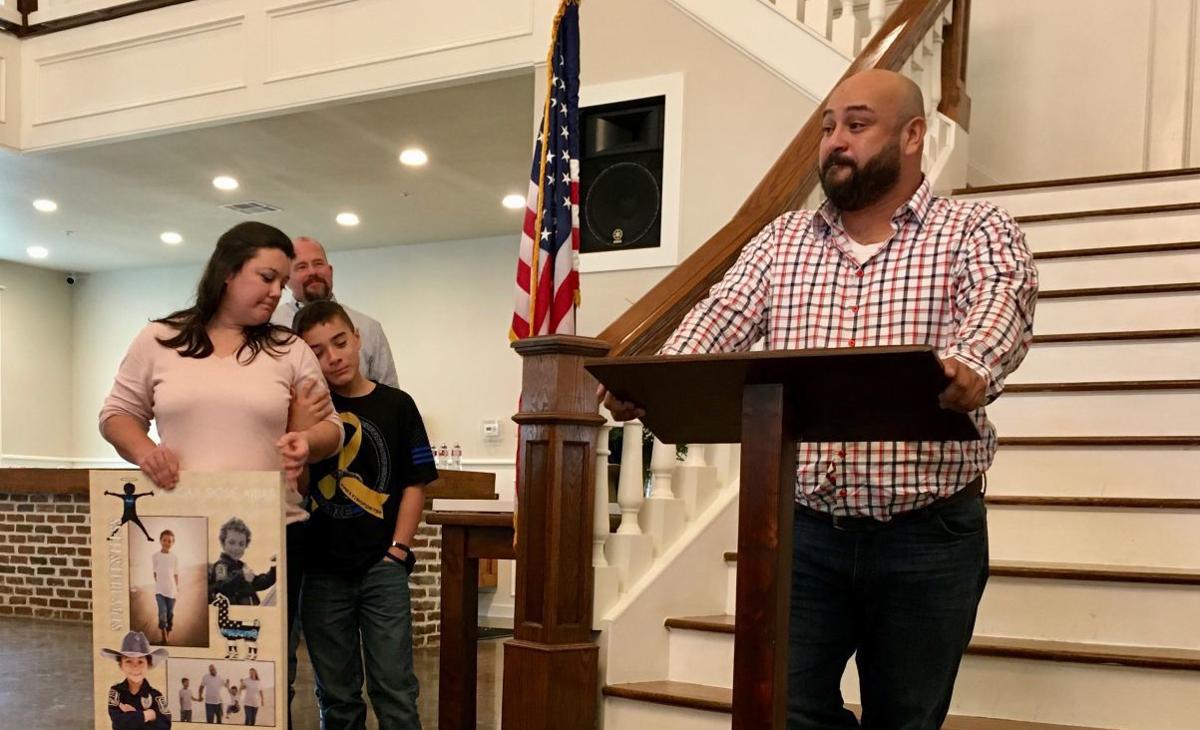 Ruben Arias speaks after accepting the Angleton Chamber’s Citizen of the Year Award on behalf of his daughter, Freeport Officer 758 Abigail Arias, who lost her battle with cancer Nov. 5. 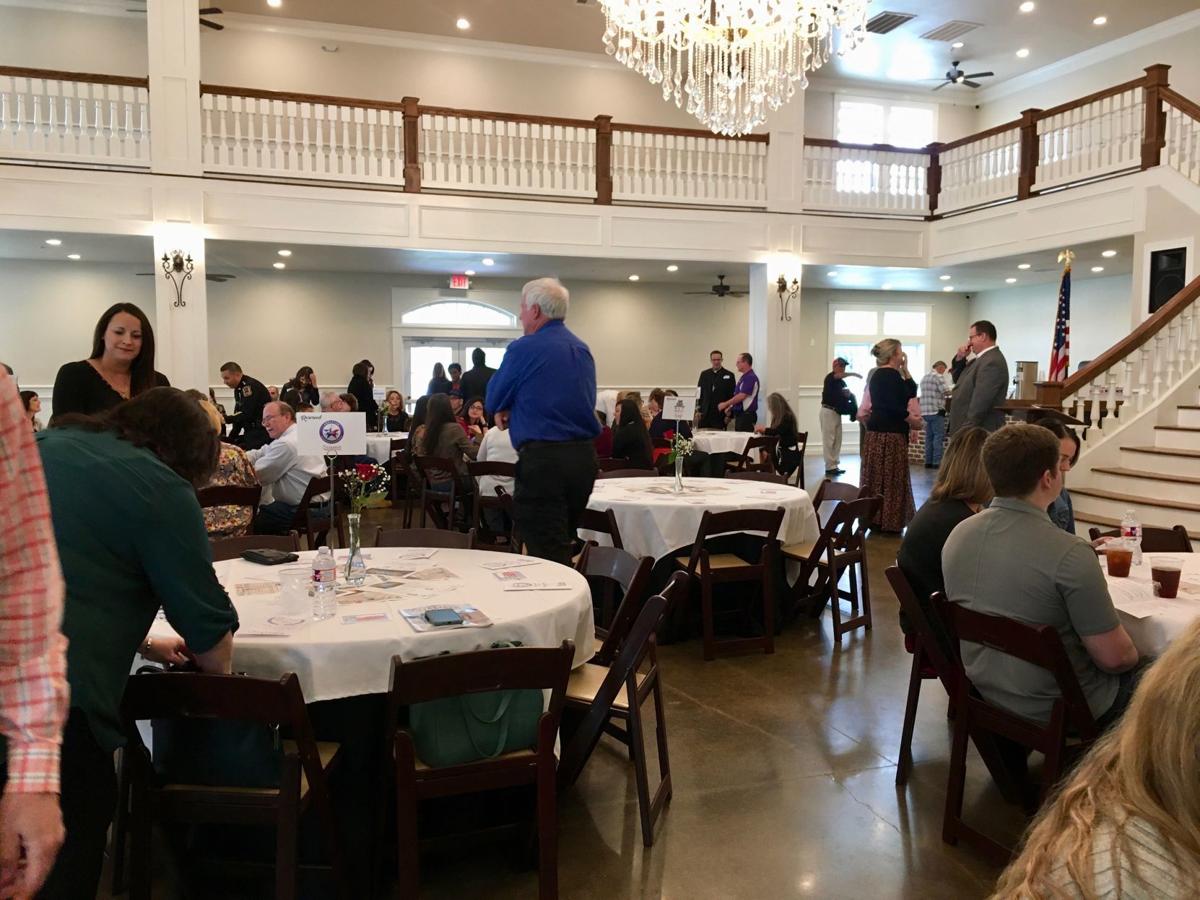 The Oaks at Oaks Plantation in Rosharon is a new event center in Brazoria County. 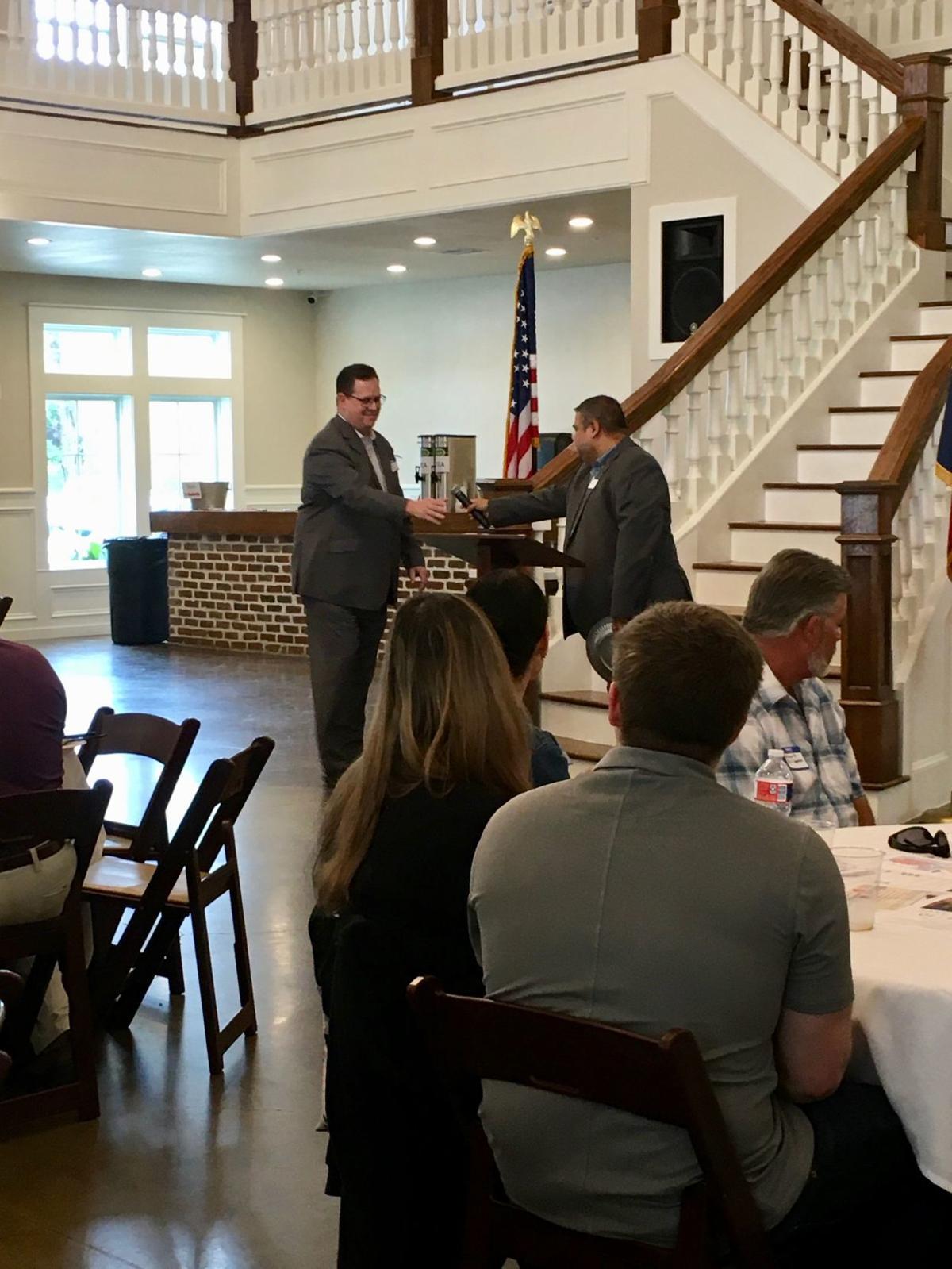 Angleton Mayor Jason Perez accepts the Champion of Business Award on behalf of the city during the Chamber of Commerce’s 10th annual awards luncheon.

Ruben Arias speaks after accepting the Angleton Chamber’s Citizen of the Year Award on behalf of his daughter, Freeport Officer 758 Abigail Arias, who lost her battle with cancer Nov. 5.

The Oaks at Oaks Plantation in Rosharon is a new event center in Brazoria County.

Angleton Mayor Jason Perez accepts the Champion of Business Award on behalf of the city during the Chamber of Commerce’s 10th annual awards luncheon.

ROSHARON — Abigail Arias, the 7-year-old who died of a rare cancer in November, had a role in the community that will continue well into the future, one reason why the Greater Angleton Chamber of Commerce named her its Citizen of the Year.

Her family accepted the award on behalf of Honorary Freeport Officer 758 during the chamber’s 10th annual awards luncheon Thursday at The Oaks at Oaks Plantation.

“I’ve watched Abigail’s story from day one,” Angleton Mayor Jason Perez said. “She’s from Angleton, and Freeport has taken her under their wing and that’s beautiful as well — so we got to share in her story. It’s amazing what she did in a short amount of time — the impact around the globe. I’m deeply honored that they selected her to be our Citizen of the Year.”

When the chamber called the Arias family about the award, Abigail’s father, Ruben, didn’t understand at the time why Abigail was receiving it, he said.

When he looked up what it meant to be a good citizen, he found it meant having and showing respect and having a good attitude for helping others, he said. He described Thursday how Abigail embodied those traits every time she put on her police uniform or attended an event, no matter how tired she was or how much pain she was in.

“Every time she’d put it on, if you’d ask her what she was doing, she’d tell you, ‘It’s time to go to work,’” Arias said during his speech. “She respected that uniform and everything that came with it. She knew that by putting on that uniform it was her time to become a public servant … and she would stand and smile at every event, and just pour out her love and her faith each and every time.”

Also honored during the event were William Fondren as ambassador of the year; Christina Korenek, as volunteer of the year; Belinda Gaines, who received the President’s Award; Angleton ISD, received the Pioneer Award; and the city of Angleton earned the Champion of Business Award.

“Some of these people work really, really hard and have done amazing things,” Perez said. “I really enjoy coming to this when I can. It’s just neat to see the recognition from the people from our community. A lot of people work hard.”

People are selected to receive awards based on whether they’ve done something exceptional that has had an impact on the community, Perez said.

Before closing the luncheon, outgoing Chairman Mark Holian introduced Angela Dees as the new board chairwoman for this year and took a moment to acknowledge the chamber staff for everything that they do for the community.

Before becoming involved, Holian wondered what the chamber did for local businesses and how that affected him, he said.

“It unifies us,” Holian said. “It brings us together, brings the leaders of the community together. … There’s no value that can be placed on that.”