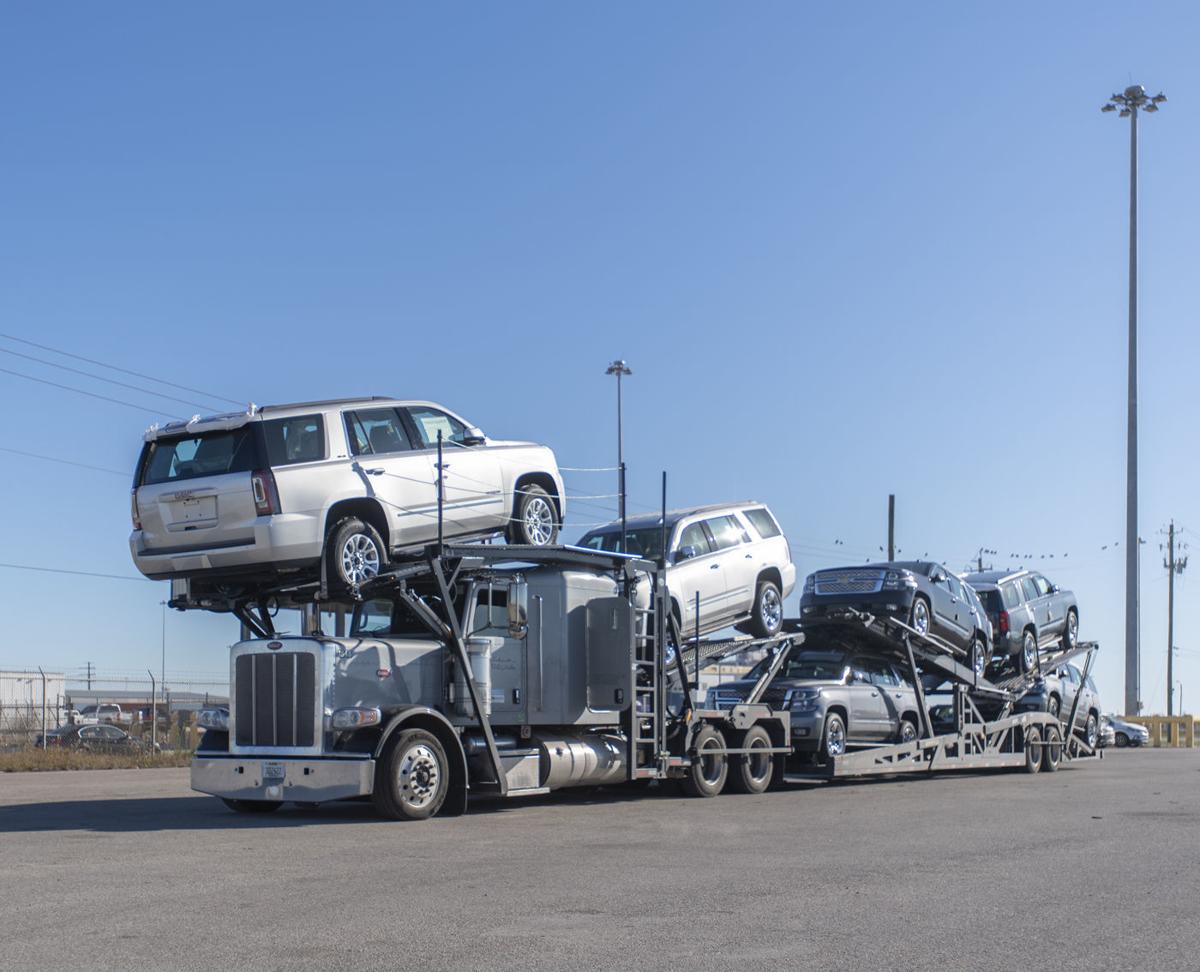 Cars are loaded onto a truck for transportation to a vessel Friday at Port Freeport. 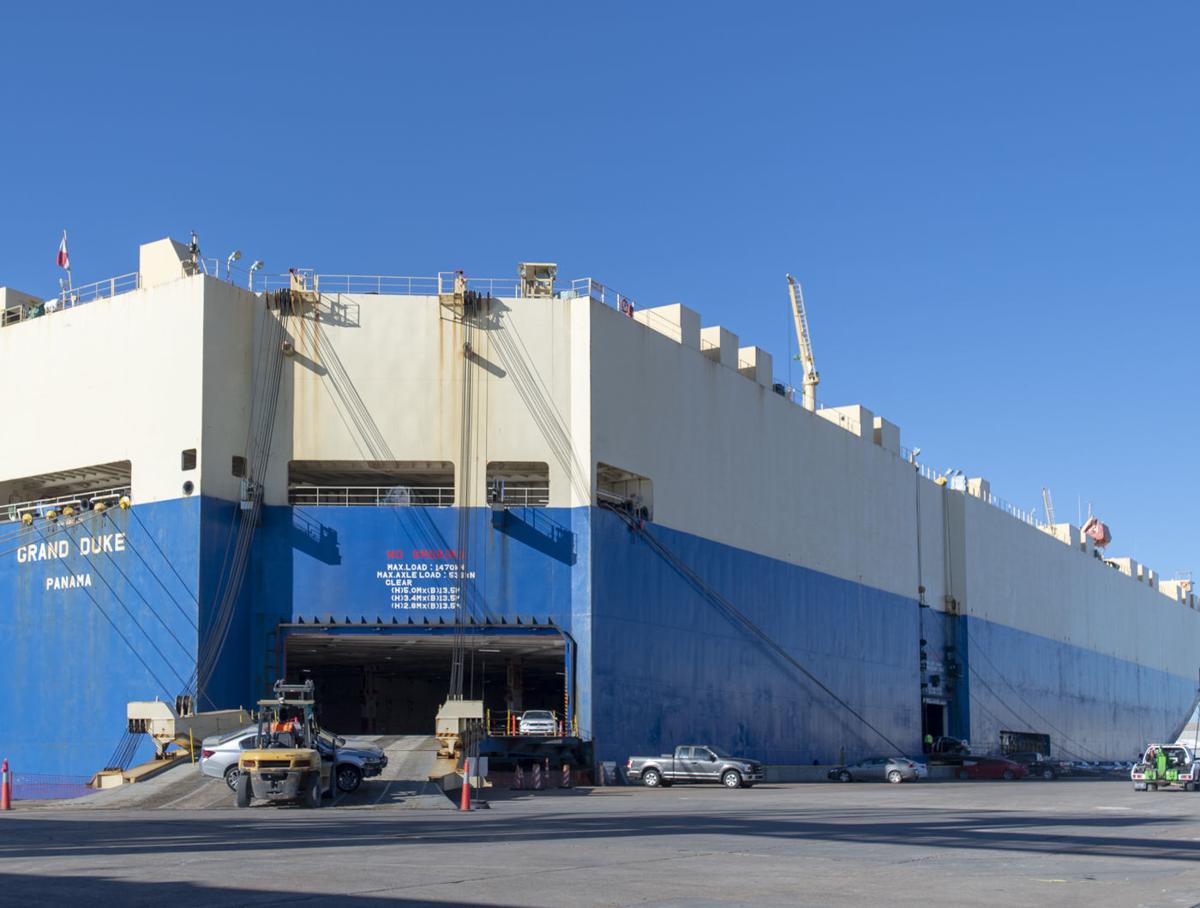 Cars are transported onto a vessel Friday at Port Freeport. 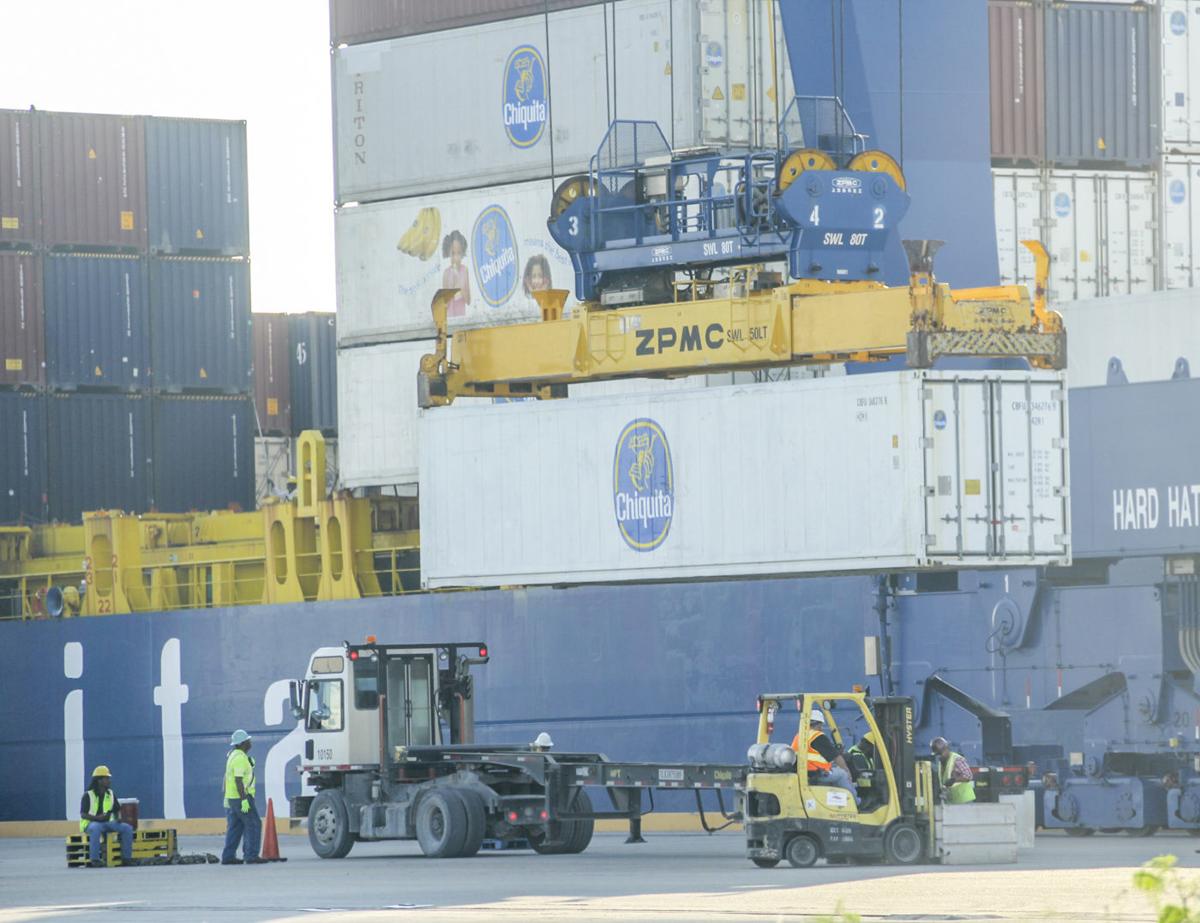 A Chiquita container is placed onto a truck for transporting at Port Freeport. Although the Brazoria-Fort Bend Rail District is being dissolved, the future of shipping remains a concern in southern Brazoria County.

Cars are loaded onto a truck for transportation to a vessel Friday at Port Freeport.

Cars are transported onto a vessel Friday at Port Freeport.

A Chiquita container is placed onto a truck for transporting at Port Freeport. Although the Brazoria-Fort Bend Rail District is being dissolved, the future of shipping remains a concern in southern Brazoria County.

A short-line railroad from southern Brazoria County to Highway 59 proved to not be a bankable option, according to a group commissioned to look into that possibility, but Port Freeport’s traffic is expanding, and infrastructure to support a higher volume of shipping through the Highway 36 corridor and beyond will be necessary, officials say.

Port Freeport was one of the three sponsors of the Brazoria-Fort Bend Rail District, which plans to dissolve after a feasibility study showed that rail traffic would not be profitable enough to support a railroad from Freeport to Fort Bend County, near Kendleton. The other two sponsors were Brazoria County and Fort Bend County.

“It was a feasibility study; we needed to know whether it was feasible to try to pursue a rail or not,” Port Commission Chairman Shane Pirtle said. “As this area continues to grow, there’s going to be a need for more rail.”

In 2018, Union Pacific started operations of a Storage in Transit yard near Highway 288 in Angleton to store railcars until they are ready to be shipped to their next destination, which gave local businesses support to produce at a higher rate, a Union Pacific official said.

Port Freeport uses Union Pacific rail from the port to Angleton, then from Angleton to just south of Houston, Pirtle said.

The rail and the 288 corridor give great access to the major Houston market, and from there commerce can disbursed elsewhere, Saathoff said.

But the Houston market is not the only place Port Freeport’s commerce needs to go. The Highway 36 corridor gives access to the west of Houston and around it, Saathoff said.

“That corridor is going to become much more important,” she said. “We have a practice at the port of trying to stay ahead of the growth and the demand.”

There are several ways the port works to cut down on traffic impact, including the heavyweight corridor to Bay City, Saathoff said.

The heavyweight corridor is a series of roads through Freeport, Clute, Sweeny and Bay City that allow loads of the Mexican Legal Weight Limit or 125,000 pounds, whichever is less, according to the port website. It was established by the Texas Legislature in 2008.

Tenaris built a facility in Bay City and signed a lease with Port Freeport, she said. Using the heavyweight corridor to transfer steel to that facility decreases the number of trucks by 40 percent, she said. There have been 8,000 permits issued, which means about 3,300 fewer trucks, the CEO said.

“The port wants to continue to be a partner with the communities in this region and look at ways to manage the growth we know is coming,” Saathoff said.

Though Port Freeport understands the importance of the 36 corridor, the port did not initiate formation of the Brazoria-Fort Bend Rail District.

Fort Bend County did an initial study years earlier, since they were interested in being a distribution hub and connecting to local industry growth, Pirtle said.

This was the Highway 36A Development Corridor Rail Business Plan by Transportation Economics & Management Systems, often referred to as TEMS, according to Fort Bend County meeting documents. The study was presented in September 2014, the documents show.

Texas Department of Transportation funded $600,000 of a planning level study for a direct freight corridor from Freeport to an intermodal hub near Rosenberg, a news release announced in early 2018.

Leaders cited the expansion of the Panama Canal, allowing larger container ships to proceed from the Asian market directly to the U.S. East Coast, Port Freeport’s channel deepening and expansion project, Highway 36 and 36A improvements by the department of transportation and the potential short-line rail from Freeport to Rosenberg as reasoning behind this study.

In a news release, Fort Bend County Commissioner Andy Meyers said there is “a unique opportunity to transform our region into the main gateway serving Texas, Dallas Fort Worth and the Central U.S.”

Robert Laza, executive director of the district, and Earl Shipp, president of the commission, said HDR Engineering determined the project was not feasible.

There was some misconception from the public that the project was bound to happen, rather than just a feasibility study, Shipp said, but most people who became engaged understood.

Rob Giesecke, a landowner along Highway 36, was one of those engaged residents.

While he knew the potential routes would be west of his property, he felt the district had a “lack of regard” for landowners, Giesecke said.

Plus, he doubted there never would be enough container volume to make the project economically viable and the length of rail would be too short to be logical.

Route wise, the engineering firm had projections that could have worked.

“Well, it was feasible … At the end of the day we explored many, many possible routes,” Shipp said.

All kinds of routes were explored and discussed, including one from Freeport to El Campo, Pirtle said. But there were never lines drawn in the sand, he said.

“Right now, the freight loads that HDR was projecting … We were looking at 2028, they do not support the rail,” Laza said.

The firm did a good job and presented reasonable results, he said.

“While it was feasible, it was not bankable,” Shipp said.

The projected volume of freight compared to the cost to build a railroad was not economically viable, he said. It would burden the taxpayers, which the sponsors did not want, Shipp said.

It is not in the rail district commission’s charter to look at other options for this particular issue, Shipp said.

“The work of the rail district is to wrap up our project in an efficient manner,” he said.

The district’s work over the next two to three months is to provide a wrap-up report to Texas Department of Transportation, Shipp said.

There is a need to preserve data and remember what has been learned from their efforts, Shipp previously said.

“Beyond that, unless our sponsors have another task for us, we will go dormant at that point,” he said.

The port is spending “an awful lot of money expanding,” which means there is more freight coming and going, and that eventually will create an issue with the roads, Shipp said.

If roads end up being expanded to accommodate more truck traffic, that would equally burden all taxpayers rather than the port sharing more of a burden, he said.

“From an equity standpoint, I could argue that the port should look at other options,” Shipp said. “But that’s not in our charter.”

For now, the Texas Department of Transportation has started expanding Highway 36 to four lanes, Saathoff said.

There is another feasibility study underway for the “36A piece,” which would connect Highway 36 all the way up to Highway 6, northwest of Houston.

That would help support a four-lane connection all the way up to Dallas-Fort Worth market, Saathoff said.

That has been underway for quite some time, she said, and the port will support it if it turns out to be feasible.

Pirtle has been part of the 36A Coalition for years. Other members of the coalition include Fort Bend County, Waller County and Brazoria County, according to the website. Its mission is to advocate for the development of a regional transportation infrastructure from the Brazosport area to Hempstead and beyond, which will provide for improved hurricane evacuation, more efficient mobility and economic development for the region and the state.

The goal of 36A would be to create a new highway that is a continuation of Highway 36, Pirtle said. It would create a four-lane path that connects to Highway 59, Highway 90 and eventually Interstate 10, he said.

The exact “tie-ins” are not yet determined, since this is in the feasibility phase, Pirtle said.

“If we’re not looking at that, we’re not doing our jobs,” he said.

The traffic congestion will likely get worse before it gets better, Pirtle said.

That is not just because of the port’s growth but commercial investments and population growth, Saathoff said.

Giesecke plans to keep an eye on it, he said. The port is a valuable resource, but it is there to serve the taxpayers, not the other way around, he said.

Port Freeport is a partner and member of the community, Saathoff said.

“We want to work with the community and stakeholders in managing our growth,” she said. “The entire region’s growth.”