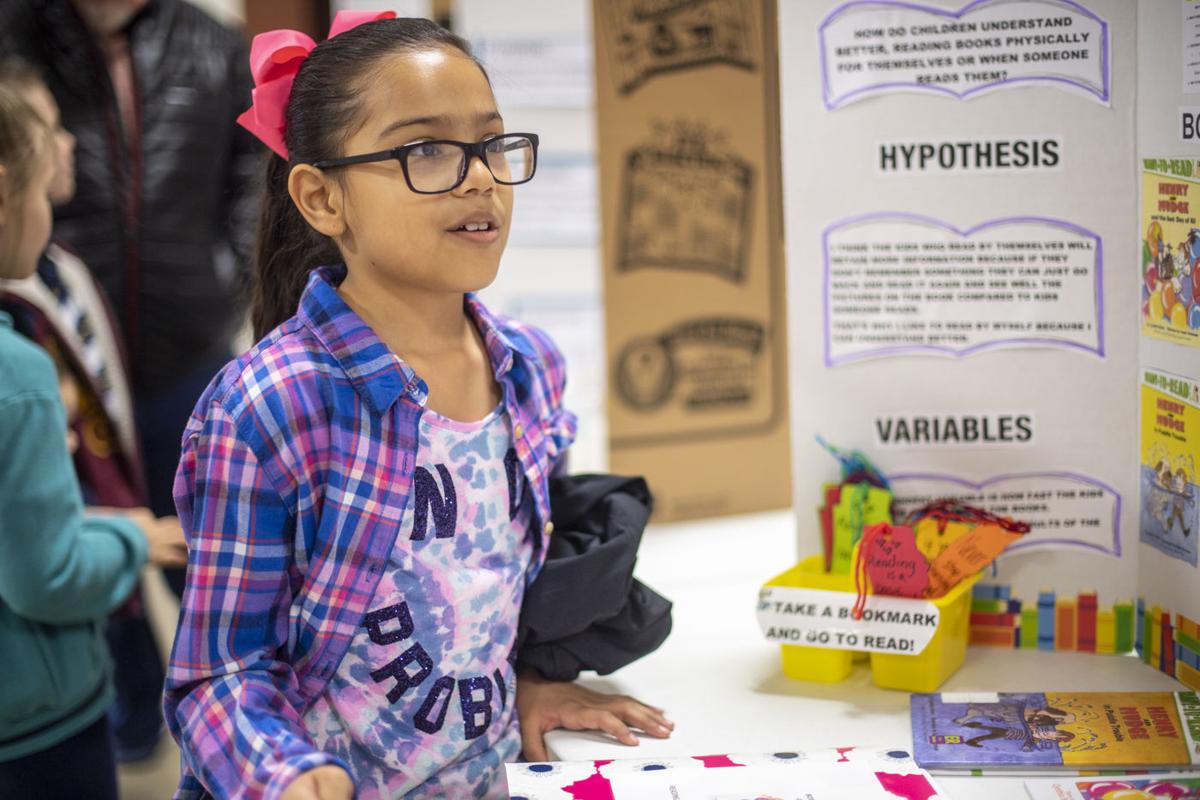 Eight-year-old Isabella Nunez from Velasco Elementary discusses her science project Saturday during the public showcase at the Brazoria County Science Fair. Nunez was curious to know if children understood books better when they read to themselves or listen to someone else read. 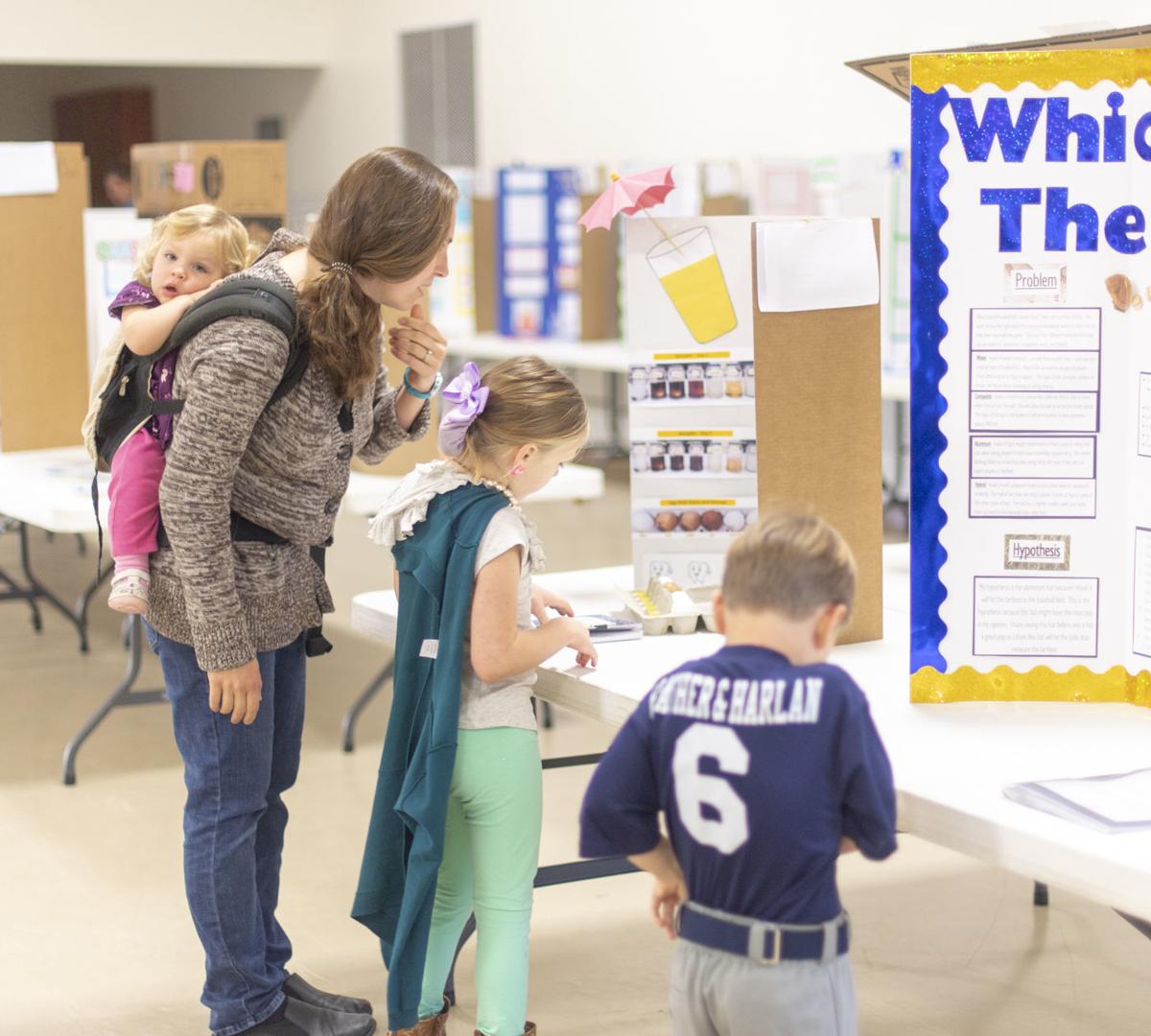 Eight-year-old Isabella Nunez from Velasco Elementary discusses her science project Saturday during the public showcase at the Brazoria County Science Fair. Nunez was curious to know if children understood books better when they read to themselves or listen to someone else read.

Some students specialize in scien ce, going on to major in and make a career out of engineering, physics or biology. Others have their strengths in history or writing and barely get the grades they need to pass their science classes.

What’s so great about the Brazoria County Science Fair is any student, no matter their gender, interests or favorite subject can do a project, participate and experience the fun and usefulness of science.

“I think one of the benefits of our county science fair is that we’re reaching all students,” event Chairwoman Sandra Consilio said. “It’s not just engineering projects; it’s not robotics. It’s at the level of interest that each of the students have.”

Projects did not have to be related to something strictly scientific — one third-grade project explored how reading affects schoolwork, and the student left a bucket of bookmarks for people to take as they came by, Consilio said.

The fair’s effort to reach all students is evident by its growth. At the latest contest Feb. 20 to 22, 17 schools across the county were represented across 367 submitted projects, from pre-kindergarteners through eighth-graders, Consilios said. More than 75 submissions came from fifth-graders alone.

Homeschool groups were also eligible to participate, and a group of Life Skills students from Clute Intermediate brought their science fair boards to display.

The fair might include Life Skills students as their own grade level for next year, which would be great to see. All students are capable of participating in this event that helps them learn and express creativity.

There are many things that small municipal governments could do with spare funds, including paying off debts or sprucing up a park. But in Quintana, the small number of people are well taken care of, so the town council decided to give $25,000 to an organization that could really use it.

Warriors Refuge in West Columbia has the space to house more veterans who are in need of a place to stay, but they need more funding to do so, Refuge Executive Director Cliff Robertson said.

The facility will also provide medical care, mental health counselors and numerous other resources veterans could need while transitioning back to civilian life, Robertson said.

The council approved the donation at their meeting Feb. 18.

“We’re not a rich community, but we understand what you’re doing and we want to be able to participate and help you as we can,” Quintana Councilman Mike Fletcher said.

Fletcher, a veteran himself, specified that they are not making the donation for recognition.

But the refuge, which has about 30 residents already, could use the support and Quintana deserves recognition for giving it.

It’s shame worthy enough that Congress has failed to pass a law making lynching a federal crime since 1900. Now that it’s done, it’s more shame worthy that any members of Congress would feel the need to vote against such law.

Four members of the House of Representatives voted against the Emmett Till Anti-Lynching Act, which President Donald Trump is expected to sign into law.

The representatives have cited reasons for their “no” votes including limiting freedom of speech and opting for smaller government, but there are better times and places to express those opinions.

Lynching is a despicable part of American history that went unfortunately unpunished or not punished severely enough in many cases, including Till’s in 1955. The white men who brutally kidnapped and murdered the 14-year-old boy were found not guilty.

While terrible instances of lynching have decreased over the years, there is no reason that it shouldn’t be federally outlawed. At least a vast majority of Congress agrees with that.

There are better times and places for you to express your opinions as well. You and congress both are show boating. I can't imagine anyone approves of lynching, but murder is already a crime. Seems like a waste of time, but that's seems to be what liberals want from our government.

Mr. Morris is being paid to do a job and this is part of his job. If he didn't do it, you would want him fired for not doing his job. Do you complain when he prints opinions from Byron York or other republican individuals? Of course not.

And yes there are hate groups and individuals that still approve of lynching. Did you forget James Byrd, Jr.? Lynched in Texas 20 years ago. I'm sure though you will dispute why that reference is irrelevant.

James Byrd was not lynched. He was dragged to death. And the people responsible were punished at least one was executed. Lynching isn't anymore heinous than murder. Just like "Hate" crimes. Murder is murder and should be punished to the fullest extent of the law.

I beg to differ. Lynching is a premeditated extrajudicial killing by a group. So yes, Mr. Byrd was lynched.

Uh 22 years and yes why is it relevant today? Hate crime, on top of murder, on top of lynching, anything else? You're probably against the death penalty too. Didn't take a lynching law to get the murders put to death for the murder of Mr. Byrd.

And you are wrong yet again. Shawn Berry was convicted and sentenced to life in prison. He will be eligible for parole when he is 63 years old and as an added bonus, he was permitted to marry his girlfriend while in prison. Does that shed light on why it is relevant?

Brewer and King were executed. Berry who testified against the executed trash is eligible for parole in 2038. You are an intellectual midget and should be ashamed of yourself for misrepresenting facts!

Mr. Morris, I won't let this go against Natives5.

You're both adults. If you want to disagree, have at it. Just keep the shots above the belt.