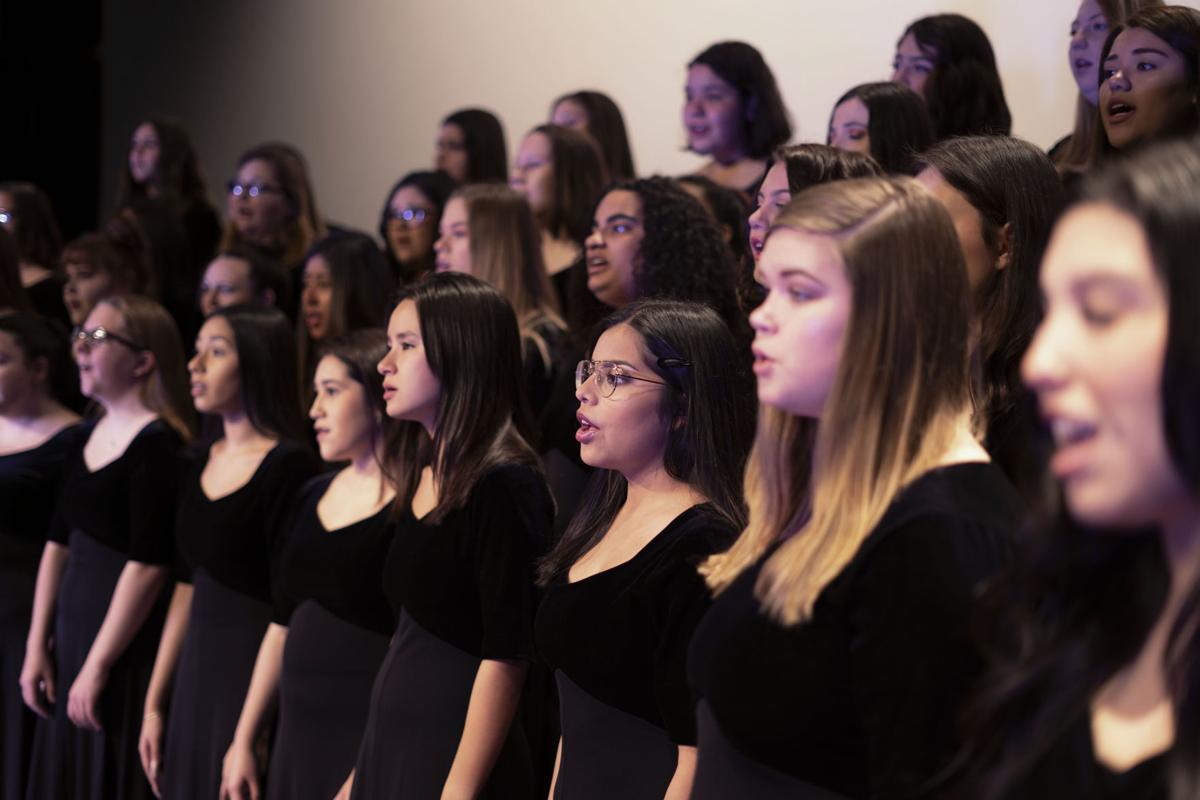 Angleton High School Varsity Treble Choir singers perform at a rehearsal. The choir is headed to the Texas Music Educators Association Clinic/Convention in February in San Antonio to perform in front of thousands of music educators. 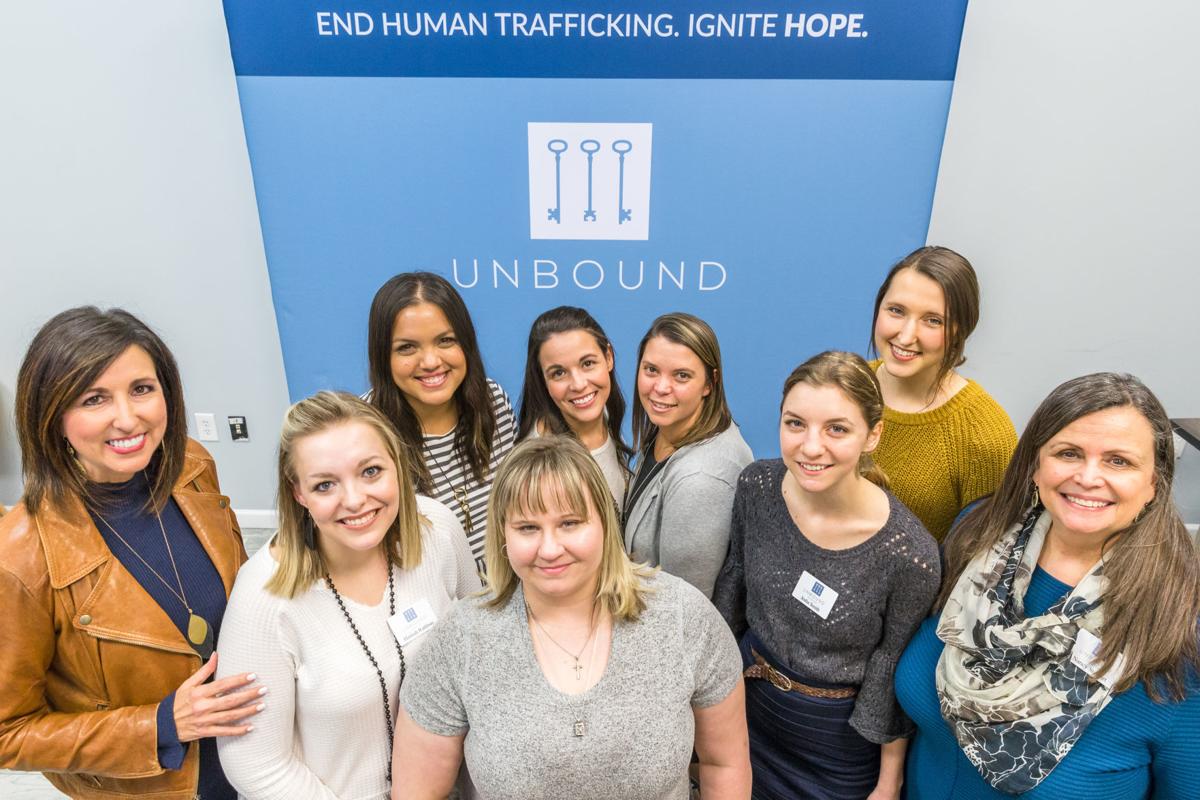 Angleton High School Varsity Treble Choir singers perform at a rehearsal. The choir is headed to the Texas Music Educators Association Clinic/Convention in February in San Antonio to perform in front of thousands of music educators.

Sports are big on spectacle, recognizing impressive achievements of local athletes. But there are plenty of other talented Brazoria County residents who deserve recognition.

Just take a look at the Angleton High School Varsity Treble Choir, which is headed to the Texas Music Educators Association Clinic/Convention in San Antonio this month. There they will perform in front of thousands of music educators who recognize excellence in band, orchestra and vocal education.

“It’s like the equivalent of making All-State. It’s a big deal. It’s a very big deal,” senior Morgan White said. “We just perform in front of thousands of people judging everything about us. Judging our looks, our singing abilities, our choir director, the way he dresses, everything.”

Supervisor of Choral Activities Tony Stewart described the event as the highest achievement an ensemble can reach. But even for the school, this is something worthy of celebration.

It’s the first time a performing ensemble from the school has been invited to TEMA, which requires recorded video performances to be submitted and reviewed by judges before being selected as one of the two high school treble choirs in the state selected to perform.

“It just shows what a mature group of girls they are and (how) capable, not just talented,” Associate Choir Director Elaina Perez said. “The level of dedication and maturity they have to their art form is extremely tremendous.”

But this is in addition to this honor, students Nidia Guevara-Nolasco and Mia Mintz, recently made All-State Choir and will rehearse and perform with other All-State singers in separate concerts during the convention.

Make sure theses talented students get the recognition they deserve.

Human trafficking is an insidious problem that isn’t always obvious. It hides in the dark corners of society, seemingly catching residents by surprise when news of another victim surfaces.

Because of that, sometimes the resources for victims and opportunities to raise awareness of the issue isn’t always present in communities. That’s why residents should be thankful for the continued effort of those in charge of Unbound Houston, which recently opened its new advocacy center in Pearland.

“We serve survivors from Brazoria, Galveston, Fort Bend and Harris counties,” Director Kerri Taylor said. “We’ve dreamed of having a place where we can serve survivors. A lot of what we’ve done is making people aware, so it’s sort of like a snowball effect the more awareness that builds. We’re really hoping we see these victims sooner so they can get services sooner. It fills me with a lot of hope. The whole reason we’re bringing awareness is so we can bring people to restoration.”

The facility will provide victims of trafficking with a safe haven and resources to start working toward a new life.

At the new facility, the nonprofit has doubled its staff and added five advocates to the facility.

It’s always great to see progress in the battle against human trafficking.

Plenty of shame to go around for impeachment proceedings

It seems politics have reached a pivotal point. Despite the impeachment trial reaching the U.S. Senate, legislators voted to deny admitting new witnesses and evidence to the proceedings.

While it’s understood that one political side wants to hold a spectacle of a trial and the other would rather the whole thing disappear, this moment sets a precedent that many likely won’t appreciate in years to come. In any trial, the defense would of course love to limit the number of witnesses, assuming those witnesses would not help their case.

The shame here is not in favor of either party. Both share some shame in this entire process, but in the years ahead, expect to see the bar for political standards continue to be lowered.

The point of some unwritten rules in politics is that it is assumed what is fair for some is fair for all. That means even when the cards aren’t in your favor, you don’t deviate from the norm as you should expect the same treatment when the tables are turned.

That’s what politics is all about: Finding where we can meet in the middle to reach common goals. But the partisan results of what happened this past week in the Senate will likely do much to prevent that in years to come.

Baloney!!! The democrats deserve all the blame in this fiasco. They denied the president due process in the impeachment proceedings. Everything was done in secret and the republicans were not allowed to call any witnesses. This was a con job from the beginning. Mueller failed to get rid of President Trump, so the democrats came up with some trumped up charges to try to overturn the election. The house never defined a crime in the articles of impeachment just generic phrases to make one believe a crime was committed. Bug eyed Schiff said their case was over whelming. Pelosi said she had to act fast for national security was at risk but sat on the impeachment for a month before sending it to the Senate. Then she tried to dictate to Senate how they were to do their business. When Schiff’s over whelming case got to the Senate, he decided he needed more witnesses. The rules are the house investigates, and presents its case to the Senate, and the Senate either convicts, or acquits the president.

The democrats have had the house for 3 years now, and all they have done is try to overturn the election and haven’t done anything to benefit the American people. Hopefully they will pay dearly come November.

That's why several Republican Senators came forth and said the House proved their case yet they are too afraid to go against trump. That is a sad testament right there. November will be interesting to say the least. God bless America as we need it now more than ever.

I see you still name call and spread lies, Bulldog. Does making fun of Adam Schiff's looks make you feel like more of a Christian?

2 isn't several. Name one lie I told. Just because you don't like the facts doesnt mean they aren't true. Anyone with a modicum of common sense knows I'm telling the truth

Lie: "Dems haven’t done anything to benefit the American people" - Kind of hard to do anything to benefit the American people when the House has sent over 400 bills passed by them to the Grim Reaper who refuses to do anything with them. But of course, blame the House and the Democrats. I guess the Democrats had nothing to do with USMCA which has been touted as a bi-partisan success.

I love when you try to deflect with the "you don't like facts"; this coming from the guy who shared a facebook post from "Tim Allen" filled with lies that were proven to be right wing talking points. Okay, got it.

And those Bill's they passed would hurt the American people. That's why they died.

That’s right, the Violence Against Women Reauthorization Act is just terrible for Americans (sarcastically stated). Anyone with a modicum of common sense knows you don’t deal with facts and common sense.

Native you are the one who spreads dem indoctrination and lies. Please name the seven Senators. Also you watched the dem Hitler kangaroo court with no White House witnesses , no White House cross examination and your corrupt self is ok with this

Or should I say, okie dokie, sport.