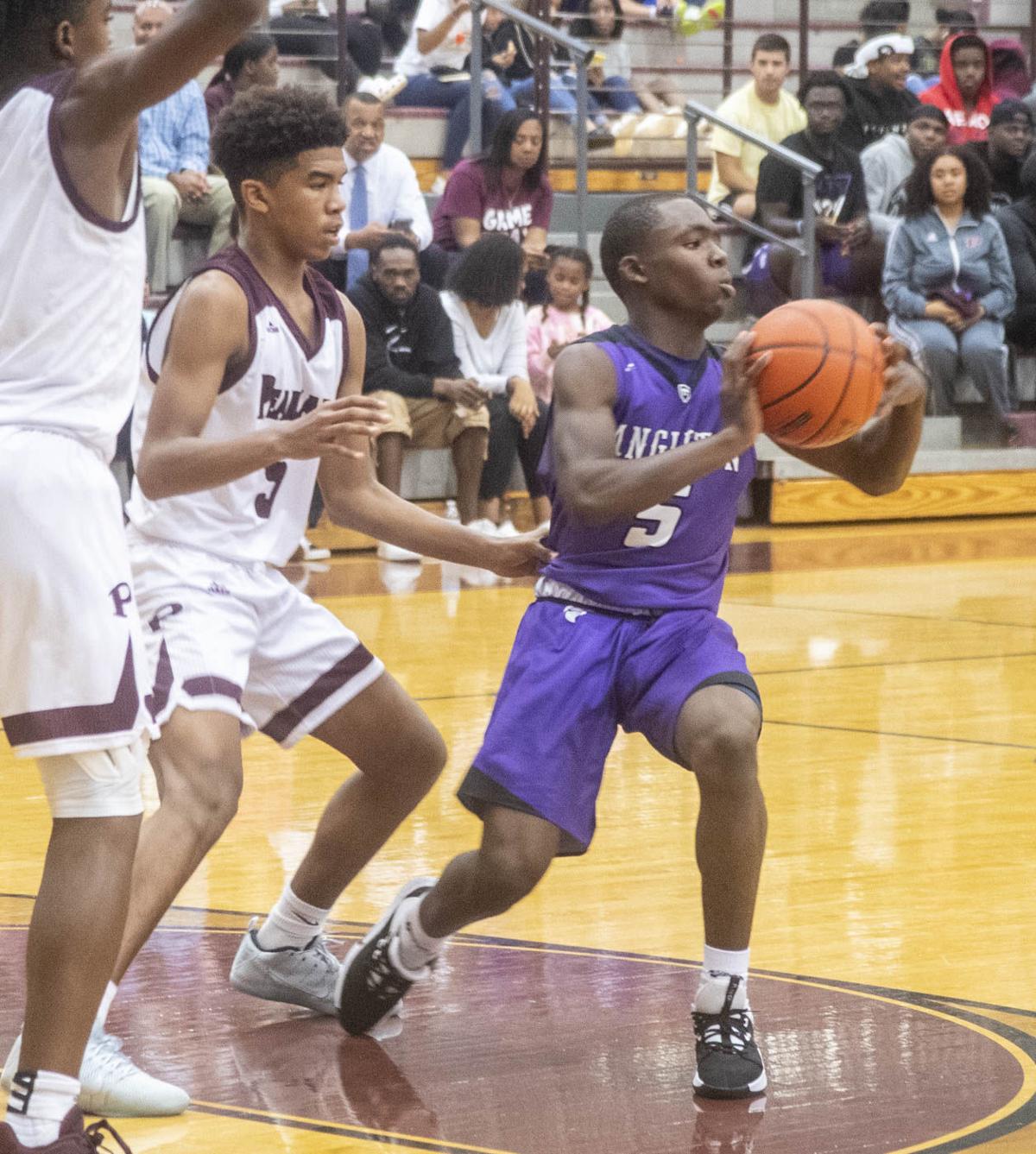 Angleton’s Myalek Woods passes the ball as he is being guarded by Pearland’s Jordan Maxwell during Tuesday’s game at Pearland High School. 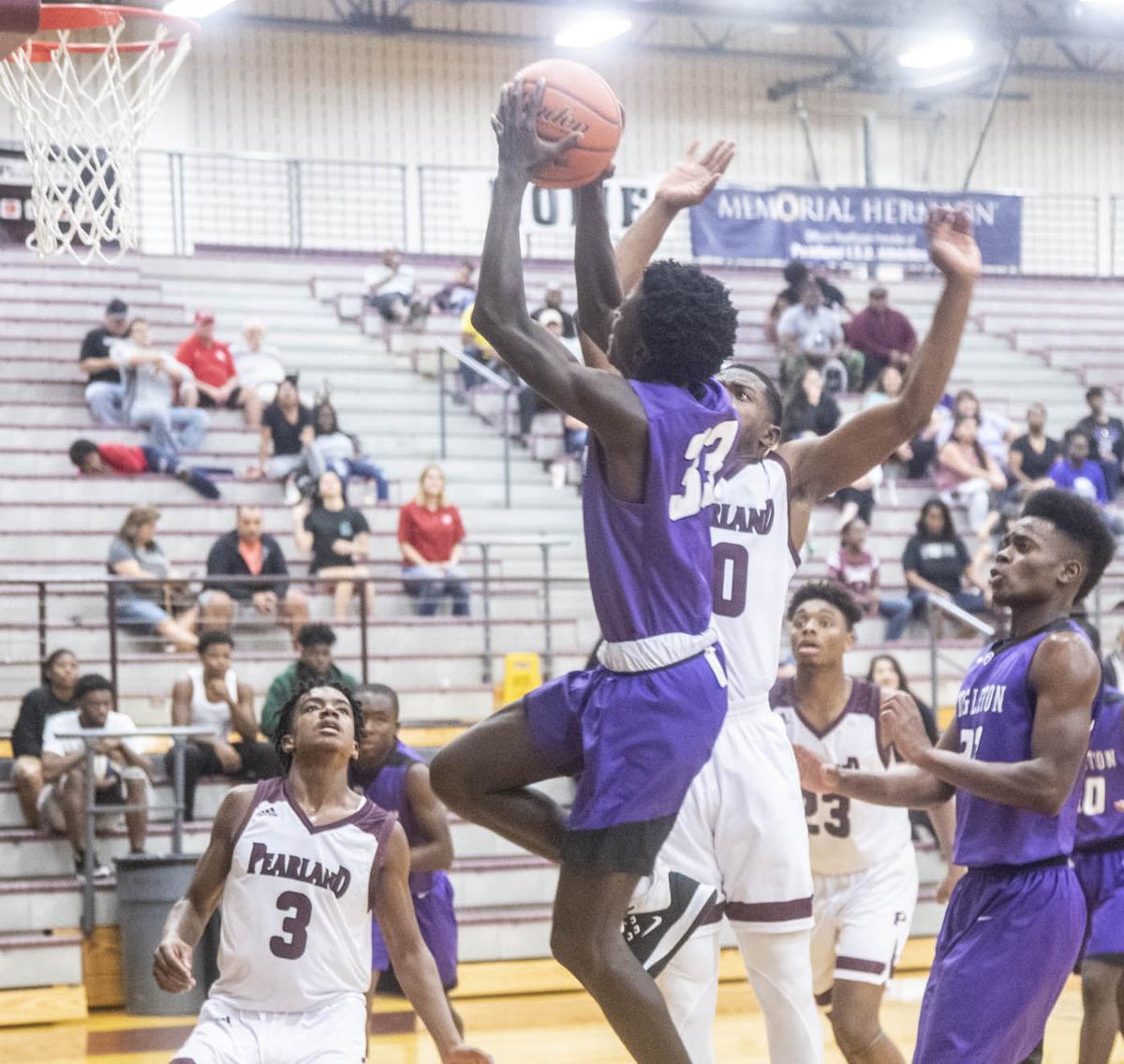 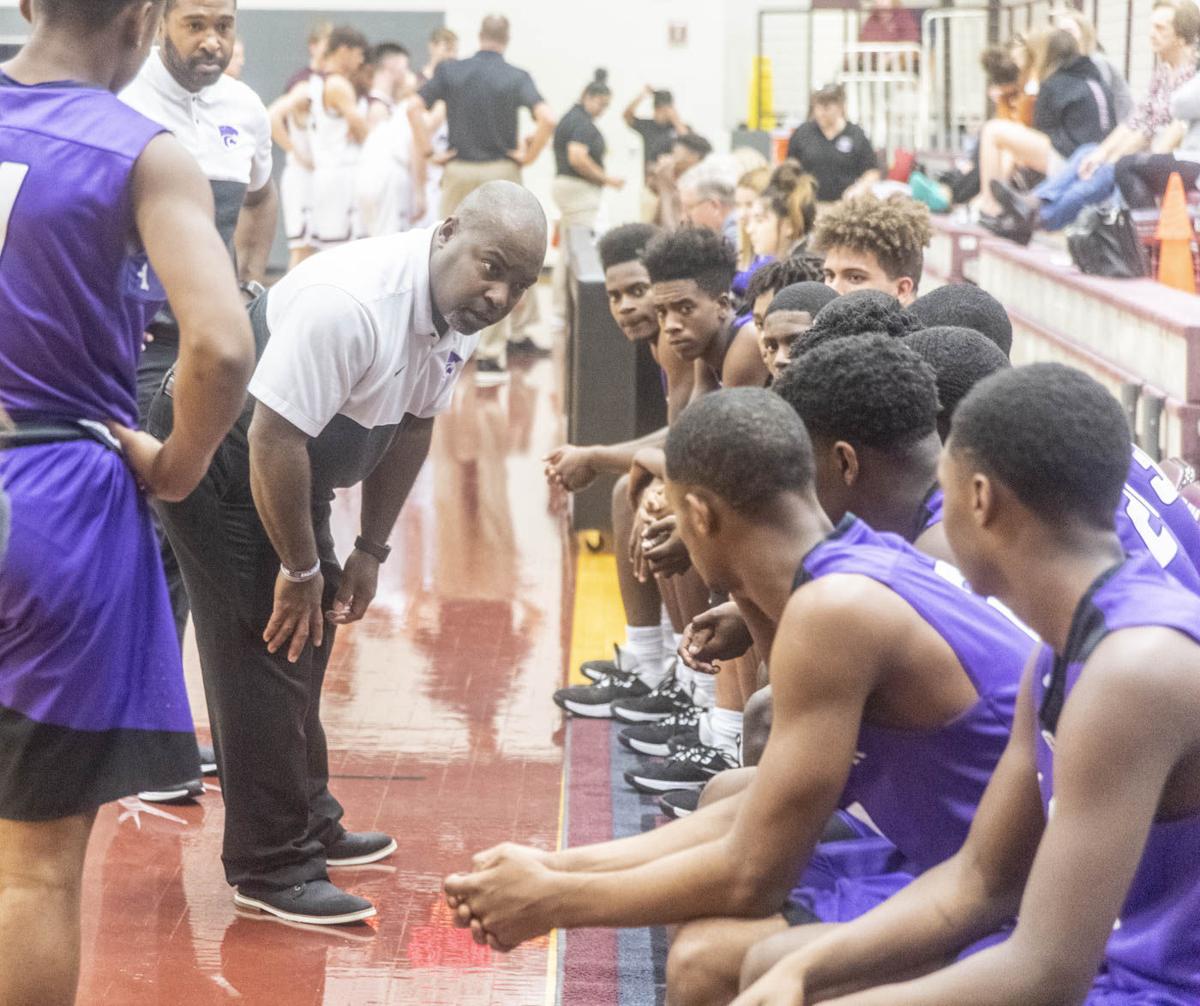 Coach Josey talks to the Wildcats in between quarters Tuesday at Angleton’s game against the Oilers in Pearland. 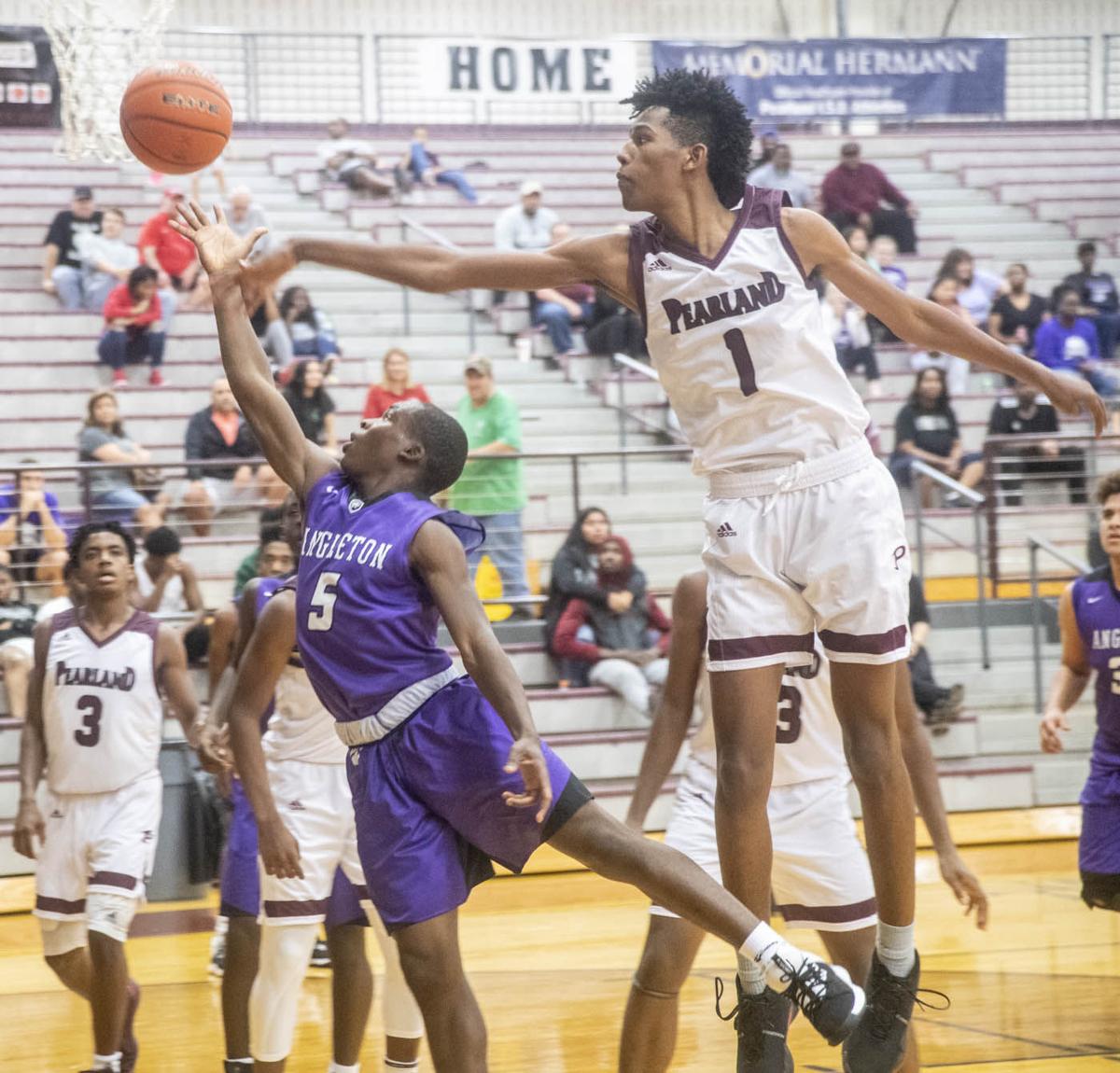 Myalek Woods (5) throws the ball up to score as Pearland’s Robel Desta tries to knock it out Tuesday at the Wildcats’ game at Pearland High School. 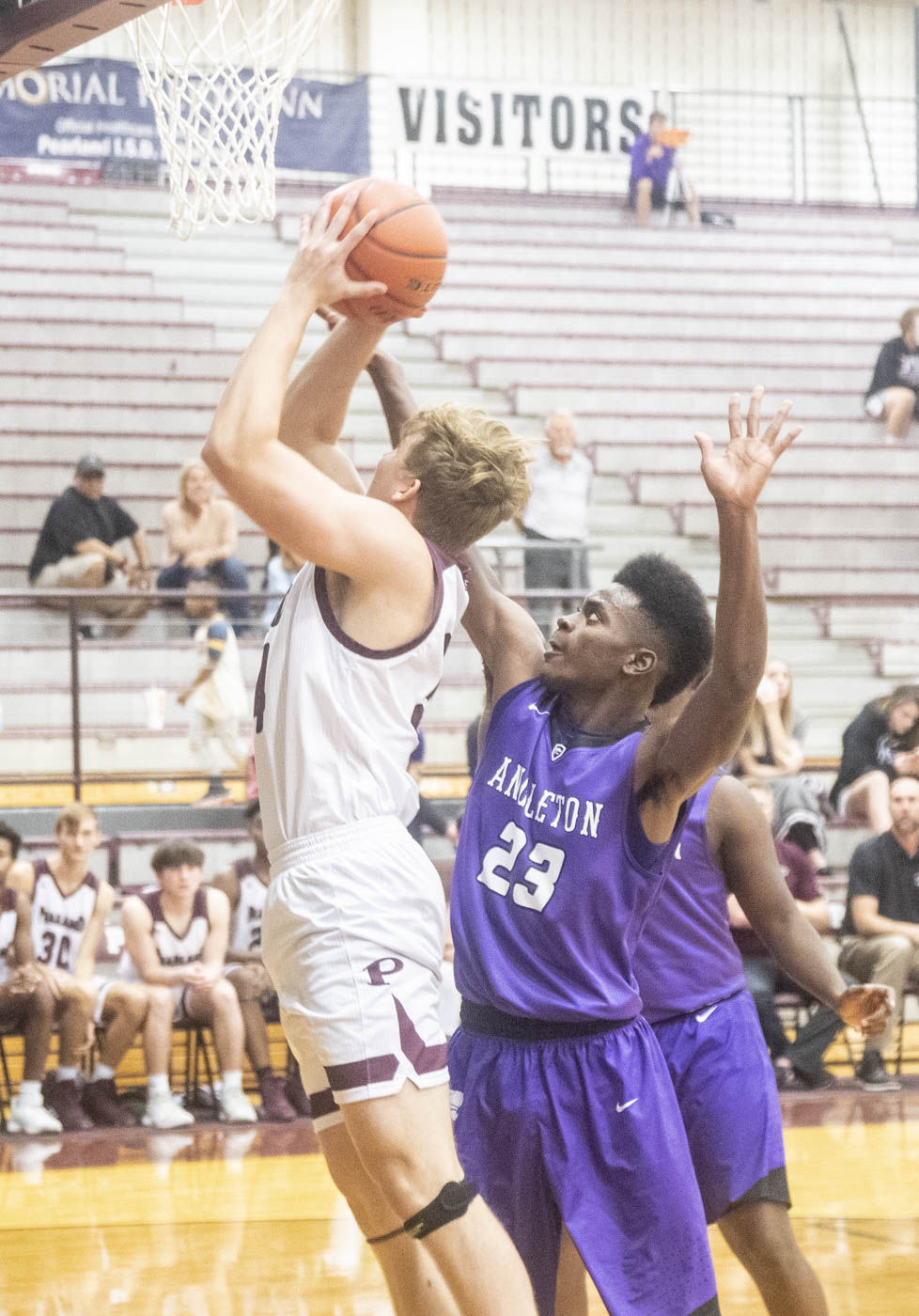 Angleton’s Myalek Woods passes the ball as he is being guarded by Pearland’s Jordan Maxwell during Tuesday’s game at Pearland High School.

Coach Josey talks to the Wildcats in between quarters Tuesday at Angleton’s game against the Oilers in Pearland.

Myalek Woods (5) throws the ball up to score as Pearland’s Robel Desta tries to knock it out Tuesday at the Wildcats’ game at Pearland High School.

PEARLAND — If not for a third period when the Angleton Wildcats were outscored 28-11, the outcome against Pearland on Tuesday on the road could have been much closer than the 77-47, Oiler nondistrict victory.

But eight games into the 2019-20 season, the third quarter has been an issue this year for the Wildcats.

“We’ve been coming out of the half flat, and once again it hurt us,” Angleton second-year coach Thomas Josey said. “We were able to get through at the tournament, but our third quarter has been terrible. We’ve tried everything to get them going, jumping on the press, even changing some offensive things we are doing, and it is just not working right now.”

The Wildcats stayed right with the Oilers in the first half and a 3-pointer by Garrett Patton from the wing pulled them within 28-26. But Pearland’s Derrick Ardoin hit a bucket as time ran down, giving Pearland a 30-26 halftime lead.

Patton had an opportunity to tie the game early in the third quarter but went 2-of-4 from the free- throw line. Then Ardoin, with a 3-point play, started a run in which the Oilers went 8-for-8 from the field, including 3-for-3 from beyond the 3-point line.

By the time Pearland missed its first shot in the quarter, it led 52-37.

However, even during that run the Wildcats stayed close at first. When Lincoln Archie connected on a short jumper, Angleton with within 33-31. Then back-to-back treys by C.J. Walker and Archie kept the margin at 39-34 and 41-37. But that was as close as the Wildcats could come the rest of the way.

At 3-5 on the young season, the Wildcats are coming off a fairly successful McDonald’s Texas Invitational, where they captured the Bronze bracket championship despite their youth.

“It is going to be a challenging year for us; the good thing is the seniors are being leaders and helping the young guys out and keeping their heads up,” Josey said. “Eventually the sophomores and freshmen will get going, but we are a young team, and even we know it is going to be up and down all year.”

Both teams came out a bit cold from the field early in the first period. Angleton’s only lead in the game came off a nothing-but-twine 3-pointer by Patton from the wing, making the score 3-2.

Turnovers hurt each team, with the Oilers committing five and Angleton four in the first period. Eventually Pearland was able to string some buckets together and took a 16-8 lead after one quarter on baskets from D’Antre Boudreaux, Chase Carathers and Boudreaux again. Angleton’s Majestic Ford connected on a 3-pointer right before the end of the first eight minutes of play.

The Oilers started the second quarter on a 7-0 run for a 23-11 advantage and looked like they were ready to blow it open. But a timeout by Josey to calm things down helped the Wildcats to go on a 15-7 run.

“There have been some games where the youngsters have stepped up, but it is more of a consistency thing with them right now,” Josey said. “They are up and down, and that is what you deal with, with young players. Especially with a 14-year-old kid throwing him into an 18-year-old game, and the speed is totally different. Whatever they could do at the eighth-grade level, they are not able to do on varsity level.”

Patton led the Wildcats with 15 points and was their only player in double digits.

Pearland was led by Robel Desta’s 18 points, He did most of his damage on the inside using his 6-foot-7 frame. Boudreaux tossed in 14 for the Oilers.