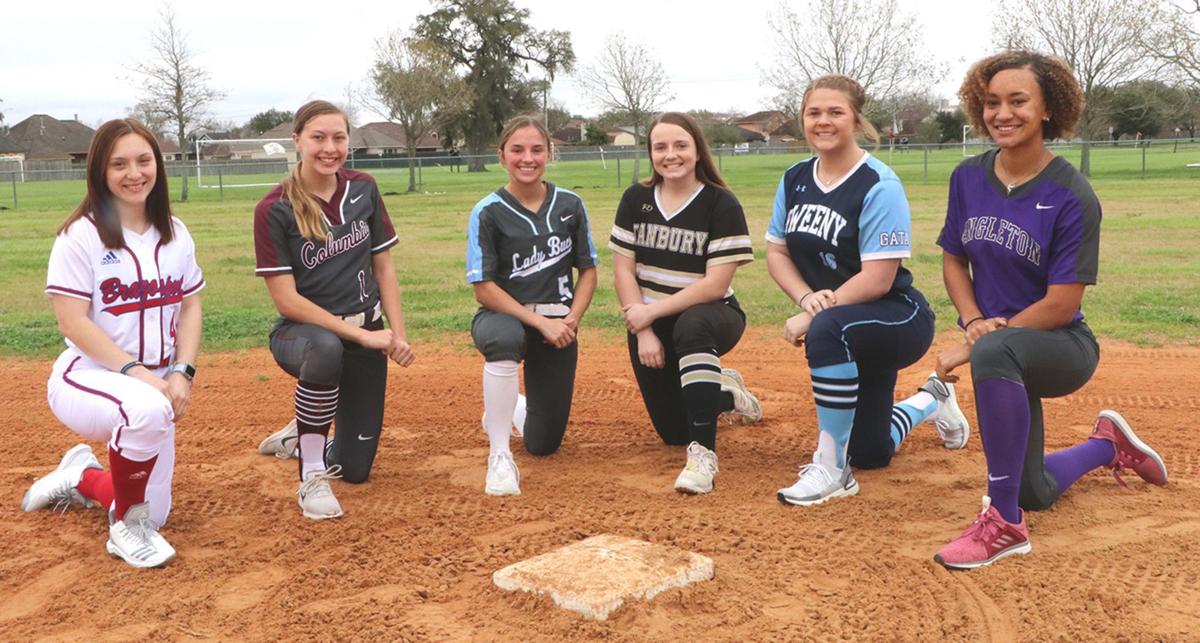 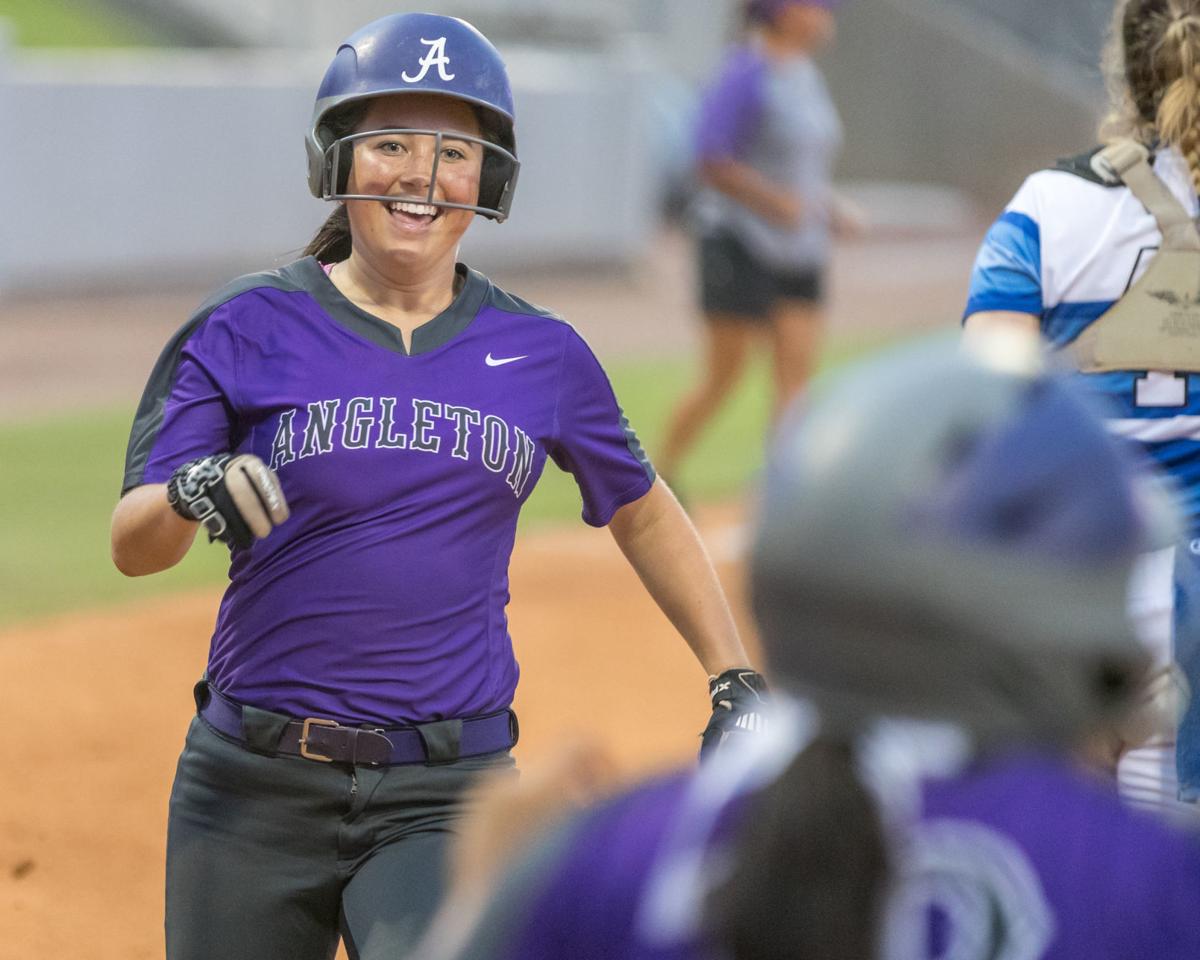 Angleton’s Teagan Whitley scores during Game 2 of the best-of-three series against Barbers Hill in the Class 5A Region III finals May 23 at the University of Houston’s Cougars Softball Stadium in Houston. Whitley is back in the outfield this season as the Ladycats try to repeat as Class 5A state champions.

Angleton’s Teagan Whitley scores during Game 2 of the best-of-three series against Barbers Hill in the Class 5A Region III finals May 23 at the University of Houston’s Cougars Softball Stadium in Houston. Whitley is back in the outfield this season as the Ladycats try to repeat as Class 5A state champions.

A year after two Southern Brazoria County teams made it to the state softball tournament — with Angleton bringing home the Class 5A championship trophy — it’s a clean slate again heading into Monday’s launch of the 2020 season.

Brazoswood, Angleton, Brazosport, Columbia, Sweeny and Danbury will look to get to Austin in June; it would be a return trip for the Lady Panthers, who lost in the semifinals in 2019.

Teams got an earlier start to the campaign with the first day of practice starting Jan. 24 and scrimmages beginning Feb. 1, with the actual season getting underway a little later than years past.

Here’s a capsule look at each local softball team.

OVERVIEW: Seven returning starters earned a lot of experience as part of a young but competitive team a year ago. Oltman has set up a pre-district schedule that will be challenging. The Lady Bucs will also have newcomers junior Alexis Nava, 3B, along with sophomore pitchers Bella Owens and Dara Tanner and freshman infielder Cici Jefferson. Phillips (.494 batting, 41 hits, 32 runs, .567 on-base percentage; .933 fielding; 20-of-23 steals) had quite a junior season last year, as did sophomores, Casas (.451 batting, 32 hits, four home runs, 25 RBIs, .859 slugging percentage; .979 fielding) and Herrera (.349 batting, 29 hits, 26 RBIs) and freshman Del Hierro (.421 batting, 21 hits, 14 RBIs, .621 slugging percentage; 0.891 fielding, 8-of-8 steals).

QUOTABLE: “Lots of excitement surrounds this year’s experienced and talented team,” Oltman said. “We expect to be able to contend for the district title and hopefully well beyond.”

QUOTABLE: “Our dynamics will be different, especially in the circle,” Rubio said. “We still have a potentially explosive offense and defense is solid. Pitching will be a big factor for us, and determining who wants to carry the load or share the load. Our veteran varsity players will be the key to leadership and team chemistry this year on and off the field.”

OVERVIEW: The Brazosport Lady Ships return seven starters with Brimage (.429 batting, 13 RBIs), Zuniga (.396 batting, 27 RBIs,), Dolly (.357 batting, 42 at bats, 15 hits) and Kaale (5-4 overall, 55 innings, 3.70 ERA, 30 strikeouts) all big contributors last season. McClendon could be a big addition and has just been medically released. Freshman Jazelyn Peoples could be heard from before the end of the season.

QUOTABLE: “Breanna Brimage has taken many of the younger outfielders under her wing and is showing them the ropes,” Ducre said. “Simone is in basketball, but we are looking for her to produce more this year as she settles in. Our athletes were so touched by the Kobe and Gigi Bryant tragedy that we have been focusing on treasuring every moment.”

OVERVIEW: Eight returning starters will fill up a majority of the spots for the Lady ’Necks. Despite all that experience, there are only five seniors on the team, and sophomore Mya Savant and freshman Briana Year will join the mix. Of the returning starters some were pretty effective last year, Oakes (.434 batting, .698 slugging, 23 hits), Kyleigh Bragg (3.25 ERA, 88 strikeouts), Newby (.291 batting, 59 plate appearances), Velazquez (.312 batting, 15 hits; .991 fielding percentage) and Hornback (.362 batting, .655 slugging, 65 plate appearances).

QUOTABLE: “I’m looking forward to seeing my seniors step up on the field as well as my underclassmen and make our mark in district,” Guthrie said. “We will be playing some tougher teams in our tournaments, which will help with our mental toughness throughout the season as well as our tough district.”

QUOTABLE: “I am very excited about our new crop of freshman and also very excited about the lineup we return with,” Hansen said. “We are continuing to strive to reach new goals set this season and I know this group will work hard and work together to do so.”

OVERVIEW: A season removed from a trip to the Class 3A state tournament, the Lady Panthers return six starters. The bats of Munson, Garrett (.324 batting, 34 hits, 34 runs; .972 fielding), Lambert (.346 batting, 28 hits; .875 fielding), Harris, Womack and Henken will play a crucial part if the Lady Panthers return to Austin. There will be some newcomers who could help, including Vanessa Crofford, Lilly Schraven, Hayley Matheson and Grace Bracken. East Bernard and Boling are expected to have strong teams, and Tidehaven looks to be tough as well.

QUOTABLE: “We have a strong group of seniors that are expected to lead this team to another successful season,” Bowles said. “We expect this to be a tough district again in 2020.”