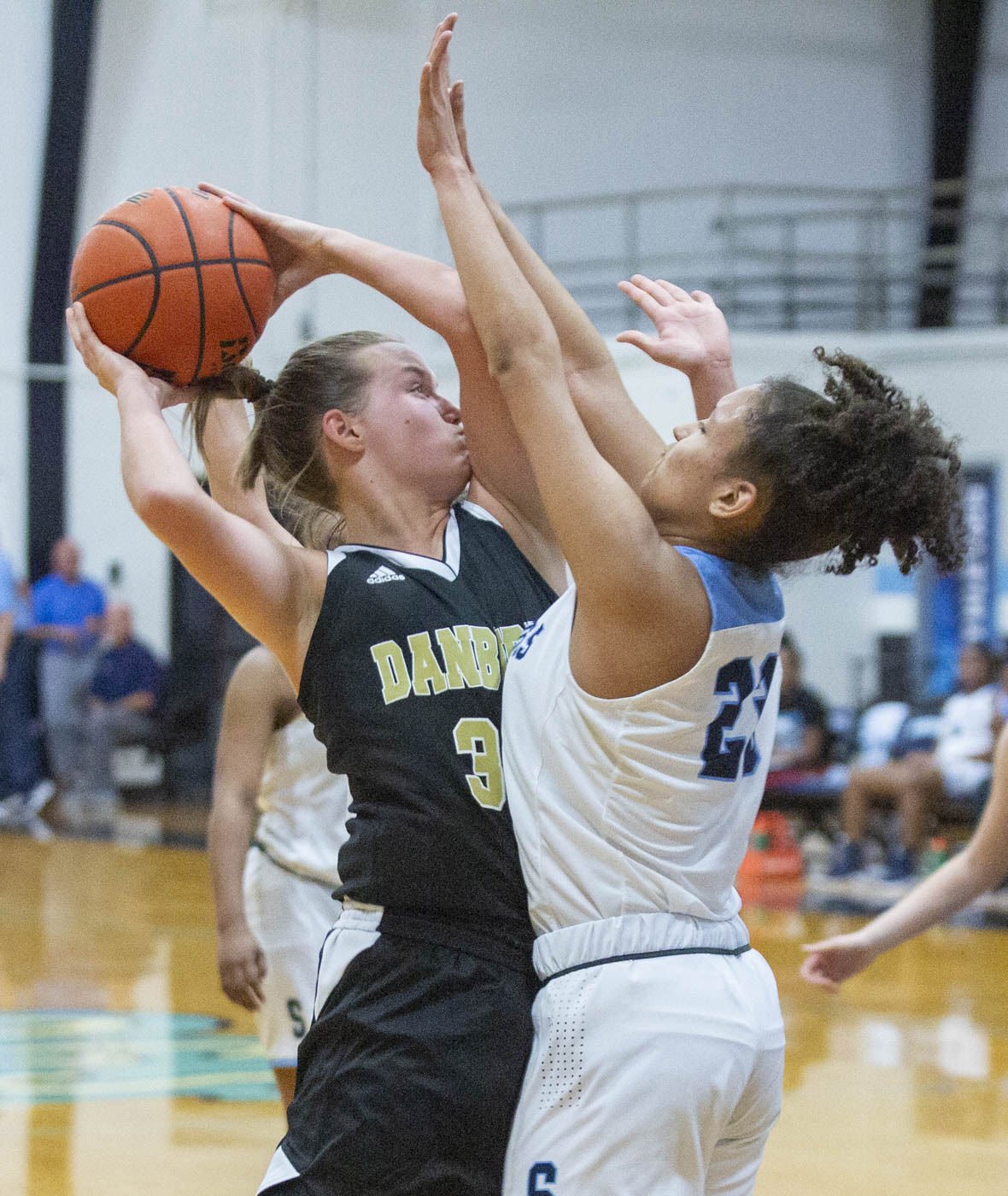 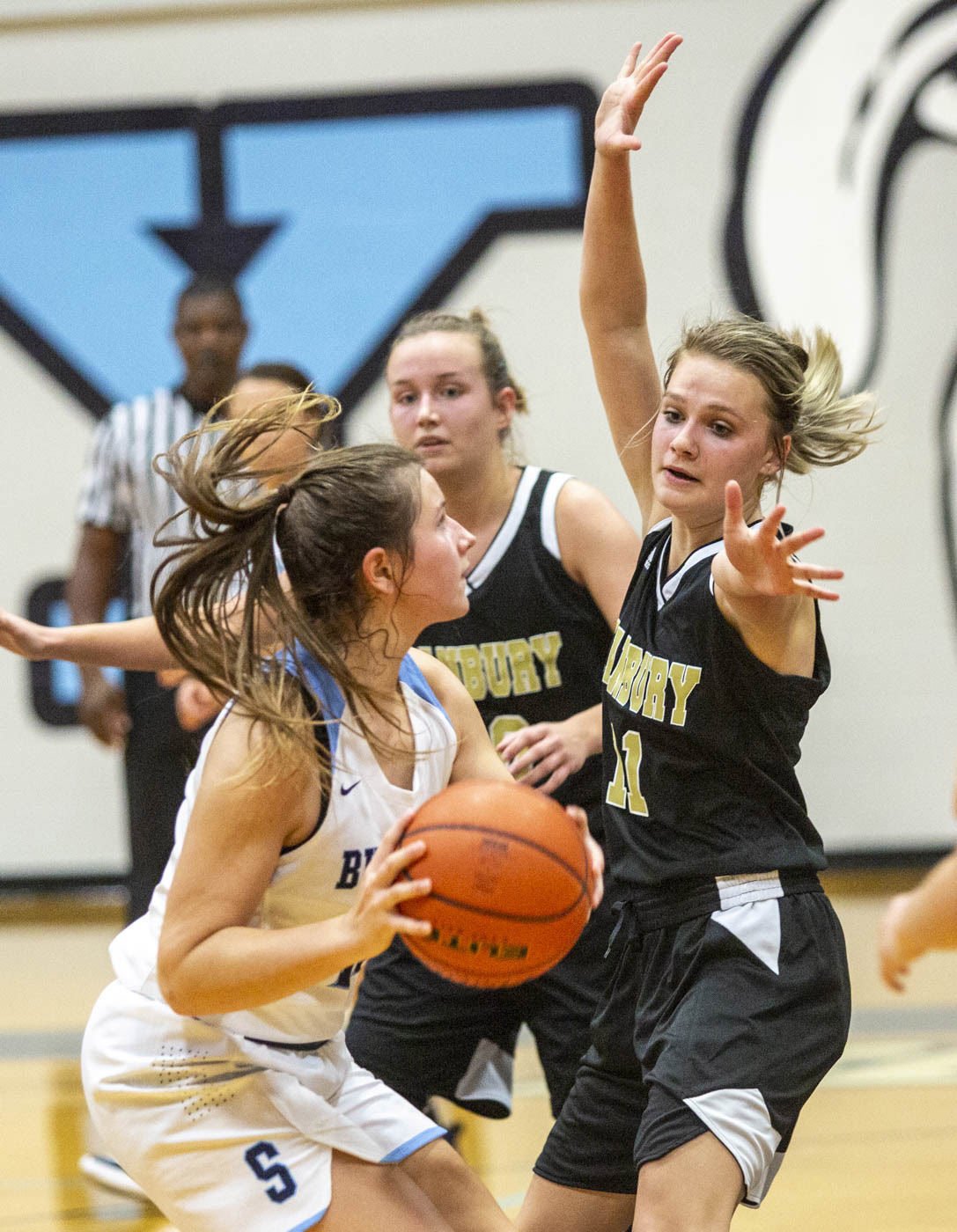 Carsen Harris of Danbury (30) maneuvers her way around Lady Dog Siniyah Runoalds to score Friday at the Lady Panthers’ game in Sweeny. 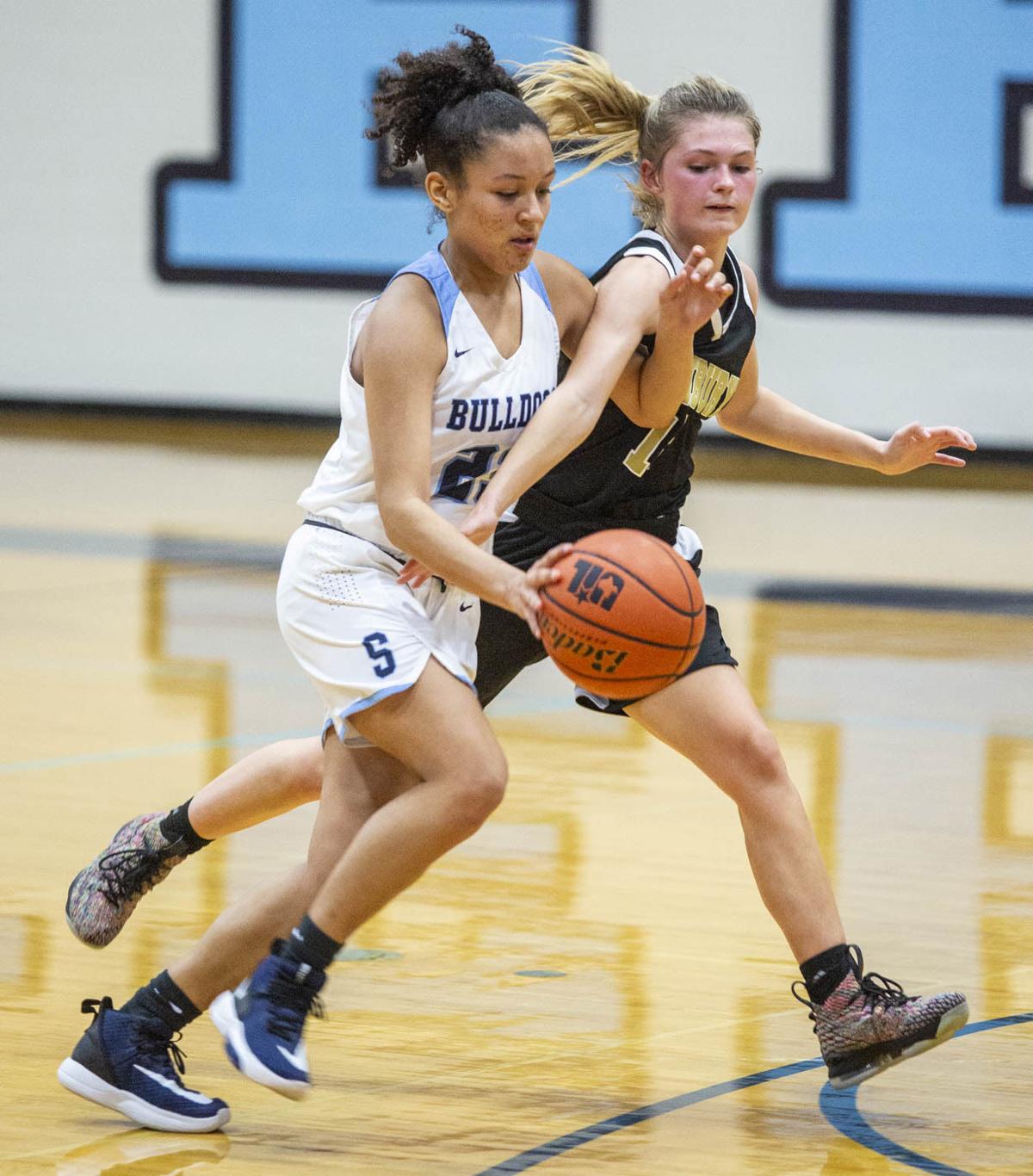 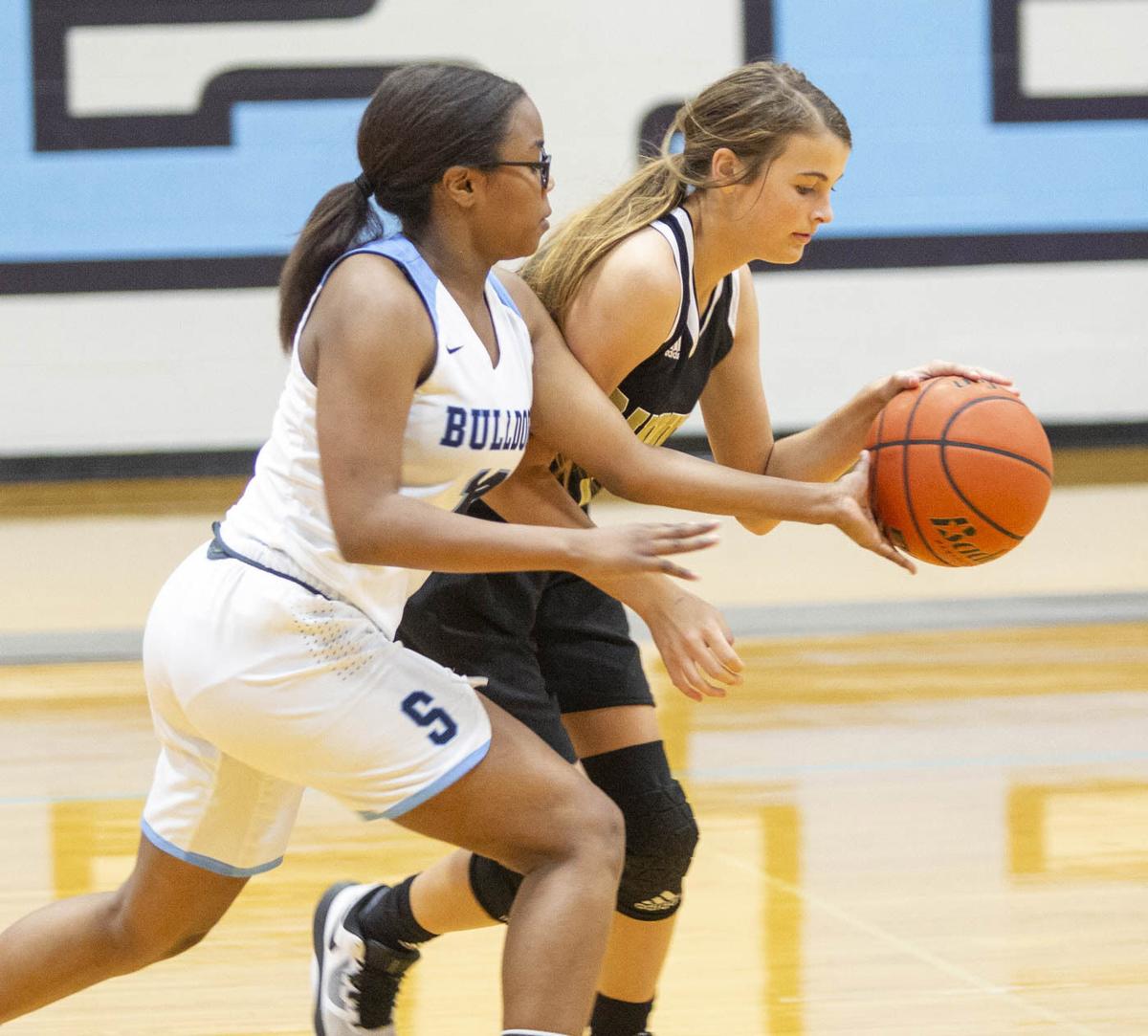 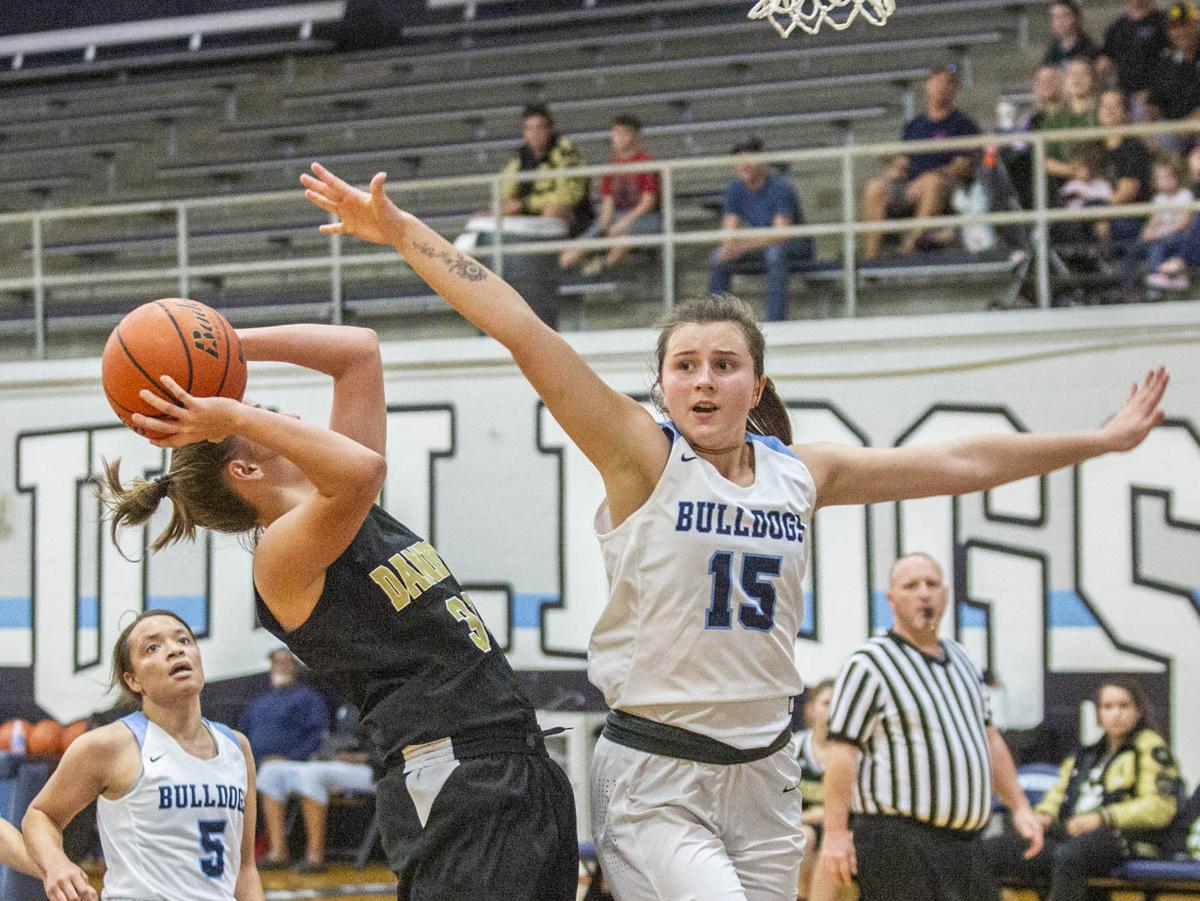 Carsen Harris of Danbury (30) maneuvers her way around Lady Dog Siniyah Runoalds to score Friday at the Lady Panthers’ game in Sweeny.

Missing four starters didn’t stop the Sweeny Lady Bulldogs from finding a way to win at home, going all out in a 53-37 victory Friday over the Danbury Lady Panthers.

“I think we started putting more effort in hustling and not trying to conserve energy and just trusting we’ll call timeout if we see they need a break,” Sweeny head coach Dwayne Stevens said. “Going into these games with a six-man roster, a lot of times they think they have to conserve energy on defense, and we tell them it’s better on offense by being patient and defense give us everything you’ve got.”

That relentless effort by the Lady Dog defense forced 23 turnovers, creating opportunities for transition points and getting to the free-throw line. Sophomore guard Asha Strauther in particular took advantage, but her tenacity made Sweeny’s roster even thinner for a time.

Early in the fourth quarter, Strauther tried to split two defenders on the perimeter and awkwardly fell to the hardwood. Her injury left the Lady Bulldogs with just five healthy players to preserve a 45-32 lead with seven minutes to play.

A steal by sophomore guard Ashley Dailey led to a quick transition bucket to make it 47-33, and the Lady Bulldogs kept Danbury at bay the rest of the way, with Strauther’s late return helping seal the effort.

The Lady Panthers led 15-12 after one quarter, holding the Lady Bulldogs to only two field goals in the first 8 minutes. Sweeny kept it close by drawing fouls and hitting 6-of-10 from the foul line in the opening period. Lady Dogs finished 14-of-22 from the line, while Danbury was 5-of-12.

The Lady Bulldogs went on a 7-0 run in the first three minutes of the second quarter on their way to a 33-24 advantage at intermission. Sweeny’s work on the backboards helped fuel the transition game, with forward Madison Roman snagging nine rebounds to go with four points in the first half.

Lady Panther wing Carsen Harris had six points and six rebounds at the half.

Strauther hit a 3-pointer to start the third quarter, then forced a steal and fed Dailey for a lay-in. Danbury, which had the rebounding edge for the game 38-36, created second-chance opportunities but couldn’t convert them into points.

“Our girls di d awesome getting their rebounds and boxing out. They did an awesome job, and sooner or later our shots will fall,” Danbury head coach Julie Sample said.

Sweeny’s next game will be at 2:30 p.m. Friday at Louise. Danbury will travel to play Van at 6 p.m. Tuesday.