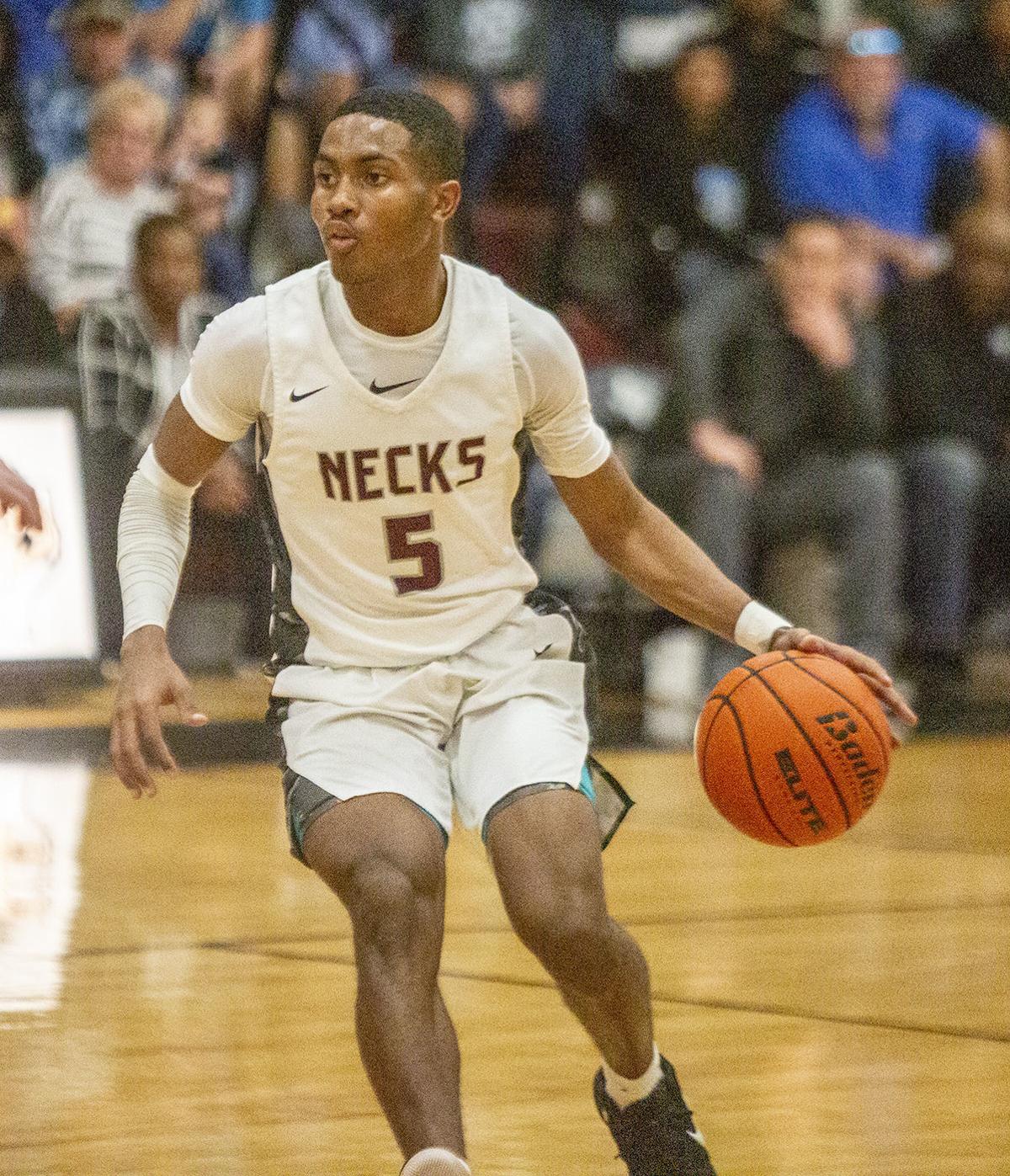 Sultan Abdullah of Columbia looks for an opening to pass Jan. 24 at their home game against Sweeny. 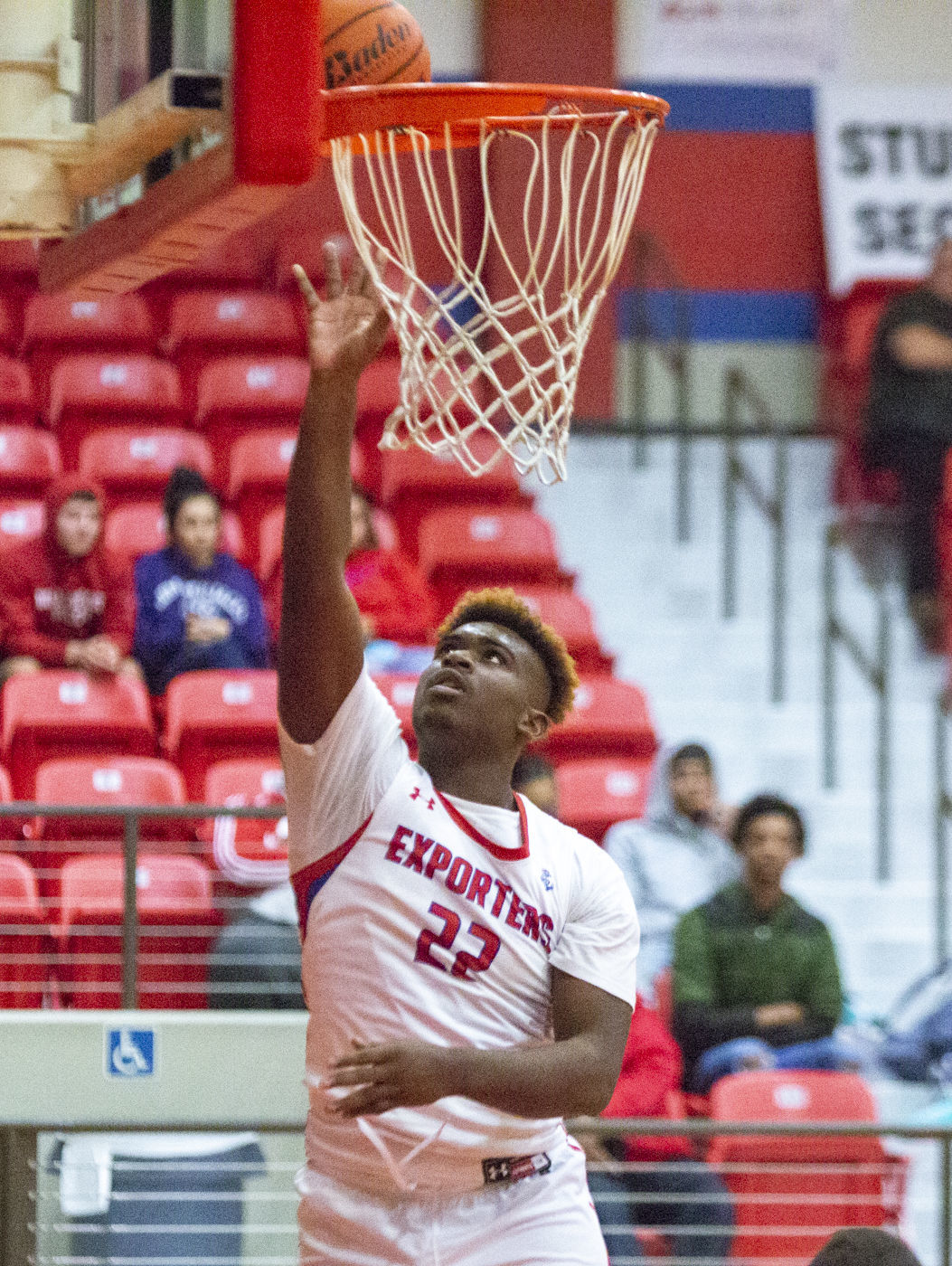 Brazosport’s Darrael Preston scores on a layup Jan. 21 during a home District 24-4A game against La Marque.

Sultan Abdullah of Columbia looks for an opening to pass Jan. 24 at their home game against Sweeny.

Brazosport’s Darrael Preston scores on a layup Jan. 21 during a home District 24-4A game against La Marque.

Both teams are playoff-bound, but the battle for the higher seed still needs to be settled.

The Brazosport Exporters will take on the Columbia Roughnecks for the third time this season at 6:30 p.m. today at Brazoswood High School’s Performance Gym with the winner leaving with the second seed in District 24-4A.

The teams split the season series and are tied in district play at 4-4 behind district champion La Marque.

“We’ve played them twice competitively. The first game we lost and we felt like we had a really good chance to win that game, but we came back at home and won and that gave us a lot of confidence going forward,” Columbia head coach Henry Valladares said. “They play hard no matter what situation, what team they face. They pride themselves on having that extra gear, and that’s something we feel we can match.”

The Roughnecks are led by senior Cameron Ward, who averages 20.6 points per game and has been the centerpiece for the ’Necks for the past three years.

He’s someone Brazosport head coach Travis Pittman has seen multiple times and knows is who they need to stop tonight.

“We need to do a better job on Cam. He came out early and hit three 3-pointers in our last game and just started hot,” Pittman said. “How do we eliminate that, what happened on those plays, and how do we prevent that from happening? We know what they do and they know what we do, so it’s going to be about who can impose their will and that’s who will come out ahead.”

For the Exporters, senior Raylean Bell has been the standout player for the Ships. He’s been an exciting player for Brazosport with an ability to score from behind the arc, in the paint and at the free-throw line.

Valladares has been impressed with what he’s seen from the Exporter guard.

“He’s their leader. I love watching him play both ends of the court,” Valladares said. “The way he handles himself, his attitude, he’s one of my favorite players to watch. It’s a credit to what they do at Brazosport, a credit to him and to our district. We’ve got some dogs in our district.”

The second seed in the playoffs means a lot for both teams considering they’re playing an extra game instead of flipping a coin for the higher seed. Whoever wins will play the Washington Eagles (13-18) from District-23-4A on Tuesday while the loser will play North Forest (14-13) either Monday or Tuesday.

“You never want to go into the playoff with a loss,” Pittman said. “If we can get the win tomorrow night, that’ll be two in a row for us and give us momentum heading into the playoffs.”

For Valladares, getting the two seed would mean getting as close to the team’s goal as possible.

“You always want to finish as high as you can in district,” he said. “Just the status part alone is something we want to strive for. You always want to strive for first, but La Marque had a great year so we’re striving for second. It does help playoff-bracketwise, and it’s going to be tough either way because every team we face deserves to be there, but we feel we have a better chance to make a run there rather than the three seed.”

The Bulldogs will fight for the last playoff spot from District 24-4A when they play the Bay City Blackcats at 6 p.m. today at Boling High School.

“It’s been a hard year, but I’m proud of the boys for getting this far,” Sweeny head coach Robert Cash said. “I wish we would have taken care of business on Tuesday, but if we win we’re in, and it’ll be special because it’ll be their first time making the playoffs in 10 years.”

Sweeny lost to Brazosport in their final regular district game, 88-55. A win would have made tonight’s play-in game against Bay City unnecessary.

Both teams are 2-6 in district play and split their two games during the season. Cash is in his first year as head coach at Sweeny and is excited about ending the school’s playoff skid. He is confident the Bulldogs can come out on top today and secure a special moment in school basketball history.

“We’re right here in the mix of it. That’s a big step for this team, and it’s exciting to be in this place,” Cash said. “We had a good week of practice, and I think it was a good loss on Tuesday because I don’t think the kids knew how to handle that new type of pressure. Now they have a second time and hopefully we’ve learned and can improve on that.”

If the Bulldogs beat Bay City, they will play Tuesday against Houston Yates (21-3), the top seed from 23-4A.