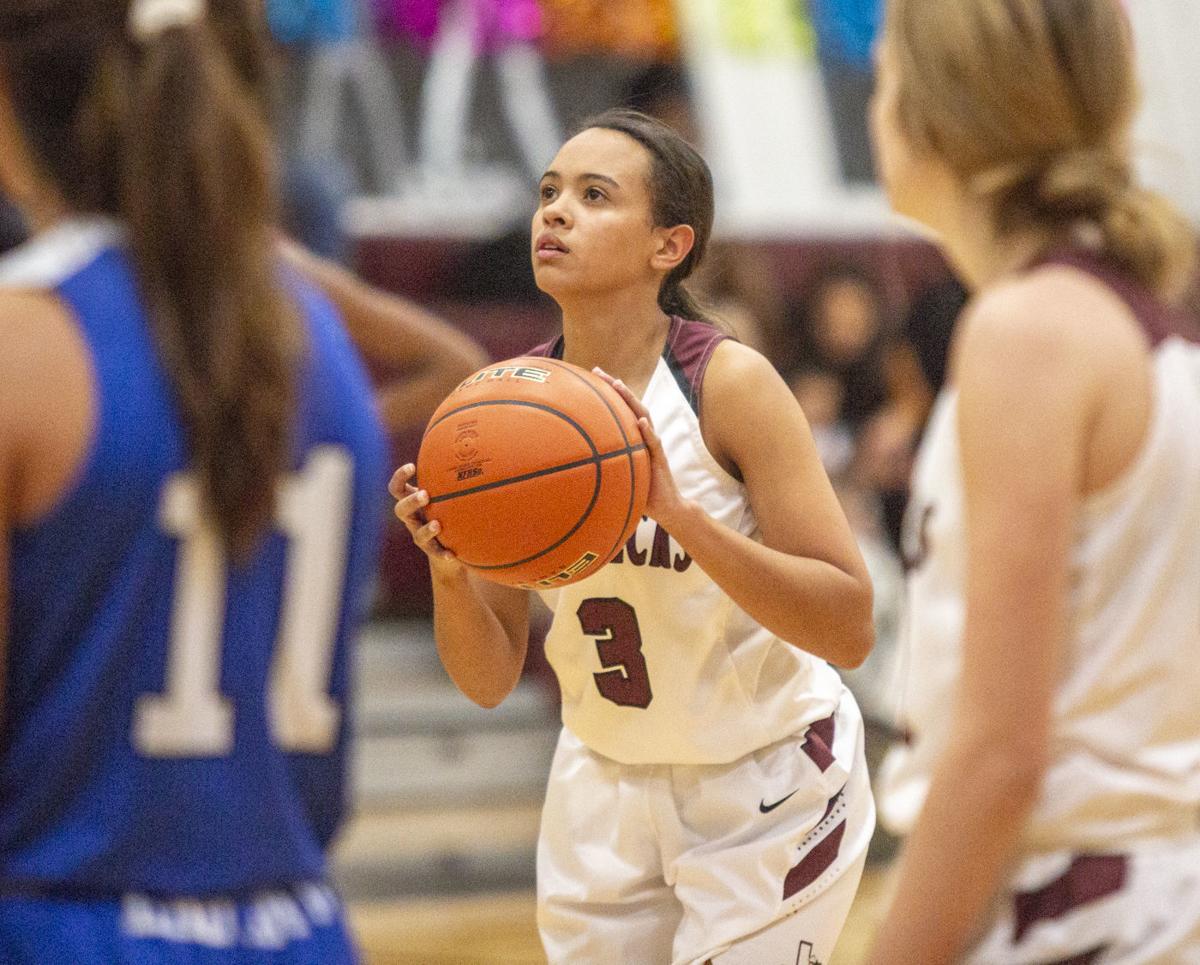 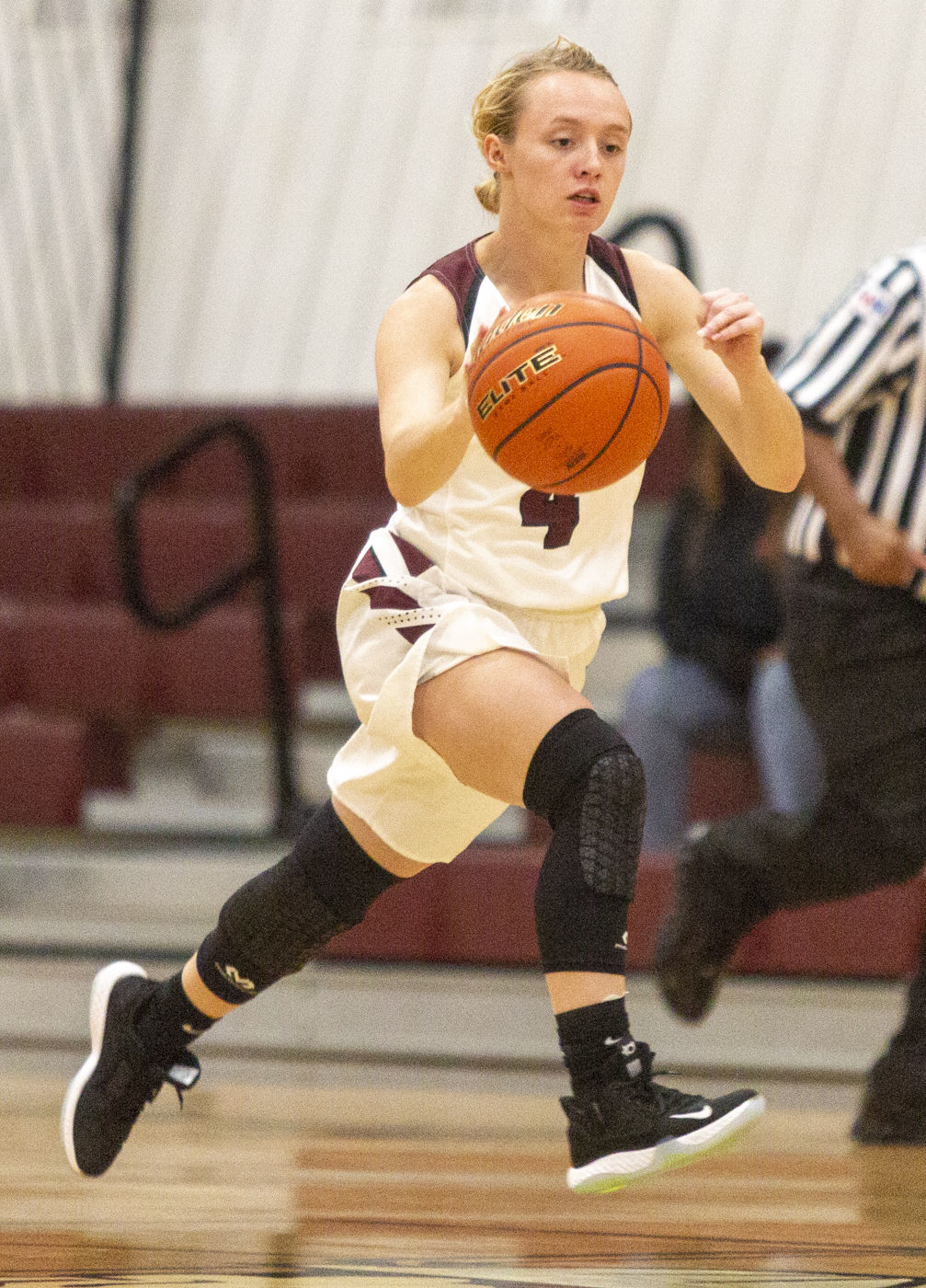 Lady ’Neck Myrian Wessells drives the ball upcourt on the way to a basket Dec. 17 against Needville. 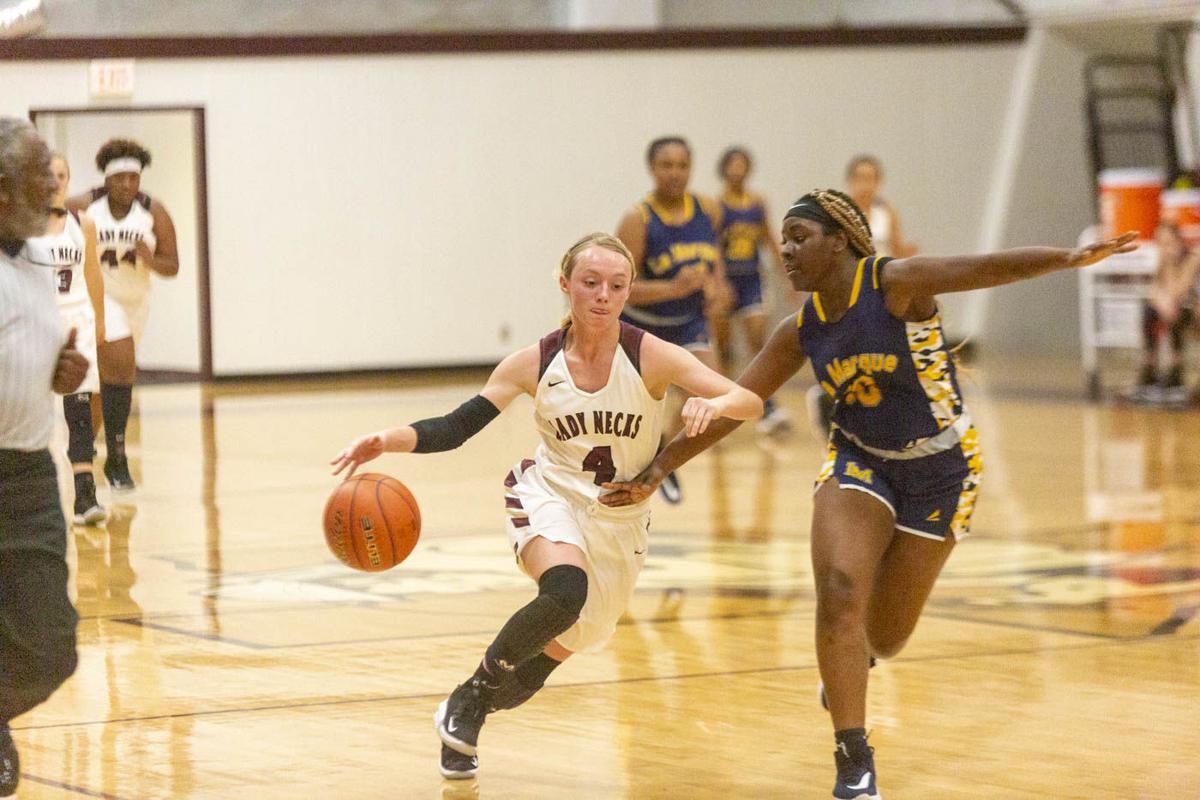 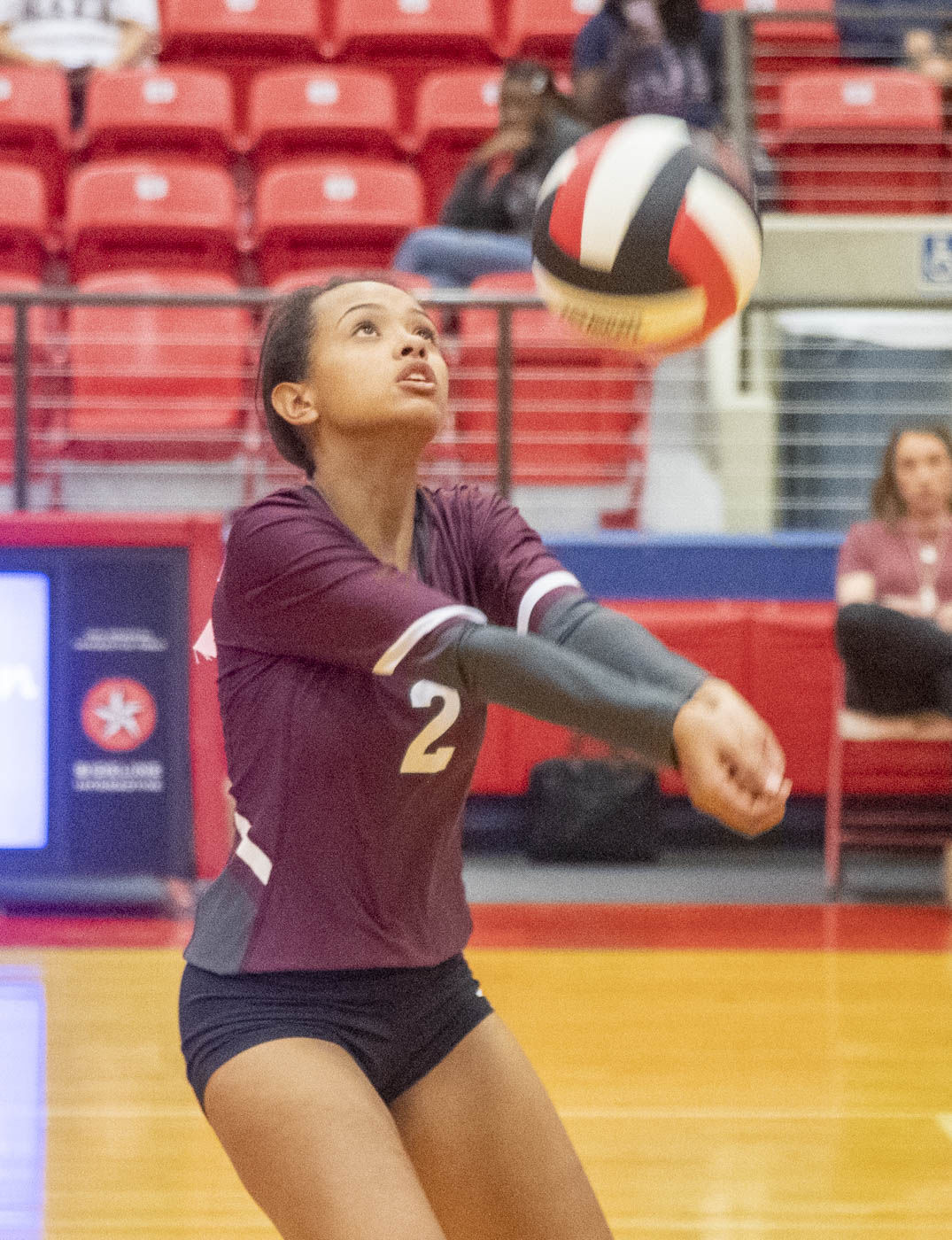 Columbia’s Jada Rhoades focuses on the ball on Oct. 29 during the second set in a District 24-4A showdown at Brazosport. Rhoades was voted Co-setter for the 2019 season in the all district selections.

Lady ’Neck Myrian Wessells drives the ball upcourt on the way to a basket Dec. 17 against Needville.

Columbia’s Jada Rhoades focuses on the ball on Oct. 29 during the second set in a District 24-4A showdown at Brazosport. Rhoades was voted Co-setter for the 2019 season in the all district selections.

Competitive throughout their youth, Columbia Lady ’Necks Jada Rhoades and Mariah Wessells both made it to the top of academia.

As freshmen, both came to understand the importance of academics and now each one in their senior season reached a climax. Rhoades and Wessells were both honored as Texas Girls Coaches Association Academic All-State in basketball and volleyball as seniors.

“For me it felt good because I’ve always wanted to be honored by my academics which has been the main part for me how sports has affected me,” Rhoades said. “It is one of the accomplishments that I’ve had on my list to make because of all the sports that I play.”

Through all four seasons, Rhoades played volleyball, basketball and softball. Though she was improving in sports, it became apparent to her right away as a freshman she needed to change some things off the field.

“I wasn’t on top of all of my academics in my freshman year, but in my sophomore year I improved a lot in the classroom,” she said. “When I didn’t make the National Honor Society as a sophomore, it just made me want to work harder at my grades so that I could get into it.”

For Wessells, it was a different story coming into high school as she was also in the National Honor Society.

“I was one of those freshman that really cared about my school work. My parents have never gotten on me for bad grades,” Wessells said. “Whenever I would get a B, I would stress about it because if I wanted to go to a certain college. In high school academics is more competitive and time-consuming. Teachers want the work done when it is due so knowing all that, I started teaching myself to take care of everything early if possible.”

“In academics, most of those students want to be at the top,” Wessells said. “Believe me, it’s gotten difficult at times because I also am a dual-credit student taking college courses as well. Basically, I’ve tired to focus on taking care of most of my school work at school with the limited time I have. Plus, I also work.”

With a 3.9 GPA, Wessells ranks 44th out of 213 graduating students at Columbia High School.

Rhoades is ranked 53rd with a 3.6 GPA and as a junior made it into the National Honor Society.

“Once I made it in, I worked even harder at my grades because I wanted to stay in NHS because for me it was just a big deal to be in it,” Rhoades said. “The challenge for me was having some other people around you who pushed themselves to be better in academics. That helped me push myself in trying to do the same.”

As a setter in volleyball and point guard in basketball, Rhoades understood the importance of being in charge. But there were challenges along the way with playing three sports.

“I was going from one sport to the other, so in a way, I stayed in shape because of that,” Rhoades said. “But it got tough academically because of the schedules that I kept with both academics and sports. At times, I would get home real late and just trying to get homework done at times was challenging. Through the years I found a way to balance both. By my sophomore year, I learned how to manage the three sports and academics. But then it got hard again when I started taking college courses over the summer before my junior year.”

In her final year, Wessells experienced something that had never happened to her in her previous three years of school.

“This has been the hardest but easiest year at the same time because I am not taking as many classes as I did in my first three years,” she said. “The only hard class this year is my college class, which is chemistry. That’s been my B class this year and it’s been difficult keeping my grades up in it. I don’t get too upset about it, but I know I should have done better. Even though it is a college course, I just realize that I should have tried harder.”

Rhoades and Wessells have both prospered because of academics and athletics. Both said one could not work without the other because in order for both to play their favorite sports, they needed to do well in the classroom to compete on the field.

“Sports has always helped me do better in school because if I didn’t have the grades, then I couldn’t play,” Rhoades said. “And there was no way that was going to happen, especially to me not playing the sports I loved. Plus there isn’t anything wrong with being smart because of the opportunities one gets, especially after high school with scholarships and getting into colleges.”

Not a firm decision yet, Rhoades might attend Blinn Junior College hoping to possibly walk-on in softball. But she might have other opportunities elsewhere as well.

For Wessells, she will finish her basic classes at Brazosport College and then head to UTMB in Galveston.

Rhoades and Wessells both want to be nurses.