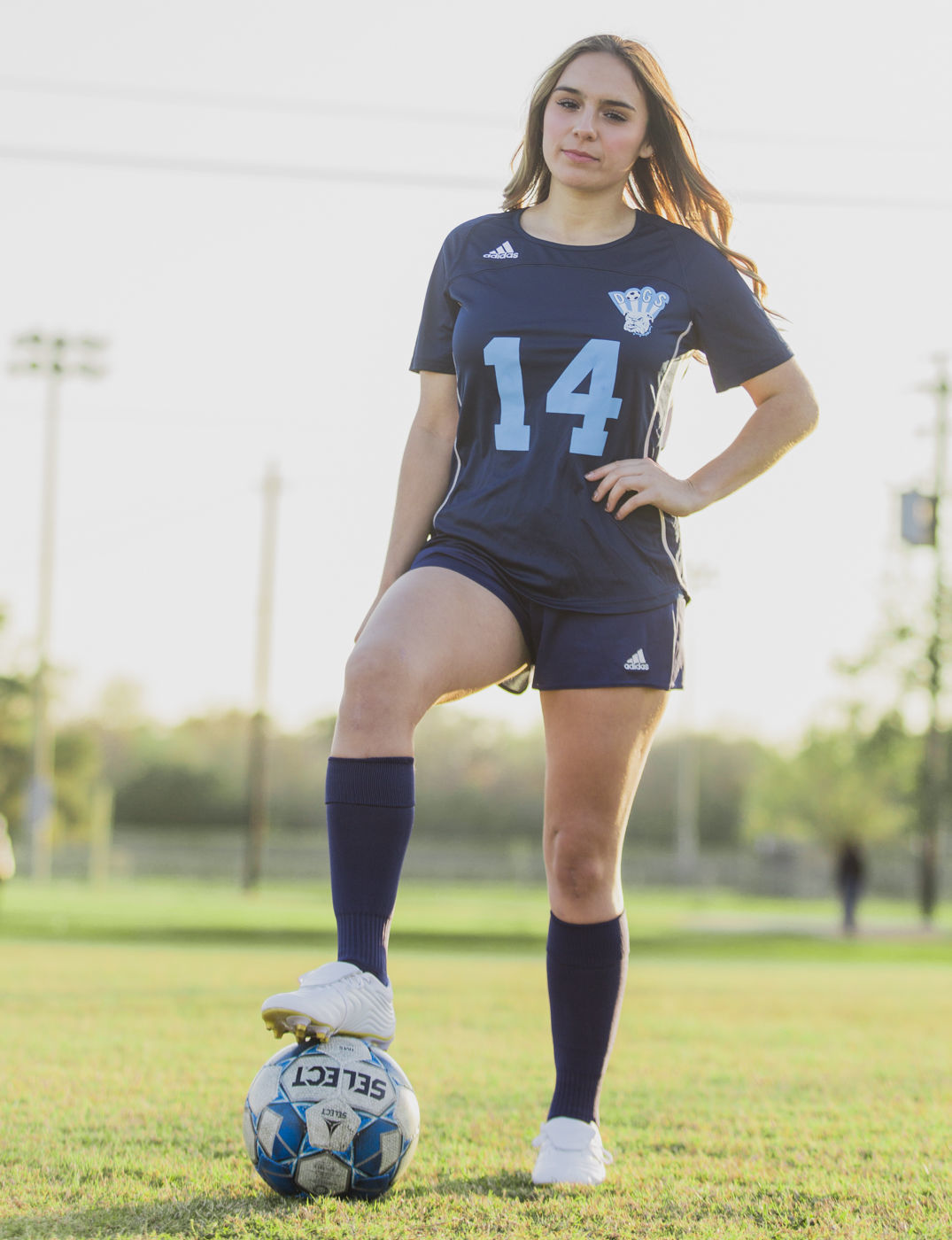 Sweeny Lady Bulldog team captain; Ansley Blake is in her senior year and wants to finish it on the field. 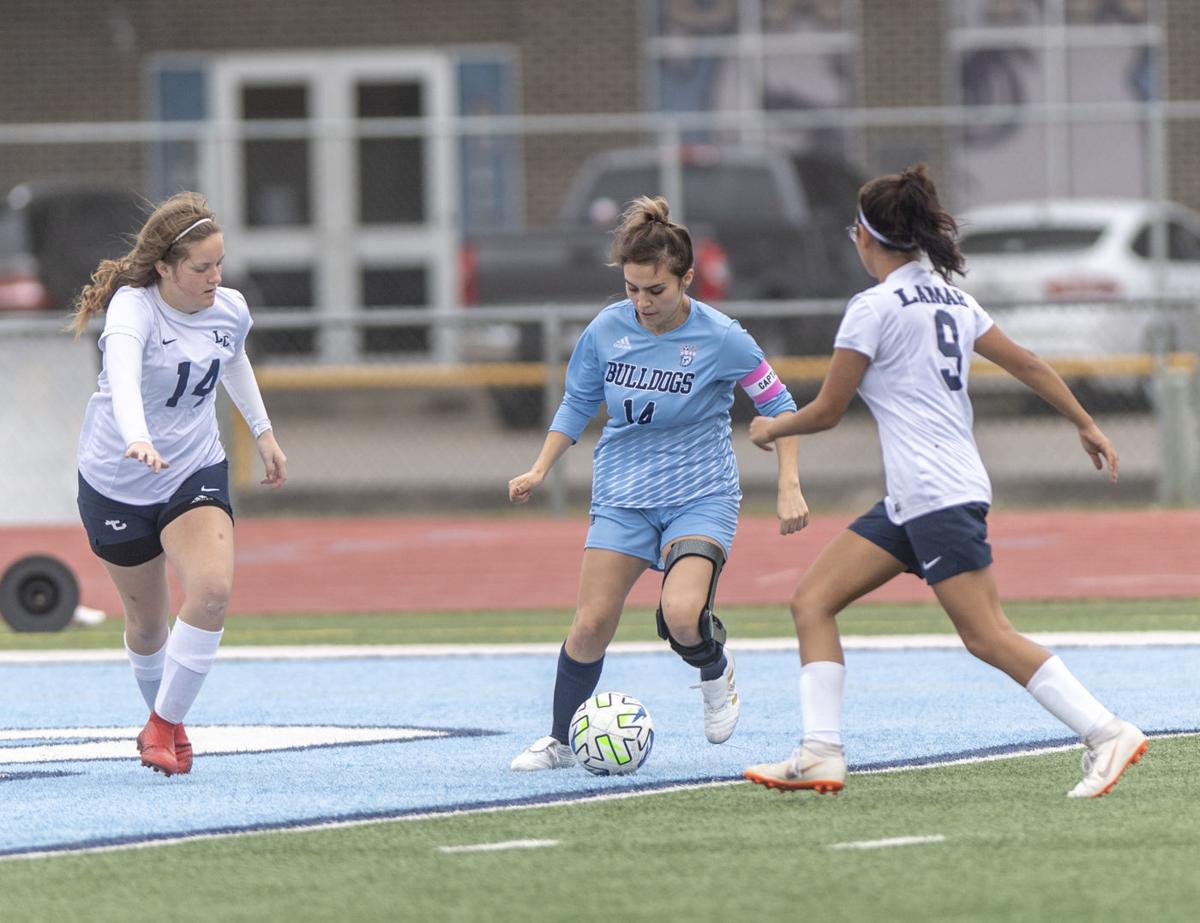 Ladydog Ansley Blake (14) attempts to maintain control of the ball while Lamar Consolidated players Melanie Chavarria (9) and Natalie Schell close in during Friday’s game in Sweeny. 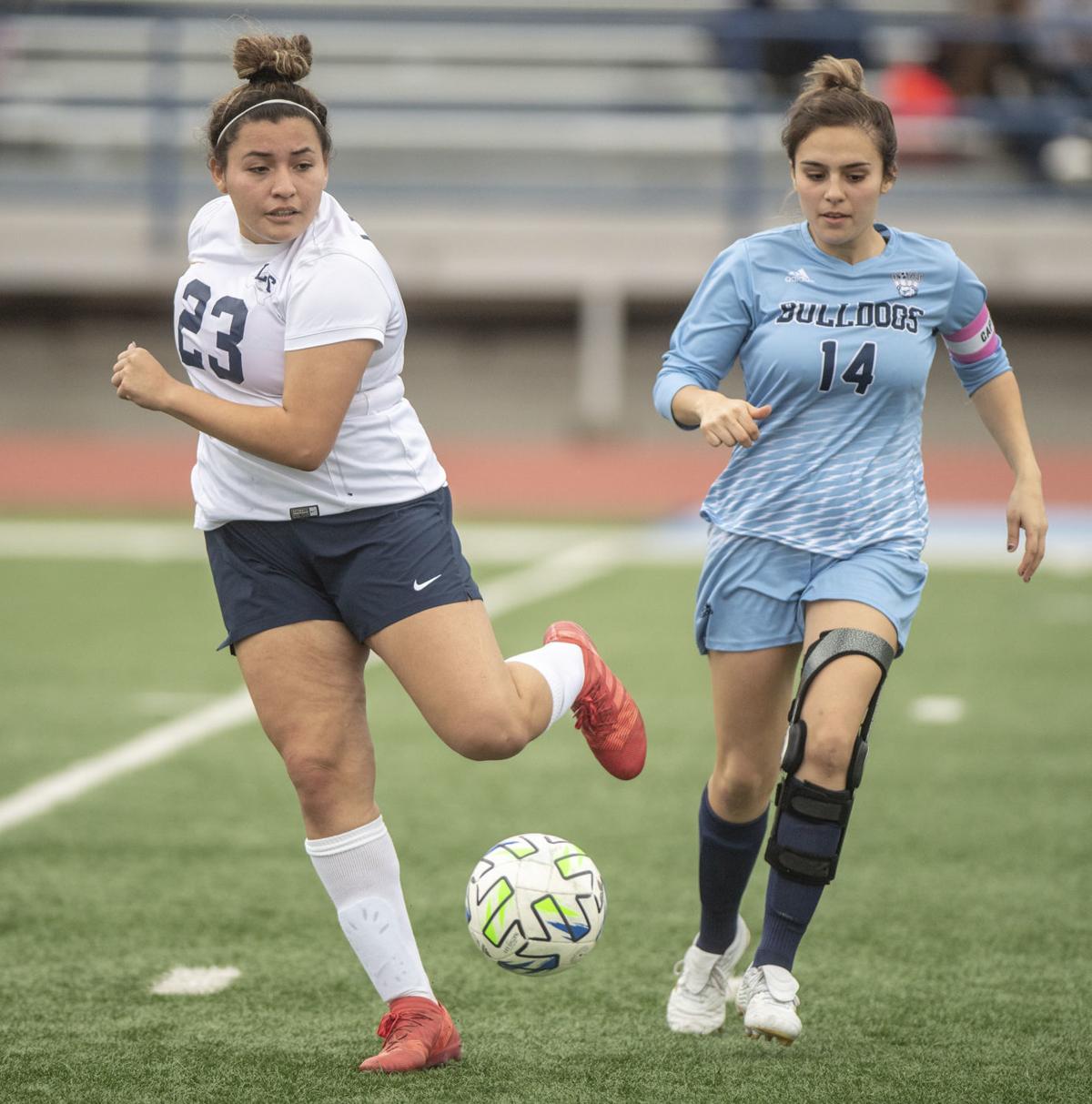 Lady Mustang Korina Crisostomo (23) kicks the ball before Sweeny’s Ansley Blake (14) has a chance to make a move Friday at Bulldog Stadium. 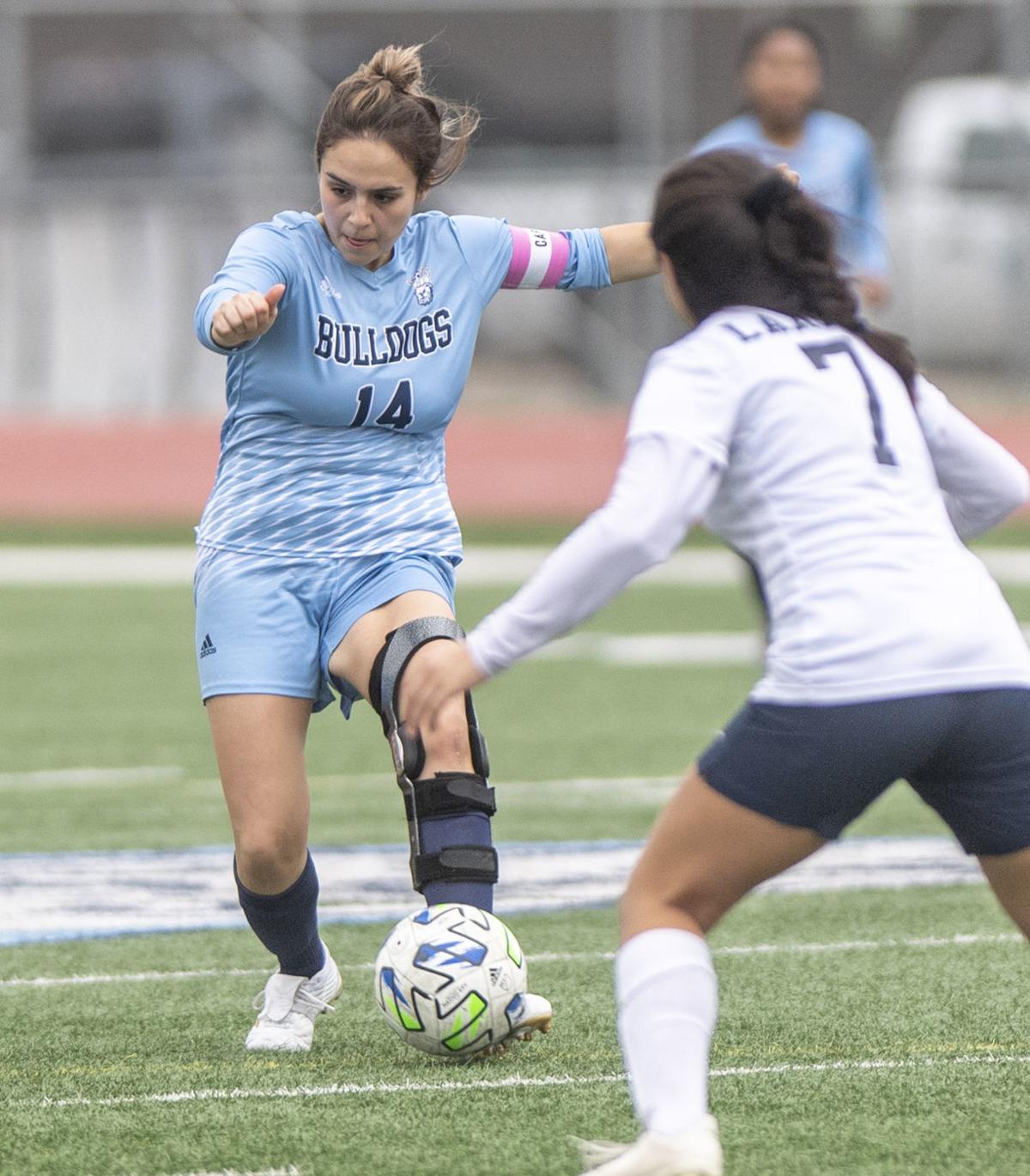 Sweeny Lady Bulldog team captain; Ansley Blake is in her senior year and wants to finish it on the field.

Ladydog Ansley Blake (14) attempts to maintain control of the ball while Lamar Consolidated players Melanie Chavarria (9) and Natalie Schell close in during Friday’s game in Sweeny.

Lady Mustang Korina Crisostomo (23) kicks the ball before Sweeny’s Ansley Blake (14) has a chance to make a move Friday at Bulldog Stadium.

SWEENY — Sweeny’s Ansley Blake has played soccer since she was 4-years-old and to wrap up her career with the sport as a senior, Blake wanted to make sure she finished it on the field with her Lady Dog teammates.

Blake’s journey with the sport hasn’t been the easiest. In fact much of the past four seasons has been spent recovering from two knee surgeries that ended her freshman and junior years.

But if Blake had to do it all over again, she wouldn’t change a thing.

“When I was younger I tried other sports but none of them made feel as excited like with soccer,” Blake said. “Along the way I tried ballet, but wearing a tutu wasn’t my thing. I also swam for two summers, but I really didn’t enjoy the waiting for your event to come up. But whenever I played soccer I was always in constant movement which is something that I’ve enjoyed about the sport. It’s also a sport that just brings teams together.”

A forward with the Lady Dogs, Blake is coming off tearing her left knee last year during the District 24-4A season.

“I just planted my left foot on the ground and when I tried to make a quick move, it just gave way,” Blake said.

Realizing right away how bad she was hurt was agonizing for her. Mostly because of where she stood with the game and moving forward she hoped it would continue to be something in her life she could depend on.

“My heart sank to my stomach because I couldn’t believe this was happening again,” Blake said. “Mentally it was harder, because I wanted to play soccer in college and it was about that time, when I was suppose to go to camps and try to get noticed by colleges. So for me it was just hard getting over that.

“Physically it was easier to come back, because I knew the work I had to do in order to get back.”

As a freshman on varsity, Blake collided with the goalkeeper during an attack to the net as she suffered an ACL tear.

“That one was scary to me, because I had never been hurt before other than a sprained ankle in the sport,” Blake said. So the surgery part alone was scary for me.”

By keeping family, friends and Sweeny trainer Derek Cook close by, Blake was able to make it back on the field as a sophomore.

“Our athletic trainer was real good in my recovery with getting me stronger and just advising me on what to do to get better,” Blake said. “It took me eight months to recover and I couldn’t walk for six weeks from that torn knee. But what I learned most from that tear was to be mentally strong and just push myself every day to get better to get back on the field.”

“At times just like with the first tear, I second guess myself with my knee, but mostly because I am just trying to get past the pain,” she said.

During that match against the Lady Mustangs she got hit on her knee which had a heavy brace.

“I just took a deep breath after that, but I know that I am not 100 percent yet, but I am getting close,” Blake said.

She also came to understand that playing at the next level, just wasn’t going to happen for her. But through it all, she also found a new calling for her.

“I really kind of made my mind up that I was just going to go to school at Texas A&M,” she said. “But this experience has taught me a lot and kind of led me to know that I want to be a physical therapist to help others get over injuries.”

She’s set a few goals for herself in her final season on the pitch. For one Blake wants to lead the Lady Dogs in scoring. And for another, Blake wants to finish on the field.

“I wanted to come back stronger and play as hard as I could especially for this season,” she said. “I really want this to go on forever, but I just think about when I first started playing especially when I was a freshman. Now to think that it will be over after this season is kind of crazy for me.”