Going through all kinds of terrain on Mount Kilimanjaro, Brazoria County resident Tod Tracy didn’t falter making it to the top of the mountain. 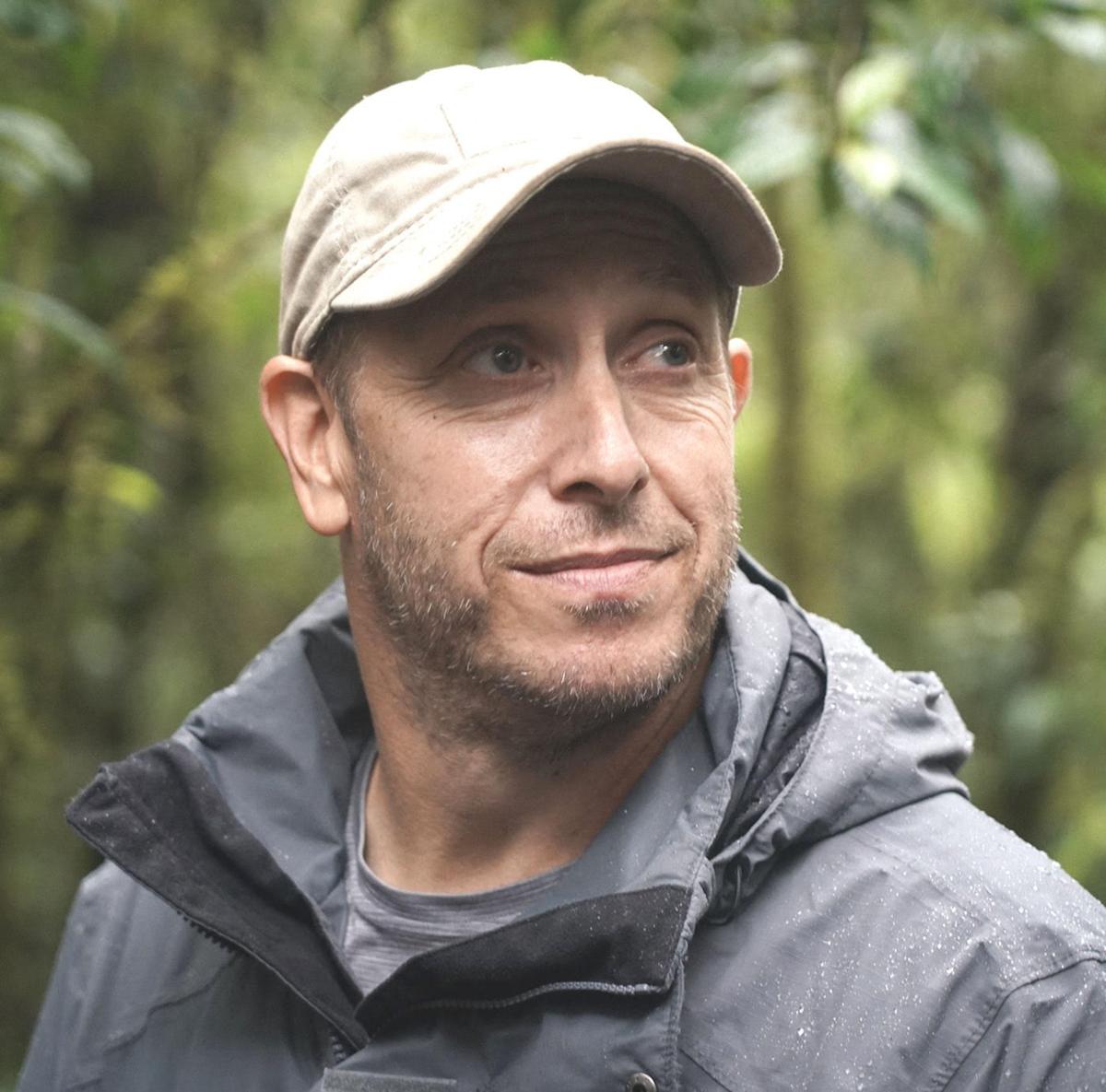 There were some tough moments for Tod Tracy during his climb up to 19,341 feet of Mount Kilimanjaro just a few weeks ago. 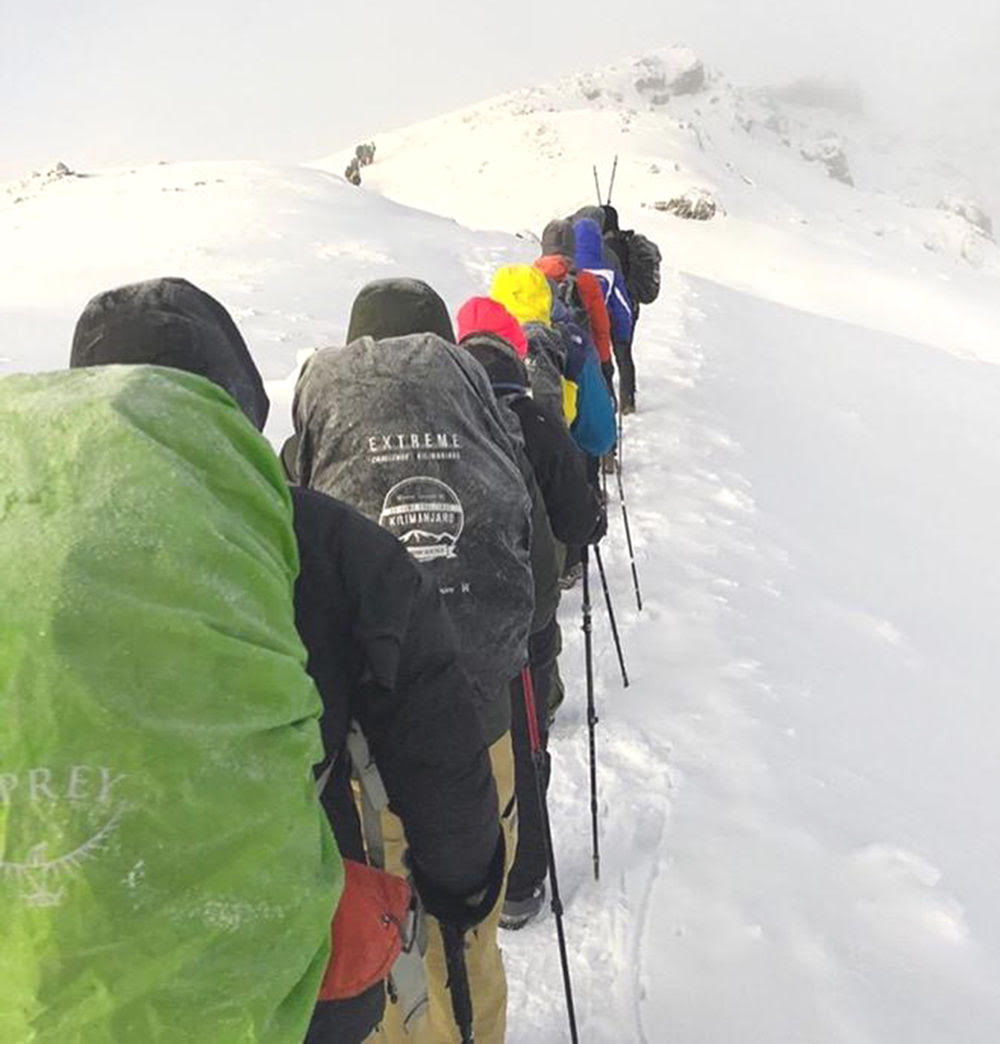 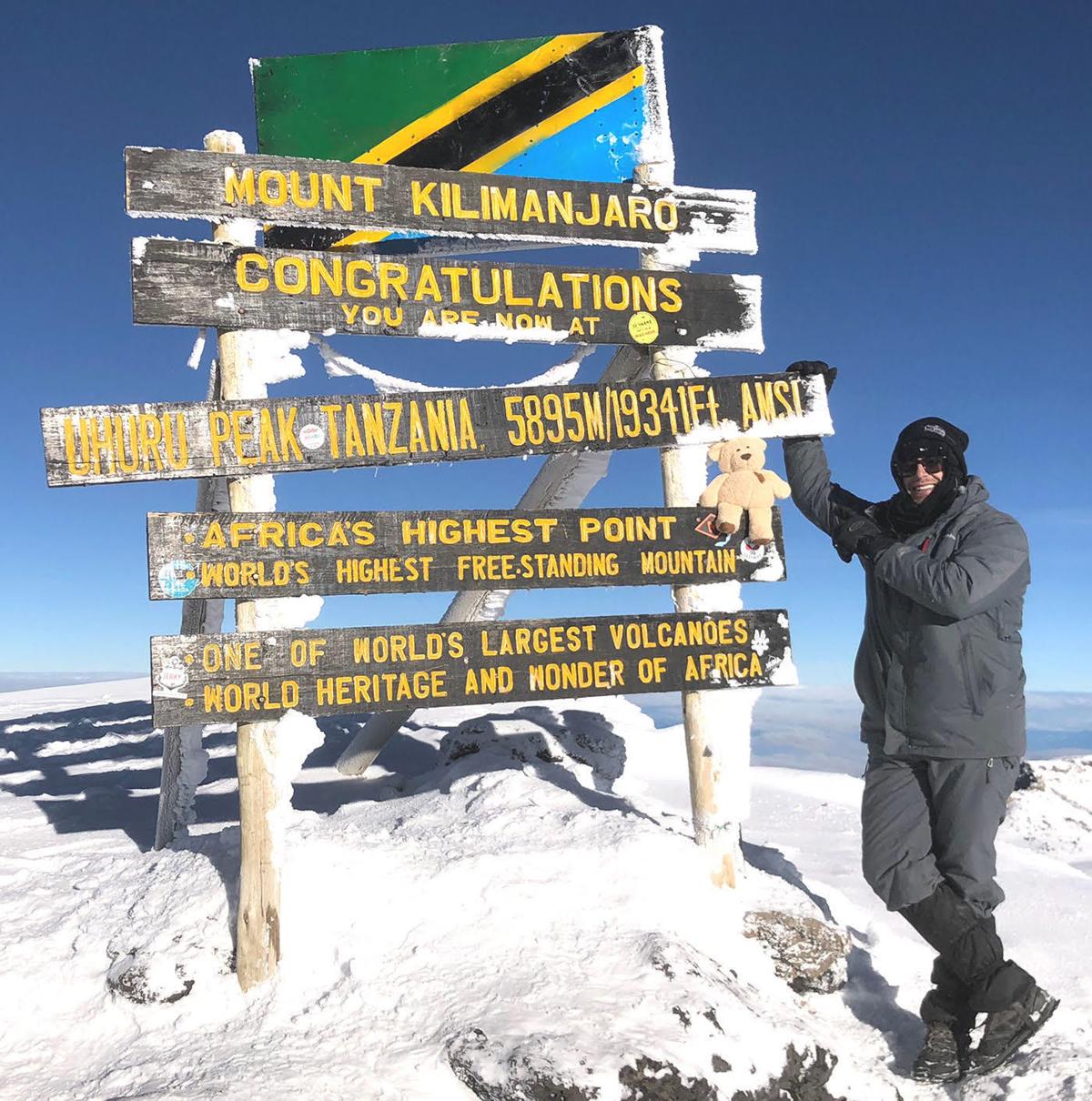 Going through all kinds of terrain on Mount Kilimanjaro, Brazoria County resident Tod Tracy didn’t falter making it to the top of the mountain.

There were some tough moments for Tod Tracy during his climb up to 19,341 feet of Mount Kilimanjaro just a few weeks ago.

A leap of faith placed Tod Tracy in a world of hurt at 19,341 feet above sea level. It was a pain threshold that he eventually got through by understanding his mission.

On Oct. 20, Tracy along with a team of 33 hikers that included 16 from the United States set out to climb Mount Kilimanjaro, a dormant volcano in Tanzania, Africa, the highest mountain in the country and made famous in a short story by Ernest Hemingway. Behind those 33 climbers was a team of 80 or more people who would assist them in getting to the top.

“We signed onto help a company, called Hope For Justice, to raise money and awareness for human trafficking,” Tracy said. “My part was to raise $10,000. Our goal as a group was to raise $270,000 for the organization to build a lighthouse which is an education center.”

Young Living is a company that helps support nonprofit organizations all over the world. One of those organizations is Hope for Justice.

Living in either Lake Jackson or Angleton his entire life, Tracy is a training manager for ICS Construction and on a whim decided this was something he needed to do.

“I’d never done anything for a charity,” Tracy said. “This was a new experience for me, but an opportunity popped up and I told my wife that it would be something that I’d like to do. But I didn’t know about Africa, but once I started digging into the reason, I just felt strong about doing it.”

Going off some praying he did while trying to make up his mind, Tracy agreed to be sponsored by Young Living to take this adventure, which cost $4,400.

Tracy understood the danger in taking up this task.

“I was not a climber and one of the biggest challenges was, I live in Texas where there are no mountains and of course the altitude,” Tracy said. “Acute mountain sickness is a real thing and was part of the seven-day hike.

“But I was not doing this for personal gain but to raise awareness. What allowed me to get to the top and when things got hard or really, really tough — it was the purpose that kept me going. Because if it just would have been for me, I would have quit on Day 3.”

Another thing that also kept him going could have been Joy the bear.

“I left for this adventure on my daughter’s birthday, and she was going to be 9,” Tracy said. “She made me promise to her that I would carry her doll named Joy to the top. So I was the guy with a backpack with a stuffed animal sticking out the back of it.”

“Everyone that went did different things; there was one guy who walked 150 miles with a backpack,” Tracy said. “But I decided to strengthen my legs, strengthen my core and get my weight where it needed to be. I did no cardiovascular training, and did because it was a walk. We didn’t run or anything like that, but at times we climbed cliffs, so we had to go step by step, weaving in and out of rocks.”

With all of this on his shoulders, including the training and the cause, Tracy almost didn’t make it through.

“I had two breaking moments and Day 3 was one of them,” he said. “We were in the rock part of Kilimanjaro and got up to 15,000 feet and by the time we got there, I could not function. I couldn’t think, I could barely walk and my oxygen was down to 66. When I started it was at 97, so I was in critical condition. But this was an acclimation day so when we hiked up to 15,000 feet, we hiked down to 10,000 feet.

“Then on Summit Day, which was Day 5 at 4 a.m., I was struggling with breaths and wasn’t making good decisions and it just got tough for me again. It’s 20 degrees, it’s pitch black, it’s snowing and everything just hurts on your body. And you question why you are there. But what kept me going from that 4 a.m. moment was the people praying for me back home and the reason why I was there.”

On Summit Day, which started at 11 p.m. on Day 5 and ran into Day 6, the hikers did 17 hours of going up or coming down, continuing to acclimate and finally ascending all the way to the top.

Twenty-two of the 33 made it to the top.

“When we get to the top, they will not allow us to stay there, we get a maximum of 25 minutes,” Tracy said. “Because every minute you are there you are going backwards in your life span, because you are not meant to be at that high elevation. Coming back takes us five hours, and then take a nap for two hours and proceed for another six-hour high, so we hiked for 17 hours on the last two days. We started on the fifth day and finished on the sixth day.”

Teah Tracy is Tod’s wife and an independent distributor for the company Young Living.

“I have been with them for seven years,” Teah Tracy said. “The company is out of Utah and just celebrated its 25th anniversary. On this side of the ocean it was a very interesting and humbling experience to know what he was doing and they were doing for that cause. Once he got home, he kept telling us stories and it got better and better.”

Tod Tracy has raised $6,400 out of his $10,000 goal and is still seeking donations at fundraiser.younglivingfoundation.org/bee-the-change.

With some time to reflect, Tod Tracy is happy he took the leap.

“The one thing that I cannot verbally explain to you is how hard it was,” Tod Tracy said. “I can say it was so mentally challenging and exhausting, and I would have never made it had it not been for a reason or cause. Hope for Justice reunited 11,000 kids with their families last year.”