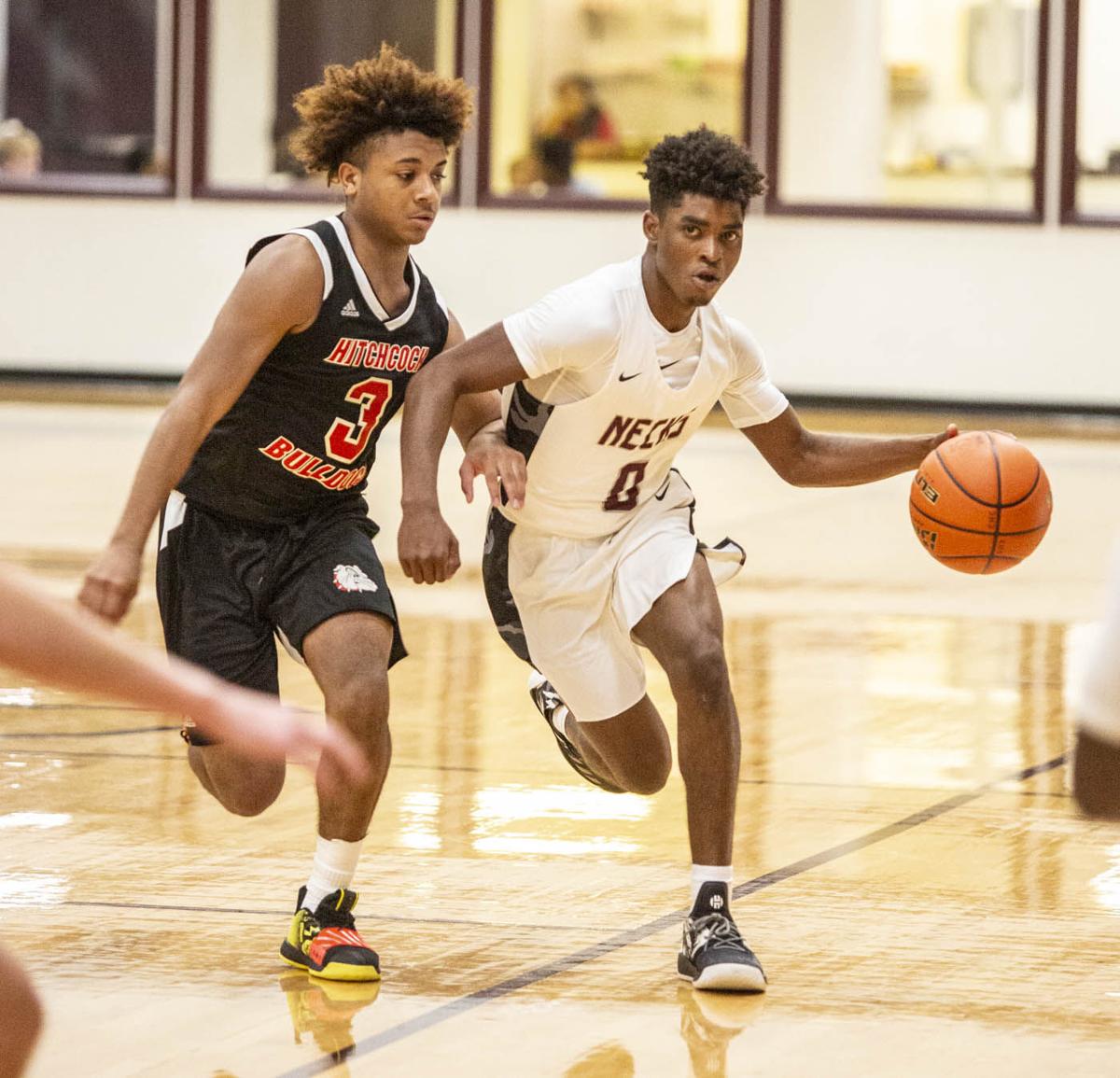 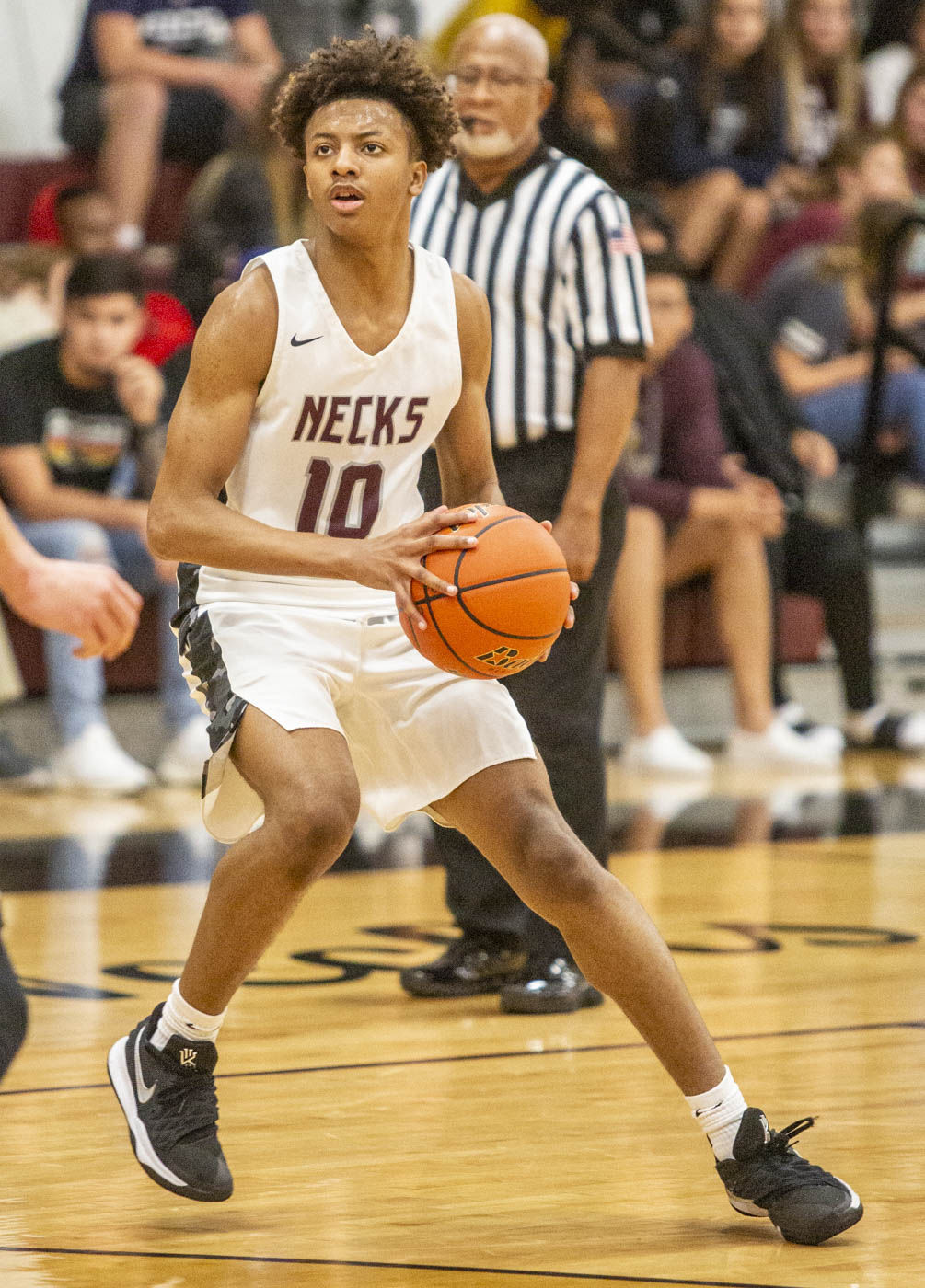 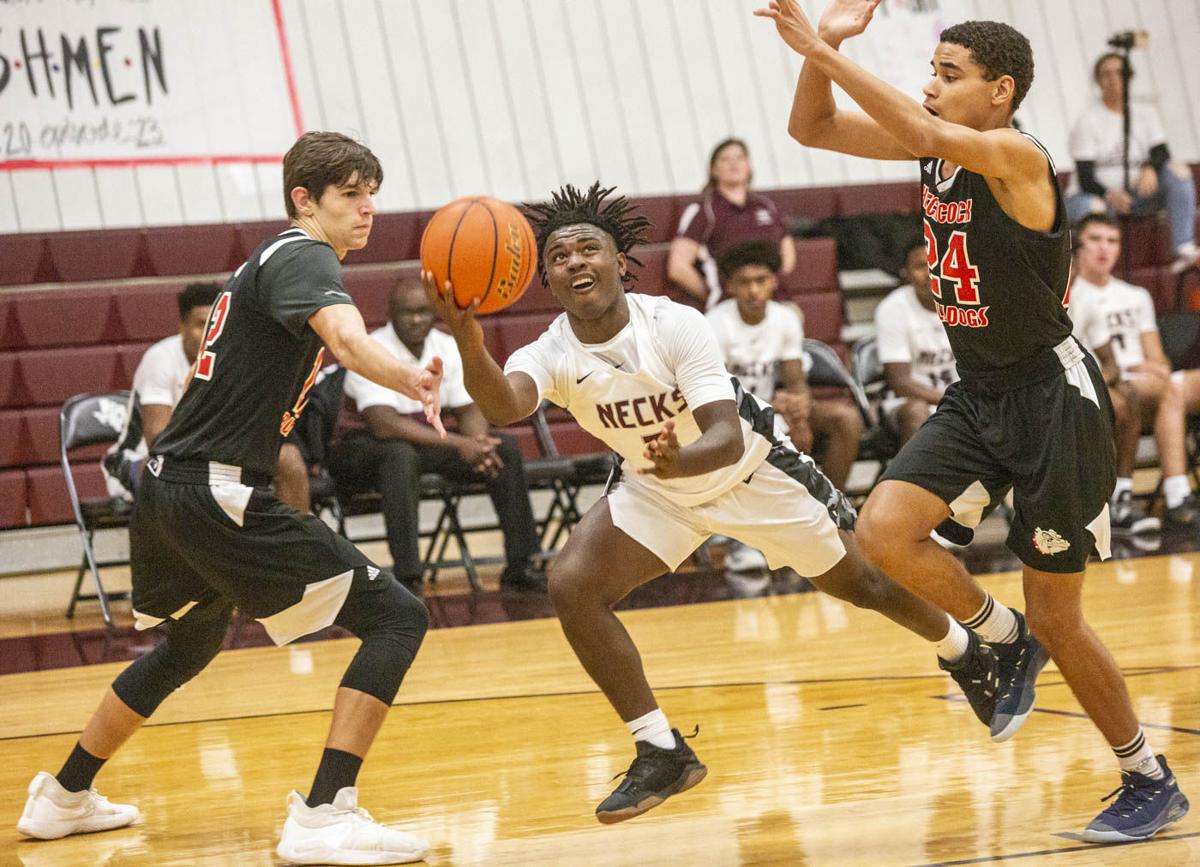 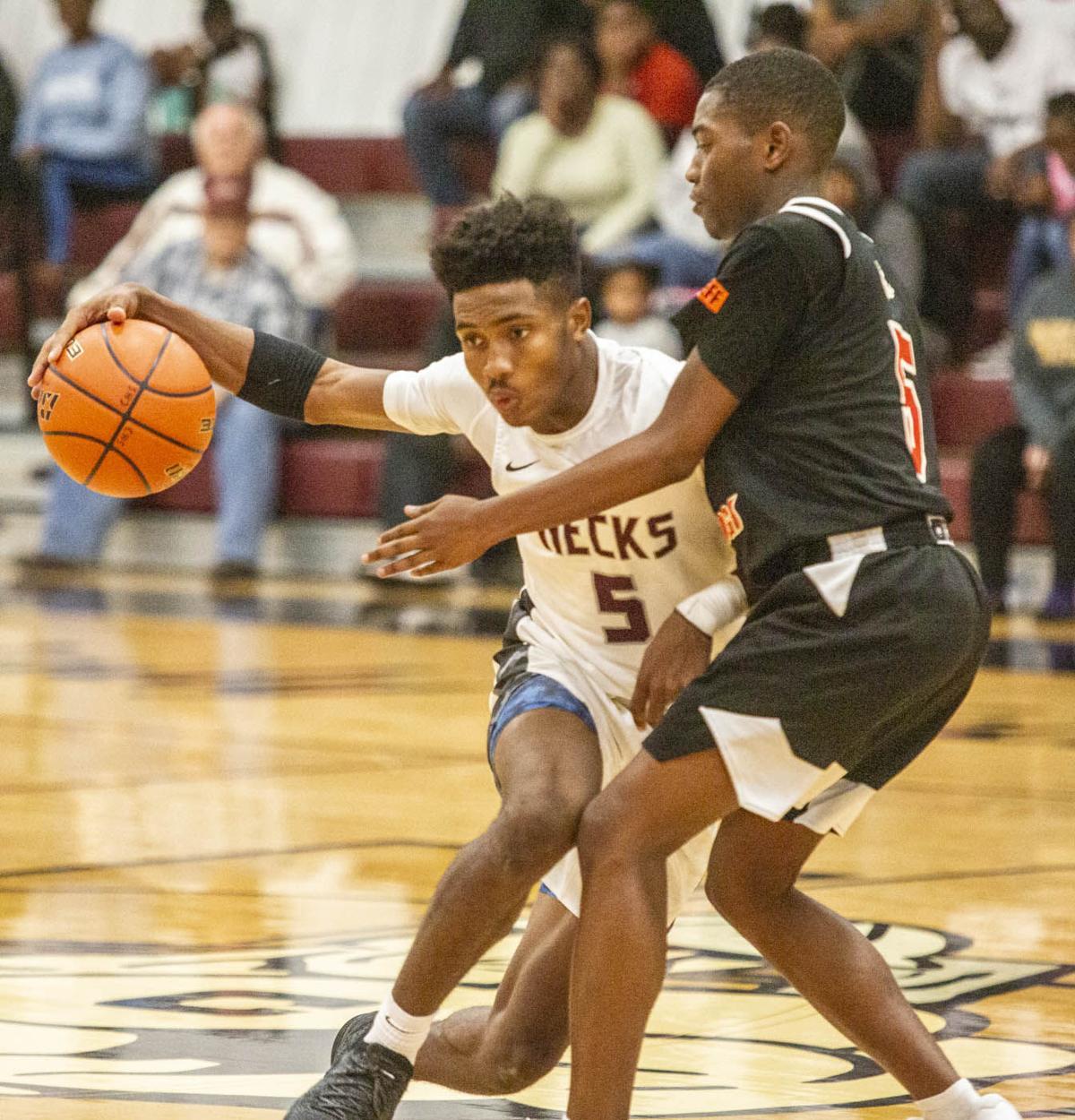 Sultan Abdullah, left, fights to keep the ball away from Hitchcock’s Byron Williams at the Roughnecks’ home game Friday in West Columbia.

Sultan Abdullah, left, fights to keep the ball away from Hitchcock’s Byron Williams at the Roughnecks’ home game Friday in West Columbia.

A furious fourth-quarter comeback had the Columbia faithful on the verge of bedlam with just seconds remaining in regulation, only to have their hearts broken.

Hitchcock guard Christian Dorsey hit a game-winning shot as time expired to give the Bulldogs a 49-47 victory Friday night after they let an 11-point, fourth-quarter lead disappear.

Dorsey’s clutch bucket came after he missed a pair of free throws with 10 seconds left that left the door open for the Roughnecks to tie the contest. Columbia made good on its opportunity as senior guard Cameron Ward drove down the court for a layup to knot the score 47-47 with three seconds left.

Ward also drew a foul but missed the free throw, a common problem for Columbia as it connected on just 10-of-22 foul shots. That final miss wouldn’t have made a difference, however, as the Bulldogs called a timeout when forward Reese Kadlecek rebounded with two seconds left.

Out of the timeout, Hitchcock heaved the ball downcourt, which was tipped by multiple players from both teams before landing in Dorsey’s hands just outside the three-point line. Dorsey took a step inside the arc before he launched his shot, which banked off the backboard and into the net.

The shot became necessary after the Bulldogs, now 2-0 on the young season, pulled away in a close contest then saw the ’Necks stage a comeback.

With Hitchcock leading 34-30 with six minutes remaining, the Roughnecks were whistled for a pair of technicals, awarding two free throws each to Bulldog wings William Hunt and Joeseph Hunt, who hit them all for a 38-30 edge.

On the ensuing possession, the Bulldogs inbounded the ball to guard Jayce Snyder, who was fouled on his layup and converted the three-point play to push the lead to 41-30.

The Roughnecks put together a 12-4 run to cut the deficit 45-42 with 1:33 left in the game, bringing a timeout by Hitchcock. William Hunt hit a bucket for the Bulldogs, but ‘Neck guard Jalen Austin answered and Columbia got the ball back on a defensive stop.

Ward was fouled going for a layup with 22 seconds left and split a pair at the free-throw line, chipping the score to 47-45, setting up the frenetic final seconds.

“Hitchcock is a good team and they’re going to make some noise this season. I was impressed with what they did offensively and defensively and they made it difficult for us,” Columbia head basketball coach Henry Valladares said. “We have some stuff to work on, we’ve only had a handful of practices because we had a successful football season, but they killed us on the boards and in the turnover battle, and that’s things we can control.”

Hitting more free throws also would have made a difference, he said.

“10-22 is below 50 percent and we try to be around 75; that’s usually the mark for good free-throw-shooting teams, and we weren’t there,” Valladares said. “Those are the moments we want to prepare us for down the road in the season. I have complete faith in my team and the whole staff and we have to put it all together.”

Ward led Columbia with 19 points and four rebounds after being held scoreless in the first half. Dorsey had 13 points to go along with six rebounds and Hunt added 13 points and two rebounds to lead Hitchcock.

Columbia did well in transition, but had most of their turnovers and bad shot selections running their half-court offense. They shot 17-41 from the field, 41 percent.