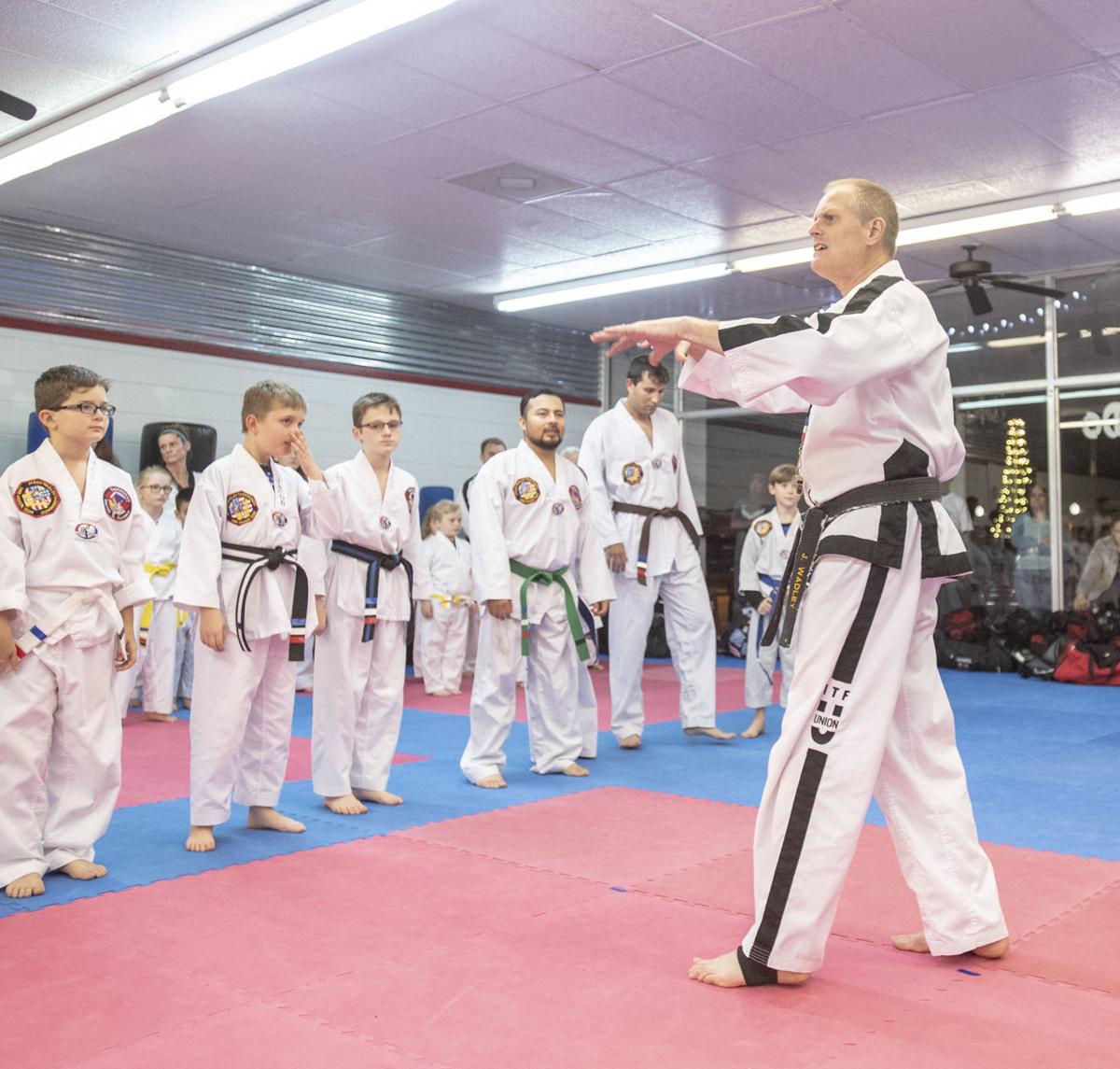 A taekwondo student since he was 10 years old, Jason Wadley from Jason Wadley Taekwondo gives instruction to his students on Thursday in Lake Jackson. 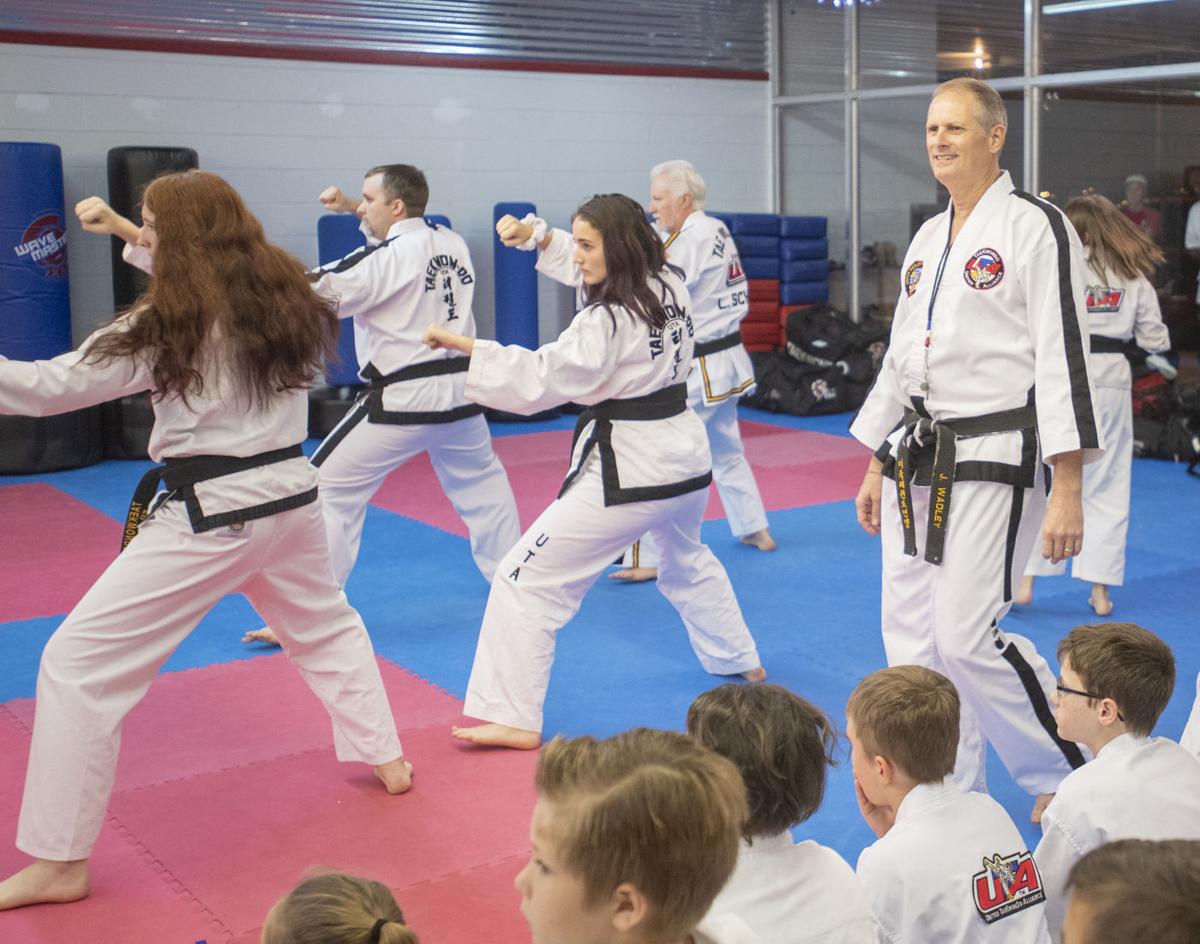 Grand Master Jason Wadley instructs his students Thursday night during a taekwondo class at his school, Jason Wadley Taekwondo, which opened in 1996 in Lake Jackson. Wadley is a ninth degree black belt in taekwondo and was inducted into the sports Hall of Fame. 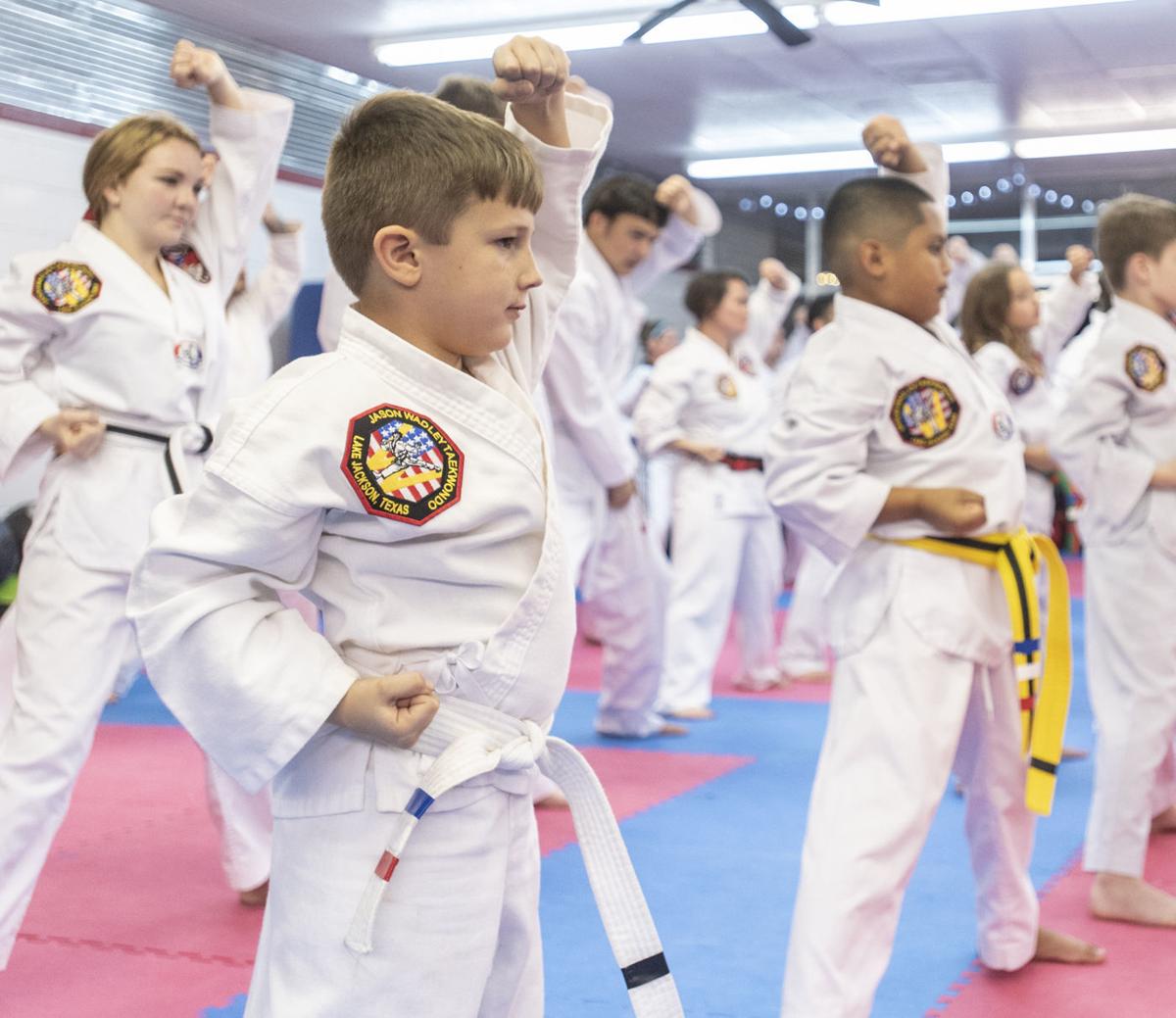 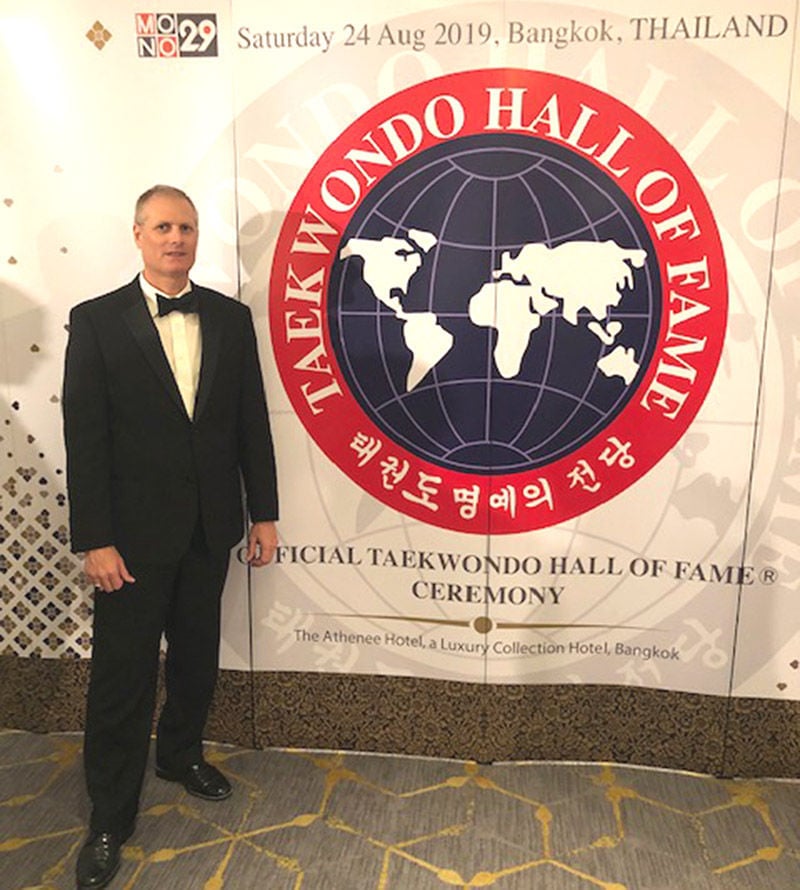 Lake Jackson’s Jason Wadley stands next to the Taekwondo Hall of Fame logo on Aug. 24 after being inducted.

A taekwondo student since he was 10 years old, Jason Wadley from Jason Wadley Taekwondo gives instruction to his students on Thursday in Lake Jackson.

Grand Master Jason Wadley instructs his students Thursday night during a taekwondo class at his school, Jason Wadley Taekwondo, which opened in 1996 in Lake Jackson. Wadley is a ninth degree black belt in taekwondo and was inducted into the sports Hall of Fame.

Lake Jackson’s Jason Wadley stands next to the Taekwondo Hall of Fame logo on Aug. 24 after being inducted.

With more than 40 years invested in the sport of taekwondo, Lake Jackson’s Jason Wadley was bestowed with his highest honor after getting inducted into the Taekwondo Hall of Fame in Thailand.

Starting practice at age 10, Wadley has certainly spent his time studying, going from student to teacher to innovator of the sport.

“This is the top of the top to be recognized for contributing to the art of taekwondo,” Wadley said. “I was nominated for it after serving a role as a president to kind of a large taekwondo organization as well as some international organizations as well. So I’ve kind of have a bit of influence on the growth of taekwondo, basically throughout the whole world. So because of those contributions, I was recognized.”

Somewhat taken aback after being notified of his honor, Wadley understands what he’s done for the sport.

“That wasn’t my goal when I first started out in this, and I surely felt like, why are they picking me?” he said. “But obviously somebody recognized the contributions, but it was surprising.”

With his own school, Jason Wadley’s Taekwondo in Lake Jackson, Wadley continues to spread the word to his students on a daily basis, from 1986 to the present.

“I’ve been in it my whole life, and I will continue in it,” he said. “When most hear about taekwondo, they think it is about fighting or self-defense, but one has to become a complete person, which is the whole goal in life. From relationships to finances to mental and physical being, it makes one more of a complete person if they study the sport. Some see it only as a sport, but I have students who are all over the world, and I travel to continue to teach my students.”

A special occasion in many ways, it was also quite unique to be inducted into the Hall of Fame on Aug. 24 in Thailand.

“The trip itself was interesting because I was taking some people from the United States on a training tour with taekwondo through Korea,” Wadley said. “I had never been to Thailand, so it was a pretty amazing trip. One of the unique things about it was that one of my old teachers was there, and he was part of the group who was handing out the awards, and he was the one who gave me my induction award.”

Just getting inducted was a big honor for Wadley, but whom he received the actual award from was even bigger for him.

“The highlight of the evening for me was receiving this award from my teacher, who is considered one of the original founders of taekwondo,” he said. “He actually traveled around spreading the word about it before anyone knew anything about it. Him and a demonstration team traveled the world and did open challenges to anybody that wanted to try it out. He’s traveled about 172 countries just spreading the word.”

August must have been Wadley’s month, because being inducted into the Taekwondo Hall of Fame, he was also recognized for another honor.

“In the same month I was recognized in the Who’s Who of Martial Arts, so it was interesting that both of these things for the work that I’ve done out there did not go unnoticed from the industry leaders,” he said.

Two years ago, Wadley was also promoted to the ninth degree of taekwondo, which is the highest level anyone can reach in the sport.

Through it all, he remains humble and eager to spread the word about the sport.

“I guess what keeps me humble is getting beat up by 7-year-olds,” Wadley said. “I am still doing what I love but in a different level, and with rank comes responsibility. Someone helped me along the way and gave to me, and I just could not keep taking from it, so I had to give back. That keeps me as a balanced person.”