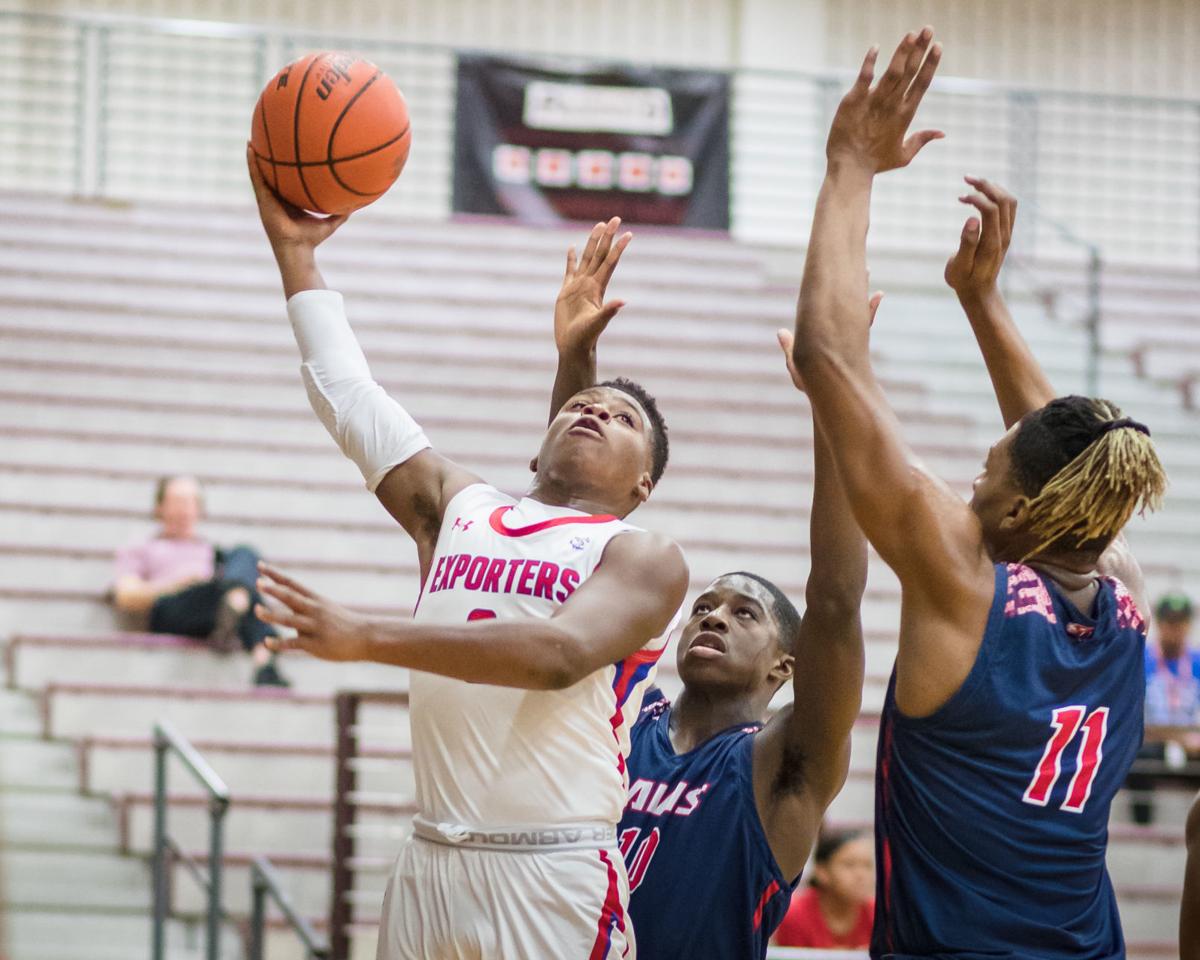 Brazosport’s Paul Woodard, left, takes a hook shot from the baseline with Benjamin Davis’ Darius Mackey (10) and Ju’Quan Irvin (11) defending in Friday’s game during the Pearland Classic at Pearland High School in Pearland. 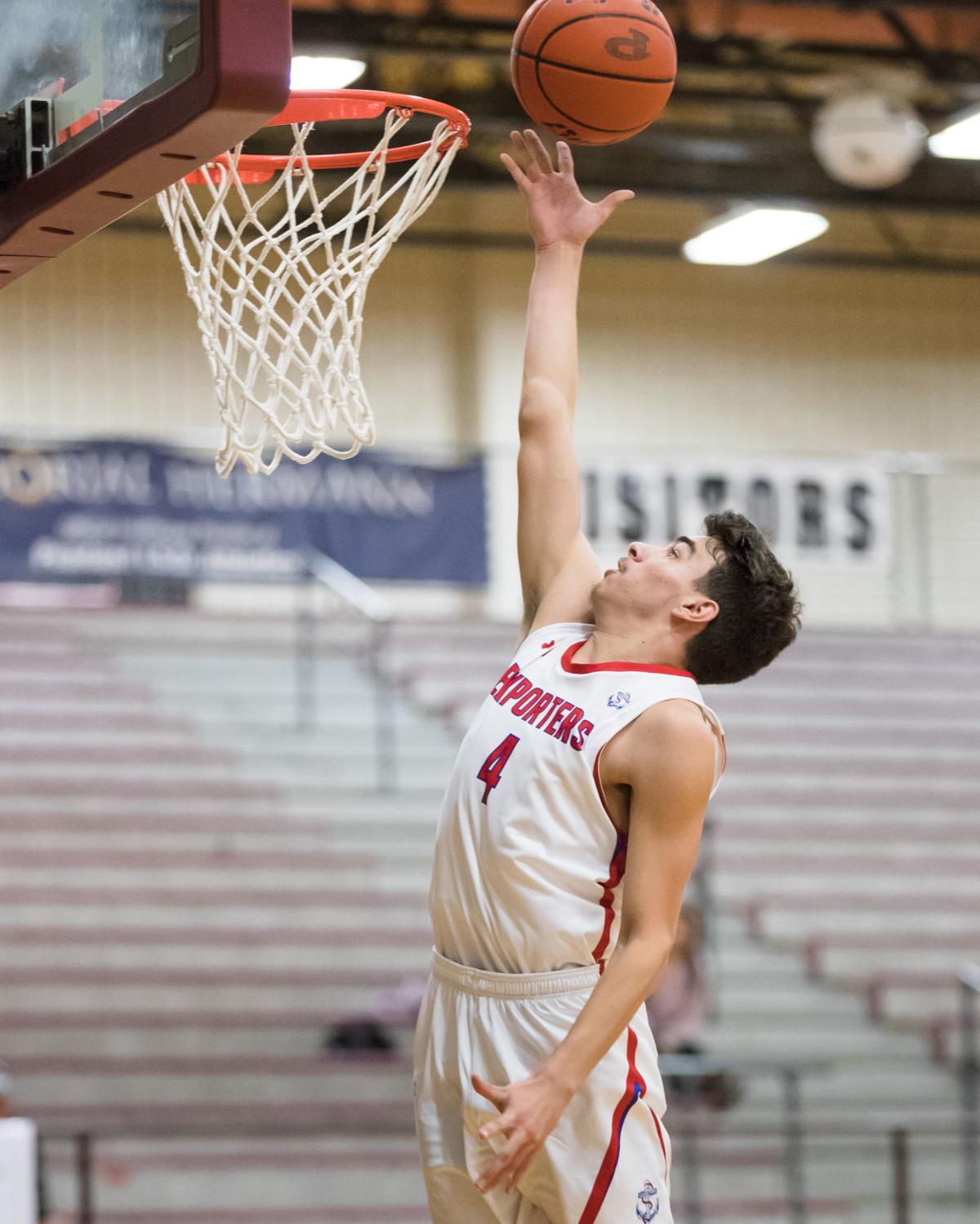 Elliott Cundieff (4) of Brazosport soars to the rim for a layup during Friday’s game against Benjamin Davis in the Pearland Classic at Pearland High School in Pearland. 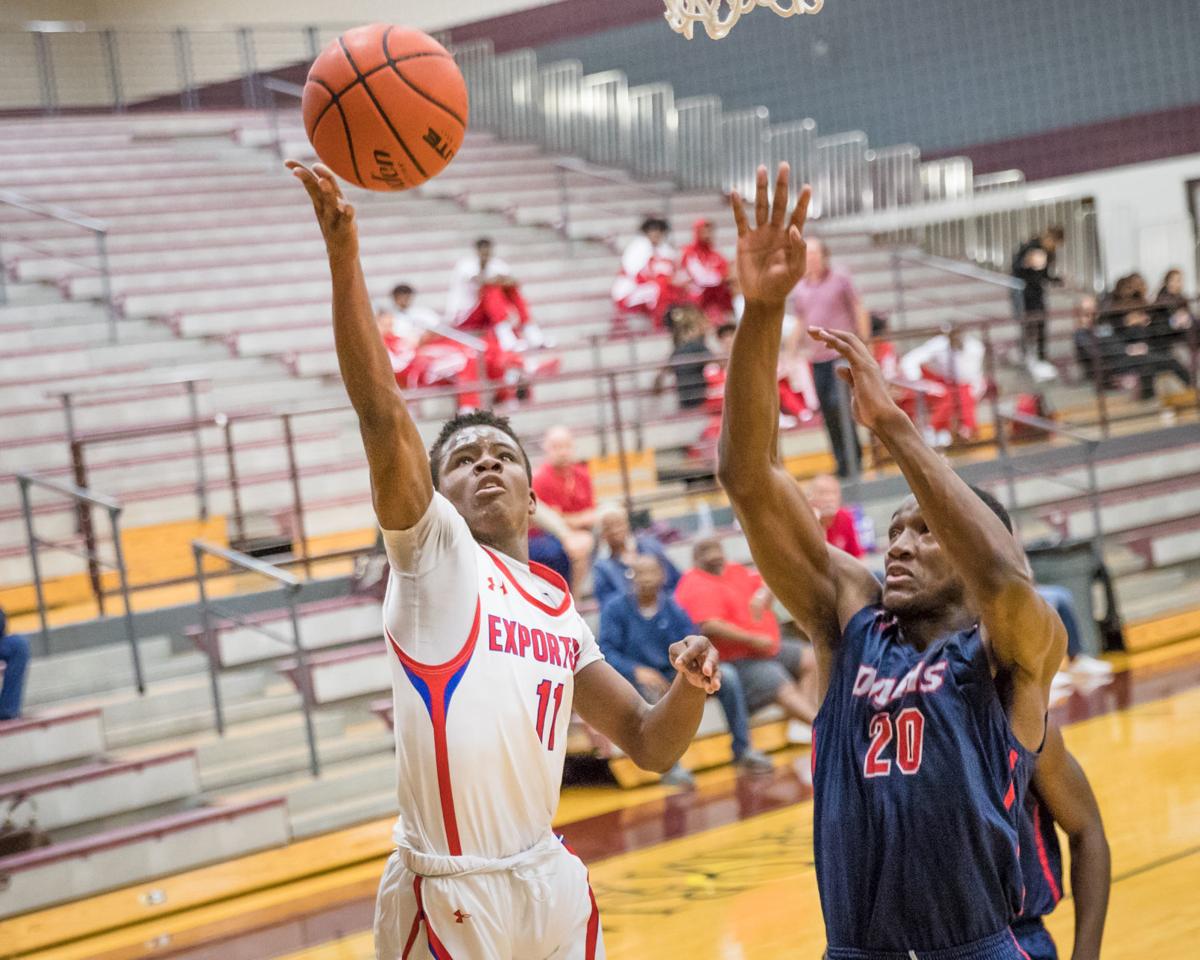 Brazosport’s Paul Woodard, left, takes a hook shot from the baseline with Benjamin Davis’ Darius Mackey (10) and Ju’Quan Irvin (11) defending in Friday’s game during the Pearland Classic at Pearland High School in Pearland.

Elliott Cundieff (4) of Brazosport soars to the rim for a layup during Friday’s game against Benjamin Davis in the Pearland Classic at Pearland High School in Pearland.

A forgettable second quarter sealed Brazosport’s fate Friday as it faced off against a powerhouse class 6A team.

The Benjamin Davis Falcons defeated the Exporters, 70-50, in the Pearland Classic at Pearland High School.

“We played well other than that second quarter,” Brazosport head coach Travis Pittman said. “We just gave up too many turnovers and missed out on assignments. Our team is based around our defense, being able to cause turnovers and make shots out in transition.”

Exporter guard Ray Bell hit a 3-pointer with a minute left to lift his team to a 12-10 lead at the end of the first quarter. But that was the last lead the Ships had, as turnovers and missed shots plagued them the entire second quarter.

The Ships turned the ball over nine times in the quarter and were out-rebounded 10-3. Falcon guard Ja’Quan Lewis led his team in the quarter with seven points while forward Desmond Davis added four points and three rebounds as the Falcons outscored Brazosport 25-4 for a 35-16 halftime lead.

The Ships couldn’t generate much offense, whether trying to hit shots on the perimeter, convert contested layups or draw a foul to get to the free-throw line.

The Ships came out with intensity in the third quarter, forcing six turnovers with their pressure defense.

The highlight of the quarter for the Ships was Bell’s 3-point play that trimmed the margin to 46-27. Forcing a turnover created a quick transition layup for Bell at the other end. He not only made the layup but drew a foul and converted the free throw.

That exchange brought enough momentum for the Exporters to cut the deficit to 46-33 with three minutes left in the quarter.

Another key contributor for Brazosport was forward Elliot Cundieff, who forced multiple turnovers and drew numerous fouls. Cundieff had five points in the quarter, but made only 3-of-7 from the foul line. The Falcons led 50-34 at the end of the third.

The fourth quarter was as back-and-forth as can be, with the pace of the game speeding up that resembled a pickup game. Davis excited the crowd with two explosive dunks in the quarter to put a signature on the Falcons’ win.

“They are a powerhouse 6A school; they’re a good team and I’m happy with the way our team played,” Pittman said. “Our biggest guy was like one of their smaller guys, and we really played well for the most part.”