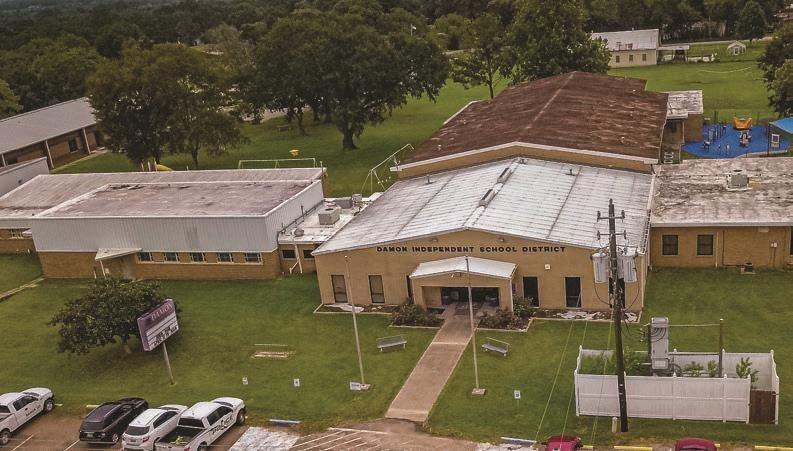 Damon ISD offers kindergarten through eighth-grade at its campus, which is a centerpiece in the unincorporated community. 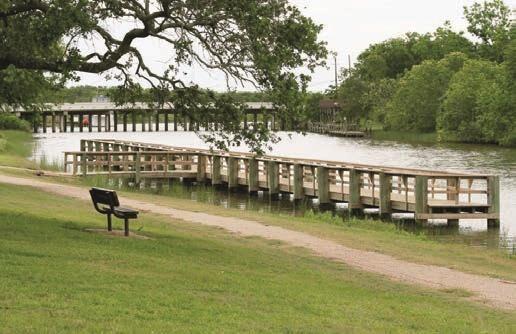 Oyster Creek Municipal Park provides a relaxing place to spend a day or do some fishing. 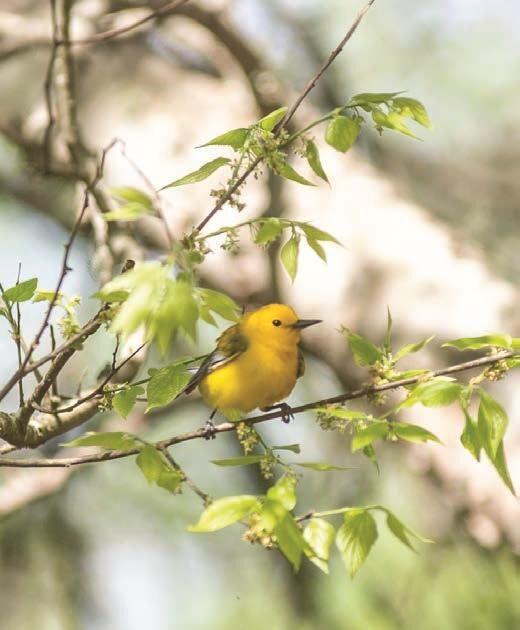 A female hooded warbler sits on a branch at the Quintana Neotropical Bird Sanctuary. Birders have no problem adding species to their life lists when they visit the coastal community of Quintana.

Damon ISD offers kindergarten through eighth-grade at its campus, which is a centerpiece in the unincorporated community.

Oyster Creek Municipal Park provides a relaxing place to spend a day or do some fishing.

A female hooded warbler sits on a branch at the Quintana Neotropical Bird Sanctuary. Birders have no problem adding species to their life lists when they visit the coastal community of Quintana.

Bailey's Prairie is named for James Britton "Brit" Bailey, who settled there with his family in 1818. When Stephen F. Austin arrived with his land grants from Mexico and 300 families, Bailey would not surrender his land and eventually received a league of land on the east bank of the Brazos River. His life is commemorated on a historic marker at the Munson Cemetery on Highway 35 in the village.

It is said Bailey haunts Highway 35, appearing as a bouncing white ball of light floating about 4 to 6 feet off the ground. Many claim to have seen this phenomenon known as "Bailey's Light," but no one knows its cause. The light has been known to "chase" vehicles on the highway.

Located 6 miles northwest of Angleton off FM 521, the village of Bonney was established in 1873 by the International-Great Northern Railroad and named for a conductor on the Columbia Tap Railroad.

Today, Bonney retains its small-town feel and rents out a community center and pavilion for family gatherings.

Nestled between the south Harris County line and north of Pearland is Brookside Village, an incorporated residential community on Clear Creek next to Highway 35. The village was incorporated in 1959.

The farming community sits off Highway 36 and FM 1462. Named for Samuel Damon, who moved to the area in 1831, it originally was known as Damon Mound or Damon's Mound. It has its own school district that serves up to eighth grade. Damon reported a population of 552 in 2010, the most recent figure available.

Danciger is near the Matagorda County line on FM 1301. It was established in 1933 when Danciger Oil and Refining Co. opened the Pledger Dome gas field. It had a post office by 1934, adding to businesses and reporting a population of 150 in 1939. In 2000, the population was 357, but there was no census data available for 2010.

The town is about 9 miles west of Angleton. The town consists of mainly residential areas built around five small lakes; all situated about 2 miles east of the Brazos River. It was incorporated in 1981. In 2017, the estimated population was 1,208.

Liverpool sits along CR 192 just south of Alvin. It began as a trading post around 1827, was settled in 1834 and officially founded in 1837. The community began as a Chocolate Bayou shipping point for wool, hides and produce from the Stephen F. Austin colony.

Liverpool was named for the English port by a man known as Commodore Nelson. Its estimated population was 551 in 2019.

Formerly known as Chance's Prairie, the town is named after the land grant made to Joseph H. Polley and Samuel Chance in 1824. Old Ocean is at Highwy 35 and FM 524.

James "Jim" Abercrombie discovered oil nearby in 1934, and a government oil refinery was constructed to make high-octane gas. The oilfield was named Old Ocean, which became the community's name by 1936.

Settled by Sam Hudgins and other cattlemen, Oyster Creek later developed into cotton and sugar plantations.

Growth of the community between 1890 and 1894 is credited to two brothers known only by the surname Horn. The brothers formed a promotion company, offering a bonus lot in Velasco with the purchase of five prairie lots in Oyster Creek.

The city is a quiet, small community with parks, but is known for its strong fishing. Oyster Creek winds through the area, providing good access to bays.

The island of Quintana has been a community since 1532. Believed to have been named by Mexican General Andres Quintana, it was described in the later 1830s as a place of "shanties and a mixed population of Yankees, Mexicans and Indians." Other accounts mention a hotel, pavilion, pool and dance halls. In antebellum Texas, Quintana was a favorite vacation spot for plantation families.

Varied industries have come and gone, including a cattle hide and tallow operation, a pickled beef factory and the only shipyard west of New Orleans before the Civil War. The hurricane of 1900 virtually wiped the Brazoria County coastline clean, and most families in Quintana moved inland.

Today, Quintana is a popular destination for beachgoers and bird watchers, and is home to Freeport LNG, which is being transformed into a multibillion-dollar liquefied natural gas export facility.