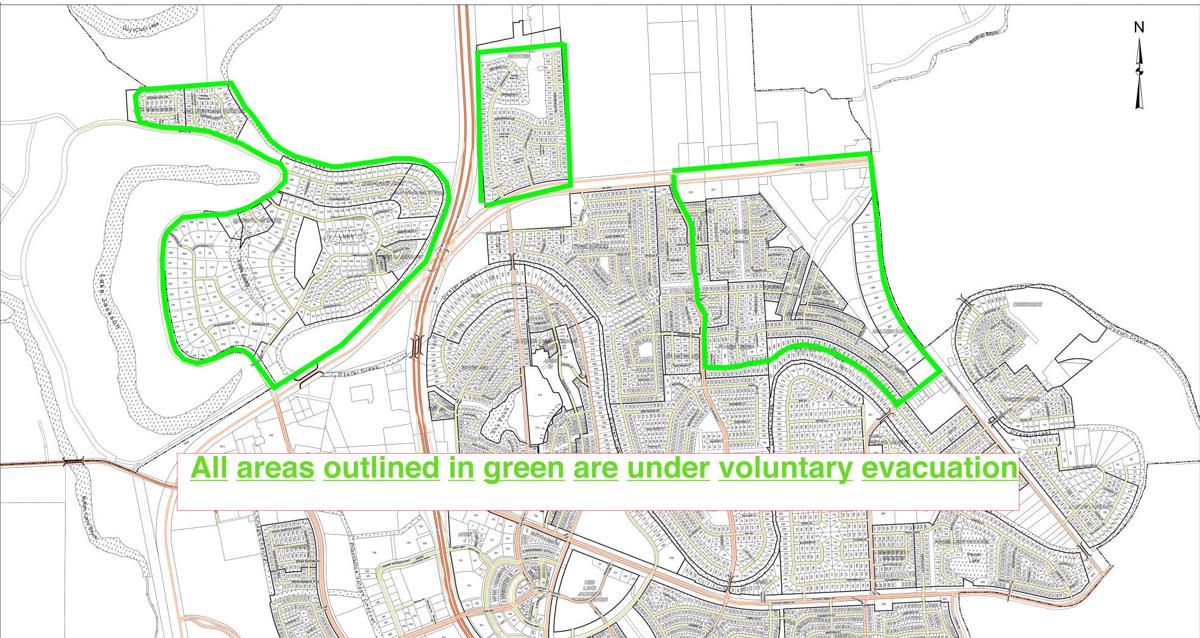 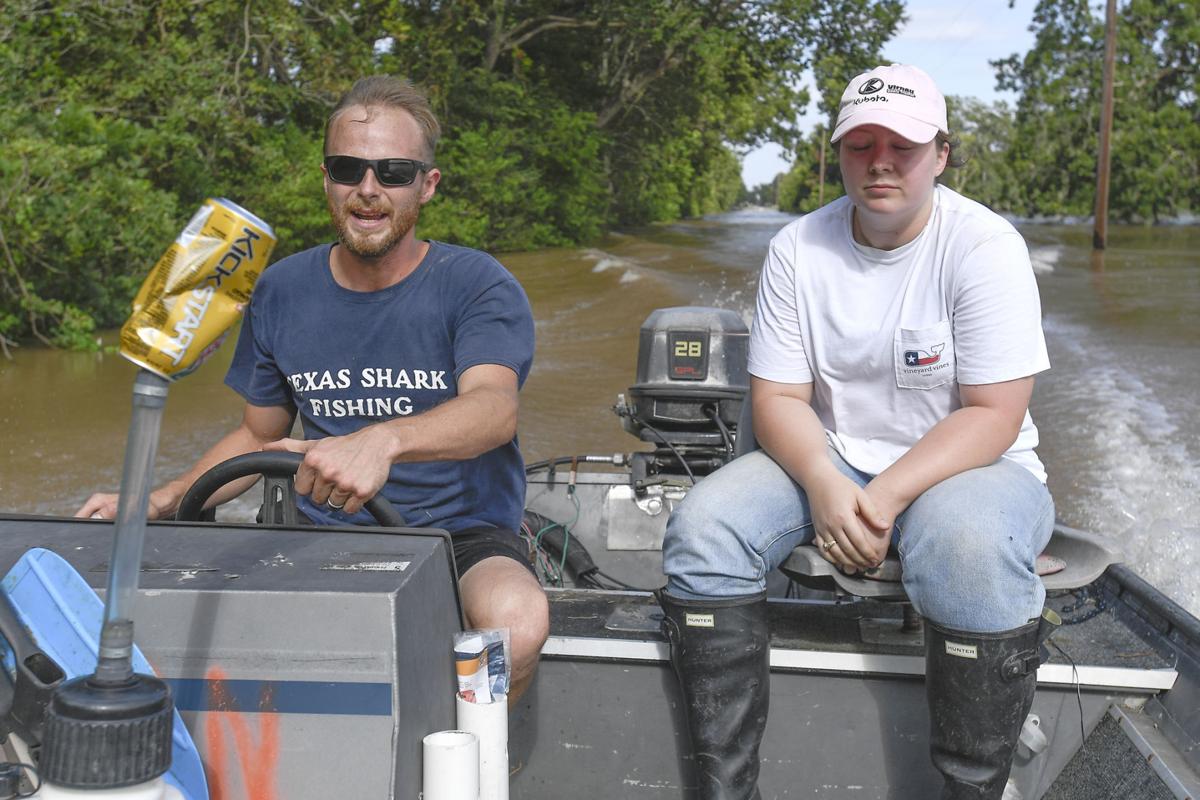 Jimmy Mann, left, and Audrey McElya ride in a boat on CR 31 in Angleton to pick up Mann's father Wednesday.

Jimmy Mann, left, and Audrey McElya ride in a boat on CR 31 in Angleton to pick up Mann's father Wednesday.

This file will be routinely updated with the latest information on the effects from Tropical Storm Harvey. Remember our full website is free throughout the crisis, including the daily e-edition for residents forced to evacuate.

Many of the roads have been impassable for some time because of flooding, and the area's sewer system now is over capacity, according to the city.

Angleton ISD students will return to school Wednesday on their normal schedule, the district announced this afternoon. The first day back for staff and teachers will be 8 a.m. to 3 p.m. Tuesday.

To help families affected by flooding, lunch will be free for all students and staff through the end of September, the district announced.

Angleton ISD Transportation Department officials will make a decision about bus routes and pick-ups/drop-offs Monday based on road conditions and closures, and we will post the information on the district website and Facebook page.

Rumors went wild Thursday about a new curfew covering all of Brazoria County. County Judge Matt Sebesta said word of mouth exaggerated some features of the curfew already in place, and false information spread to some Emergency Operations Center staff.

“It's not a countywide curfew; it's the same curfew that we had yesterday,” he said Thursday afternoon. “In mandatory and voluntary evacuation areas, it's a curfew from dusk until dawn.”

The curfew protects citizens and first responders by keeping people safely off the roads during the night. The measure also can discourage looters, who will be more conspicuous moving alone on dark streets.

Sebesta said the county curfew will not clash with any city curfews.

“The cities' (curfews) are their own, whatever they have, that's up to them,” he said.

Angleton City Manager Scott Albert debunked another rumor, saying his city has not instituted a curfew for within city limits.

Texas Gov. Greg Abbott is suspending vehicle registration rules for Harvey victims. With this suspension, Texans who reside in affected counties can avoid penalties for failure to timely register a vehicle, obtain a vehicle inspection or transfer title to a vehicle, according to the governor's office.

The suspension is set to last for 45 days. For additional information Texas should contact the Texas Department of Motor Vehicles at 888-368-4689.

Richwood is calling for a voluntary evacuation for people living north of Moore Street on Oyster Creek Drive, Jasmine Street and Hollyhock Street. This is in addition to the voluntary evacuation in Audubon Woods 1, Brazos Crossing, Oakwood Shores and streets north of South Yaupon.2:30 p.m. update

Water levels already are higher than they were during the spring 2016 floods, and major flood stage will not end until at least Monday.

The Facts phone system has gone down. If you need to reach us, please do so by email, which remains functional.

To address potential confusion, Lake Jackson has released a map showing the areas under the voluntary evacuation order. It is attached to this file. Residents also can call 979-415-2788 if they need more information.

Time to knock down another room: Neither Highway 288 nor 288-B are being shut down. We are posting a list of current state and county closures.

The City of Lake Jackson is working on maps showing the new voluntary evacuation areas in the norther part of the city. To simplify, if you live west of Highway 288 and north of FM 2004, chances are you should be planning to leave or be stuck inside your home for an extended period.

On the northeast side of town, the drainage flood gate at FM 2004 near Regal Storage was struggling to keep Bastrop Bayou flood waters from coming into the city through the Brazos Canal. This caused minor street flooding in the Sugar Cane Trace and Crepe Myrtle area. City crews are working to seal this structure and prevent further backflow into the city.

Lake Jackson has added six subdivision to its call for voluntary evacuations because of expected street flooding that could prevent people from getting into and out of the neighborhoods. Low-lying homes could get water in them.

Neighbrohoods in the evacuation areas include all Timbercreek subdivisions, Heritage Oaks, Sugar Plantation, The Plantation, River Oaks and Jackson Oaks.

The city also is calling for a voluntary evacuation of the area behind FM 2004 on the north, North Yaupon on the west, Old Angleton Road on the east and Southern Oaks on the south.

Residents can evacuate to any safe location. The core of the city is out of the flooding area and residents can stay with friends or family who live outside the evacuation areas. Nearby shelters include Clute Intermediate School and Angleton ISD.

Rumors that the Highway 35 bridge over the San Bernard River are totally false, Commissioner David Linder said. All bridges are performing as expected, he said.

Several more roads as well as the Audubon Woods 1 subdivision have been closed by the city of Richwood because of flooding. Areas of the subdivision are impassable even by utility vehicles, the city reports.

The water is clear, meaning it is rainwater and not from the creek or bayous.

Sweeny is offering people who need transportation to go to a shelter. Residents can call the city emergency operations center at 979-548-4541.

City emergency officials will be leaving the city Friday and set up operations elsewhere, meaning there will be no services available.