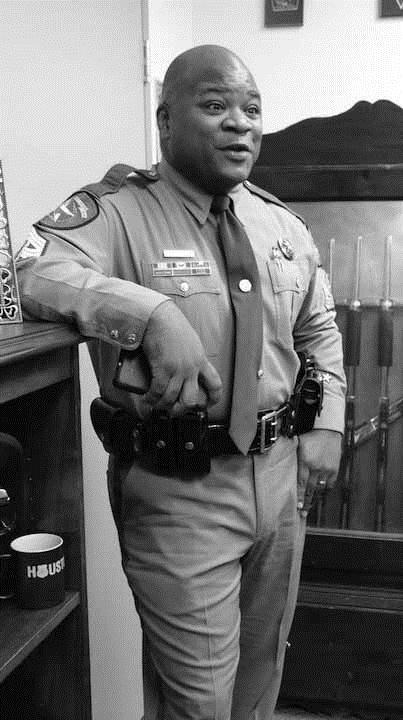 Texas Department of Public Safety Sgt. Stephen Woodard knew he wanted to be a state trooper from the time he was very young. He has made it his mission to inspire the community and make safety improvements throughout the eight Texas counties he oversees. 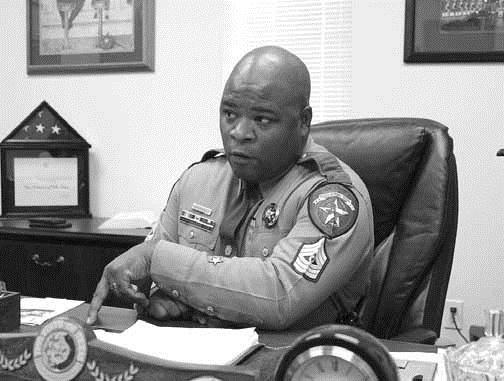 Sgt. Stephen Woodard discusses his work at the Texas Department of Public Safety, where he's been a state trooper and a media spokesman for more than a decade.

Texas Department of Public Safety Sgt. Stephen Woodard knew he wanted to be a state trooper from the time he was very young. He has made it his mission to inspire the community and make safety improvements throughout the eight Texas counties he oversees.

Sgt. Stephen Woodard discusses his work at the Texas Department of Public Safety, where he's been a state trooper and a media spokesman for more than a decade.

Sgt. Stephen Woodard says the best way to connect with someone is through a smile. Anyone who meets him can instantly see he lives out his philosophy.

The state trooper's warm demeanor and bright, tidy office at the Texas Department of Public Safety office in Rosenberg are reflective of his intrinsic values instilled in him by his parents.

"I was raised by a good woman and a good man, and they taught me integrity and respect," Woodard said.

Integrity and respect, for himself and his community, are principles he strives to live by daily, he said.

Growing up in Houston, Woodard knew from a young age he wanted to be a state trooper.

"I remember my dad bringing me to a driver's license office and I saw a trooper — a tall African-American gentleman, wearing a tie just like me, and I told my dad, 'Hey, that's what I want to be when I grow up.' So, this is a childhood dream," Woodard said. "But how cool is it to do a dream that also helps people?"

Before pursuing his dream to become a state trooper in Texas, Woodard joined the military to first serve his country.

As a member of the military police for several years, Woodard had the opportunity to travel the world, including two years stationed in the Middle Eastern country of Bahrain, which he called his favorite place to be posted.

But while traveling and serving his country, Woodard's ambition to become a state trooper stuck in his mind.

When his military career wound down after a decade of service, Woodard entered the six-month DPS Academy, where he went through challenging physical and mental training, he said.

After graduating, he officially became a state trooper in 2008.

"From the day that I entered the academy doors to the time I graduated, it was all worth it," Woodard said. "I learned to be a trooper in Brazoria County. This is like my extra cup of coffee."

Texas DPS monitors all sorts of activities. Woodard said the job is very rewarding, though it does have its hardships.

"There was never a doubt, even going to my first fatality to arresting my first suspect, there's never been a doubt ... because I remember why I'm doing this," Woodard said.

During an incident on Highway 288, Woodard said he had to conduct CPR on a young man. He later received a letter from the young man's doctor letting him know if it hadn't been for Woodard's efforts, that young man would have died.

"That was a rewarding moment," Woodard said.

Perhaps one of the most difficult aspects of being a state trooper, Woodard said, is notifying families when a relative dies in a vehicle crash.

"Someone has to notify those families that their loved one isn't coming home. That's hard," he said. "But it's rewarding in a way. As professional as we are, we go to these homes with our hats off and open arms and we ask if there's anything we can do. It becomes very personal."

When these incidents occur, Woodard said he's reminded just how important his job is.

As part of his mission as a state trooper, Woodard strives to provide the community with outreach by speaking at schools, churches and other functions about safety programs and activeshooter preparedness.

Additionally, Woodard has three children who are his driving force for everything he does, he said.

"They are the light of my life," Woodard said.

Another light in his life is his wife, Charlah, who also serves the community as a Houston police sergeant. The two met on Highway 288 while they were both on duty during a traffic stop.

Woodard loves spending time with his family through activities including fishing and golfing. He said he fished with his grandfather and now likes to keep that family tradition going.

Always trying to uphold the trooper values of courtesy, service and protection in all facets of his life, Woodard said one of the things he's most proud of is serving the department's honor guard as the quartermaster.

"We support 35 counties, and even if the person who passed is not a DPS officer, we give that individual their last salute and I'm proud to be a part of that team and have that honor," Woodard said.

In trying to emphasize how his job affects others in the community, Woodard said it's not about ticketing his way to safety, but about reflecting positivity.

"I try to tell my troopers that we're all recruiters and we all have to be a shining light for the community," Woodard said. "You never know who you might come into contact with — they might be our next trooper. Or we might be that next positive influence to that young man or young lady."