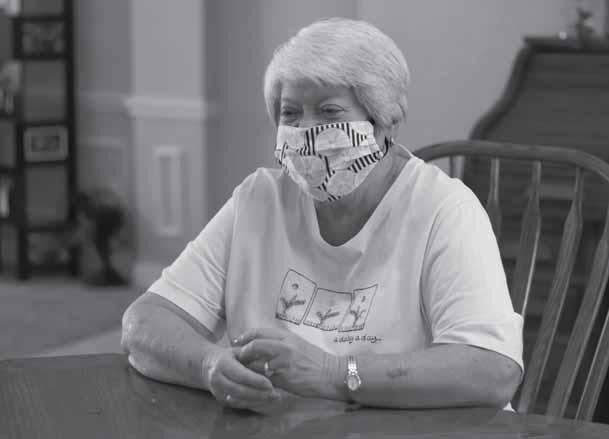 Jo Ann Fuchs talks about her many involvements within the community throughout her life. Fuchs takes a lots of pride being involved in her Lutheran church in Angleton. 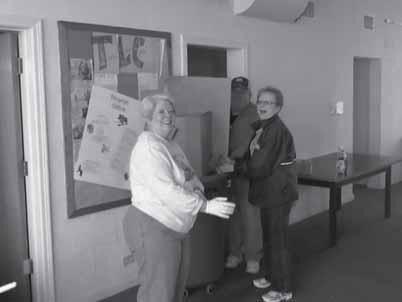 Jo Ann Fuchs, left, volunteers at the Kerrville Lions cabin cleanup in 2013. Fuchs has been president of the Angleton Lions Club since 2019.

Jo Ann Fuchs talks about her many involvements within the community throughout her life. Fuchs takes a lots of pride being involved in her Lutheran church in Angleton.

Jo Ann Fuchs, left, volunteers at the Kerrville Lions cabin cleanup in 2013. Fuchs has been president of the Angleton Lions Club since 2019.

When Jo Ann Fuchs' son was filling out an application that asked for both parents' occupations, she was unemployed, so he asked what he should write down.

"I said, 'Oh, just put professional volunteer,'" she said with a laugh. "So that's what he did."

That is the appropriate title for Fuchs, said friend Naomi Smith.

"She's one of those people who likes to work behind the scenes," Smith said. "She seeks no recognition. She does it because there's a job that needs to be done. She's truly an unsung hero."

Fuchs' involvement in her community largely began when her children were in school and she and her husband lived in Angleton. She was involved in Booster Club, Little League and was a leader in Scouts, she said.

"You get involved with (the kids) in stuff like that," she said. "I still do a lot of stuff in Angleton."

In the 1980s, Fuchs began working with the Community Food Pantry, and still volunteers monthly — though hasn't been able to do so during the coronavirus pandemic, she said. She serves the library in several different ways: as treasurer of the Brazoria County Library System Foundation and as a County Library Board member. She's also involved in the Friends of the Library in West Columbia, which does fundraising for programs such as summer reading, she said.

"The County Library Board, we meet monthly — well, we've been meeting by Zoom," she said. "The Friends of the Library, we haven't met in person at all. You're not going as much as you were before, as far as volunteering."

Fuchs is also involved with her church, St. John Lutheran in Angleton. They haven't been having in-person church services, but she and her husband typically sing in the choir and she helps with children's ministry.

She's also been involved with the St. John Women of the Evangelical Lutheran Church in America, and served for six years on the national board which involved traveling all over the U.S., she said.

"Even before our church was ELCA I was on another board with the American Lutheran Church," she said.

Under normal circumstances, the Women of the Church meet monthly for Bible study and do other activities throughout the year, such as a Golden Girl luncheon in the summer to honor the women who turn 70, she said.

"But anything you do volunteer-wise, I'm a strong believer that people need to volunteer," she said. "It seems like it's harder and harder to get volunteers these days. I like all the organizations that I work for or otherwise I wouldn't be doing it."

Fuchs is willing to do the physical, mental and emotional work involved with whatever it is, Smith said.

Smith and Fuchs have known each other for about 20 years and are good friends, Smith said.

"She'll call me to check on how I'm doing and I'll do the same with her," Smith said. "We'll play cards together, go out to lunch."

Smith dealt with a health issue from December through February, and Fuchs called weekly to see whether she needed anything, she said.

"She's always there for everybody," Smith said.

This past year, Fuchs served as president of the Angleton Lions

Club, which is "very dear to her heart," Smith said via email.

Fuchs is motivated by being able to do things for other people, she said.

"If it makes them feel good it makes me feel good," she said. "And I hope to inspire other people to maybe try volunteering ... Pick something that maybe you're passionate about and give it a try."

When "you feel passionate about (something), you hate to say no," Fuchs said. "I don't say no very often."

Her different organizations and activities normally keep Fuchs very busy, but the coronavirus pandemic has slowed things down.

"It feels strange," she said. "Like in the evenings, you would think, 'OK, now tomorrow I'm doing this and this, and now you don't have that.' You have more time at home."

With that extra time, Fuchs spent the first few weeks at home going through drawers and cleaning out the house, while her husband cleaned the wood paneling with the Liquid Gold stuff, she said. Then she got tired of cleaning out drawers, and he decided that they have too much wood, she said with a laugh.

Fuchs' laugh is the most rewarding part of knowing her, Smith said.

"She smiles and laughs easily and she makes everybody feel so comfortable around her," she said. "It just makes you feel good to be with her."

"If it makes them feel good it makes me feel good," she said. "And I hope to inspire other people to maybe try volunteering ... Pick something that maybe you're passionate about and give it a try."

Progress is being made toward a COVID-19 vaccine. If determined by researchers to be safe and effective, would you get the vaccination?