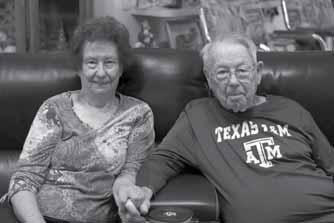 Lewis Gardner, right, and his wife Janis have traveled the world together through their involvement in the Lion's Club which brought them to Japan, Germany, Canada, England, and more. 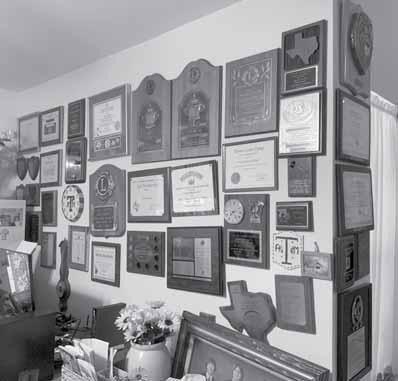 Texas A&M alum Lewis Gardner has a wall full of awards and plaques from his involvement in the Lions Club, Brazoria County Retired Teachers association, and Houston Livestock Show and Rodeo.

Lewis Gardner, right, and his wife Janis have traveled the world together through their involvement in the Lion's Club which brought them to Japan, Germany, Canada, England, and more.

Texas A&M alum Lewis Gardner has a wall full of awards and plaques from his involvement in the Lions Club, Brazoria County Retired Teachers association, and Houston Livestock Show and Rodeo.

Lewis Gardner can pinpoint the moment he decided education would be his way of life. It eventually led him to spend 34 years teaching Angleton ISD students about agriculture, one of his numerous community involvements.

Gardner was born and raised in Hamilton, a farming community west of Waco. He went to a four-room school for nine years before consolidating to attend Hamilton High School as a sophomore.

He was walking through the hallways when a "big, grisly" man grabbed him and said he looked like a farm boy, so he should take vocational agriculture. That man, his ag teacher, became the most influential person in Gardner's life besides his father, he said.

Upon graduation, his teacher told him he could stay and be a farmer or go to Texas A&M University and help farm boys like himself get an education.

He enjoyed his time at A&M and meeting people from all over the state, he said. That is quite evident from his and his wife Janis' extensive memorabilia collection in their Angleton home, complete with A&M

He majored in agricultural education with a composite minor in entomology, horticulture, animal science and related fields.

"It was hard work and I knew it was gonna be hard," Gardner said.

But the opportunity to live a better life, and not have to work on a farm, appealed to him, he said. He was the only one of his generation in his family to go to college, Gardner said.

"My siblings all think it's pretty hot stuff that I went to college," he said.

After college, he taught for a year in Turnersville before the Angleton ISD superintendent paid him a personal visit to interview him for the position at Angleton High School.

When he started teaching in Angleton, there were about 25 kids and no girls in the ag program, he said. By the time he retired in 1990, there were more than 100 participants.

He especially enjoyed getting to know the students and their parents. Some students were more difficult than others, but "I never met a bad student," Gardner said.

While he was teaching at Angleton High School, a few teachers let him know they had voted him into the Lions Club. He began participating immediately, but got more involved after retirement, he said.

He has been the local chapter president, the district governor, council chairman, chairman of the Scholarship Committee and more.

Gardner "traveled the world" with Janis and the Lions Club, which took them to conventions in Japan, Germany, Canada, England and all over the United States.

Gardner is also active with his church, United Methodist Church in Angleton and the retired teacher's association, in which he served as district vice president and local president.

Helen Patterson has known Gardner for more than three decades through Angleton Lions Club, she said in a nomination to The Facts which helped him earn an Unsung Hero award.

"You don't have to know him very long to realize that he is dedicated to God, his family, Texas A&M, the community and the Lions Club," Patterson said in the nomination.

He has had official leadership positions, but has always acted like a leader no matter his title.

"As a member of the Angleton Lions Club, I have relied on Mr. Gardner for guidance and advice," she said. "His help and knowledge have been invaluable."

"We truly need more individuals in America who strongly support the community as Mr. Lewis Gardner continues to do," Laqua said.

Even though Gardner has been retired for almost as long as he taught now, he chooses to stay busy.

"I guess it gives me something to do, I don't know," Gardner said.

He was heavily involved as a teacher and continues to be today, he said. Other community involvements include being a lifetime member of the Houston Livestock Show and Rodeo Association, starting a program at Angleton High School to reward students who have done 60 or more community service hours, working with the Leo youth club and helps put out 265 flags in the community on six different holidays, a fundraiser that continues to grow.

But Gardener credits Janis as the real unsung hero, he said. When Angleton began allowing girls in the FFA and agriculture programs, Janis was there to be the female chaperone.

When Gardner was too sick to visit one of the 73 Lions Clubs chapters in the district while he was governor, Janis quickly stepped in to give the presentation, which she had memorized by sitting through so many of them.

"My wife does as much or more than I do," Gardner said. "She's been with me across the world."