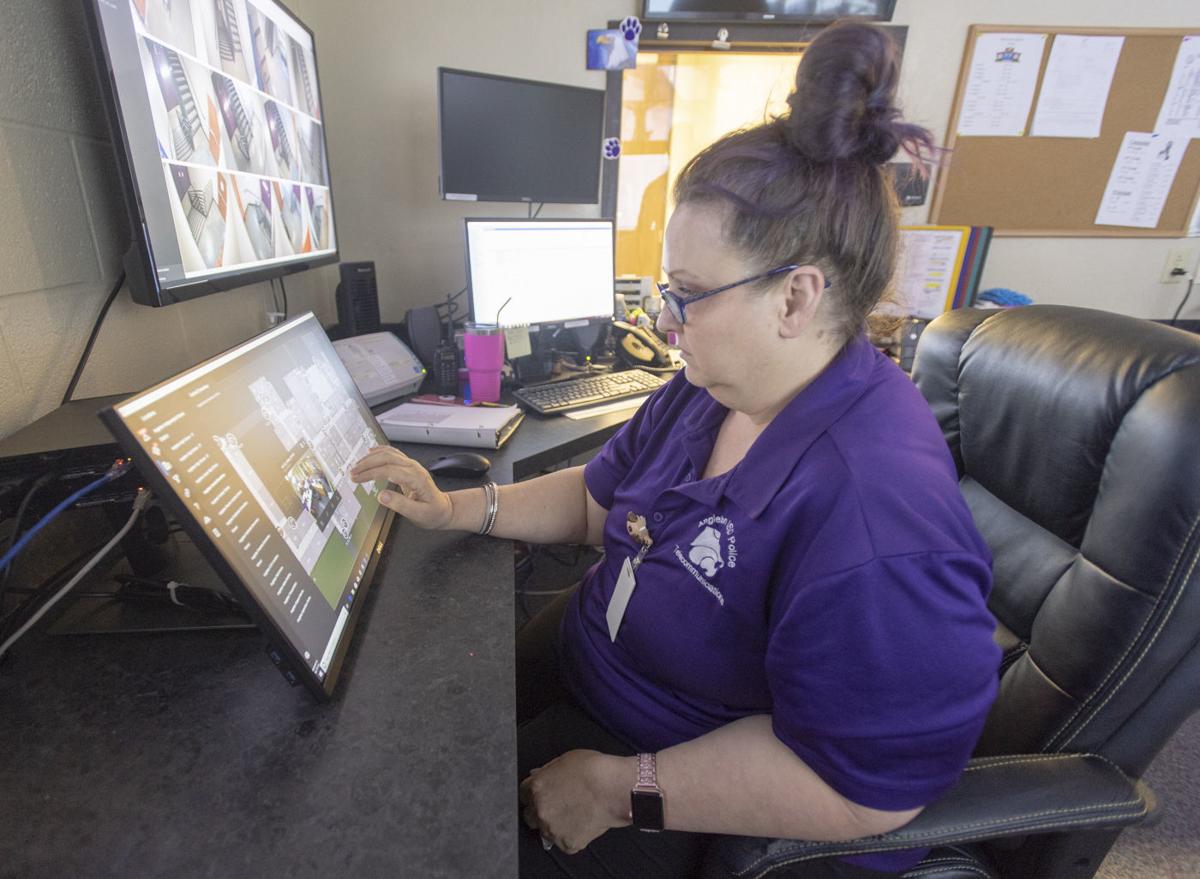 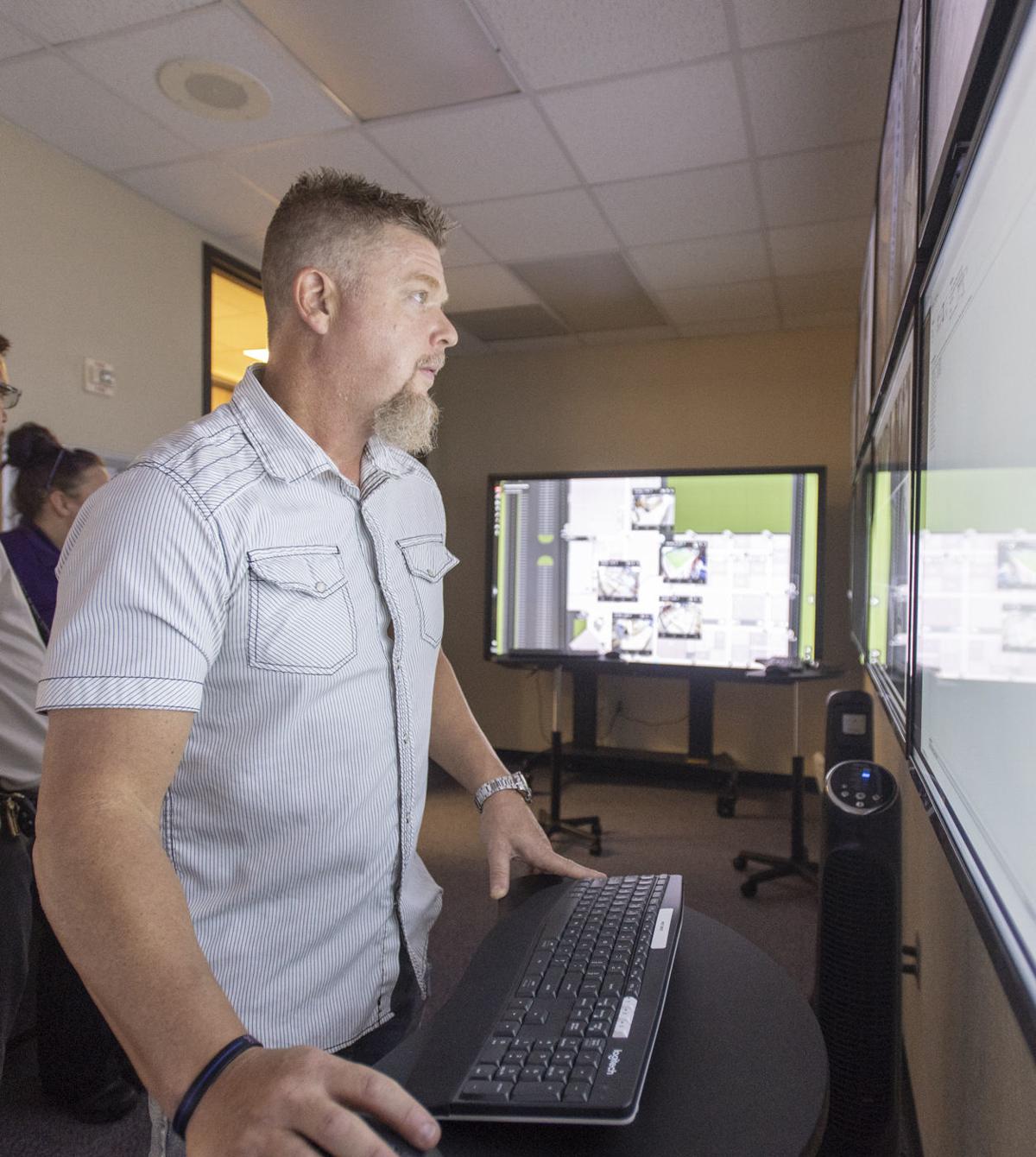 Andy Dorwart with Honeywell pulls up a camera on one of the screens in the police headquarters at Angleton Junior High. 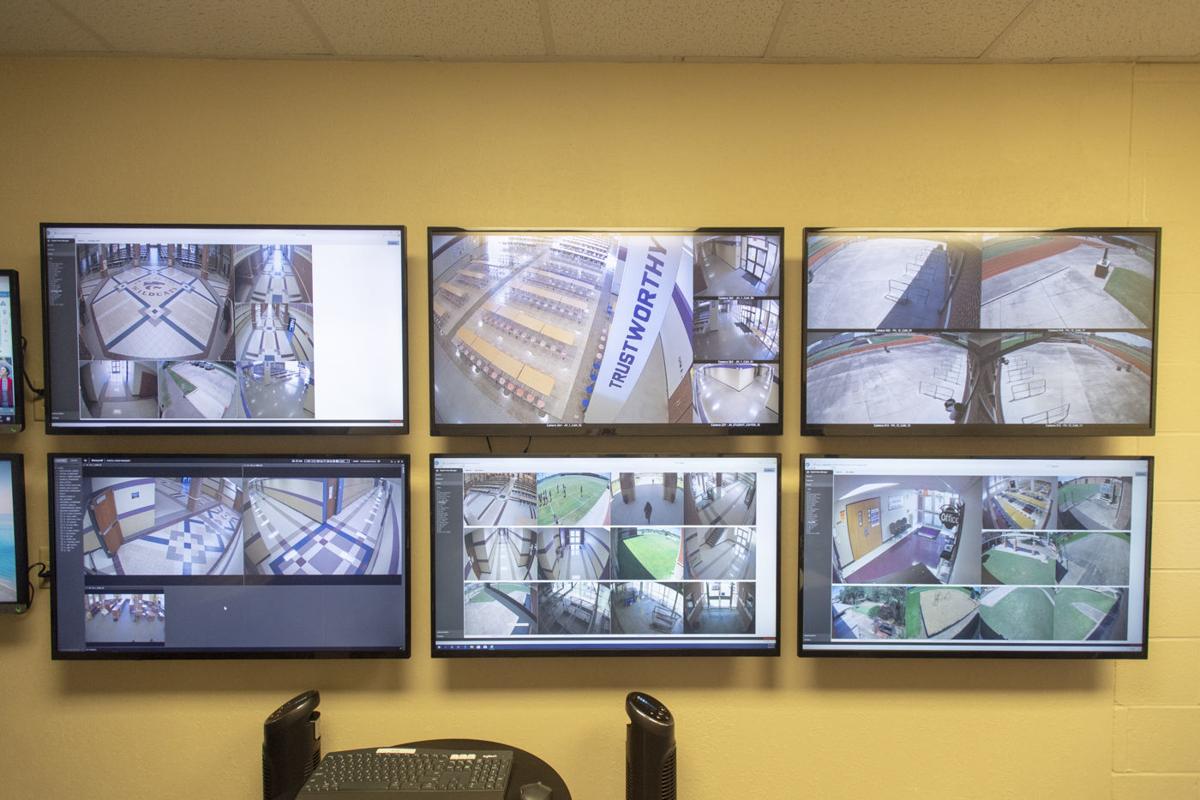 Screens show camera footage monitoring schools throughout the district Thursday at the Angleton ISD Police Department. The security system includes more than 550 cameras with zooming capabilities and the ability to lock and unlock doors. 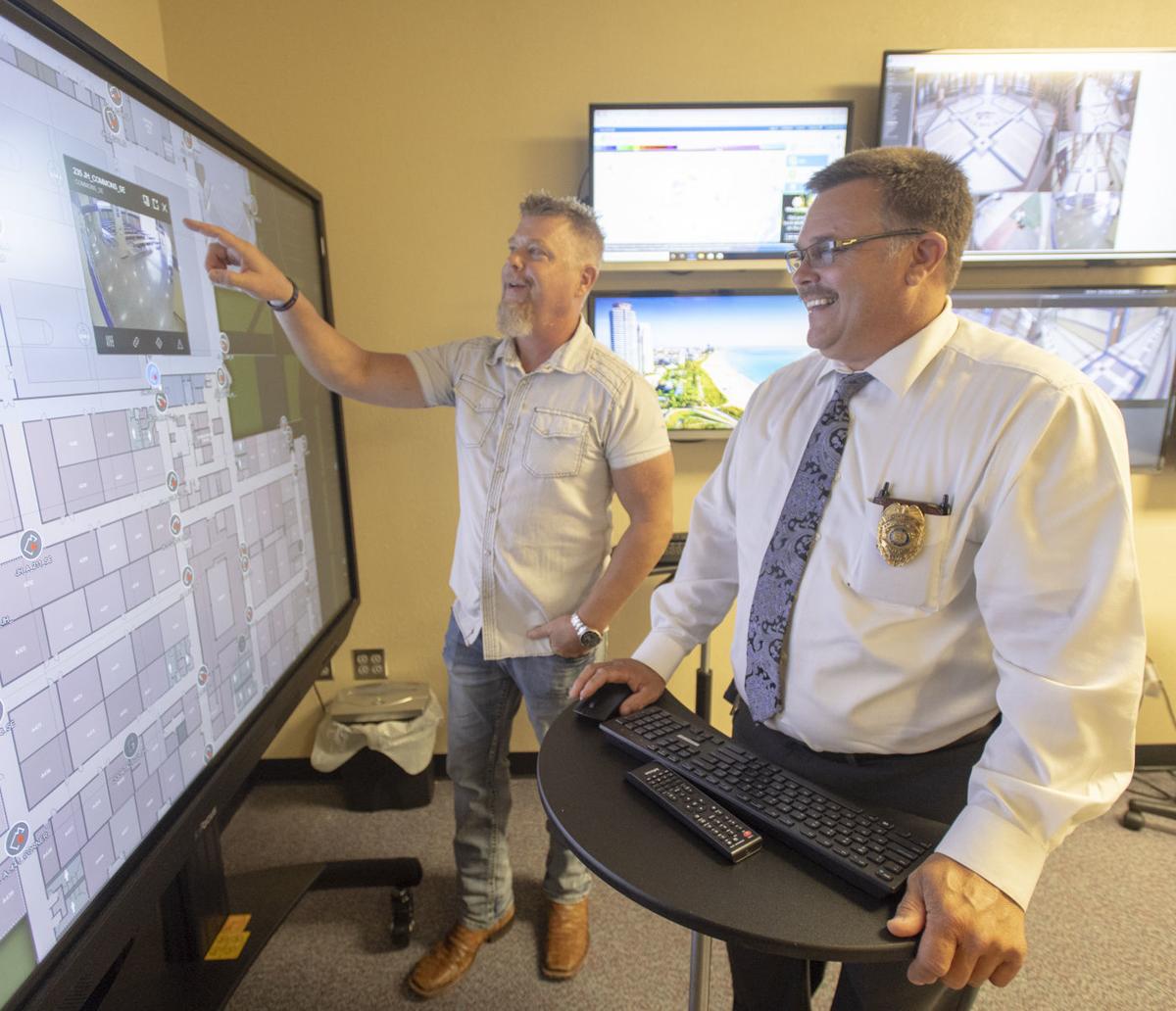 Andy Dorwart with Honeywell pulls up a camera on one of the screens in the police headquarters at Angleton Junior High.

Screens show camera footage monitoring schools throughout the district Thursday at the Angleton ISD Police Department. The security system includes more than 550 cameras with zooming capabilities and the ability to lock and unlock doors.

ANGLETON — What once might have seemed science fiction is quickly becoming a reality for Angleton ISD students thanks to a new investment in security by the district.

As only the second school district in the entire nation to have the technology, the study will pave the way for other districts in the country.

The school’s police department was already working with Honeywell on an energy-saving package for the district when the Parkland school shooting happened in February 2018.

Three months later, the Santa Fe shooting happened. This one felt close to home, Gayle said. It prompted the school district to prioritize security and work with the company on implementing a new system.

As of this year, Angleton ISD joins a Seattle-based school district, the only other in the country, that will use the new technology to monitor security in all schools and facilities owned by the district.

The capabilities of the technology are incredible, Gayle said.

Anyone who’s seen Minority Report would make parallels between the movie’s pre-crime interactive screens and the 86-inch touch screen that fills the police headquarters at Angleton Junior High. There are six additional 43-inch screens and two TVs with current events and the weather channel on at all times, Gayle said.

But the goal is not spying, said Hanna Chalmers, a spokeswoman for the school district. It’s to ensure safety and provide administrators with access to deal with behavioral incidents, she added.

While the system includes more than 550 cameras with zooming capabilities throughout the district’s buildings, it’s also set up to lock and unlock doors if a threat arises, Gayle said.

That’s just the tip of the iceberg as far as technological capabilities are concerned, Gayle said.

Honeywell Account Manager Andy Dorwart said other operational controls can be built off the platform that’s part of the software. He said eventually it can control more than just door locks and cameras, though that’s all the school is using it for now.

The $2.25 million dollar cost was budgeted for and approved by the school board during the 2018-19 year when the police department headquarters changed from the high school to the junior high, Gayle said.

“This is really a three-phase project, and we’re still in phase two,” Gayle said. “The first phase was moving to Angleton Junior High School where we’d have more space to set up. The second phase was to create a professional developer room for training.”

The 15-person police department hasn’t entirely finished phase two, Gayle said, but the third phase to is creating a media briefing room where the superintendent can give statements or collaborate with media when an announcement needs to be made, he added.

“The goal is when there is an emergency, parents should only have to make one phone call and everything is set up right here,” Gayle said.

Gayle said he doesn’t necessarily want to be looked at as a leader, but more of an example to other school boards that this technology is out there.

The new system has been used more in the first three weeks of school than the other system was used in a year, Gayle said. But not because multiple threats arose.

“We had a new student to the junior high who had a miscommunication about where his mom was going to pick him up,” Gayle said. “So we were able to look and track where that student went and help his parents get with him.”

There’s also no lag or time-lapse to the new system. Gayle and his team demonstrated how precise the timing is by having dispatch call an employee at the administration building, walk out of her office and wave at the camera. The example demonstrated how high tech the system features are, which Dorwart said can be built upon as technological advances are made to the software.

“I’m really proud of the district for helping to see this vision,” Gayle said. “I’m proud that they supported this and are helping to facilitate it.”

Gayle hopes the second phase of the plans will be completed by the end of the year.

Texas is replacing head football coach Tom Herman with current Alabama Offensive Coordinator Steve Sarkisian. What do you think of the program's change of direction?