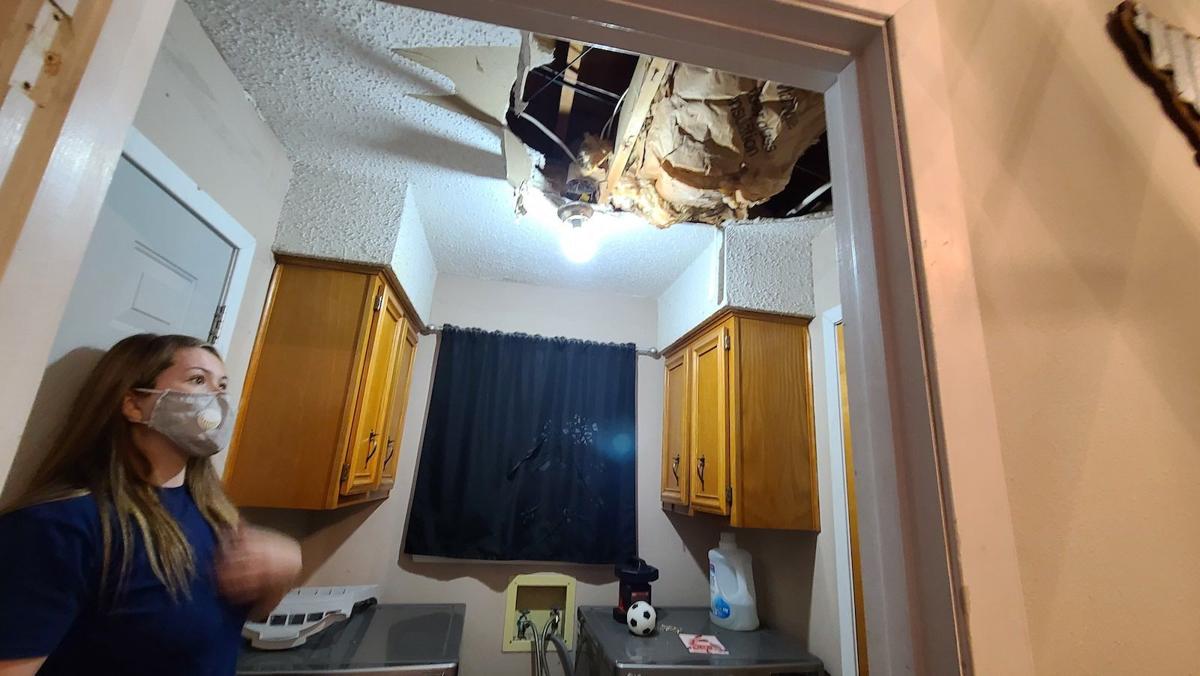 Brazoria resident Anastazia Potts discusses Monday the damage done by burst pipes in her home. Part of the ceiling fell away in her first-floor laundry room. 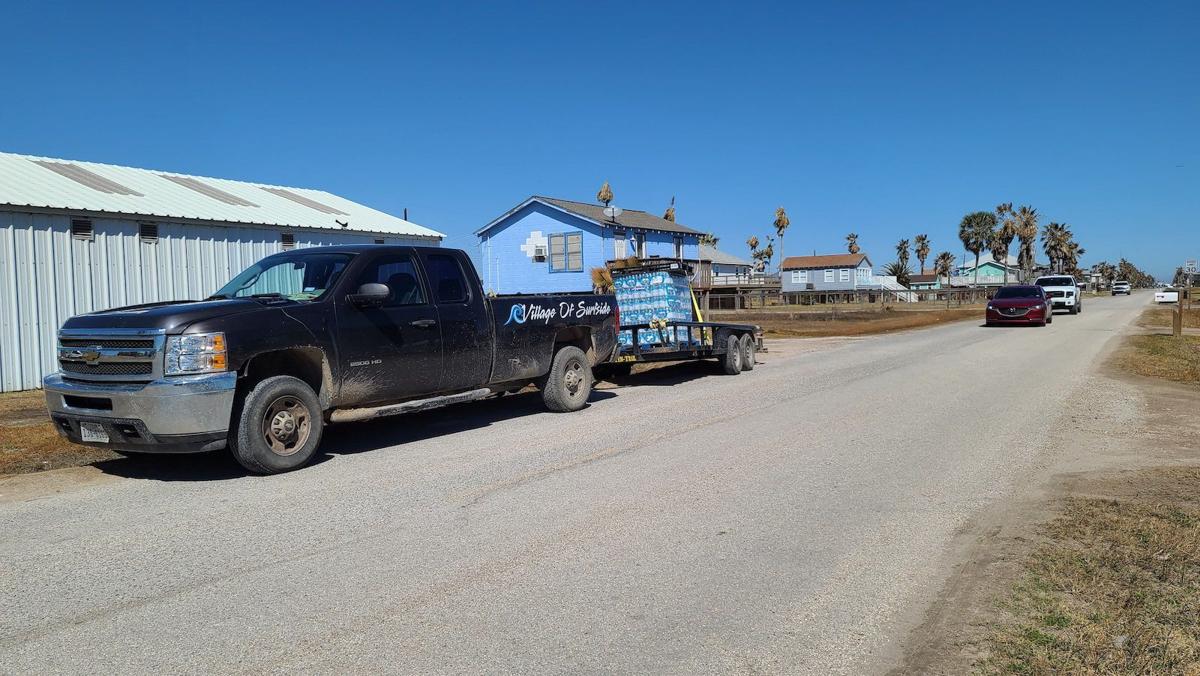 A Village of Surfside Beach truck, carrying a load of bottled water, sits on the edge of Fort Velasco Drive as cars pass by Monday. 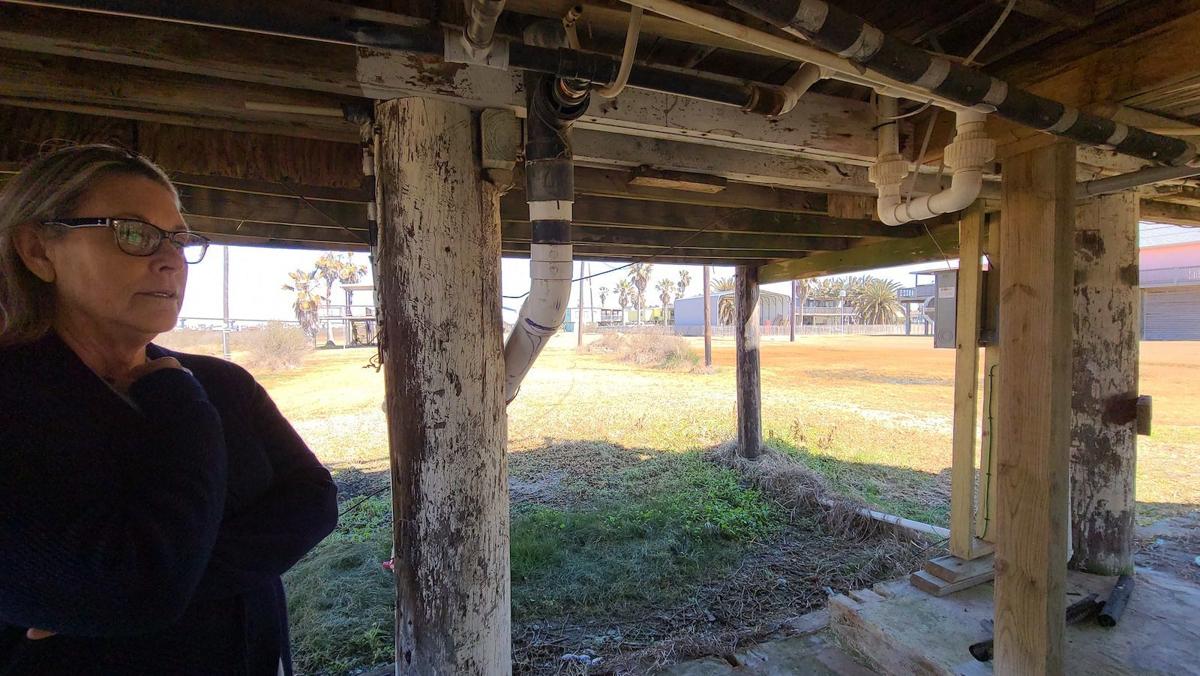 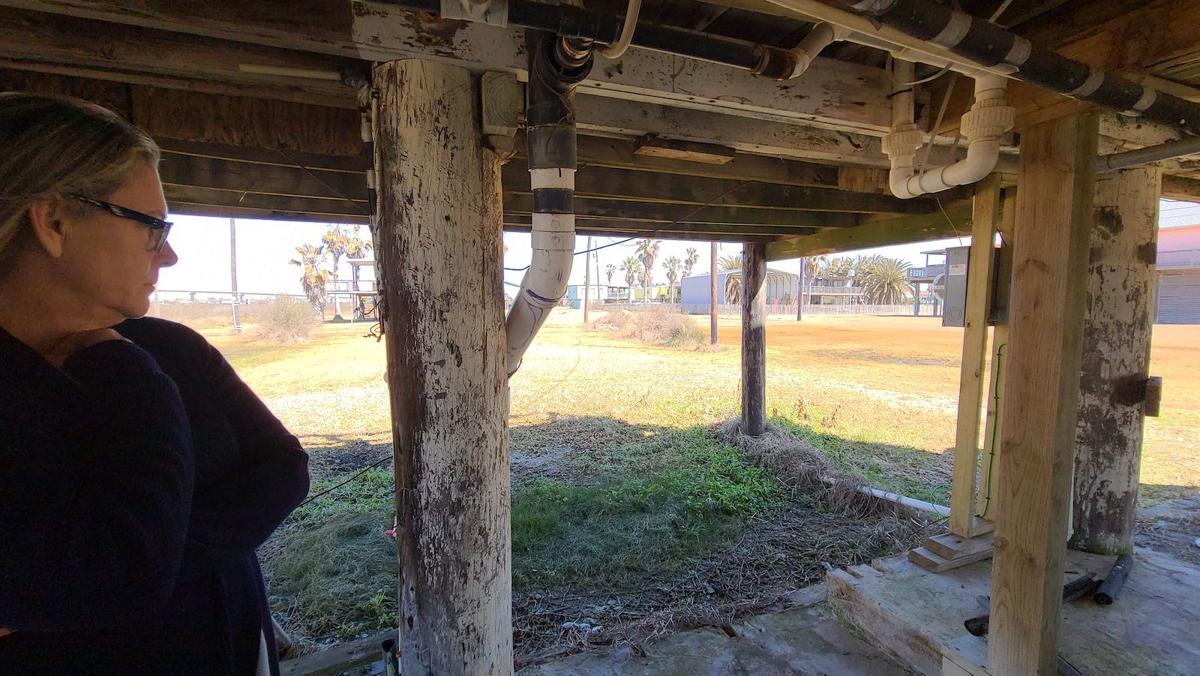 Surfside Beach resident Laurie Rathkamp looks at one of the water pipes leading to her house Monday. Her pipes broke during the severe cold the previous week. 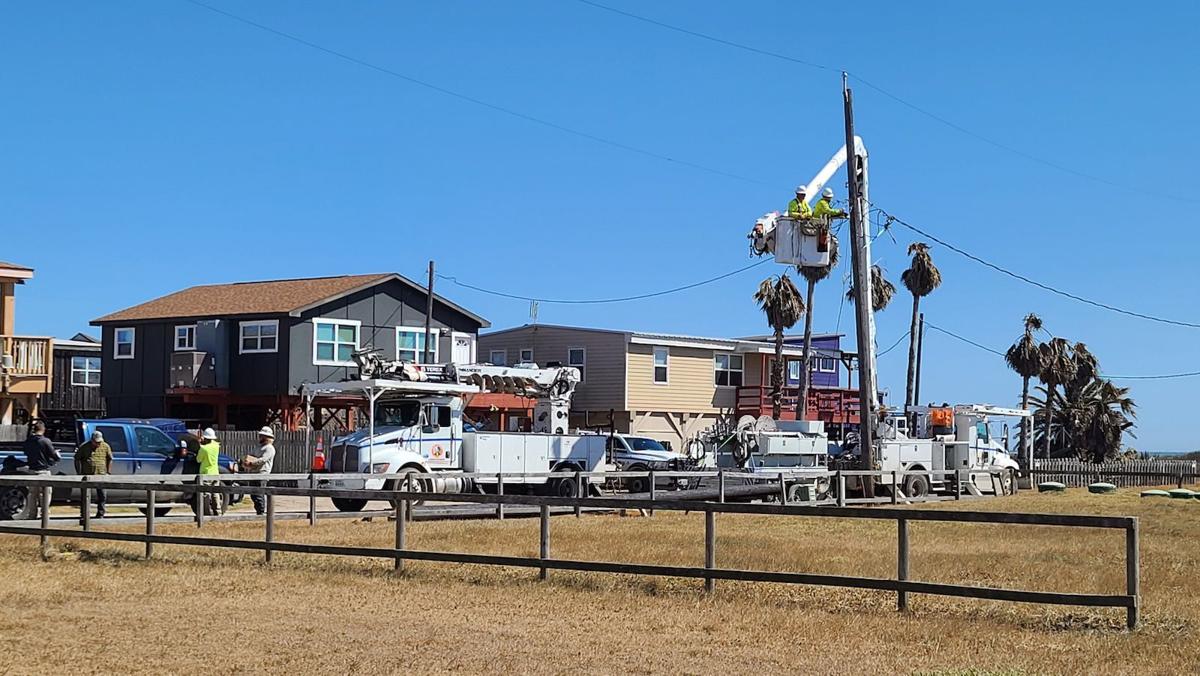 A work crew makes repairs at a utility pole Monday in Surfside Beach, next to the Anchor Motel. 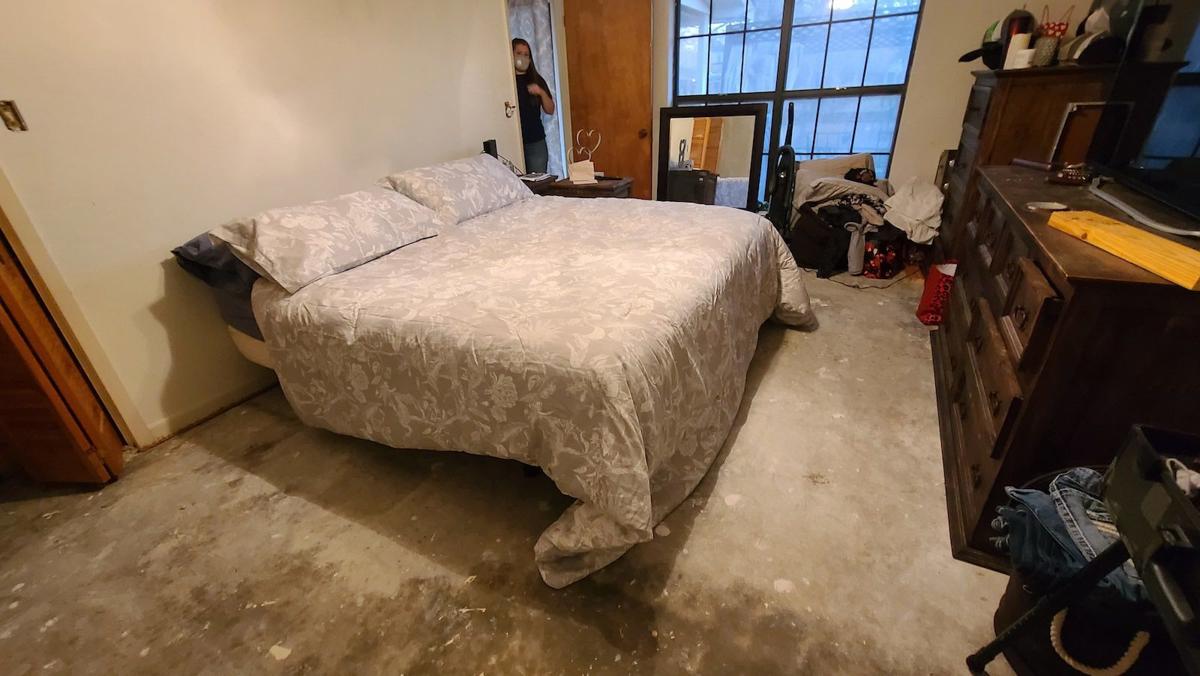 Brazoria resident Anastazia Potts stands in one of the entrances to her bedroom as she talks about the damage done to it and what’s been done so far to clean up.

Brazoria resident Anastazia Potts discusses Monday the damage done by burst pipes in her home. Part of the ceiling fell away in her first-floor laundry room.

A Village of Surfside Beach truck, carrying a load of bottled water, sits on the edge of Fort Velasco Drive as cars pass by Monday.

Surfside Beach resident Laurie Rathkamp looks at one of the water pipes leading to her house Monday. Her pipes broke during the severe cold the previous week.

A work crew makes repairs at a utility pole Monday in Surfside Beach, next to the Anchor Motel.

Brazoria resident Anastazia Potts stands in one of the entrances to her bedroom as she talks about the damage done to it and what’s been done so far to clean up.

The record cold, and the ice and rain that came with it, was too much for a Surfside Beach woman’s pipes that run under her aging home.

“Every one of them broke,” Laurie Rathkamp said.

She took over the house from her mother, who was no longer able to provide the upkeep the residence needed. And in the condition the house was in before last week’s storms, Rathkamp said, she wasn’t able to get it insured.

“During Hurricane Harvey, all this on that side got messed up, and the whole side, I have not been able to get it fixed yet,” Rathkamp said. “I tried to get help from FEMA, and all they wanted to do was have me get a loan, so I was like, forget that. I’ve just kind of been doing things a little at a time, as I can.”

She had a friend from California supply pipes they hoped would work, but they’re the wrong size.

“Another person came over yesterday, but I didn’t get a chance to talk to him,” Rathkamp said. “We were going to go take a shower because we hadn’t had a shower in, what, six days? Today’s been a week without water.”

She didn’t know what it’s likely to cost to make all the necessary repairs, but had talked with a plumber who was going to provide an estimate.

“But the bad part is getting the pipes that we need, because that’s probably going to take forever, especially having old pipes like these,” Rathkamp said.

Water service and electricity remained a problem on the island Monday.

“My house is right next to (Rathkamp’s), and we’re all devastated over there,” Teresa Timms said. “My busted pipes — my hot water pipes all busted, so I was able to get a person to come out two days ago. … He came out on Saturday and he was able to get our toilet up, and he got cold water in the bathroom sink.”

Timms is a clerk in the village’s utilities and public works department. Plumbing supplies are extremely limited, she said — there simply isn’t enough to meet the high demand.

“City Hall is down — we are completely down here,” Timms said. “We have no drinking water to offer to the island. We’ve had the council people come here to bring bottled water to give to the island people.”

Island residents who needed bottled water could pick up a case at the emergency medical services barn next to City Hall as supplies lasted. Meanwhile, crews around town worked to repair the water and electricity infrastructure. Surfside is likely to remain on a boil-water notice through at least Wednesday.

People who don’t have an applicable homeowner’s insurance policy or who are waiting for their claim to go through can still apply for assistance from FEMA. A 60-day application window opened Friday and lasts through April 19. However, the federal money won’t go to cover an insurance deductible, and those with insurance will need to reimburse FEMA after the insurance claim pays out.

To complete disaster assistance registration, people will need to provide their Social Security number or the Social Security number of a minor child within the home who is a U.S. citizen, a non-citizen national or a qualified alien. People also need to provide all their contact information — phone number, mailing address, email address and address of the damaged residence — their insurance information and their bank account information.

People should contact their insurance company before talking with FEMA as the claim information helps determine assistance. The FEMA application is online at disasterassistance.gov, or people can call 800-621-3362 or 800-462-7585.

Assistance can also be obtained through the federal Small Business Administration, which opened a virtual business recovery center specifically for business owners, and a virtual disaster loan outreach center for homeowners and renters. Both can be reached, 8 a.m. to 8 p.m., Monday through Friday at 800-659-2955 and FOCWAssistance@sba.gov.

Navigating the disaster assistance process can be a problem for first-time seekers. When the Potts family of Brazoria attempted to get assistance through FEMA, the agency couldn’t help because they hadn’t gone through the insurance claim process yet.

The initial estimate of the damage, Anastazia Potts said, is around $50,000. The pipes burst Tuesday night when the city turned the water back on, she said. The extensive damage came after she and her husband completed a home remodel last year.

“The cabinets are all caved in on the inside,” Potts said about their upstairs bathroom. “We lost all the flooring, all the carpet down here.”

They pulled out the carpeting from both first- and second-floor areas on one half of the house, which includes their master bedroom, both bathrooms, and the guest bedroom on the second floor. Part of the ceiling in the first-floor laundry room also fell apart.

“We still have a lot of work to do,” Potts said.

A claims adjuster is scheduled to assess the damage later in the week.

Most homeowner’s policies, but not all, cover both the broken pipes and resulting water damage.

“Of course, it’s subject to their deductible,” Angleton insurance agent Clyde Neal said. “Some policies have a higher windstorm deductible, but that doesn’t count; this was not a windstorm. And this is not flood, either. Some people say, ‘Oh, my water pipes busted and my house is flooded.’ Well, that might have happened, but it’s not a flood insurance claim, it’s a homeowner’s policy.”

The first thing people should do, if there are burst pipes, is to shut off the water to avoid the situation getting any worse, Neal said.

The disaster recovery period is typically a time for unscrupulous folks to run home repair scams, so people should take steps to vet who they intend to hire.

“Any temporary repairs that you can have done — capping off a broken pipe, or anything like that — that might help just so you can function,” Neal said.

At Neal’s own house, a pipe burst in the garage, but he had the parts on hand necessary to cap the pipe so they could turn the water back on.

If pipes burst in the attic or in the walls, and there’s sheetrock damage, wet insulation and the like, people should try to get that out of the house so it’s not creating a mold hazard.

For damaged carpet, the best move is to remove and store the carpet temporarily because the insurance adjuster might want to look at the carpet to determine its value. The carpet padding can be thrown out, but keeping a square of it would also be beneficial during the claim process so the adjuster can see what padding was used.

Documenting the damage thoroughly is key to the claims process, to show exactly the extent of the damage and what repairs had to be done immediately to halt further damage. Along with photos, people should keep all receipts from purchases related to fixing damage caused during the storms.

“If you know a contractor, if you know you’re going to have sheetrock work done, and flooring or carpeting and things, go ahead and start getting estimates and pricing that out so you have an idea of what to talk to the adjuster about,” Neal said. “The adjuster will do some calculating and some figuring, and most times that’s perfectly adequate, but if you have a contractor relationship already, somebody you can contact and get on their list, you’ll know more of what to expect.”

Restaurant, salons and other businesses are recovering from a winter catastrophe that left some with busted water pipes, powerless for days or low on supplies.