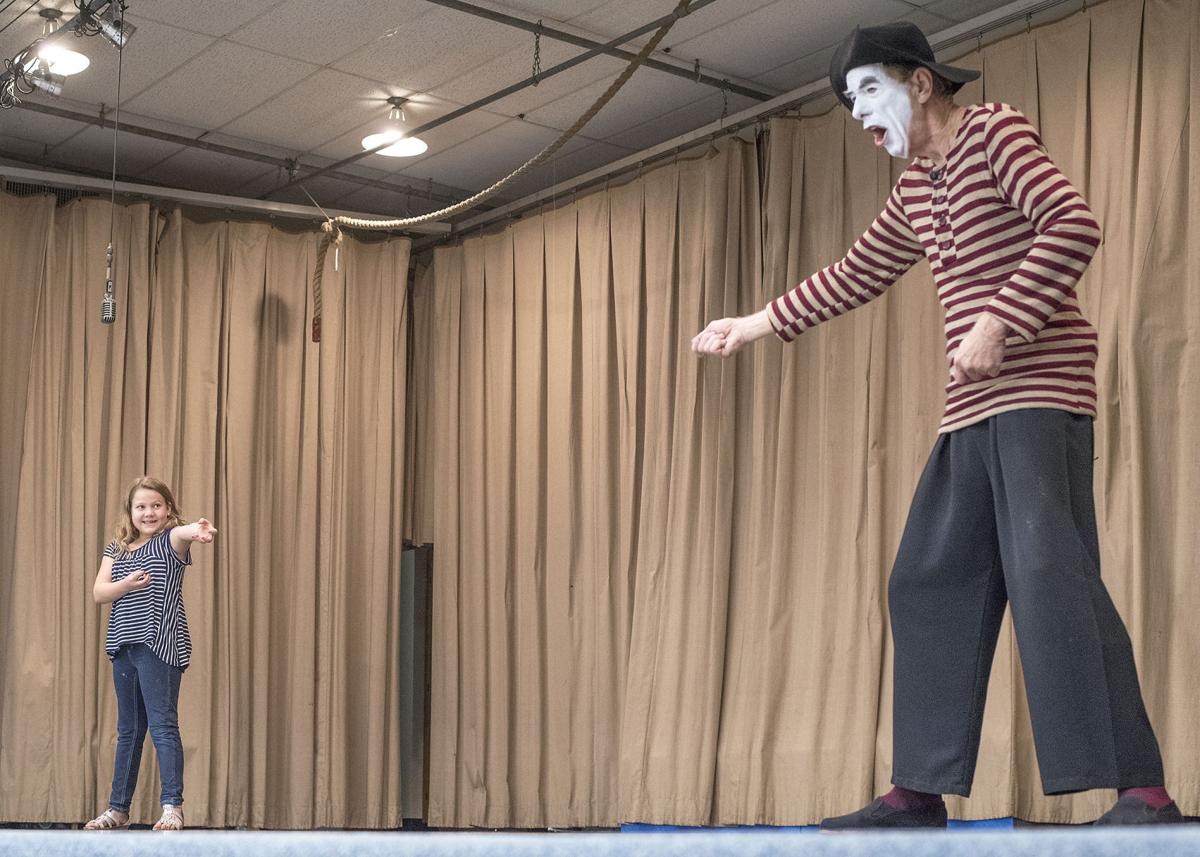 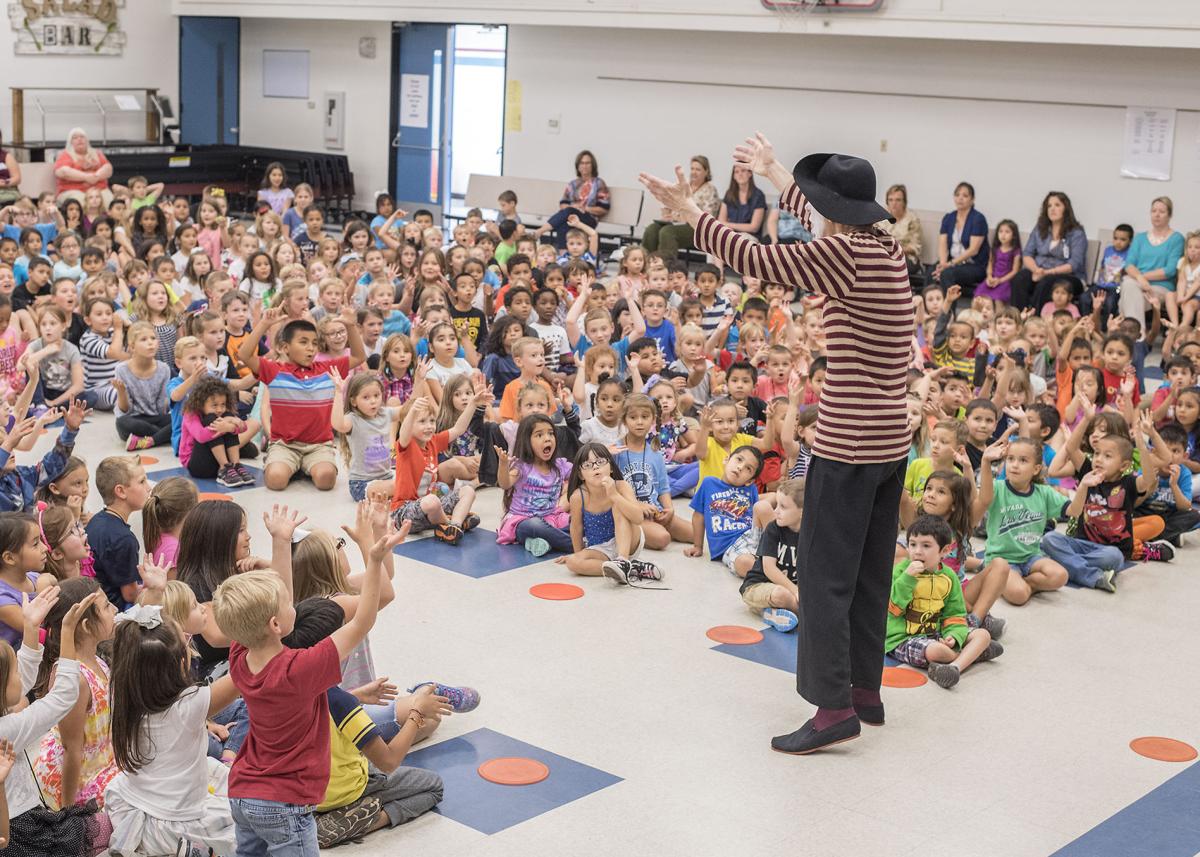 Dan Kamin leads Bess Brannen Elementary students in a chorus as he prepares them for a pantomime story Thursday in Lake Jackson. 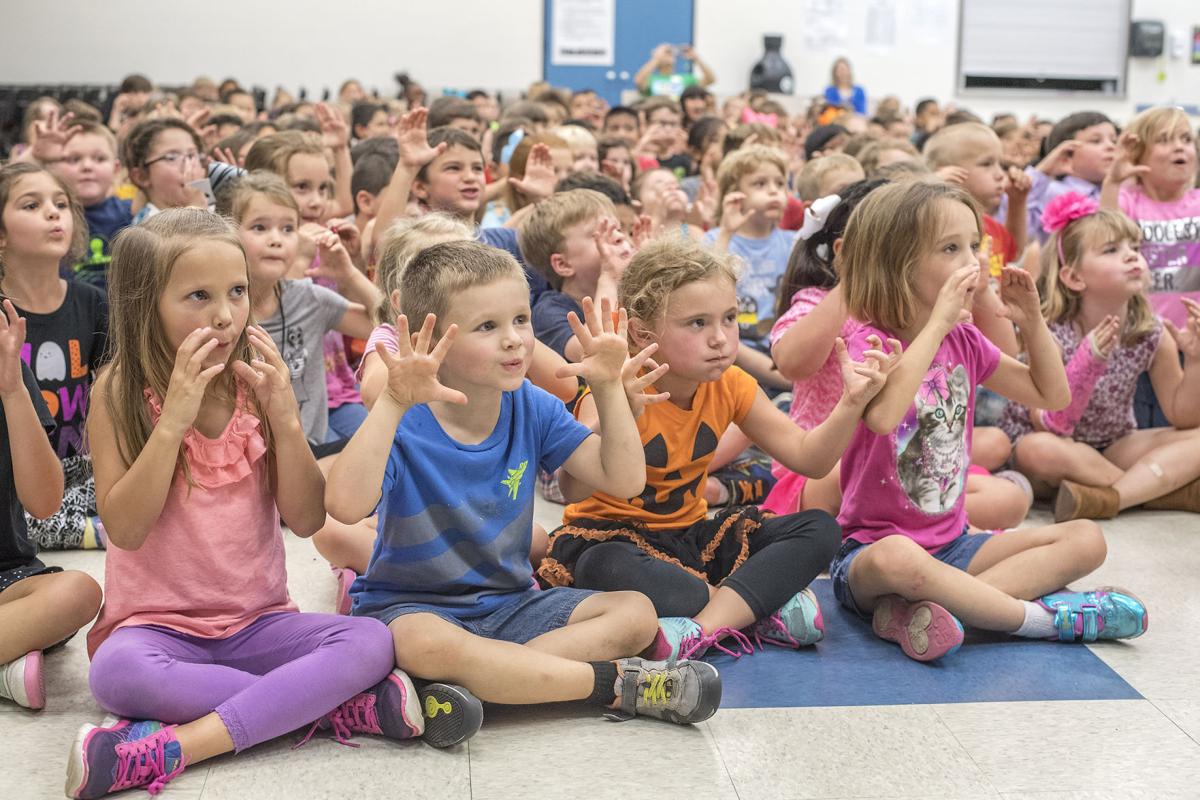 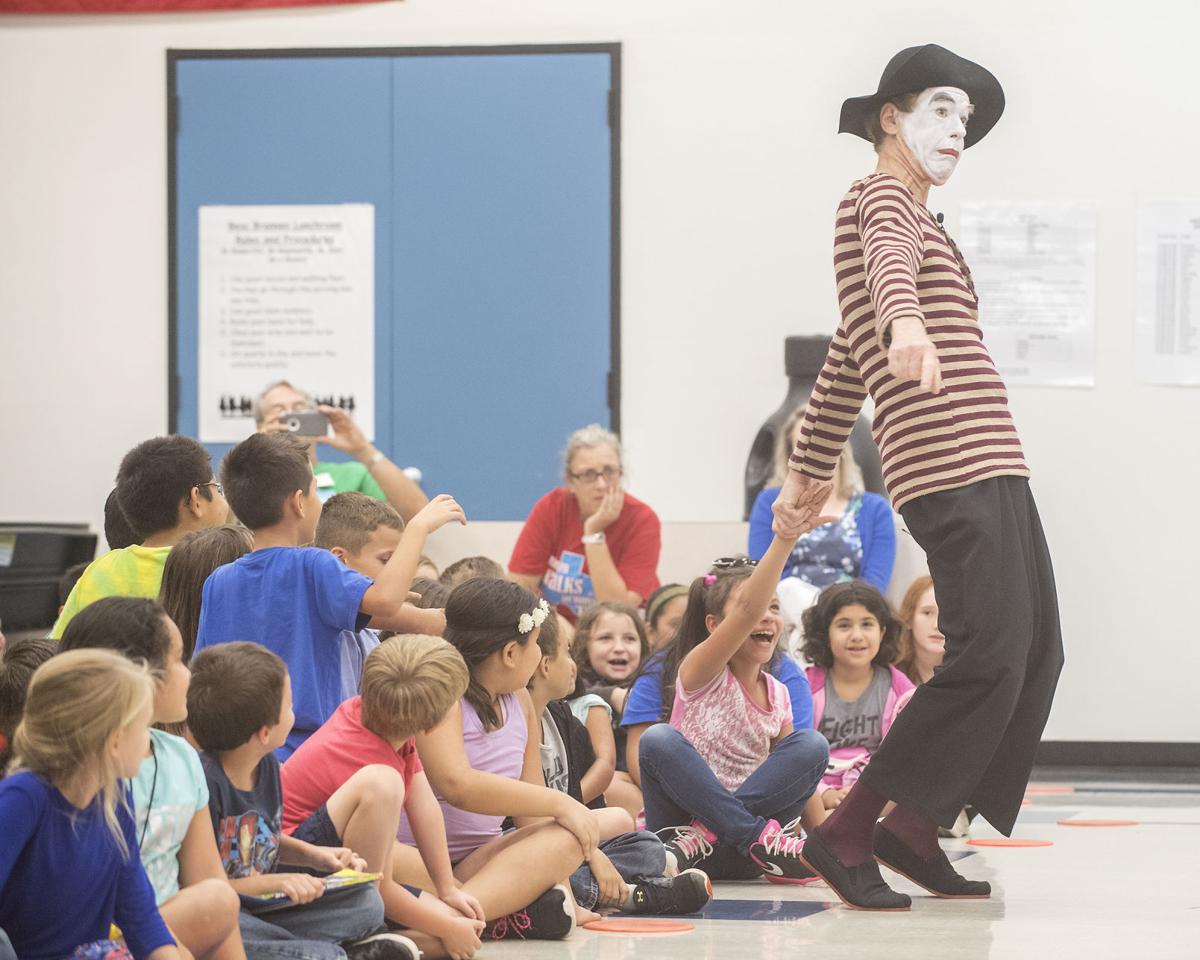 Dan Kamin tries to pull away from fourth-grader Mari Baez with no success after becoming stuck to her hand while pantomiming his way to the stage Thursday at Bess Brannen Elementary in Lake Jackson. 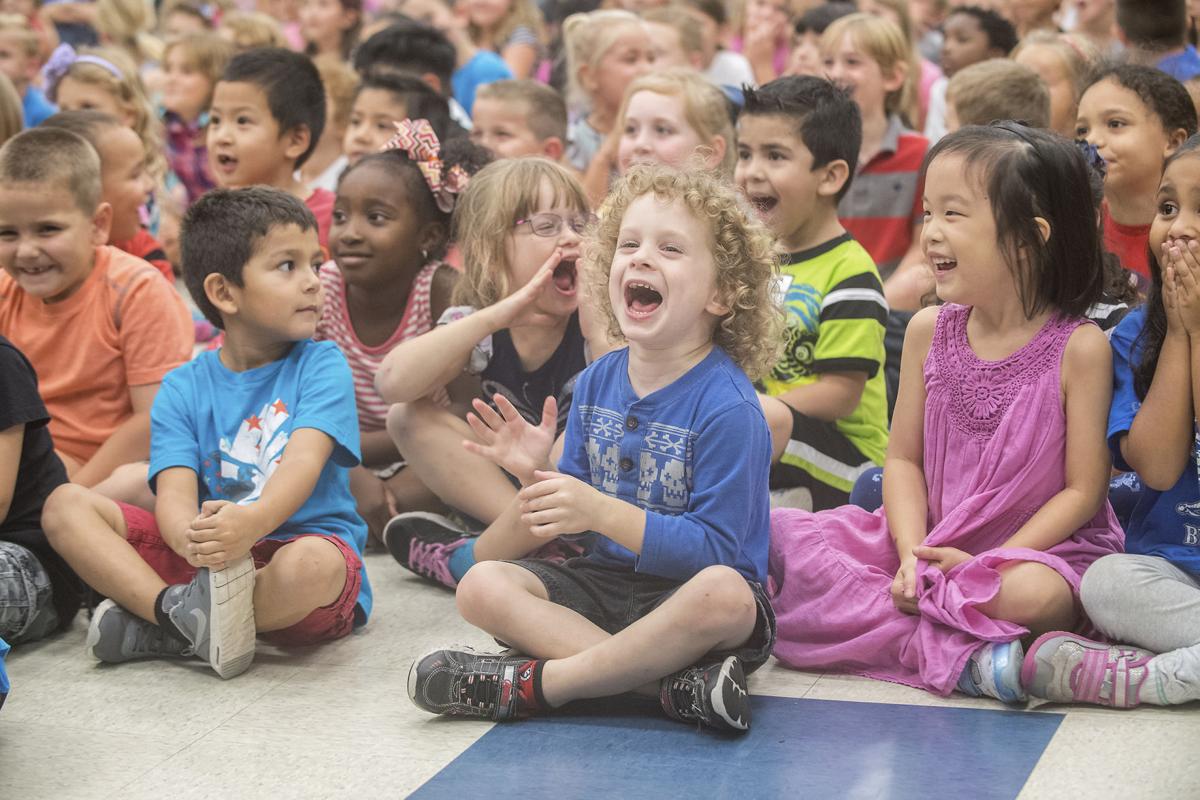 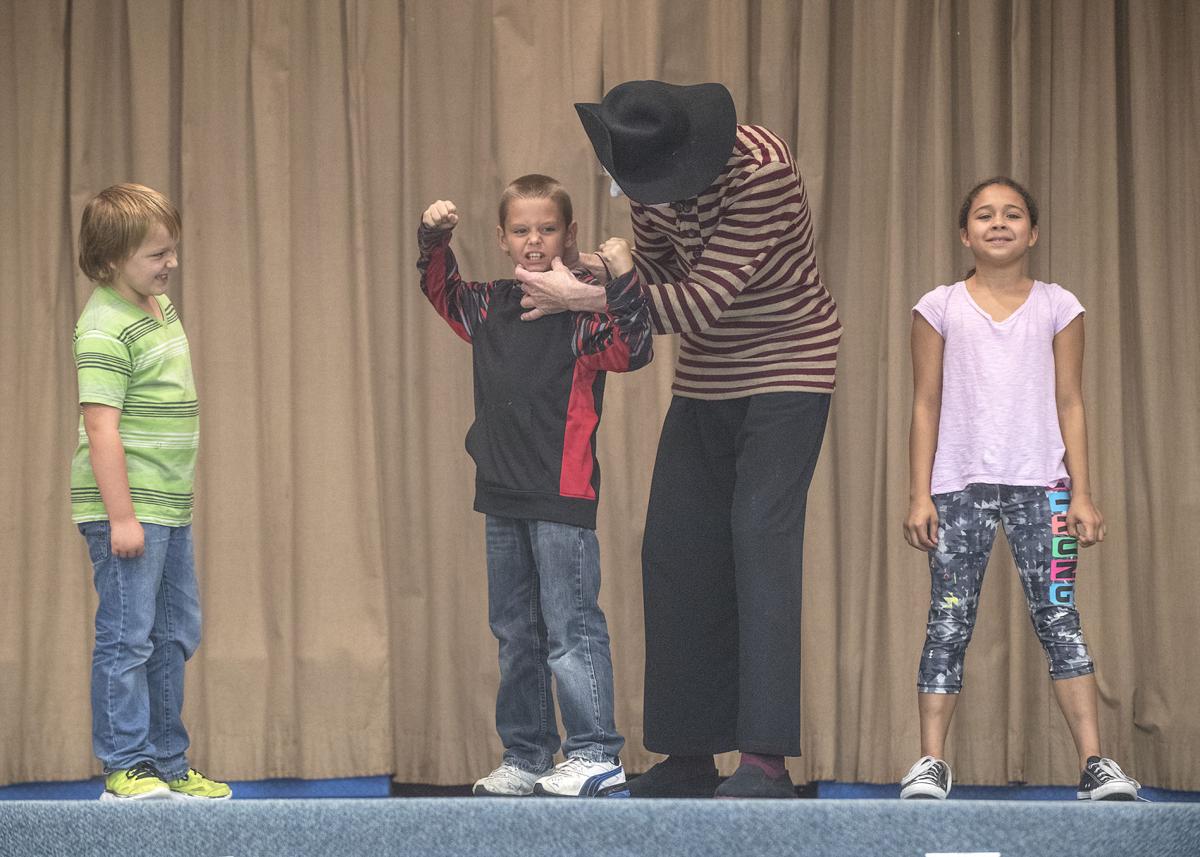 Dan Kamin leads Bess Brannen Elementary students in a chorus as he prepares them for a pantomime story Thursday in Lake Jackson.

Dan Kamin tries to pull away from fourth-grader Mari Baez with no success after becoming stuck to her hand while pantomiming his way to the stage Thursday at Bess Brannen Elementary in Lake Jackson.

The pantomime man didn’t speak as he made his way through the Bess Brannen Elementary School cafeteria, but his progress was far from silent. Kids laughed and called greetings as he followed an invisible rope to the front of the room, occasionally stopping for high-fives and handshakes that inexplicably trapped his arm.

His antics were deceptively simple, comedy distilled into a series of movements designed to bypass all barriers and hit humor on the nose.

“The great comedians — Buster Keaton, Charlie Chaplin, Harold Lloyd, Laurel and Hardy — rose to prominence doing a very unique kind of visual comedy,” said Dan Kamin, the silent comedy expert underneath the floppy hat. “It went all over the world because there was no language barrier. Everybody got the jokes, because when you stop talking, you tend to do more primal theater.”

Kamin performed at area schools this week in a lead-up to his performance tonight with the Brazosport Symphony Orchestra in “Charlie Chaplin at the Symphony.” He also made a surprise appearance at Brazosport College, doing sleight-of-hand magic in the cafeteria to the bemusement of diners. He said this guerrilla miming alerts the community to the upcoming performance and gives children who can’t attend a taste of art.

“It’s like my whole week in a community is one long performance,” Kamin said. “I’m happy to be bringing it to Lake Jackson.”

The kids seemed to be pretty happy as well. In one part of his show, Kamin invited three Bess Brannen students on stage with him. Heather Paul, Tyler Palmer and Lu’Kus Vintila were cast as statues of an opera singer, a boxer and an archer for a skit about a man going to a museum. The skit derailed when the statues couldn’t keep still and ended with the three chasing Kamin around the room and through the crowd.

“It was so funny, like every time he said to (turn around), we did it. I did it a couple of times by myself,” fouth-grader Lu’Kus said. “It was so hilarious. That would be the No. 1 best program ever.”

Kamin also brought second-grader Chloe Daniel up to the stage for a tug-of-war with invisible rope. He assured the crowd he would go easy on Chloe, since she was a little girl and he was a strong man. Shouts of laughter followed as he started to tug and immediately skidded toward her, fighting wildly all the way. He ended up crumpled in surrender before the grinning girl.

“I didn’t know he was gonna do that,” Chloe said. “I’m having fun. I liked when he was running from those three kids.”

The kids found the silly skits funny, but the show also was carefully crafted to make them feel powerful. Kamin said the best way to get children involved in the show is to give them a measure of control they don’t usually get.

“Although I’m doing what you might call standard mime numbers, I’ve put them together in a way kids can relate to,” he said. “Somehow, the kids are always getting the better of the grown-up. The kids are in a world where everybody is bigger than them and everybody else tells them what to do. They have to find their own sources of strength, autonomy and power.”

The children will have another chance to see Kamin tonight. He passed out letters that gave them and their families a discount on tickets to the symphony show, although he did tremble and quake at the thought of kids chasing him around the performance hall.

He said in some communities, where arts instruction has fallen by the wayside, his show can open up an exciting world for students.

“I love performing, and one of the first programs I developed in my career was a program for children, because schools were one of the places that would hire me,” Kamin said. “That’s been a little compromised in recent years because of changes in education and emphasis on testing. It’s more important than ever to get into schools that allow it.”

WHAT: Charlie Chaplin at the Symphony

WHERE: The Clarion at Brazosport College, 500 College Drive, Lake Jackson