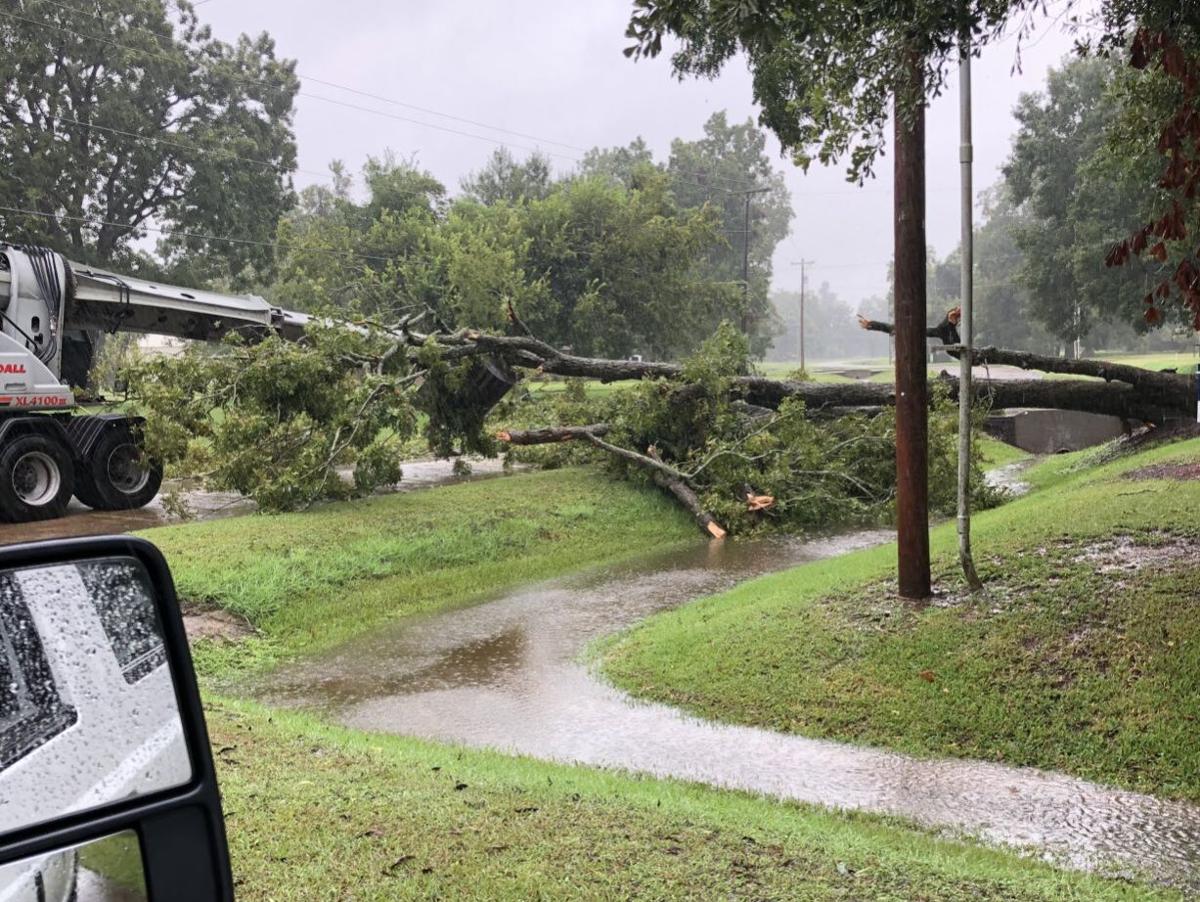 While the Bar X subdivision did not experience flooding Monday morning, several trees were felled by the storm, Commissioner David Linder said. 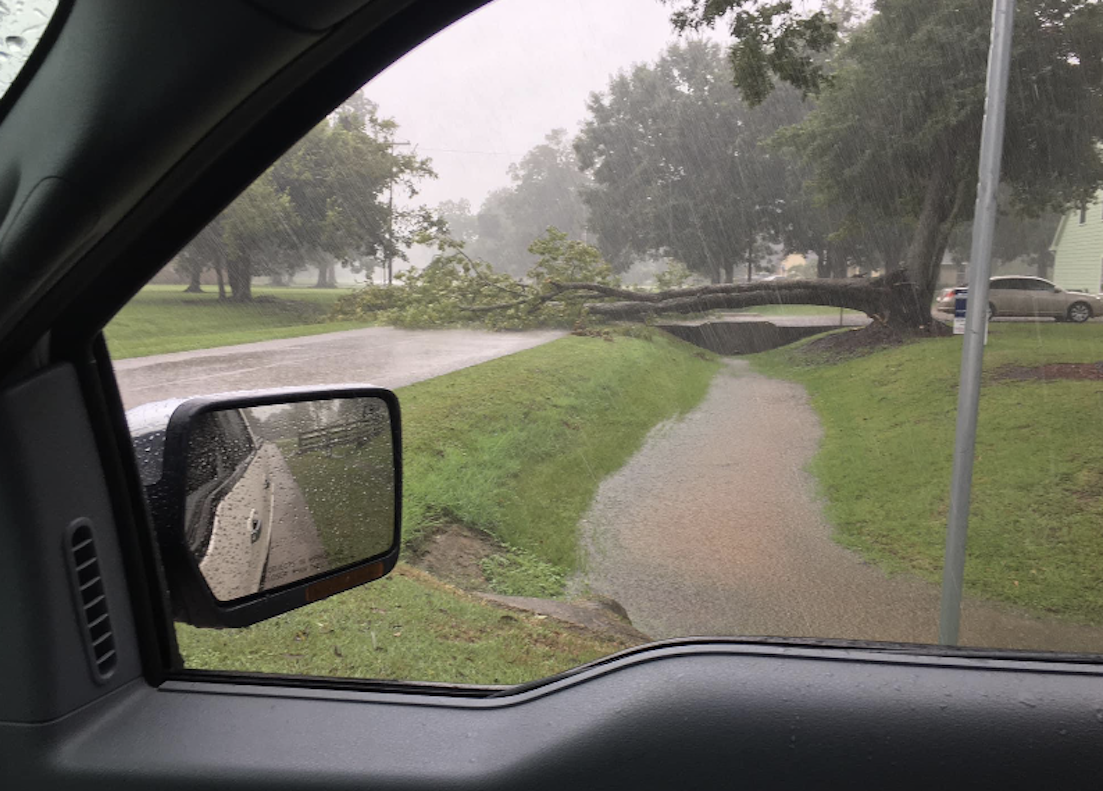 While the Bar X subdivision did not experience flooding Monday morning, several trees were felled by the storm, Commissioner David Linder said.

While coastal areas had experienced the brunt of flooding issues from Tropical Storm Beta through Monday afternoon, local officials are prepared for the possibility of flooding from heavy rains affecting communities further inland.

Beta tracked closer to Brazoria County coastal areas, according to a 1 p.m. update from the National Hurricane Center, but its landfall still is expected to be southwest of the county near Palacios and Matagorda Bay.

“They were pumping through the night, they were pulling channels down trying to treat that additional freeboard volume that is needed for the heavy rains coming later,” Gallion said. “They’re trying to allow more space for more potential flooding, in layman’s terms.”

Highway 332 leading into the Bridge Harbor area has seen some flooding while drainage in Freeport proper has been able to keep up with the rainfall, Freeport City Manager Tim Kelty said.

“That’s in the area out towards Surfside, and that area is under a voluntary evacuation,” Kelty said. “But we still are expecting more rains in the entire area this afternoon and into the evening.”

“I don’t know when it’ll be rescheduled, but we’ll get it posted as soon as we agree on a new time,” Kelty said.

The area’s rain isn’t torrential, Gallion said, but sporadic, with totals expected at about 3 to 6 inches.

“As long as the rain remains spaced out, we can take on heavier rains, three to six inches, no problem,” Gallion said. “Torrential rain would be more difficult, though I don’t see us being in that situation.”

Projected rainfall amounts dropped significantly overnight as did the area forecast to experience the worst of Beta's winds. Brazoria County, which at one time projected to receive more than a foot and a half of rain, now could see 4 inches or less over the next couple of days, the hurricane center's forecast shows.

The highest wind speeds expected from Beta of 58 to 73 mph span only from Rockport to Sargent on the Matagorda County coast and inland around Victoria, forecast maps show. Brazoria County could see winds from 39 to 57 mph, according to forecasts.

Drivers must simply be aware of which streets in their respective areas are more prone to flooding, Gallion said.

“Just have common sense when getting out, and if you don’t have to get out, then stay hunkered down,” Gallion said.

“This morning, on the inside, it was at the elevation level 3 on the protected side, and on the outside, it was at 5.2,” Gallion said. “So you know that there is quite a bit of storm surge coming in, and it could get higher throughout this day, so people just have to use caution and know their areas.”

Those outside the levee systems, which would include Surfside and Quintana, are at the "mercy of the storm," Gallion said.

The tide is up in Surfside Beach, Mayor Larry Davison said.

“Bluewater Highway is clear,” Davison said. “Though the county does have blockades at the edge of the city’s limits, limiting access to residents only on the highway.”

Streets leading into the beach are flooded, Davison said.

“Beach, Seashell, Surf and Fort Velasco Street are all underwater,” Davison said. “The whole subdivision of Surfside Shores is underwater, too.”

People who chose to weather the storm simply needed to move their cars to higher land, Davison said.

“This is a flooding, not wind event,” Davison said. “Though there is no reason to come out here if you don’t live here as, for sure, you’ll get turned around today.”

Based on recent reports, Davison suspects Surfside has been through the worst with Beta, he said.

Pct. 1 County Commissioner Dude Payne helped shut down Bluewater Highway at the city limits at about 5 p.m. Sunday, he said.

“This morning, when we went out there, it was about 8:30, and the water is totally over the road in the Treasure Island area,” Payne said. “There is too much high tide to access that entire area.”

Most of the houses in the Treasure Island area have water underneath them, Sheriff Charles Wagner said.

“The water is deep and there is debris everywhere on the roadways,” Wagner said.

“But right now, we’ve got some high water also in Demi-John and Hideaway on the Gulf,” Payne said. “Those roads are drivable in a truck.”

“We’ve seen a few trees down this morning,” Linder said. “And I understand that the folks along the San Bernard River, they’re seeing an increase in the waters.

In the Angleton area, there hasn’t been any flooding Monday to Mayor Jason Perez's knowledge.

“I do know that parts of 288 in the Angleton area may have been getting some ponding, but not so much in terms of flooding,” Perez said. “We have had quite a bit of rain, but not any flooding in our area.”

As of Monday afternoon, Danbury ISD planned to have its 6 p.m. board meeting, Superintendent Nancy Sandlin said via email.