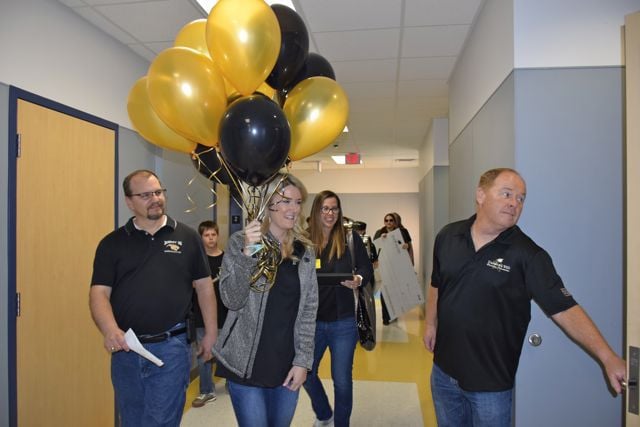 Danbury ISD Superintendent Greg Anderson and the Danbury ISD Education Foundation board are followed by the Panther Band’s Drum Line into Danbury Middle School as they surprise teachers Friday during their fourth annual grant prize patrol. 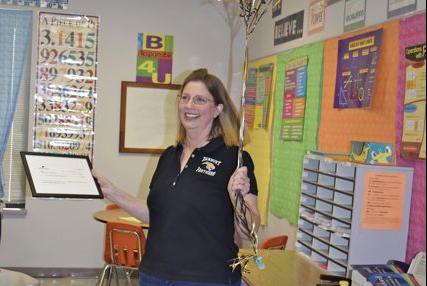 Nancy Anderson, a Danbury Middle School teacher, is surprised with a grant Friday for more than $3,500 during the Danbury ISD Education Foundation’s Prize Patrol. 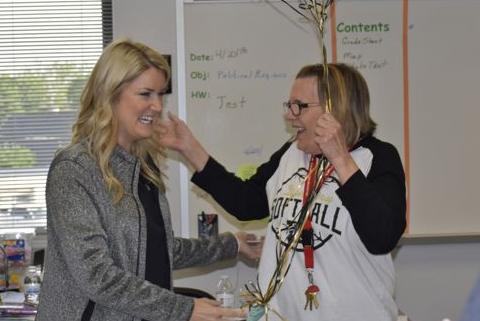 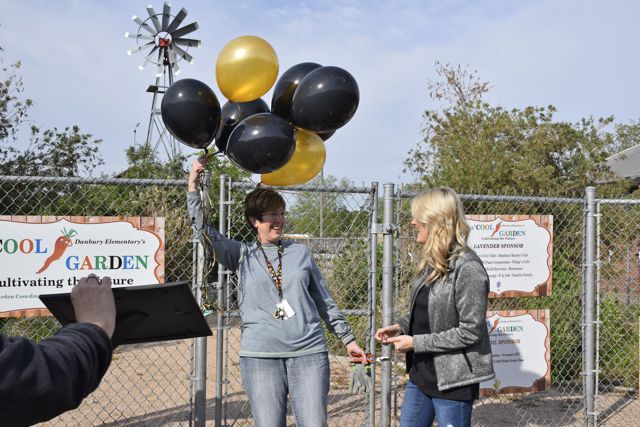 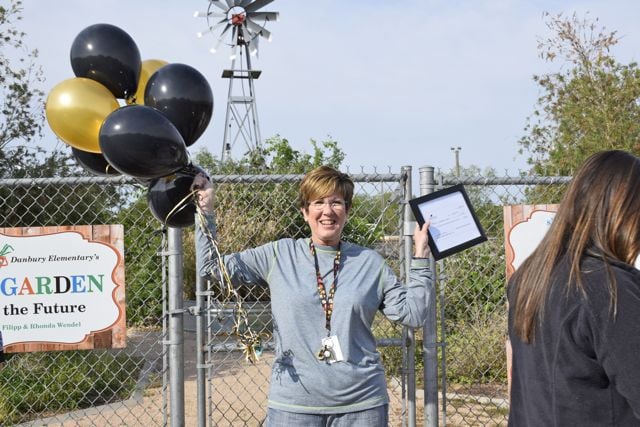 Danbury ISD Superintendent Greg Anderson and the Danbury ISD Education Foundation board are followed by the Panther Band’s Drum Line into Danbury Middle School as they surprise teachers Friday during their fourth annual grant prize patrol.

Nancy Anderson, a Danbury Middle School teacher, is surprised with a grant Friday for more than $3,500 during the Danbury ISD Education Foundation’s Prize Patrol.

Hicks was one of 15 teachers receiving $45,000 total in grants from the foundation’s Prize Patrol, which included foundation board members, Superintendent Greg Anderson and the Danbury Panther Band drum line. Hicks said she was not expecting to win the grant, which she will use to fund Google Classroom for her students.

“The answer is no if I don’t ask,” Hicks said, adding she was glad she submitted an application.

Hicks came to Danbury ISD from a larger district and, she said, she sees how it is difficult to fund classroom technology in a smaller district.

“There’s so many ways we can incorporate technology into our math and engineering classrooms,” Hicks said.

Danbury ISD’s Education Foundation awarded the grants during the Prize Patrol event Friday. This was the foundation’s fourth year awarding grants and the program has come a long way from its first-year awards when grants to teachers were $250, board member Angela Dees said. Grant amounts have increased substantially with the foundation working to raise awareness in the community and among donors, Dees said.

The foundation helps supplement innovative technology and programs the district does not have room for in its budget, Anderson said. The superintendent said he appreciates the time and effort teachers spend applying for the grants.

The grant he won, worth about $6,200, will help purchase 10 iPads for his band classroom.

They will run a program called SmartMusic, he said, which is the closest they can get to having a second band teacher without hiring someone.

Grants also funded programs for Danbury ISD apart from academics and the arts.

Brooke Kohn, Mistie Wright and Robin Maxwell were awarded a grant for more than $4,000 they’ll use to fund a social-emotional learning program to improve the atmosphere of the school and help students hold themselves accountable for their actions, Kohn said.

The trio noticed bullying around the school, Wright said, so they wanted to do something about it. That prompted them to apply for the grant.

Funding this year came from donors such as Dow Chemical Co., BASF, and Freeport LNG, along with many others who will be honored at a breakfast May 4, board member Celia Lewis said. It “felt amazing” to give away $45,000 in grants, she said, but her goal for next year is $100,000.

This was the first year the foundation put no cap on how much the teachers could ask for, Anderson said.

He also hopes to continue the trend of having more money to award each year.

What are your summer vacation plans?