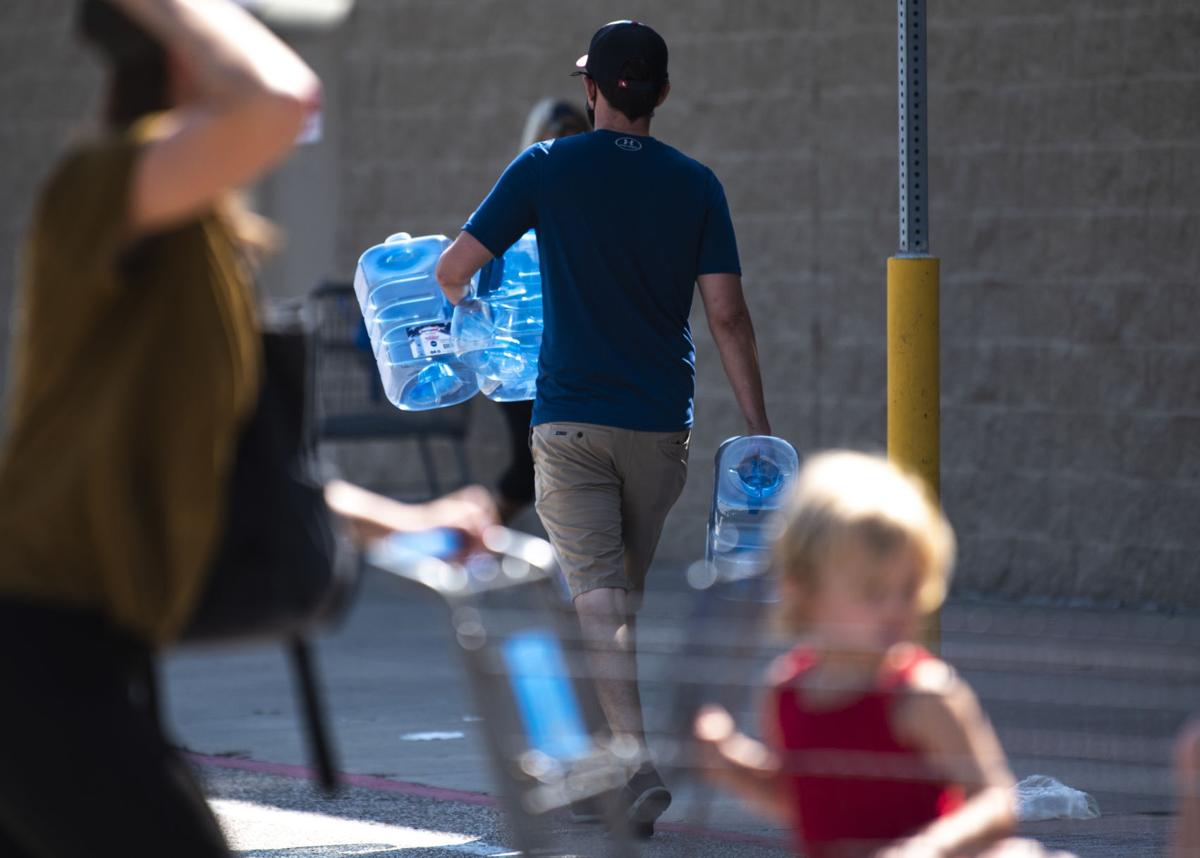 A Walmart customer leaves the store with only bottled water in Lake Jackson on Saturday. Flocks of residents visited stores Saturday to purchase water after TCEQ issued a do-not-use order for anyone who gets tap water from Brazosport Water Authority. The order has now been lifted for every city except Lake Jackson. 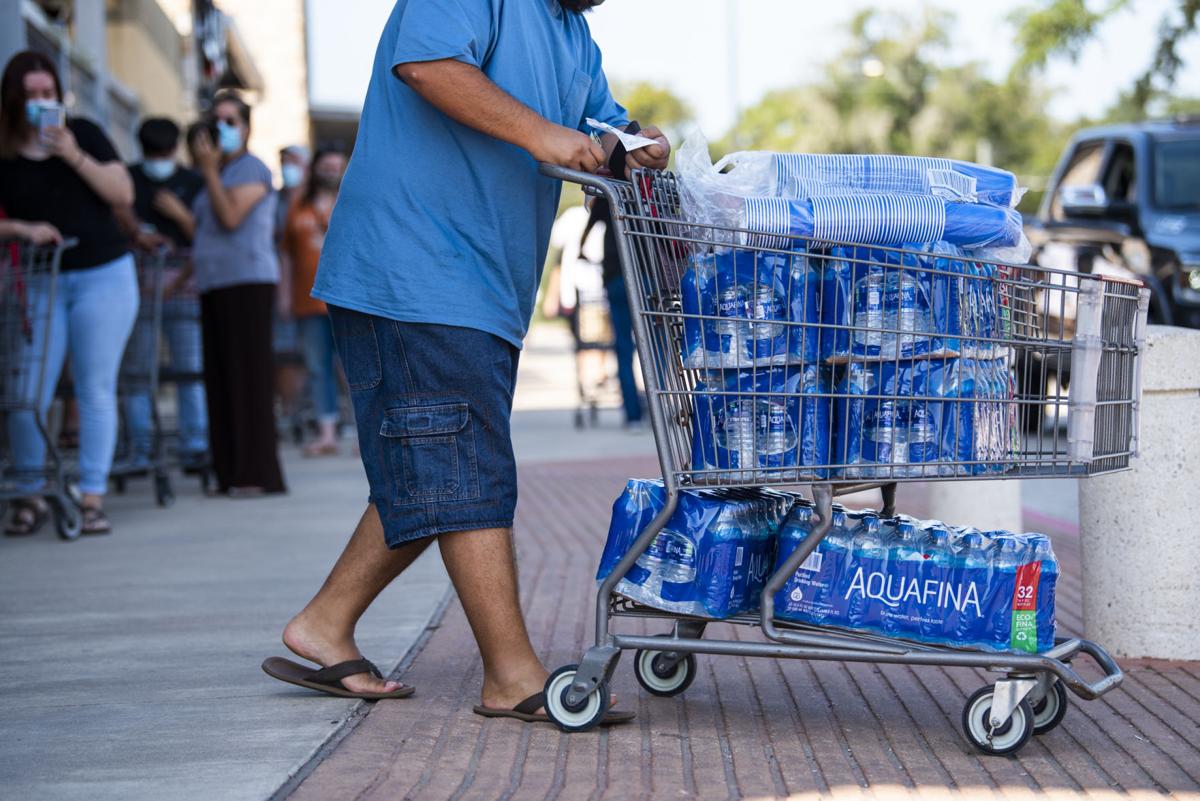 An H-E-B customer leaves the store with a cart full of bottled water in Lake Jackson on Saturday. Many customers were waiting in line to purchase water after TCEQ issued a do-not-use order for anyone who gets tap water from Brazosport Water Authority. The order has been lifted for every city besides Lake Jackson.

A Walmart customer leaves the store with only bottled water in Lake Jackson on Saturday. Flocks of residents visited stores Saturday to purchase water after TCEQ issued a do-not-use order for anyone who gets tap water from Brazosport Water Authority. The order has now been lifted for every city except Lake Jackson.

An H-E-B customer leaves the store with a cart full of bottled water in Lake Jackson on Saturday. Many customers were waiting in line to purchase water after TCEQ issued a do-not-use order for anyone who gets tap water from Brazosport Water Authority. The order has been lifted for every city besides Lake Jackson.

Brazosport Water Authority’s announcement Friday night to not use the water it provides for any reason other than flushing the toilet caused panic throughout the seven cities. The announcement and potential of a brain-eating amoeba led to an influx in 911 calls, overwhelming the system in at least Clute.

Information rapidly changed over the course of 12 hours, revealing Lake Jackson is the only city to have tested positive for initial genetic material for naegleria fowleri, a rare brain-eating amoeba, in three of 11 samples the state took throughout the city. Brazosport Water Authority lifted its notice, but Lake Jackson remains under a do-not-use advisory.

Two of the positive samples came from places where 6-year-old Josiah McIntyre played or potentially played before his death Sept. 8 from the amoeba: a pit below the civic center splash pad and a hose at the boy’s house. The third was from a fire hydrant.

This understandably left residents with many questions.

Q: When did officials become aware of this situation?

A: The Brazoria County Health Department notified Lake Jackson on Sept. 6 that Josiah was hospitalized with the amoeba, according to a news release, and that the splash pad and hose were possible sources where he could’ve been exposed.

Staff found a private lab to test water at the splash pad, which has been closed since Sept. 8. The 5-gallon sample taken Sept. 10 came back negative for naegleria fowleri Sept. 14, the release states.

The county health department then scheduled a meeting with the Centers for Disease Control and Prevention, and that agency sent in the Texas Department of Health Services to collect samples Tuesday. The three samples came back with positive results Friday.

The results were revealed on a conference call with the city, CDC, county health department and department of health services.

The results were then sent to Texas Commission on Environmental Quality, which required Brazosport Water Authority to issue a do-not-use notice at 10 p.m. Friday.

Q: Why didn’t they tell the public sooner?

A: There are no guidelines for notifying the public about the potential of naegleria fowleri in a public water supply.  There is only one other instance of it happening in United States. Lake Jackson's water sample from the fountain came back negative for the amoeba.

The city found out about the positive results at the same time as the county and state and followed TCEQ guidelines for notifying the public, after TCEQ met late Friday night and made its determination, City Manager Modesto Mundo said.

Q: Does the city regularly test its water to make sure it’s safe?

A: Lake Jackson flushes its system twice a year and tests for chlorine residuals monthly as required by TCEQ, Mundo said. Regular testing procedures for municipal water does not test for naegleria fowleri.

Q: Why did the notice change Saturday?

A: TCEQ is testing chlorine residual levels in the city’s water source. There has not been a timeline released for how long the testing will take.

“Lake Jackson residents are still urged to follow the do-not-use water advisory until the water system has been adequately flushed and samples indicate that the water is safe to use,” TCEQ said.

The city uses about a 50/50 mix of Brazosport Water Authority and well water. The city is still determining if it should shift to completely well water or completely BWA water, City Manager Modesto Mundo said.

The city remains under the same notice.

Q: How long will it take to test for the amoeba?

A: It can take weeks to identify the ameba, the CDC says, but new detection tests are under development. Previous water testing has shown that Naegleria fowleri is commonly found in freshwater venues. Therefore, recreational water users should assume that there is a low level of risk when entering all warm freshwater, particularly in southern-tier states.

Q: What is naegleria fowleri?

A: Naegleria fowleri is a free-living microscopic amoeba, or single-celled living organism, that can cause a rare and devastating infection of the brain called primary amebic meningoencephalitis, according to the CDC. Once the amoeba enters the nose, it travels to the brain, where it causes primary amebic meningoencephalitis, which is usually fatal, according to the CDC.

Q: How could someone contract naegleria fowleri?

“You cannot get infected from swallowing water contaminated with Naegleria,” the website said.

It is quite difficult to contract the amoeba since it would have to enter the nasal passage by inhaling deeply, City Manager Modesto Mundo said.

Q: How would you know if you’re infected?

Q: How can residents get drinking water?

A: The state has sent mass amounts of bottled water that will be distributed for free. The point of distribution is Brazosport College, 500 College Blvd. It will be open from 6 p.m. to 9 p.m. tonight and reopen at 8 a.m. Sunday.

Residents can get one case of water per vehicle.

There is no need for buying mass amounts of water, since it is safe in surrounding areas and plentiful in most stores.

A: Many restaurants and businesses in Lake Jackson have elected to close, but they need to follow the same restrictions as anyone else in the city. This means they could serve some food or sell items, but not use tap water for any reason, including fountain drinks.