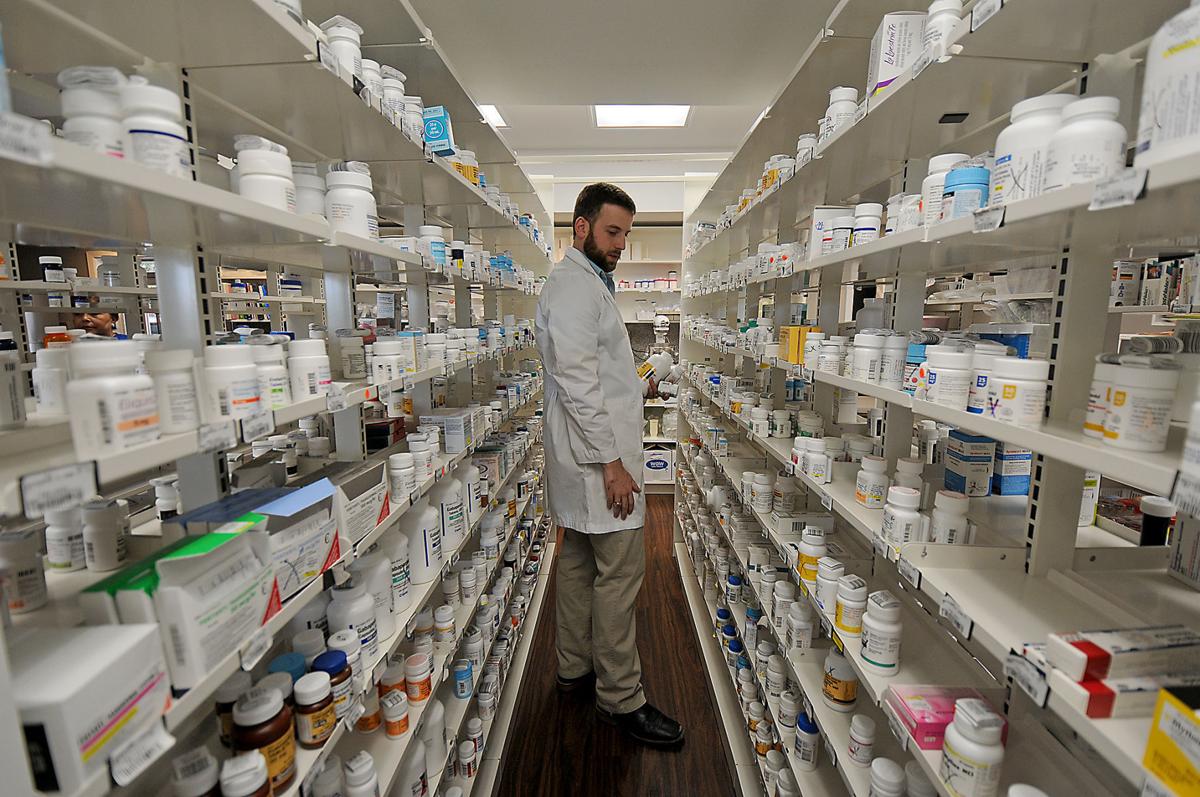 Pharmacist Ryan May reads the label on a medicine bottle as he looks for different prescription opioids Friday at Spence’s Medical Center Pharmacy in Lake Jackson. 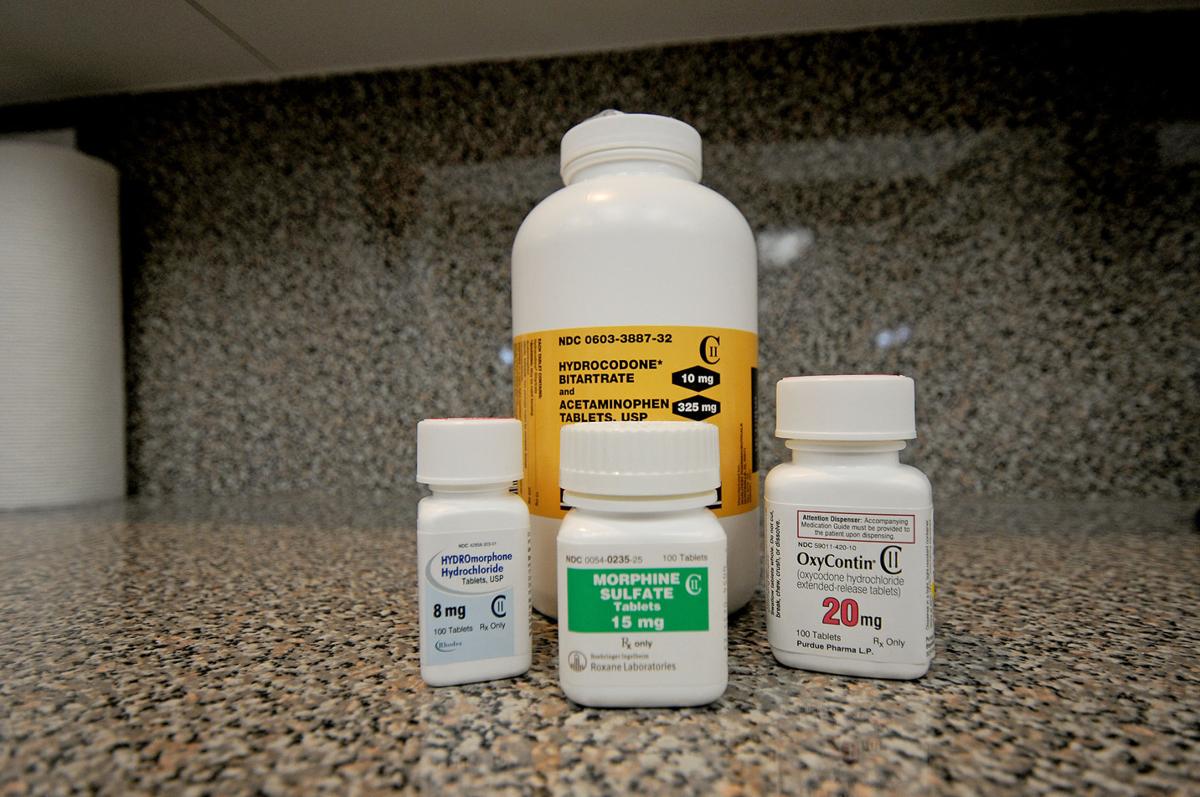 A variety of prescription opioids sit on the back counter of Spence’s Medical Center Pharmacy in Lake Jackson on Sept. 16, 2016. 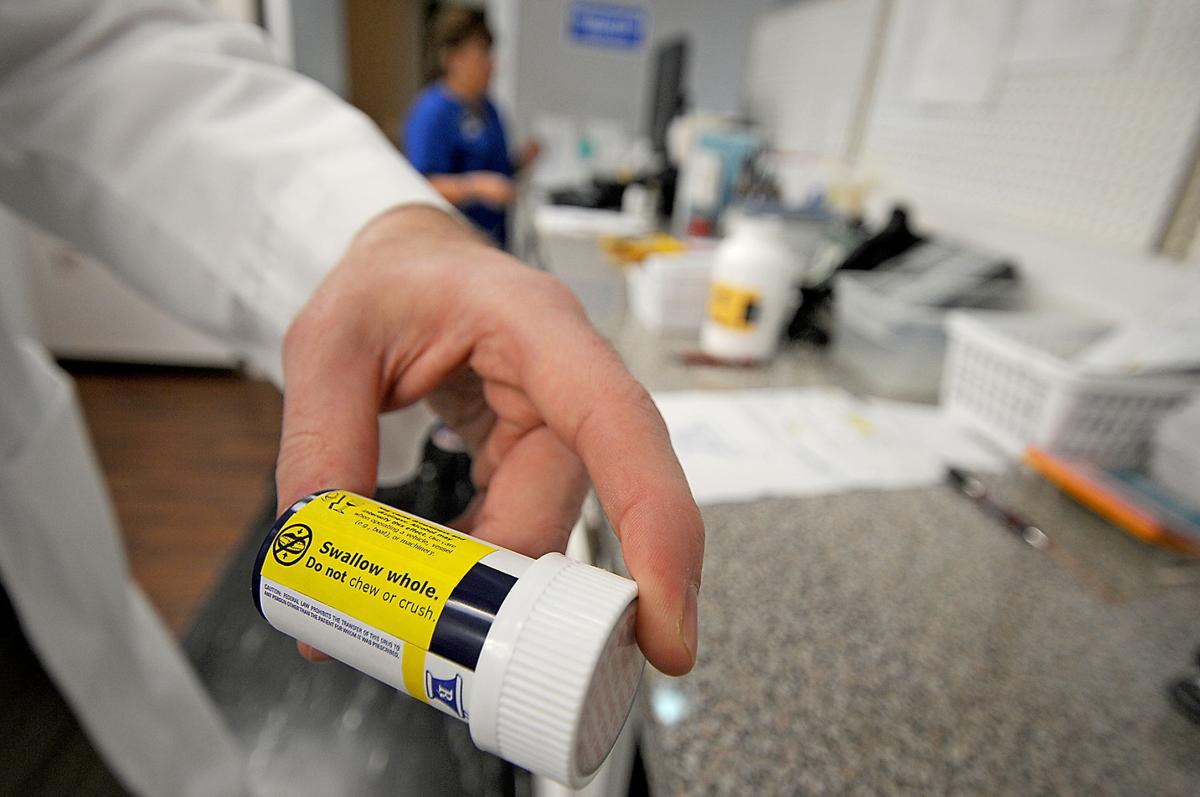 Pharmacist Ryan May shows what some of the special labels for pill bottles including prescription opioids look like Friday at Spence’s Medical Center Pharmacy in Lake Jackson. 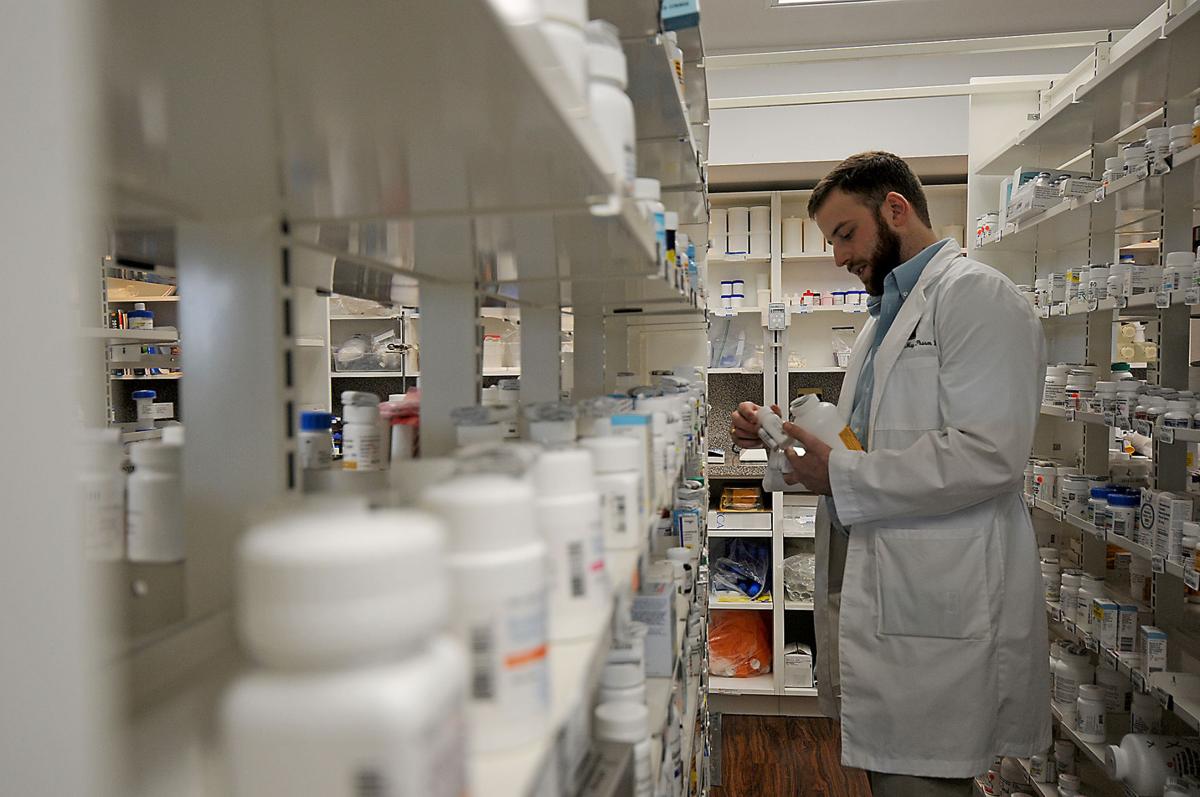 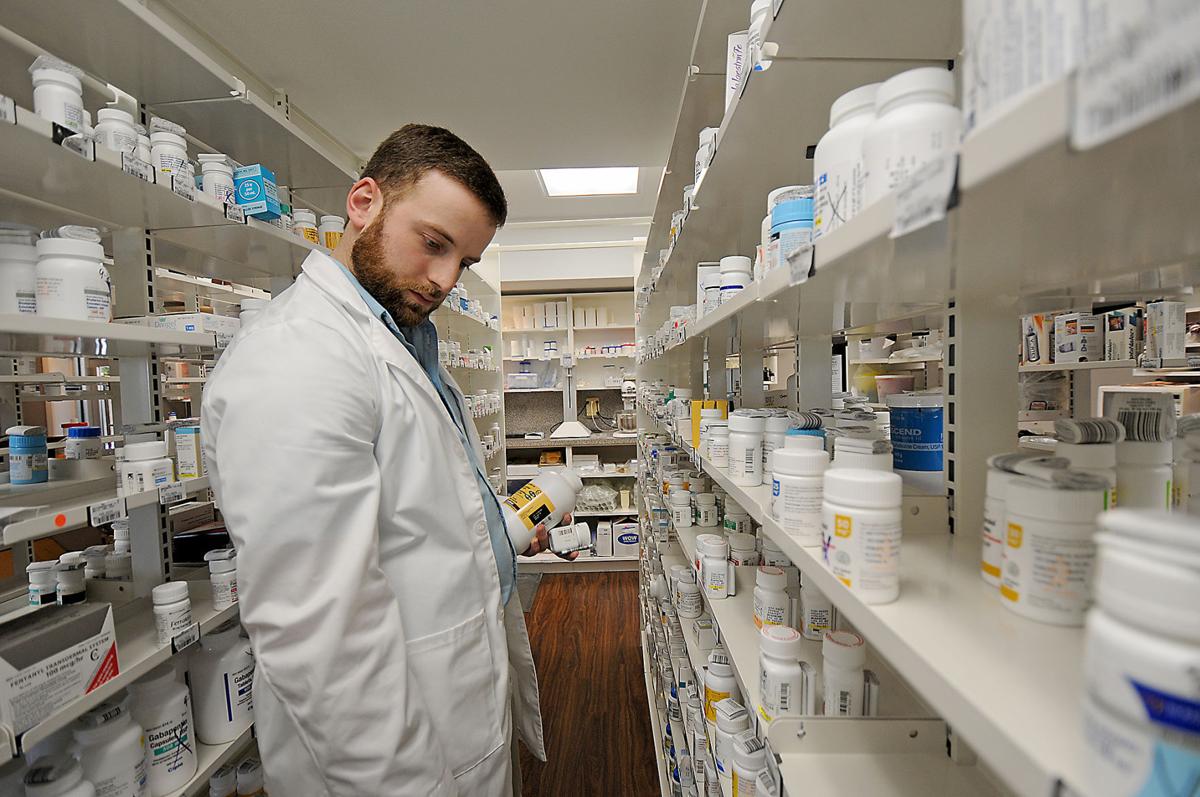 Pharmacist Ryan May reads the label on a medicine bottle as he looks for different prescription opioids Friday at Spence’s Medical Center Pharmacy in Lake Jackson.

A variety of prescription opioids sit on the back counter of Spence’s Medical Center Pharmacy in Lake Jackson on Sept. 16, 2016.

Pharmacist Ryan May shows what some of the special labels for pill bottles including prescription opioids look like Friday at Spence’s Medical Center Pharmacy in Lake Jackson.

The cries and screams of family members were all an Angleton Area Emergency Medical Corps paramedic could hear as she entered a bedroom and found a 30-year-old patient barely breathing and covered in his own vomit.

Lt. Jamie Praslicka said she remembers jumping into action and inserting a tube for the patient to breathe. Fortunately, that time, the man survived after overdosing on prescription pain pills, she said.

Two years later, when responding to the same patient, Praslicka said there was no family whimpering or sounds of concern.

Instantly, she noticed how the man’s appearance and quality of life had suffered between the two emergency calls as she walked in and saw him alone on a couch, again suffering from an overdose on prescription opioids.

“This time when we found him, it was too late,” she said.

Unlike other parts of Texas and the country, the scenario doesn’t seem to be a normal occurrence in Brazoria County, according to several local medical professionals.

“Every area of the nation has a prescription opioid problem,” said Ryan May, pharmacist in charge at Spence’s Medical Center Pharmacy in Lake Jackson. “It’s whether it’s ‘pill mill’ based, where they are given illegitimate prescriptions, or whether it’s patients that are abusing the system.”

When looking at most prescription opioid abusers found in Brazoria County, they are most likely to be people gaming the system, May said.

“It’s people trying to get refills early, getting prescriptions from multiple doctors or trying to get the same prescription filled at different pharmacies,” he said. “There are a lot of different fail-safes to kind of prevent that now, but that doesn’t mean that people don’t still try.”

“I think it’s easy to hide the epidemic in an area like Angleton because prescription medication addiction is a white-collar addiction unlike heroin or other street drugs,” he said. “People who abuse pain medications can easily be our grandmothers, fathers, brothers and mothers who often function daily with their addiction being unnoticed.”

Over the past 12 months, Albert said the Angleton Area Emergency Medical Corps responded to 92 reported overdoses or poisonings but only administered Narcan, the antidote to opioid pain medication, 12 times.

“However, it’s difficult to assess how many times we have responded to calls dispatched as non-breathers or cardiac arrest where the underlying cause was an opioid overdose,” he said. “I personally have responded to or have become aware of at least five cases where a family called for a loved one long after our intervention would have been effective, and those wouldn’t be captured in these statistics.”

The shuttering of illegal pill mills in Houston, coupled with the efforts of local law enforcement, also has kept the epidemic at bay in Brazoria County, said Joe Gardzina, CEO of the Alcohol Drug and Psychological Treatment centers, or ADAPT.

“Essentially, very shady doctors are writing prescriptions for what is called the ‘Texas Three-Step’ — Vicodin, Xanax, Soma,” Gardzina said. “The DEA’s Houston Division is one of the leaders in the country in relation to shutting down illegal pill mills, and local law enforcement has done an excellent job of identifying and addressing the issues.”

Still, many patients struggling with opioid addiction pass through the doors of the Brazos Place clinic in Freeport, Gardzina said, and even more who turned to heroin in the absence of prescription opiates.

“Addicts can no longer acquire prescription opiates like they used to, so they are going to the streets to get heroin instead,” Gardzina said. “This is clearly the unintended consequence of shutting down so many illegal pill mills.”

Opiate addicts generally have undergone detoxification before they are admitted to Brazos Place, Gardzina said, but the program provides medications such as Suboxone to help address the symptoms of detoxification for patients still experiencing withdrawals.

“Suboxone is a synthetic opioid that essentially tricks the body into behaving as if it is not experiencing detoxification,” Gardzina said. “Suboxone does not provide any of the euphoria associated with true opiates.”

Attempting to address the root of the prescription opioid problem, at least one area doctor says it rests with the patients.

“With regard to the patient’s perspective, many develop (or at least report) allergies to nearly all non-narcotic medications,” said Dr. Kevin Rittger, medical director of CHI-St. Luke’s Brazosport Emergency Department. “Often they present stating that only drug ‘X’ works for me. In these situations, the physician can either say ‘no’ or prescribe a narcotic. Physicians went to school to make others feel better. Even if the doctor starts the patient on a non-narcotic regimen, eventually, none of these medications will seem to work.”

“Opioids should not be considered first-line or routine therapy for chronic pain outside of active cancer, palliative and end-of-life care,” he said. “Given the small to moderate short-term benefits, uncertain long-term benefits and the potential for serious harms, opioids may be prescribed after expected benefits specific to the clinical context of the patient are weighed against the risks of initiating therapy.”

Chronic pain is that continuing or expected to continue longer than 3 months or past the time of normal tissue healing, he said.

Daily patient visits to the emergency department typically net about 15 to 20 people complaining from chronic pain and requesting prescription opioids as the their treatment, Rittger said.

“In one instance, a patient with a relatively minor injury may expect — if not demand — narcotic pain medication, whereas others with significant injuries may not ask for any pain medication,” he said. “Therefore, the physician must take into account the big picture with regard to the patient’s circumstance and then work with the patient and family to determine the appropriate level of pain medication or analgesia to be prescribed.”

Although some political leaders believe stronger restrictions should be placed on medical providers and the pain medications, Rittger disagrees, stating he believes doctors receive adequate training on when to prescribe the prescription opioids.

“What they don’t get sufficient training for is how to manage the expectations of society, including the patient, the family and everyone else, who may be impacted by the end of visit patient satisfaction survey,” he said.

Meanwhile, Prezas said there might be areas where the field could afford to evolve.

“There is always room for improvement as health-care innovations and chronic-pain treatments improve and change,” he said. “Texas has done an excellent job in leading those efforts.”

In July, President Barack Obama signed the Comprehensive Addiction and Recovery Act, a bill Cornyn co-sponsored. The 85-page law addresses everything from youth sports injuries to overdose prevention in a bipartisan effort to curtail the opioid abuse epidemic, according to a July 24 article in the Texas Tribune. However, the president said in a statement after signing the bill he was disappointed the law didn’t include the $920 million in funding Democrats had hoped to allocate, the article stated.

Lawmakers, including Cornyn, insist they plan to fund the legislation when it comes time to appropriate money this month. Until then, the Texas addiction treatment community must wait to see if the law will bring a flood of cash to the state’s underfunded addiction treatment programs, according to the Tribune.

The rate of drug overdose death for Texans is 9.7 per 1,000 people, compared to rates above 25 in states like New Hampshire and West Virginia. However, Texas opioid deaths have risen 80 percent in the last two decades, and per capita spending on substance abuse treatment programs is substantially below the national average. Just 8.6 percent of people with a drug problem have received treatment, compared to 14.1 percent nationally, the Tribune reported.

Throughout it all, the medical professions said it wasn’t the prescription opioids causing the problem — stating they are safe when taken properly and safely — but patients incorrectly taking or abusing the medications.

“When misused or used in conjunction with other medications or alcohol, they become dangerous because they are a silent killer,” Albert said. “The medication acts on a person’s respiratory drive, so taking too much, a victim simply falls asleep and stops breathing. There’s typically no ‘Hollywood cinematic’ reaction. In some cases, these patients fall asleep next to loved ones and slip away unnoticed being mistaken for simply sleeping.”

Opioid abuse is no laughing matter.