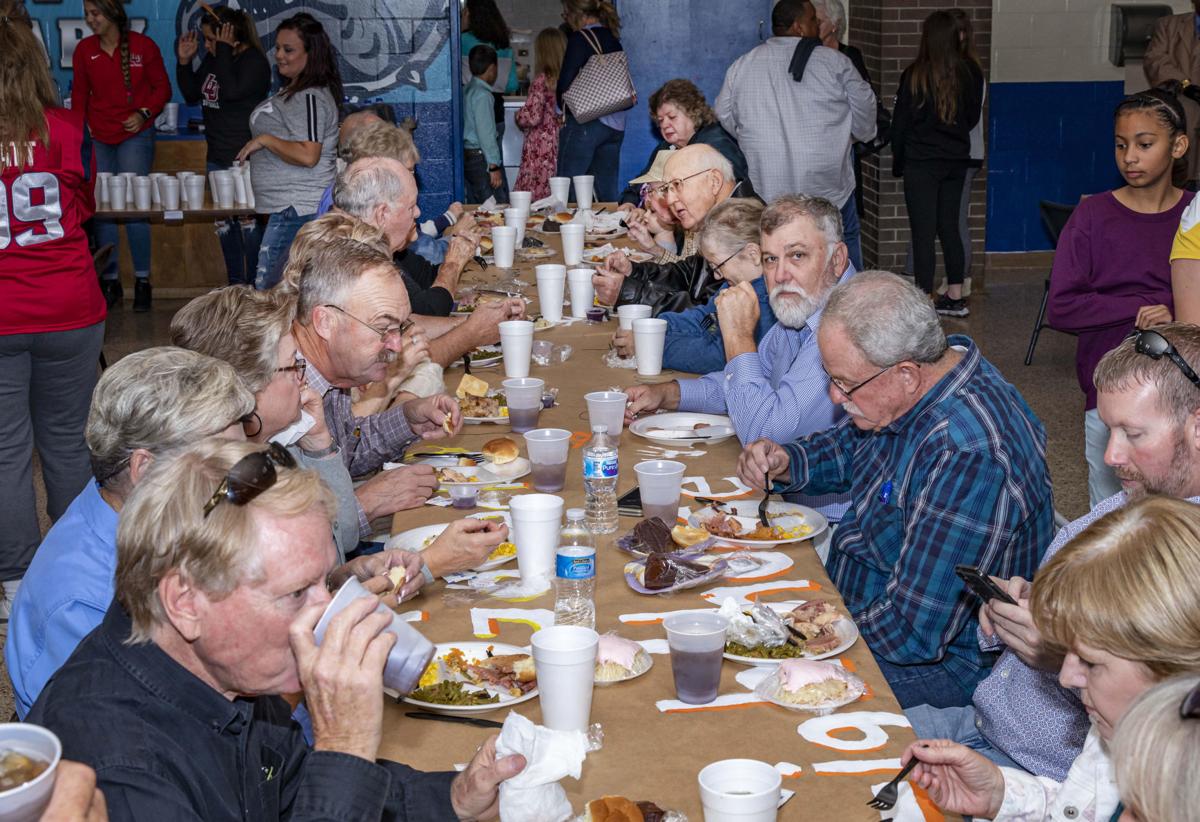 Sweeny Thanksgiving Feast guests enjoy their meals together at the Sweeny Elementary School. 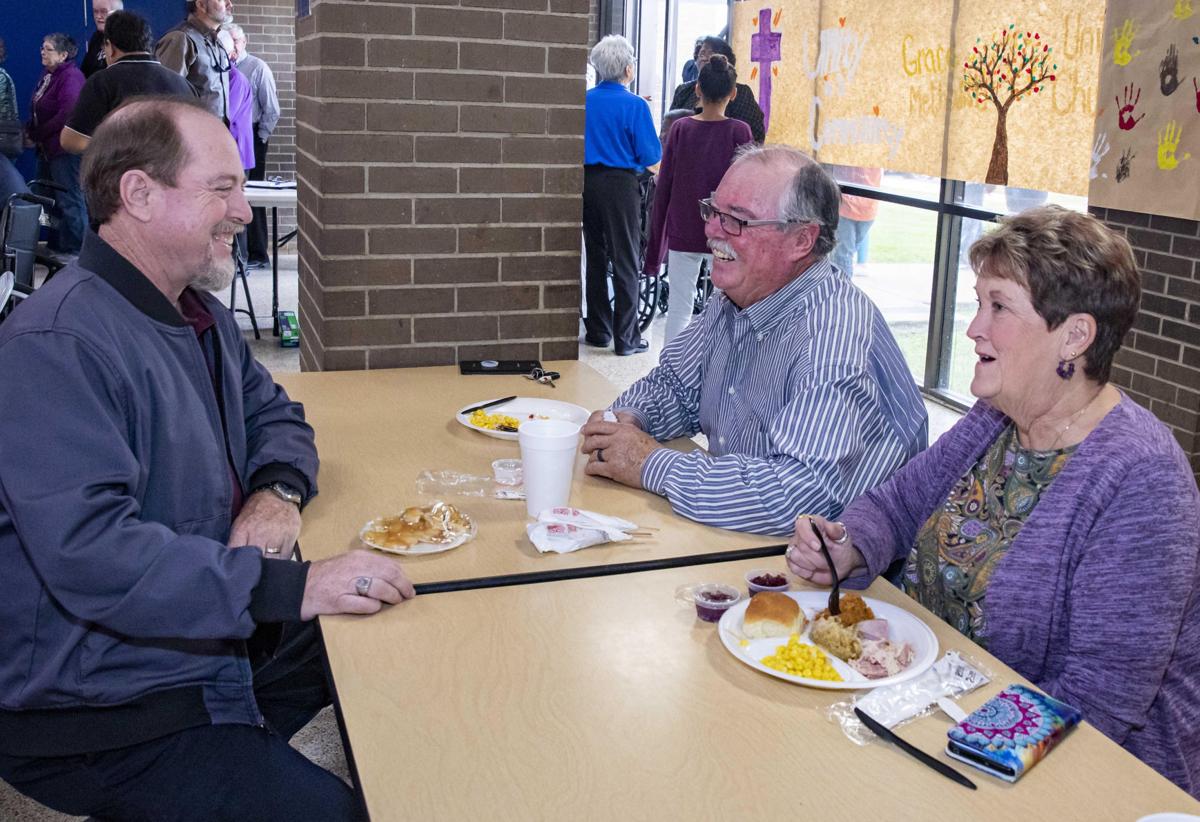 Sweeny residents Bill Fenn, Leslie Fortenberry and his wife Debra Fortenberry laugh about old memories shared between them.  Fenn and the Fortenberrys were enjoying a Thanksgiving meal sponsored by the Sweeny's local churches, residents and businesses on Sunday, November 17. 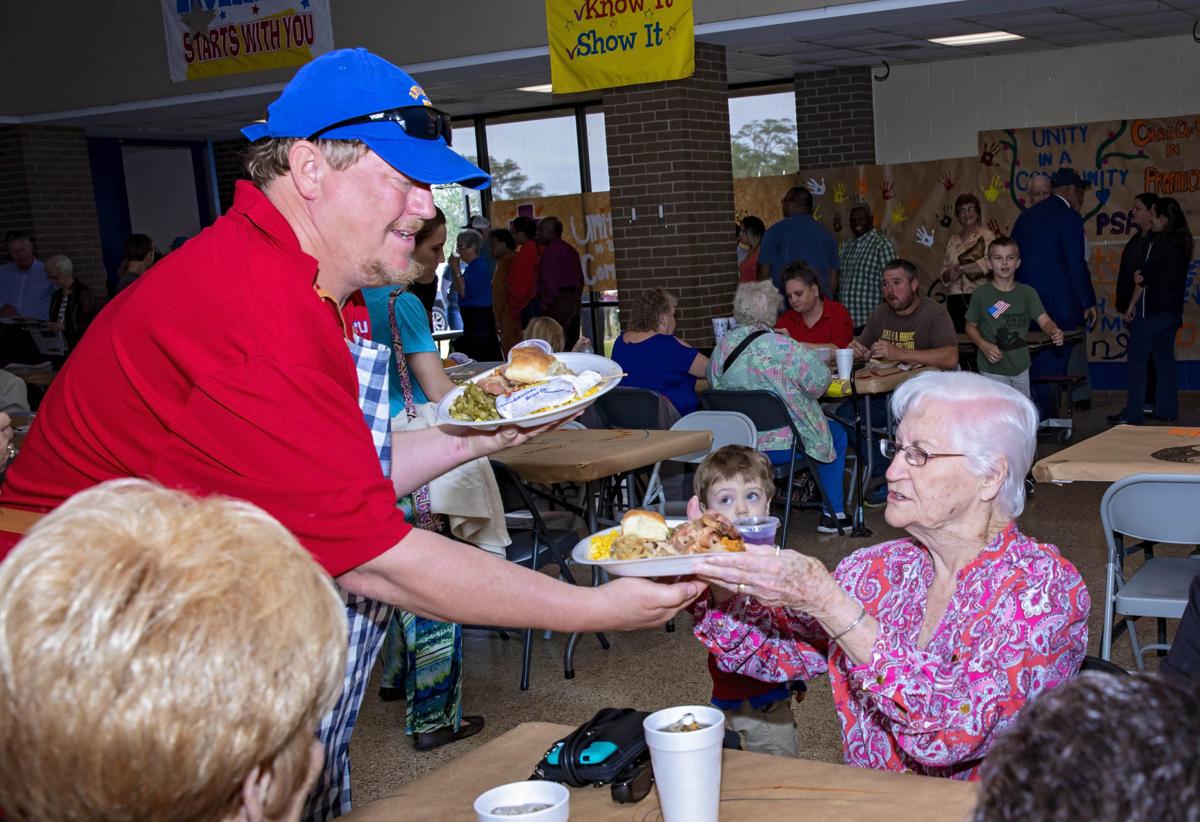 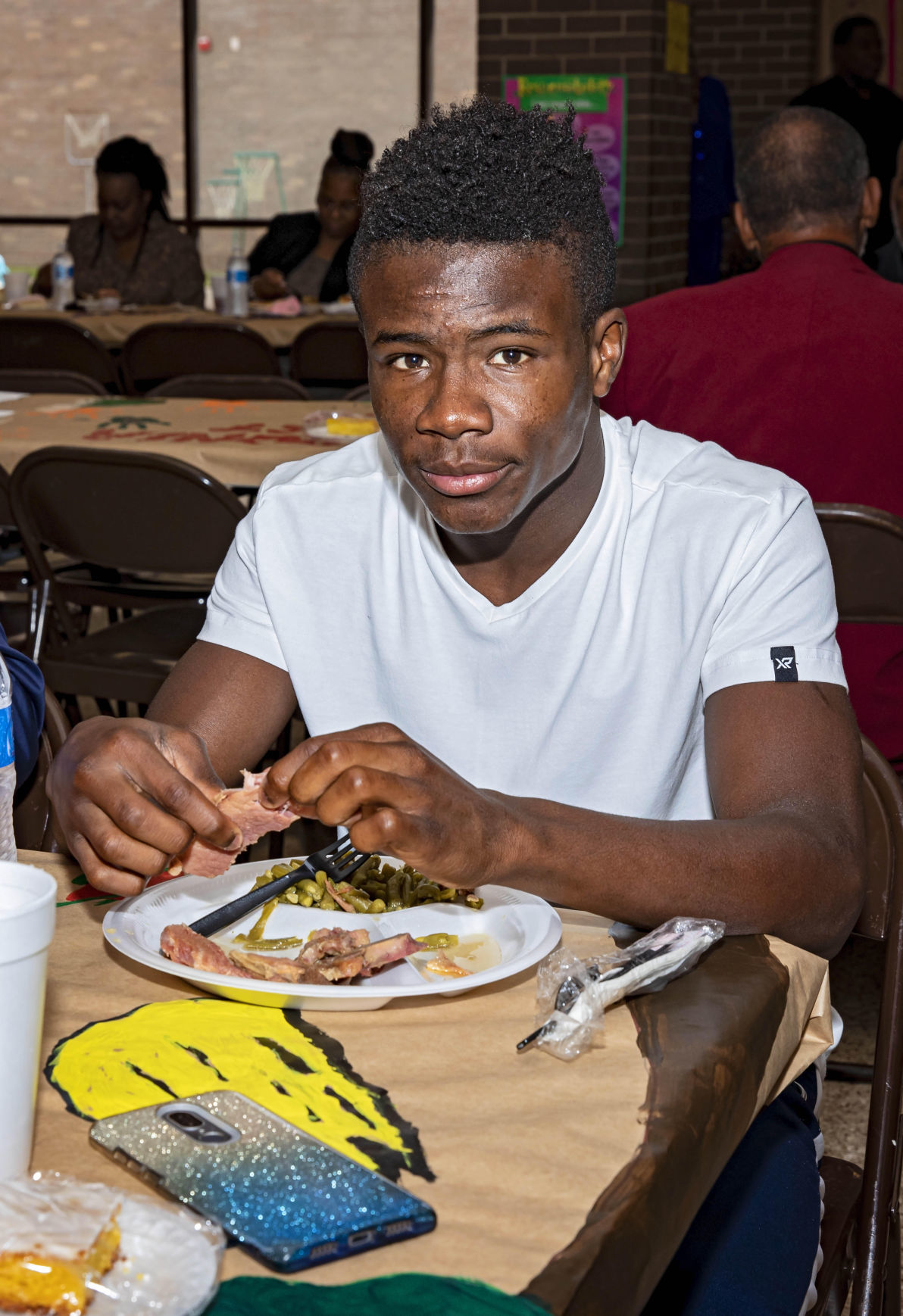 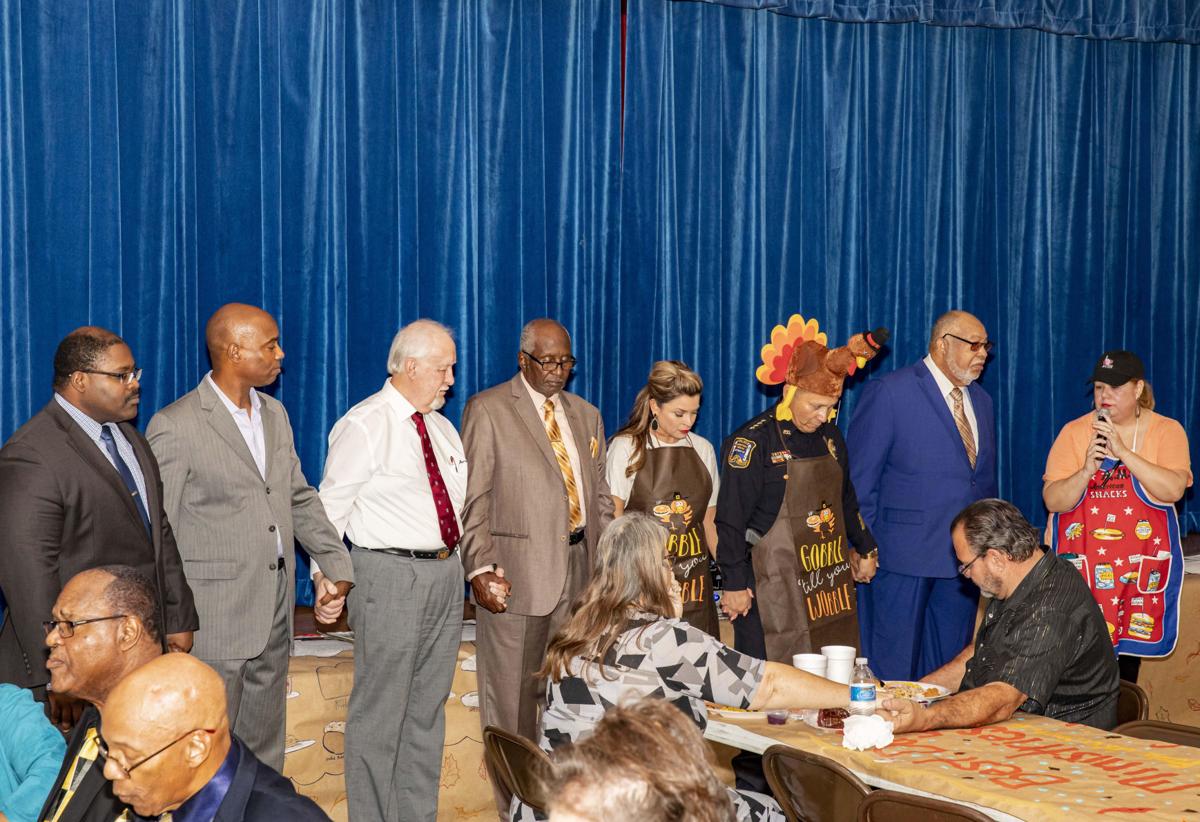 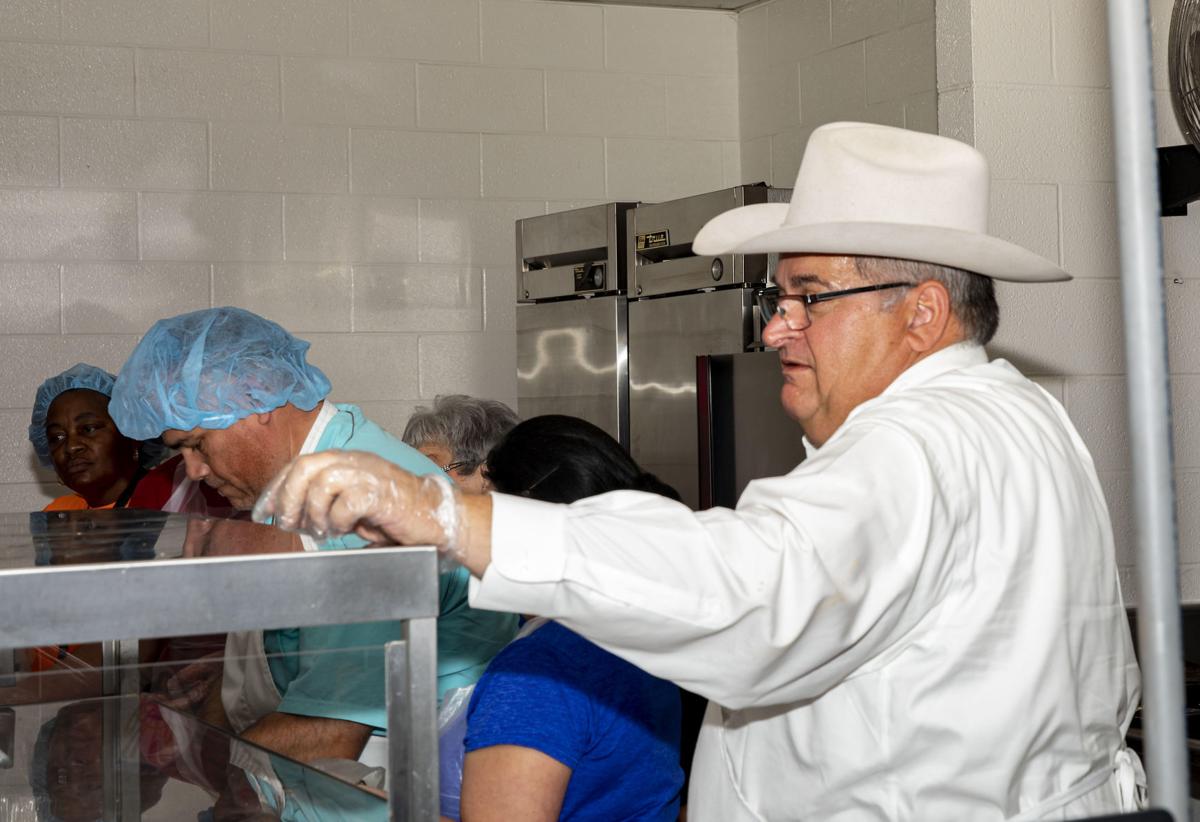 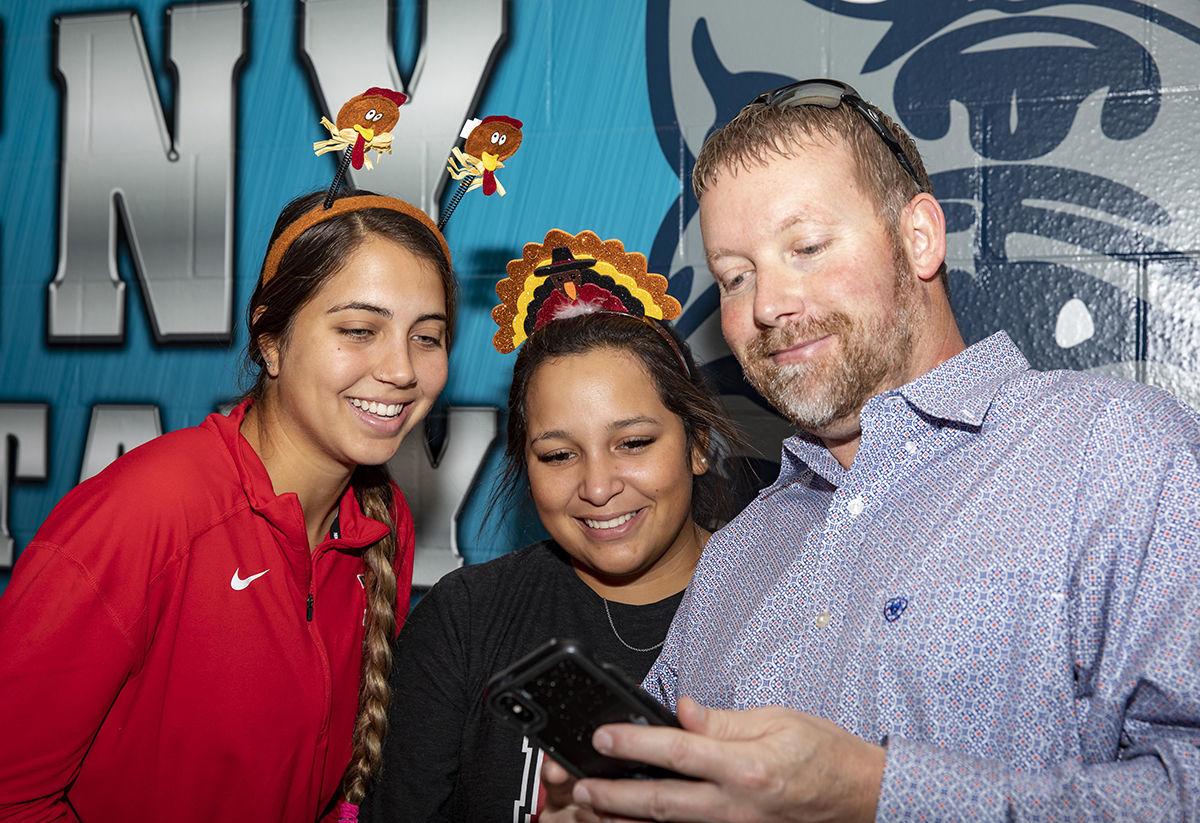 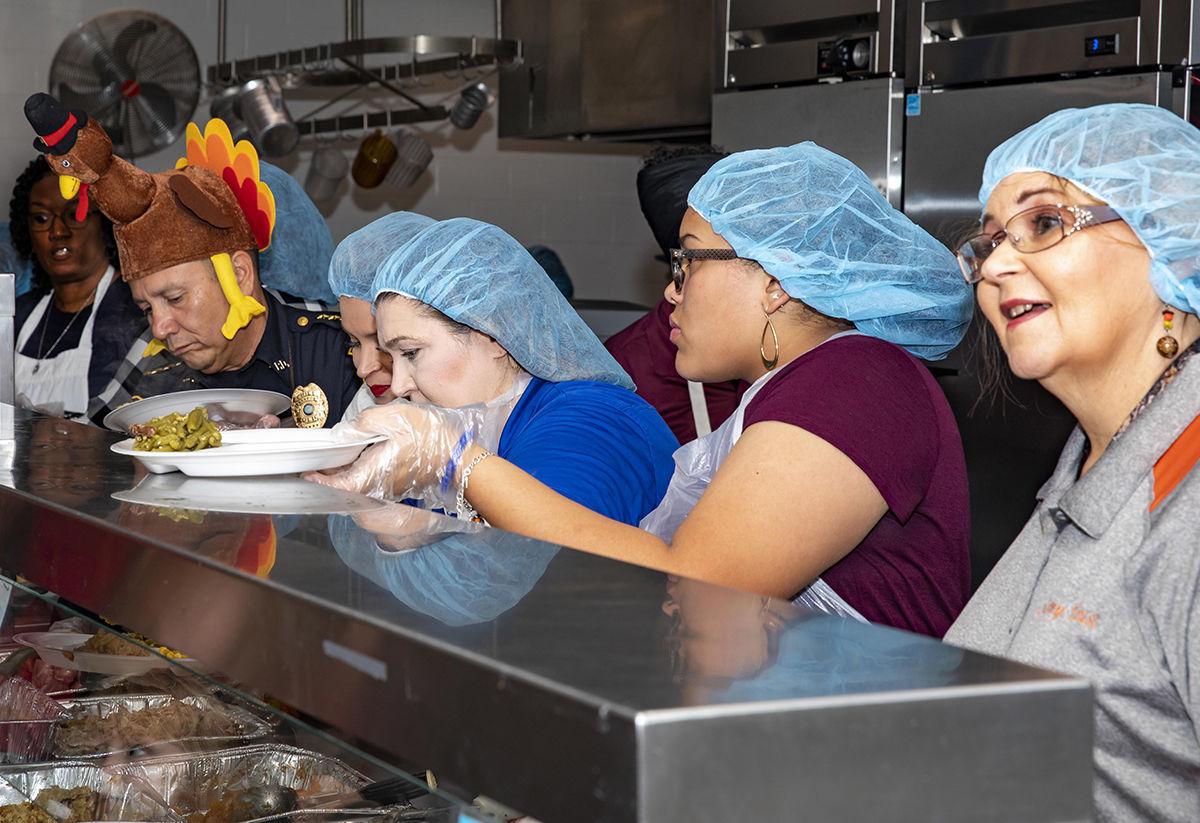 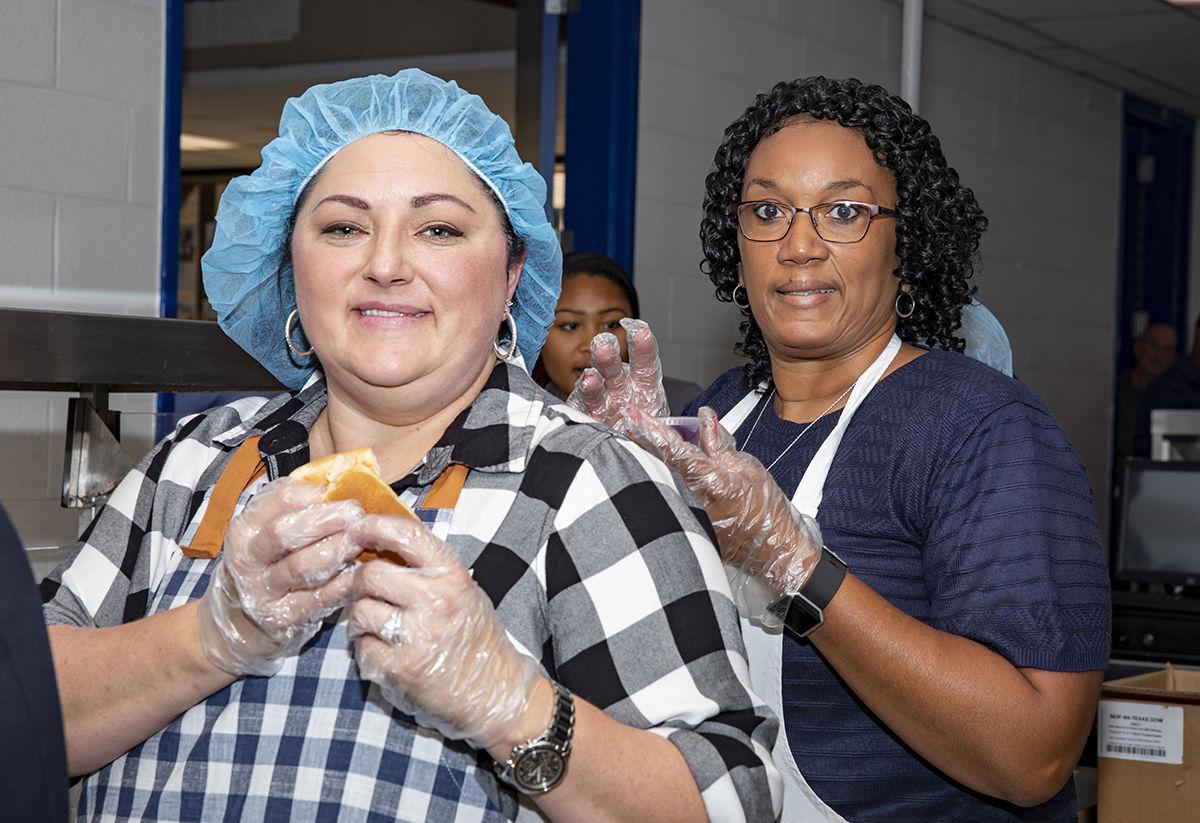 Volunteers Rhonda Seth and Alicia Wright prepare to serve rolls and cranberry sauce to guests at the Sweeny Thanksgiving feast. 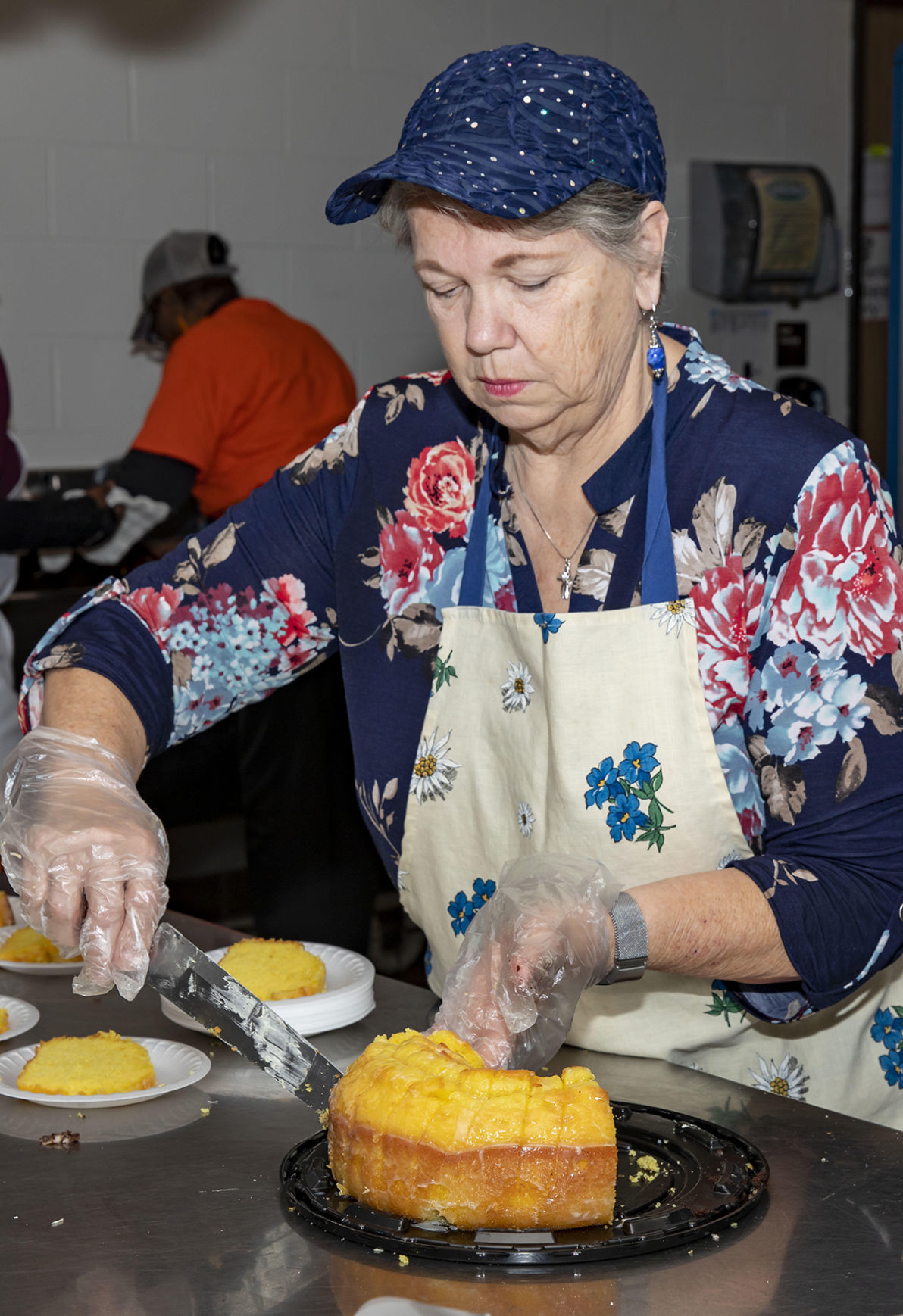 Sweeny Thanksgiving Feast guests enjoy their meals together at the Sweeny Elementary School.

Sweeny residents Bill Fenn, Leslie Fortenberry and his wife Debra Fortenberry laugh about old memories shared between them.  Fenn and the Fortenberrys were enjoying a Thanksgiving meal sponsored by the Sweeny's local churches, residents and businesses on Sunday, November 17.

Volunteers Rhonda Seth and Alicia Wright prepare to serve rolls and cranberry sauce to guests at the Sweeny Thanksgiving feast.

Two hours into the four-hour Sweeny Community Thanksgiving Feast, organizers were running low on turkey. They had 60 turkeys cooked and 1,500 servings prepared for Sunday’s event.

Organizer Agatha Sanchez admitted she was stressed about the lack of food, but said after nine years, she couldn’t be happier that the feast continues to draw more guests.

“We are proof that unity is possible in the world we’re living in right now,” Sanchez said. “I’m very proud of the small little community down here.”

For the guests who couldn’t make it, the feast organizers delivered more than 200 meals. Bianca Cunningham, a member of Gulf Coast Bible Church who lives in Sweeny, said they got lists of elderly, sick and otherwise homebound people from local churches to deliver meals to.

“Even though they can’t be here, we know their hearts are going to be here,” Cunningham said.

The event is all about the community coming together and helping each other, she said.

“It’s wonderful, it is what reminded me of my childhood … what Sweeny used to be, everyone coming together,” Cunningham said.

Sanchez could not even guess how many volunteers made the event happen. Saturday, the Sweeny Elementary School cafeteria was filled with people setting up tables and preparing for the flurry of hungry guests to come Sunday, Sanchez said.

“It was wonderful watching it all pull together,” she said.

Jones River Cookers cooked all 60 turkeys and 40 hams out of the goodness of their hearts, she said.

David Stine of the Jones River Cookers said they’re happy to help out the community. They spent about 14 hours cooking, he said.

The free meal gives some people the encouragement they need during the holiday season, Sanchez said.

“You reach the people that need to be reached,” she said.

The holidays are often hard for people, and some face additional challenges like a loss in the family or surgery, Sanchez said. Sanchez’s home was a complete loss in a July fire. No matter the circumstance, she said people can make it through.

“They walk in this room and see that there are people out here to encourage you,” Sanchez said.

Hard work and a lot of love makes the event successful, she said.

Sandra Hanks has lived near Sweeny her whole life, she said.

“It is really nice,” Sandra Hanks said. “It’s nice for people to come out and get together to eat.”

Hanks said she sees more unity in the community now than she did growing up, and enjoys the interaction people have with each other.

Her daughter-in-law, Jennifer Hanks, married into the family about a month ago. Jennifer Hanks is from Rosenberg, she said, but is moving to Freeport with her husband, Giovinny, and enjoys Sweeny, the community her “hubby” grew up in.

“I absolutely love it,” Jennifer Hanks said. “Everybody knows everybody.”

She enjoyed talking and getting to know people at the event and especially the “laid-back, country attitude,” she said.