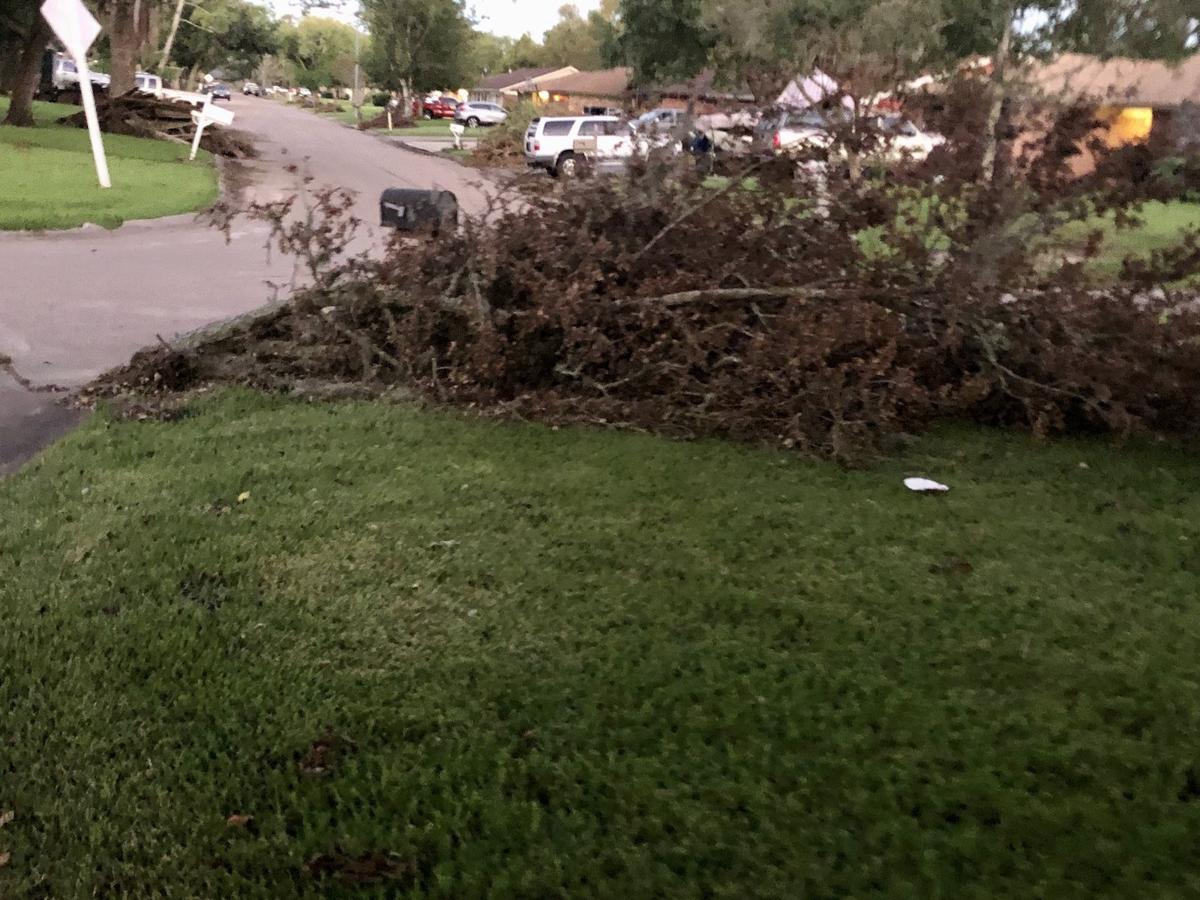 Vegetative debris is placed next to the curb in the 500 block of North Yaupon Street in Richwood, ready to be picked up. 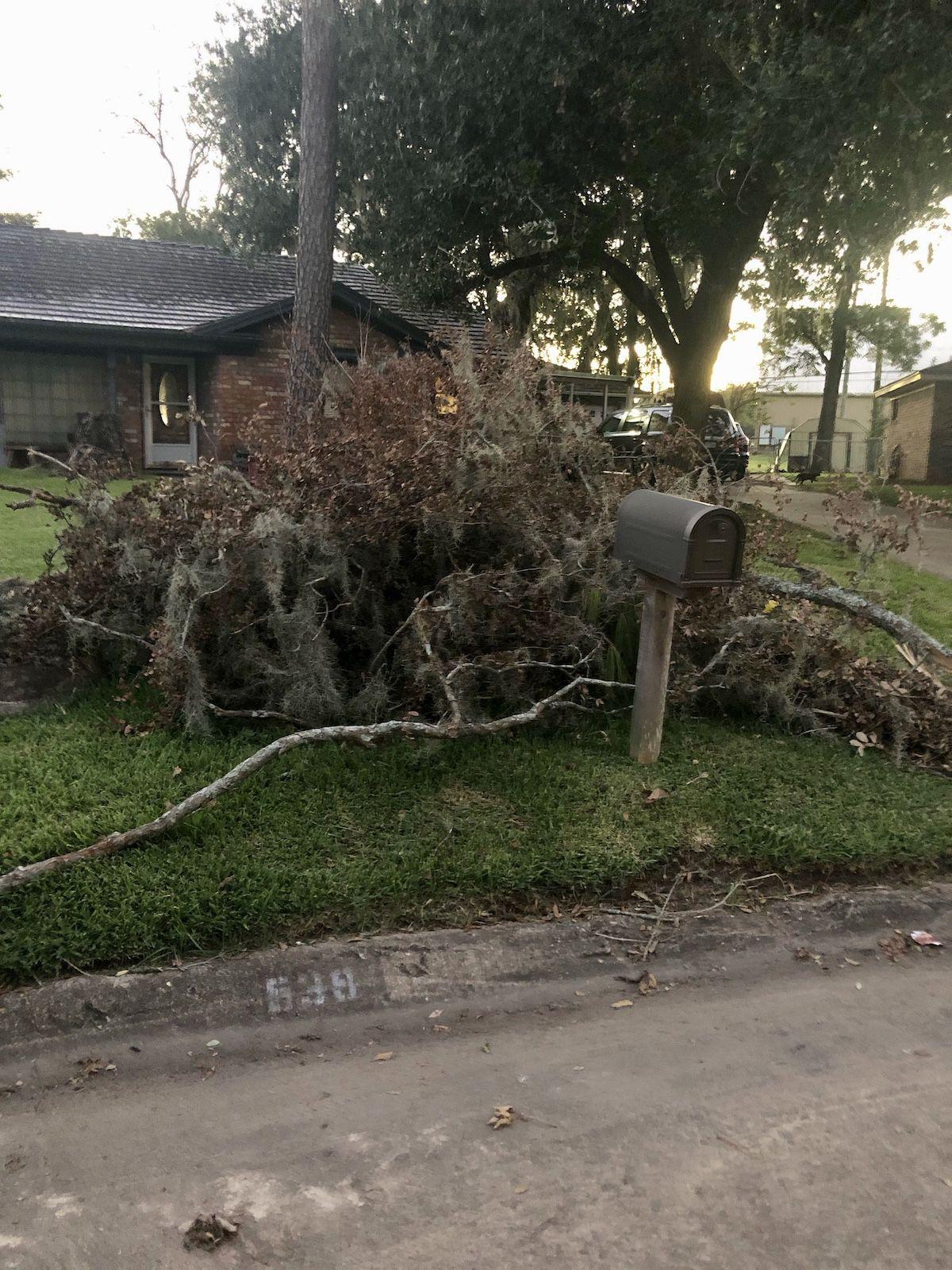 Vegetative debris is piled next to the curb in the 500 block of North Yaupon Street in Richwood.

Vegetative debris is placed next to the curb in the 500 block of North Yaupon Street in Richwood, ready to be picked up.

Vegetative debris is piled next to the curb in the 500 block of North Yaupon Street in Richwood.

Brazoria County’s road and bridge crew did a “great” job of getting roads open immediately after Hurricane Nicholas, and the county’s contractor is ready to begin mobilizing to pick up debris, County Engineer Matt Hanks said.

“We’ve got a lot of debris in the west and south areas of the county; the contractor estimates somewhere between 30,000 and 50,000 cubic yards,” he said.

The plan is to start picking up vegetative debris Monday, he said.

Residents just have to get their debris to the right of way on county-maintained roads for the contractor to stop by and pick it up, Hanks said. It’s important residents try not to block drainage, as during this time of year there could be a big rain shower at any point, he said.

“Not in bags — just drag it out and we will pick up green organic debris only,” Brazoria County Judge Matt Sebesta said.

The contractor will start where debris is the most dense, in the south and the west parts of Brazoria County, but there will be multiple crews in multiple areas at a time, Hanks said. Starting Monday, the estimate is it will take two to three weeks to pick up everything, he said.

“It is my understanding neither the state nor us hit the threshold (for federal reimbursement),” Hanks said.

While the county mobilizes to gather debris where needed, municipalities are preparing to address their debris removal needs within city limits.

Citywide clearing began Thursday and is expected to take some time.

“They will probably be here anticipating anywhere from two or three weeks,” Mayor Jason Perez said. “They will do an initial pass through the city and they will do a second pass.”

The city is encouraging residents to have vegetative debris to the curb by Monday, Perez said.

“That is the drop-dead date to put items out to the curb,” he said. “They have the weekend to finish up any last-minute items.”

Residents can refer to a post on the city’s Facebook page for directions on how to sort the debris.

“Separate brush from construction debris, i.e. shingles, and fencing,” to the post states. “Move debris to the curb without blocking the roadway, fire hydrants and mailboxes. Debris should be placed on the ground, not on a structure or under a tree.”

Crews are also going through the city with a street sweeper, doing the cosmetic clean-up to the roadways like the dirt and mud, Perez said.

“They started that yesterday,” Perez said. “We’re asking the residents to be patient. It’s going to take a few days to get through the entire city, maybe a week or so, if not longer.”

The city plans to get Crowder Gulf to start with debris pickup next week, Mayor Roger Shugart said.

“We will call them in and start Tuesday, and it will probably run until they get the town cleaned up,” he said. “We may call them to come back a second time if it’s necessary.”

To get ready for the pickup, Shugart said people need to put their debris out by the road. Vegetative debris should not be put into plastic bags and must be free of other materials such as shingles and fencing, he said.

“If they don’t pick it up, people will be responsible for getting it hauled away or paying for it,” Shugart said. “They carry it out to a site and grind it so they can’t have lumber and plastic and trash and all that mixed in with it. It has to be a clean brush.”

After the pickup, the city will survey the town in a week or so to see if people still have debris to be removed. If needed, another pickup may be done.

“It depends on if we can justify hiring those guys,” Shugart said. “Because it’s pretty expensive to get them back in here. We’re hoping they will get it all out this weekend and be ready for them to pick it up on Tuesday.”

Brazoria is paying for the pickup through its emergency storm clean-up fund.

“(We have) never have had to use it, but now with this happening,” Shugart said. “We had $300,000 in it and it’s probably going to take about $200,000 to clean up. In the future we’re going to have to look for ways to refurbish that fund. We’re very fortunate this was a mild storm.”

Clute’s debris removal contractor will collect green waste Monday through Friday next week, according to an email from City Manager CJ Snipes.

After Oct. 4, waste and debris will be collected as additional heavy waste and subject to a collection fee.

Residents should separate waste into six categories: electronics; large appliances; hazardous waste such as batteries and cleaning supplies; vegetative debris; construction debris, such as drywall and lumber; and household garbage.

Debris should be placed curbside without blocking the roadway. Green vegetative debris cannot be mixed with other debris.

There is about 5 cubic yards of storm debris to be collected, which will be addressed by a disaster response division the city is working with, Mayor Melinda Strong said.

“Council will decide whether to chip up the debris or haul the debris to a landfill at a future council meeting,” Strong said. “The cost for disposing of the debris at a landfill would be around $150,200. Once council decides as to how to dispose of the debris in a cost-effective and timely manner, the citizens of Danbury will be notified of the debris pick-up dates.”

City Manager Tim Kelty is waiting to find out whether an emergency debris pickup contractor’s permit is approved by the Texas Commission on Environmental Quality, and if it is, collection will begin Sunday, he said.

“Freeport is asking people to have everything curbside by Oct. 4,” he said.

“Our contractor started today and they will be working every day,” City Manager Modesto Mundo said Thursday. “We have them focused on brush. We’ll come back with our crews and pick up the fencing and that sort of debris later. Right now we have them solely focused on brush because you can’t mix them. If we had them gathering both, it would slow them down on picking up the brush, which is the primary thing we need them to work on.

To help crews be as efficient as possible, officials are asking residents to keep their household debris, such as damaged fencing, in one pile and green waste, such as brush, in another pile. Bagged leaves should be kept separate from the brush, Mundo said, because it cannot be disposed of with the rest of the brush if it is in bags.

City workers so far have been focused on keeping ditches clear of storm debris, he said.

“We’ve put a lot of our large trash crews on removing brush from drainage ways,” Mundo said. “Our staff is focusing on getting tree debris from drainage ways and our contractor is focused on picking up brush. The fence material and things like that are not our major priority right now, we’re more focused on the brush and clearing sidewalks, direct routes to schools, those sorts of things.”

Brush cleanup crews are expected to be in Lake Jackson for at least three weeks as they collect the more than 40,000 cubic yards of debris.

“It could be longer, but they came in and assessed the city and said they could get this amount picked up in about three weeks,” Mundo said. “They divided the city into quadrants and have a crew working in each of the four portions. They’re going to be working every day, including Saturdays and Sundays, to get that done.”

Mundo is expecting to get a good gauge on the progress by the end of the weekend to determine exactly how long the cleanup will take.

Residents are asked to put out storm-related debris only, which should be mostly trees and branches.

“We are noticing some household items in the debris piles that are not storm-related,” the post states. “This will not be allowed and could cause your home to be skipped.”

A second round of pickup will follow about a week after the first, the post states. The exact date and time will be shared once assessments are complete, but residents are asked to have as much of their debris as possible set out for the first pickup.

The village was perhaps the hardest-hit community and there was no shortage of debris on Bluewater Highway and local roads in the hurricane’s aftermath. Village crews quickly scooped up the debris from the main roads in the days after the storm.

“We are making good headway,” Mayor Gregg Bisso said. “We will be activating our debris removal contract next week to get the remaining debris off the island.”