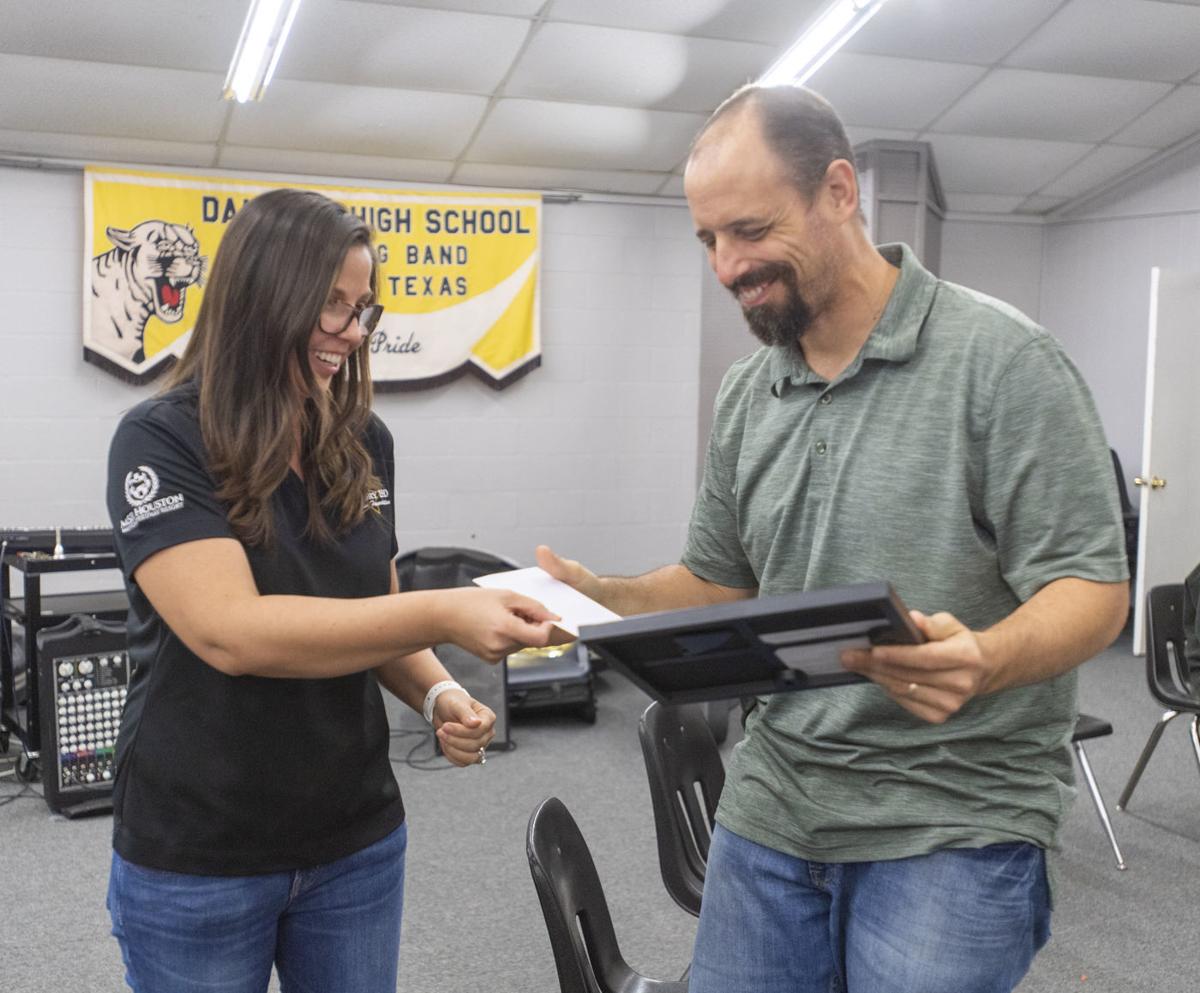 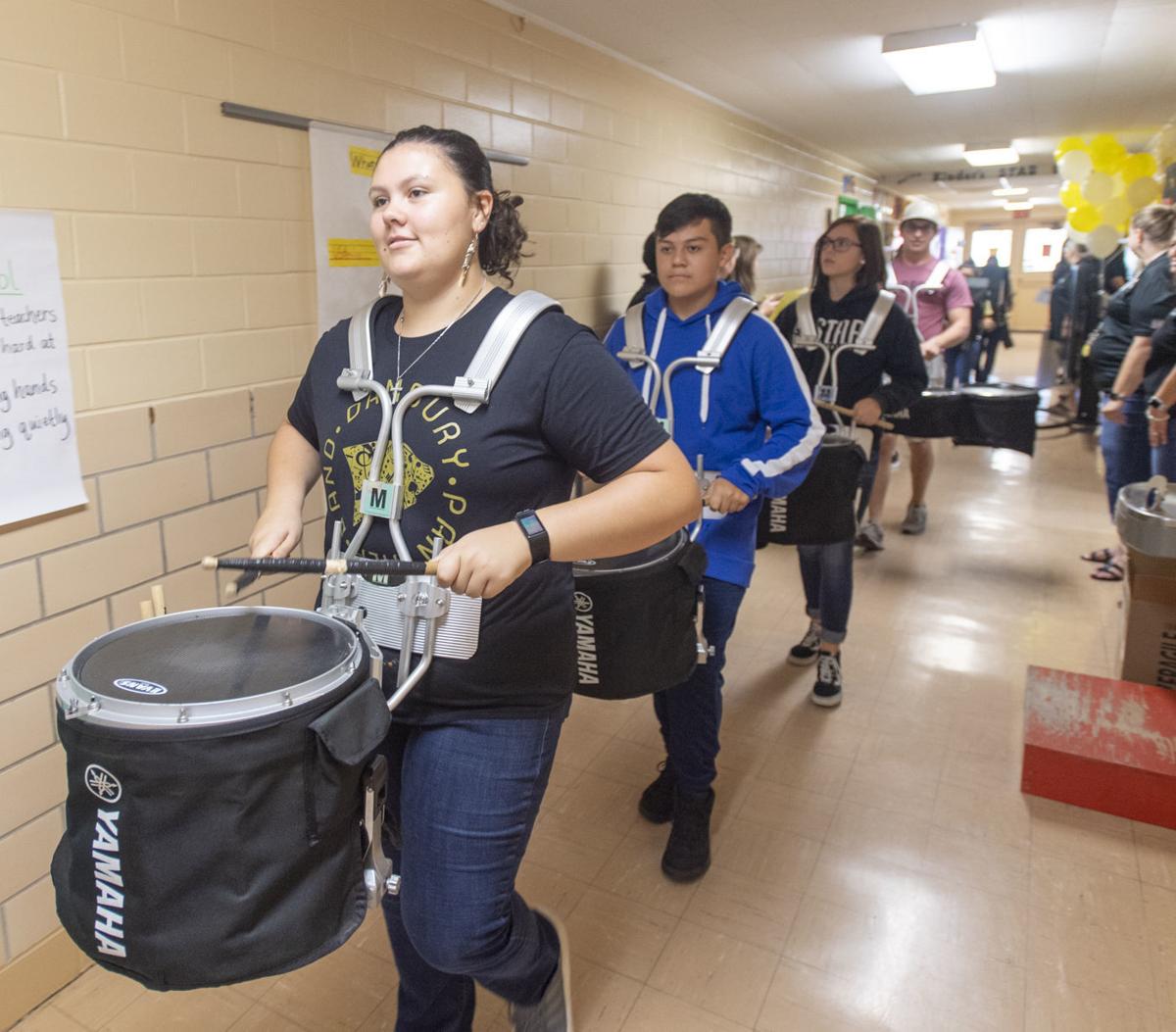 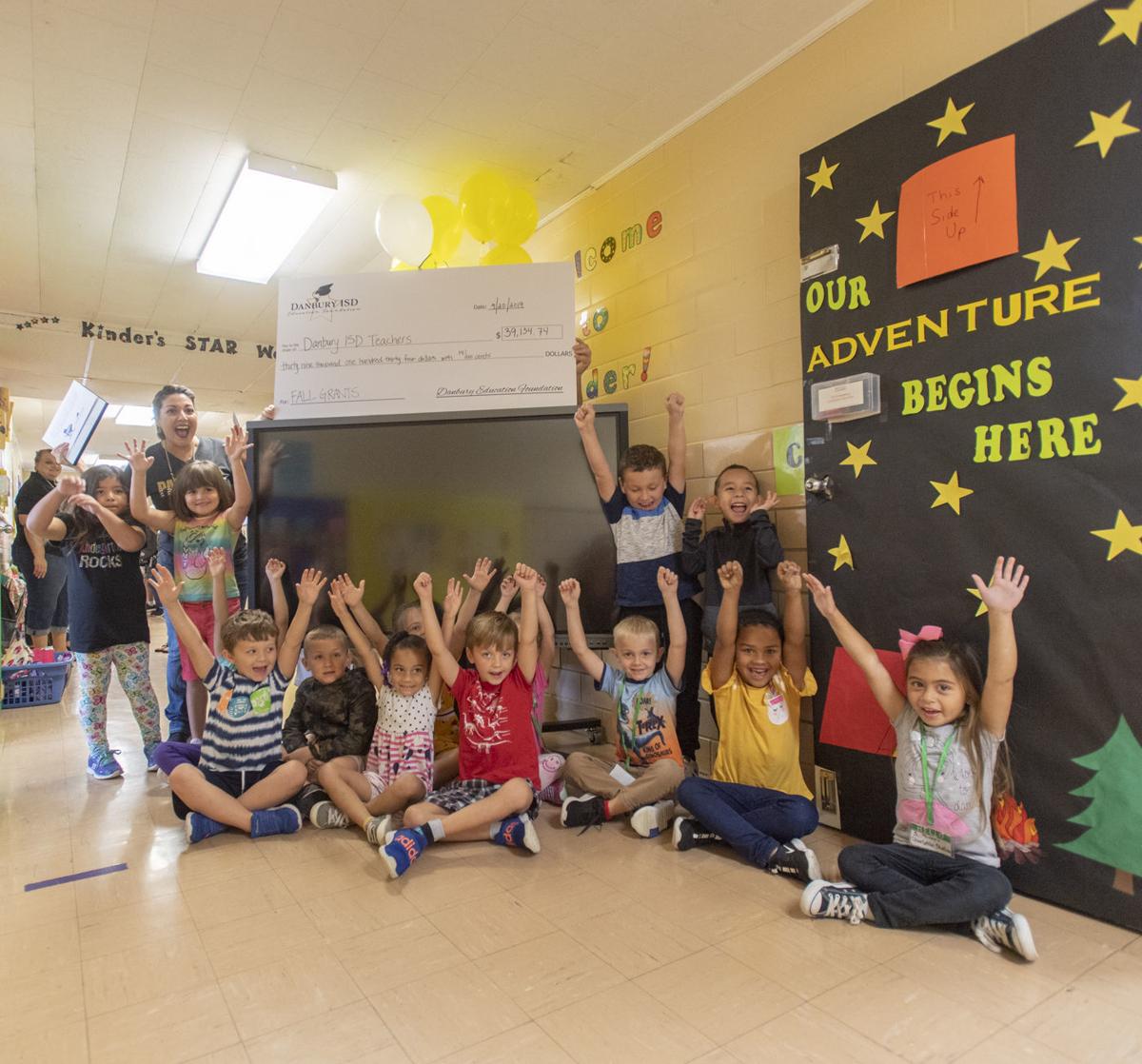 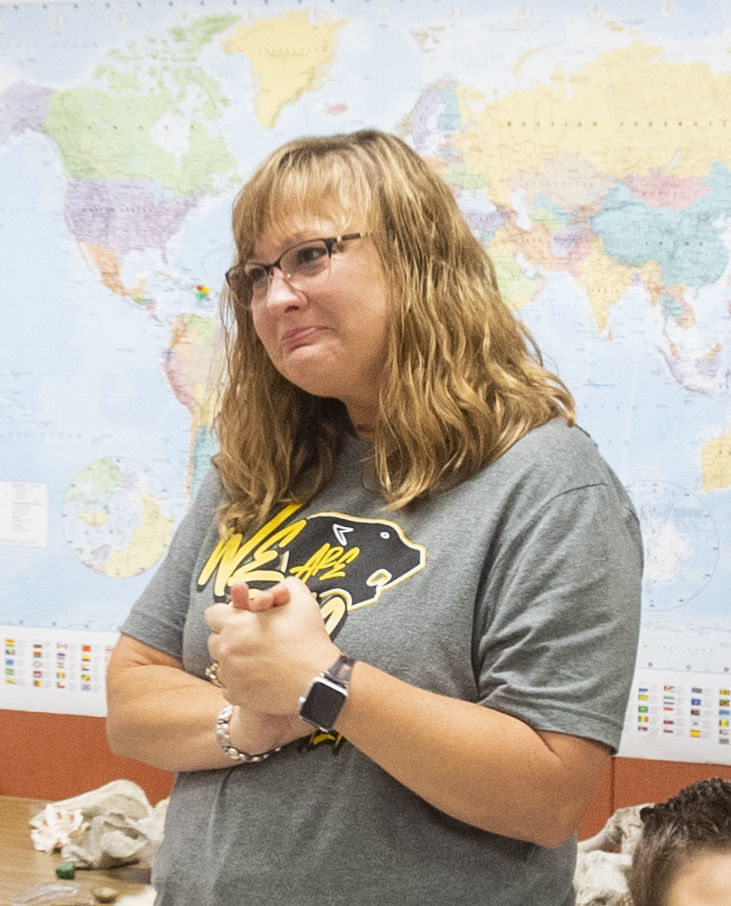 Third-grade teacher Alicia Neubauer won a $3,571.48 grant from the Danbury ISD Education Foundation. Neubauer plans to use the money to purchase Chromebooks for her students. 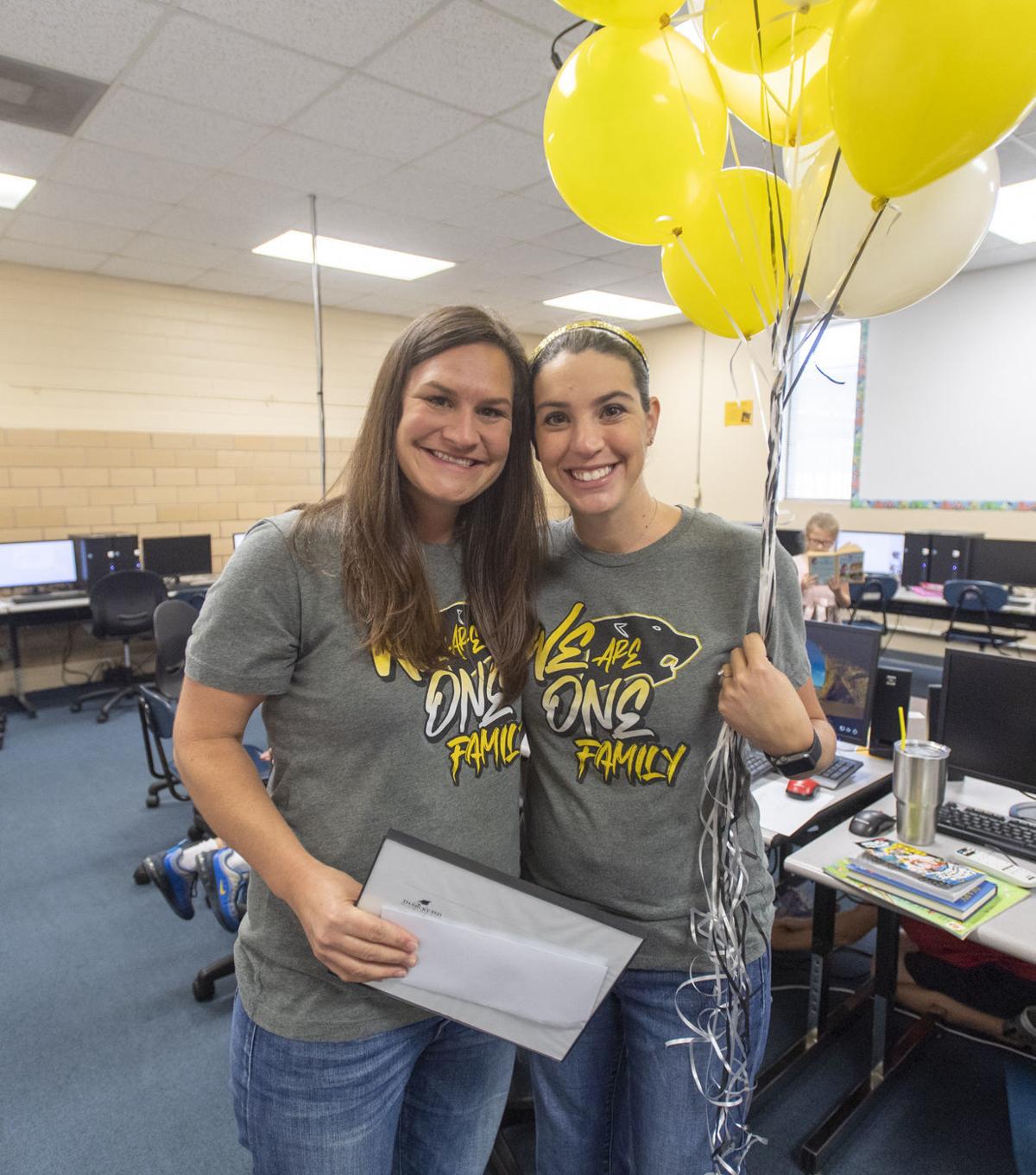 Third-grade teacher Brook Auer, left, was presented a a grant by her sister-in-law, Ashley Bulanek, on Friday at Danbury Elementary School. Auer’s $1,086.75 grant will be used for interactive math stemscopes.

Third-grade teacher Alicia Neubauer won a $3,571.48 grant from the Danbury ISD Education Foundation. Neubauer plans to use the money to purchase Chromebooks for her students.

Third-grade teacher Brook Auer, left, was presented a a grant by her sister-in-law, Ashley Bulanek, on Friday at Danbury Elementary School. Auer’s $1,086.75 grant will be used for interactive math stemscopes.

With a bundle of balloons, a drum line and an oversized check, members of the Danbury Education Foundation and school staff made their way down the halls of the Danbury elementary and high school to surprise teachers with generous grants Friday morning.

The education foundation is a nonprofit that was founded in 2014 and began gifting grants in 2015. Since then, they have awarded over $134,000 to enhance the education for Danbury students, not including the $39,134 granted Friday, according to the foundation’s website.

Each year the monetary value of the grants has climbed. In 2015, the foundation gave away almost $5,000, and this year it has given away over $80,000, Danbury Education Foundation President Celia Lewis said.

The foundation is normally only able to present grants once a year in the spring. This year the organization was able to also issue grants in the fall. This was made possible by generous donations made by Frio, Texas Crown Club and H-E-B Tournament of Champions, Lewis said.

Third-grade teacher Alicia Neubauer was one of the 11 teachers who received a grant. When foundation members entered her classroom and announced she had won, Neubauer’s eyes became glossy.

“I almost started crying. I am just so excited,” Neubauer said.

She said she plans to invest in more Chromebooks for her classroom with the money she received Friday. Her classroom uses computers to perform research, develop typing skills and learn the curriculum. Just this week, her students used Chromebooks to track tropical storm Imelda, Neubauer said.

“Over the last four years, I have been blessed by winning grants from Danbury’s Education Foundation for the grand total of $15,723.48. Thank you to everyone who supports this amazing foundation,” Neubauer said.

Another third-grade teacher was surprised to learn she had won a grant as well. That was not the only surprise she received, foundation member Ashley Bulanek said.

Bulanek is grant winner Brook Auer’s sister-in-law. Bulanek is on maternity leave but took the time to help surprise Auer with the grant. Auer did not see it coming, Bulanek said.

These grants are beneficial to the district, especially with technological advances, Bulanek said.

“It’s amazing. We get a lot of our technology through the foundation and through the grants, and seeing what the kids can do with the Chromebooks, iPads and smart TVs is really cool,” Bulanek said.

The Danbury Education Foundation has events coming up that will help it their spring grants for 2020. These events include a silly sock golf tournament and a fun run event in December, Lewis said.