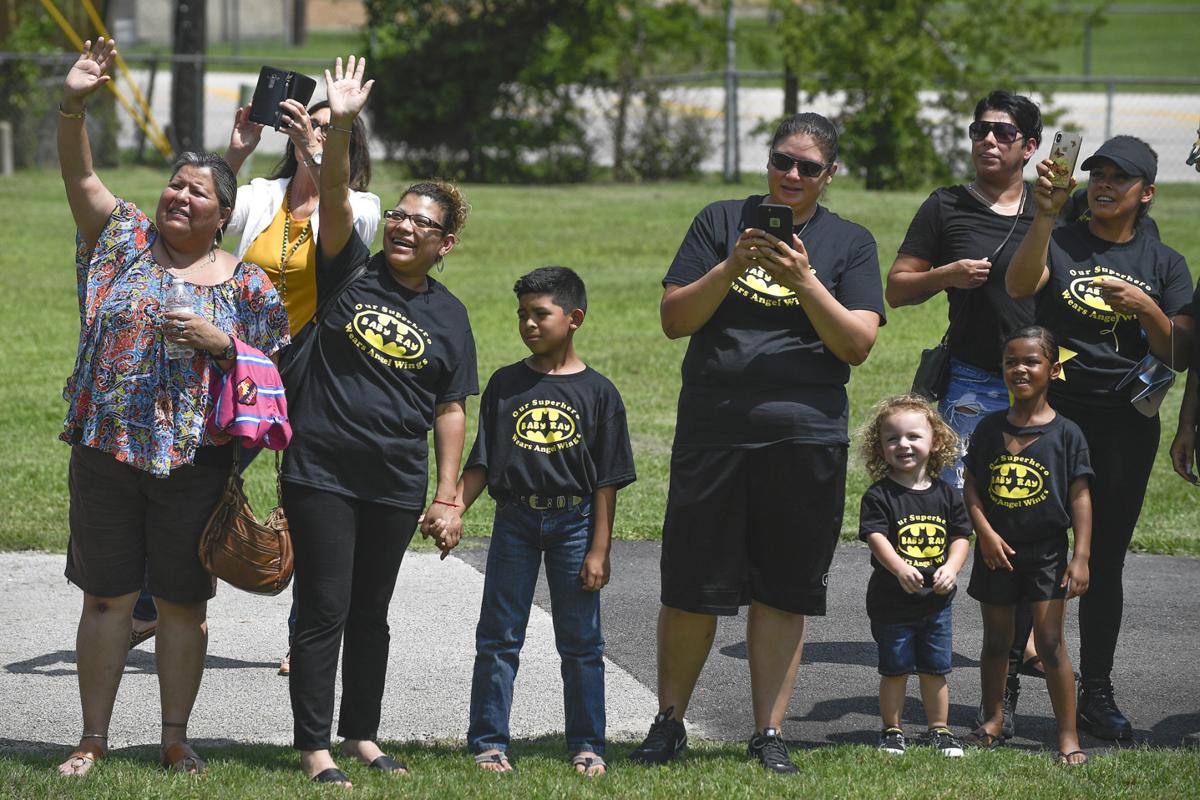 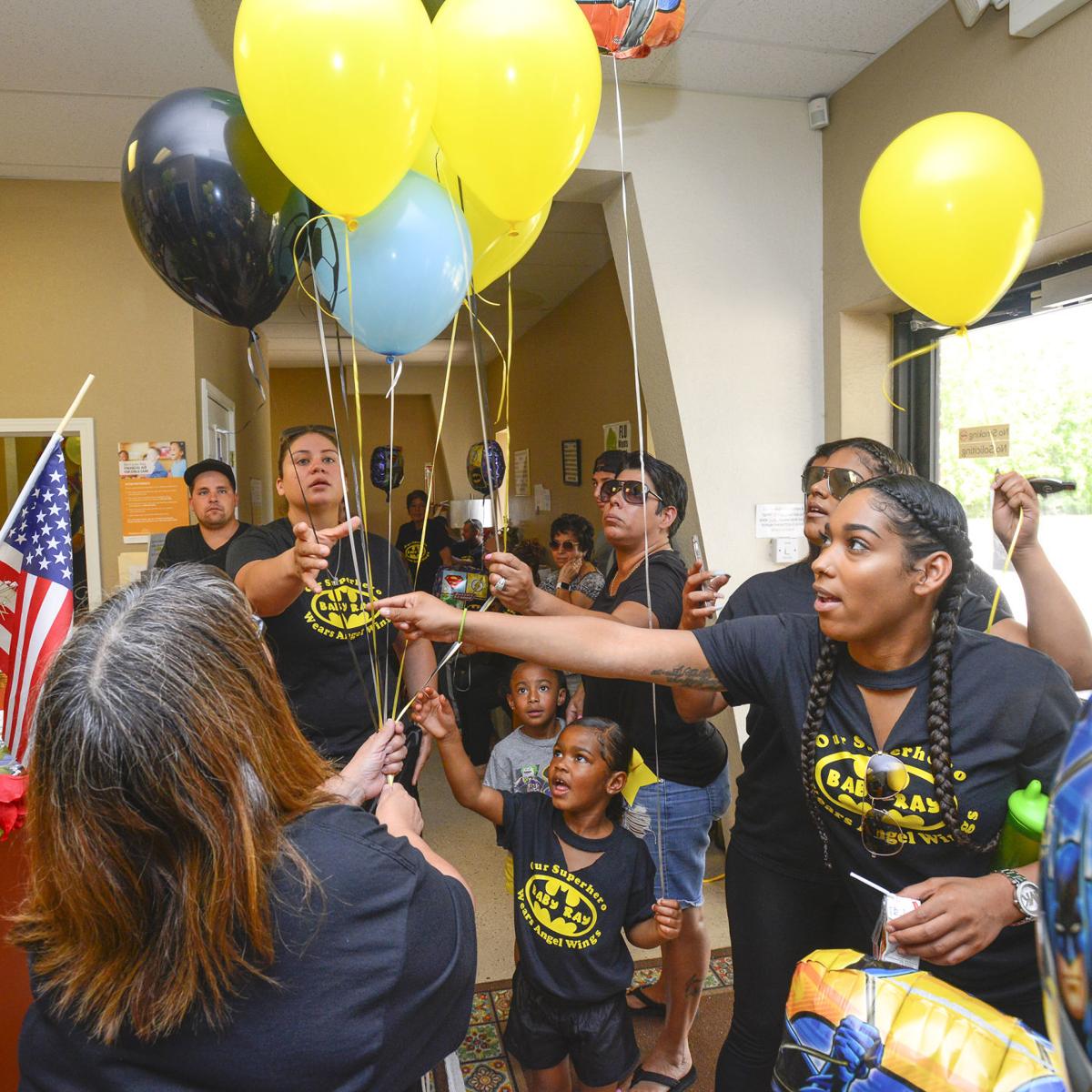 Balloons are handed out for a release Friday at Tiny Treasures Learning Center in Angleton in memory of May Rivera, RayShawn Hudson and RayShawn “Baby Ray” Hudson Jr. Baby Ray and his parents were killed and their bodies found last week in Wharton County.

Balloons are handed out for a release Friday at Tiny Treasures Learning Center in Angleton in memory of May Rivera, RayShawn Hudson and RayShawn “Baby Ray” Hudson Jr. Baby Ray and his parents were killed and their bodies found last week in Wharton County.

He wanders around, looking at where his owner and her family used to be. Roscoe used to wake up Baby Ray in the morning with kisses, said Maya’s mother, Frances Rivera.

Roscoe was Maya’s baby, Frances said. She got him one year before Baby Ray was born, so he was like his big brother.

He’s not the only one starting to face reality.

“It’s just starting to sink in that I’m never going to see her again,” Frances said.

Frances misses her grandson, who called her Yaya, “so terribly,” she said.

Maya had an important presence in her mother’s home.

Frances is in Stage 4 liver failure, hoping for a transplant, and her father has advanced Alzheimer’s. Maya often woke up in the morning and began cleaning and cooking breakfast, convincing her mom to eat even when she didn’t want to, she said.

Maya juggled these responsibilities along with working as a licensed massage therapist at Dow Wellness Center, taking RayShawn to work at Port Freeport and dropping Baby Ray at Tiny Treasures Learning Center or pre-kindergarten classes at Central Elementary, where he would have started kindergarten in August.

Most weekends, the couple and their son would ride horses on trails at property owned by RayShawn’s family in Jones Creek, Frances said.

Baby Ray took a huge liking to trail riding. He often asked his Yaya to read him his favorite book, “Bucky’s Friends,” which is about a horse-riding cowboy, she said.

Horse riding was one of RayShawn’s later interests in life, said his mother, Johana Bonilla. First it was soccer, then he played basketball for Brazosport High School, she said.

RayShawn comes from a large family and has many different people who love and care about him, aunt Juanita Ortega said. His family was spread out among many different places, but they all loved Baby Ray and Maya just the same because they were always together, Ortega said.

Bonilla, her 9-year-old son, Carlos, and the late family of three had plans to visit Nicaragua, where Bonilla is from, in August. She had already informed her extended family that RayShawn, Maya and Baby Ray, would be coming, she said.

Now that they are gone, she holds on to her memories of Baby Ray saying, “I love you, Grandma.”

Carlos feels extremely sad about losing his older brother, he said. Baby Ray used to call him “uncle” and ask him to pick him up, he said.

Both of the mothers said they have not slept since the missing persons reports on the family members were filed June 13.

Many people have reached out to the family to let them know they are praying and thinking about them, Frances said. She knows that will calm down eventually, but she hopes people will always remember her family and rally behind convicting Robert Allen Satterfield, who is charged with their deaths.

The families are planning multiple Celebration of Life services, and invited the community to come together and show their support.

One service will be at 11:30 a.m. today at Fresno Worship Center, 209 Broadmore Drive in Fresno.

Frances is planning another celebration of life service from 11 a.m. to 2 p.m. July 3 at Life Foursquare Church in Angleton, 501 Karankawa St.

There will be a “celebration dinner” afterward at the Knights of Columbus Hall in Angleton from 4 to 8 p.m.

Frances is hoping local businesses can help provide food, plates, silverware and anything else needed so people can come together and have a meal with the family.

Though Satterfield claims to be an old friend of Hudson Sr. and says he was driving their car with permission and mourns the deaths the family, Maya’s mother Frances Rivera said she knows he’s lying about the car.