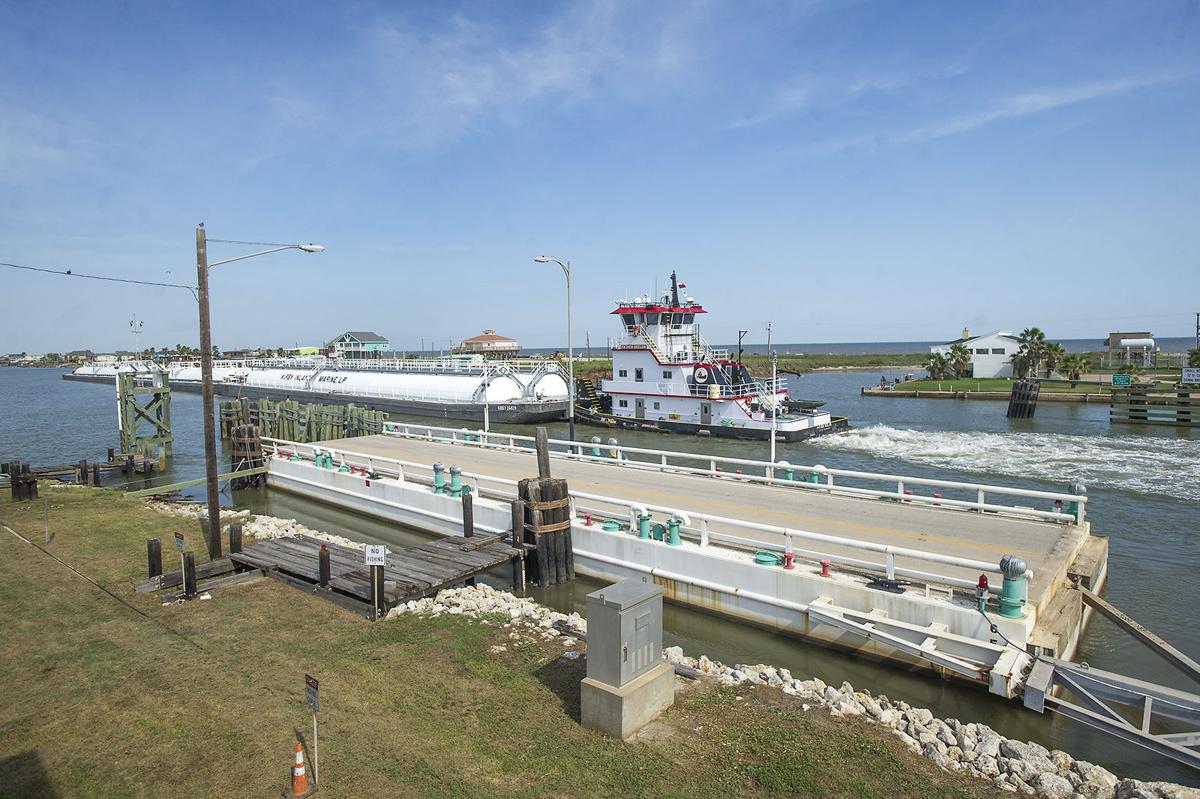 A barge on the Intracoastal Waterway is towed through the opened swing bridge in Sargent. 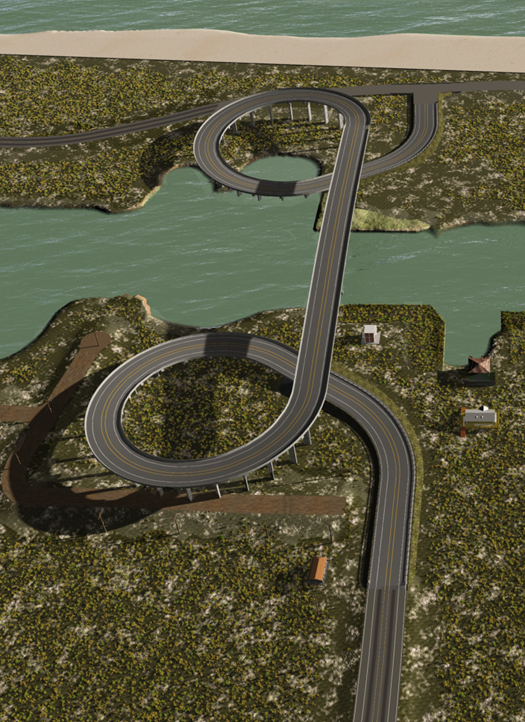 Artist rendering of the proposed Sargent Bridge, which would replace the state’s last operating swing bridge on FM 457. 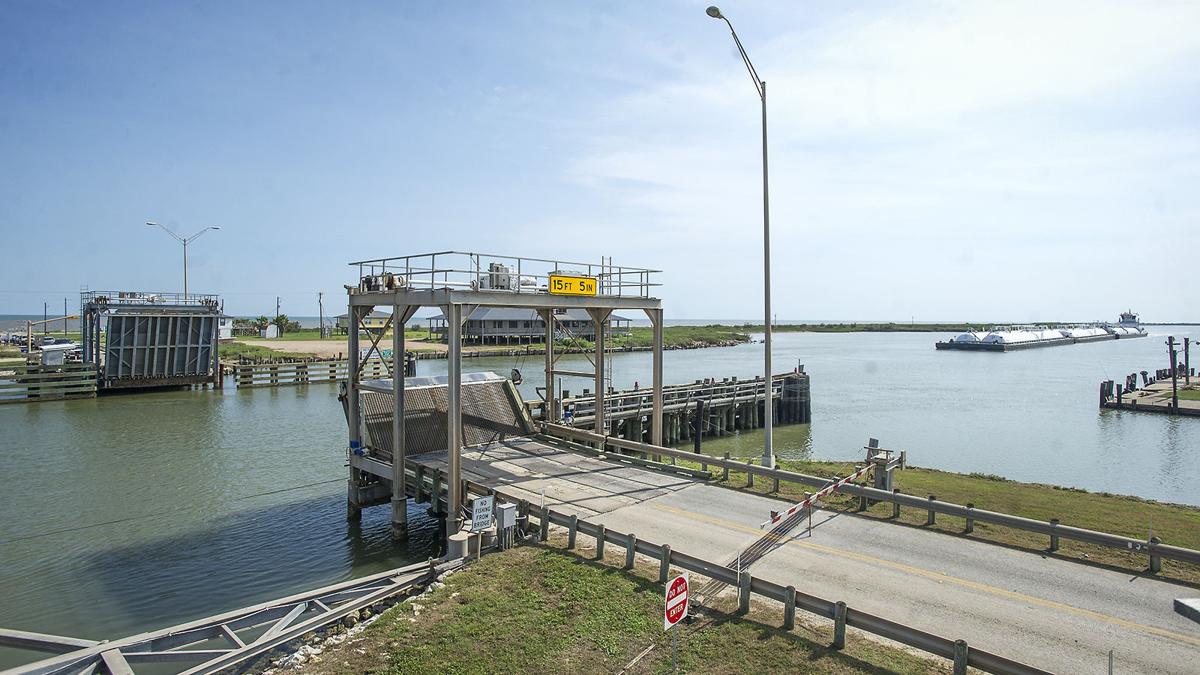 Traffic is stopped along FM 457 in Sargent as the swing bridge is opened for a barge Thursday. 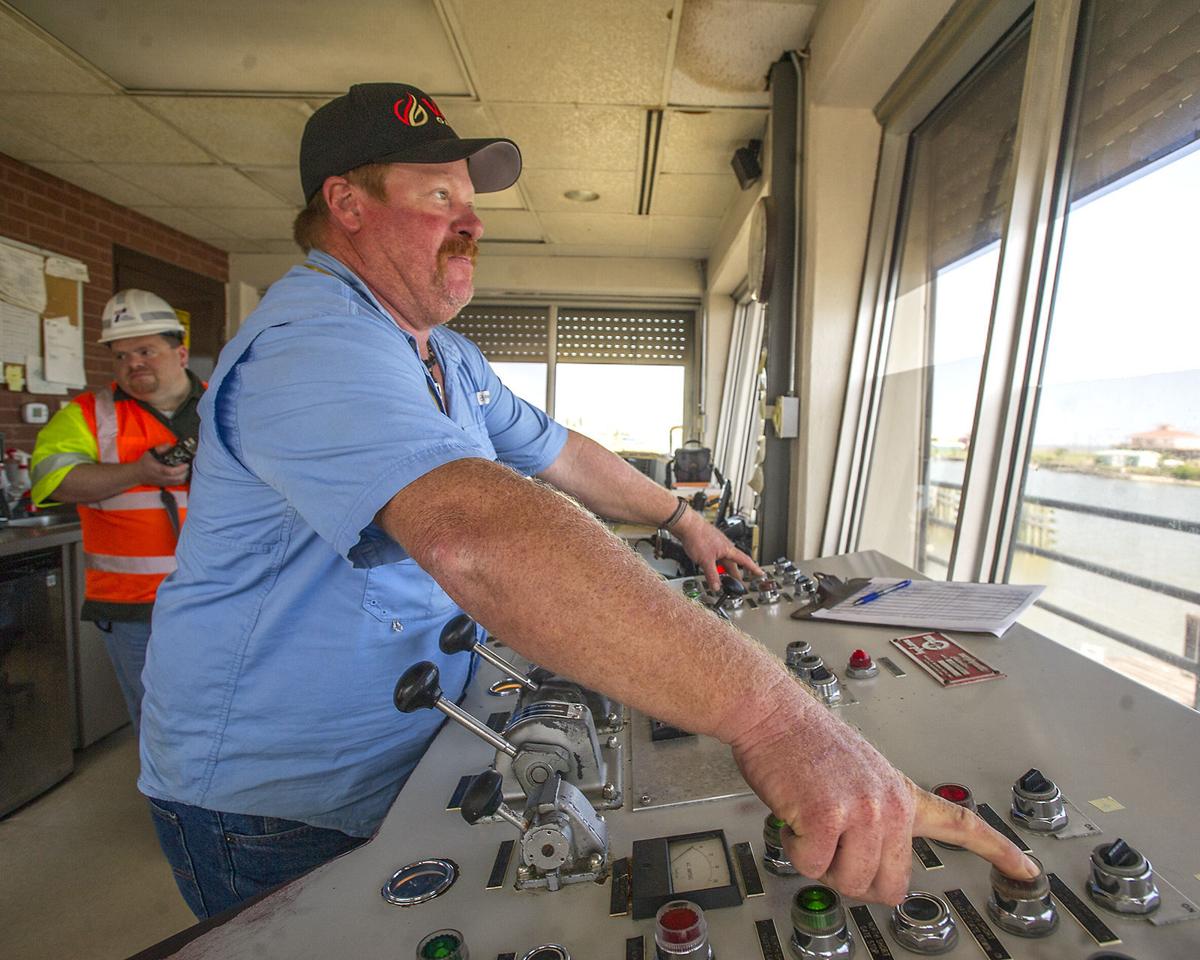 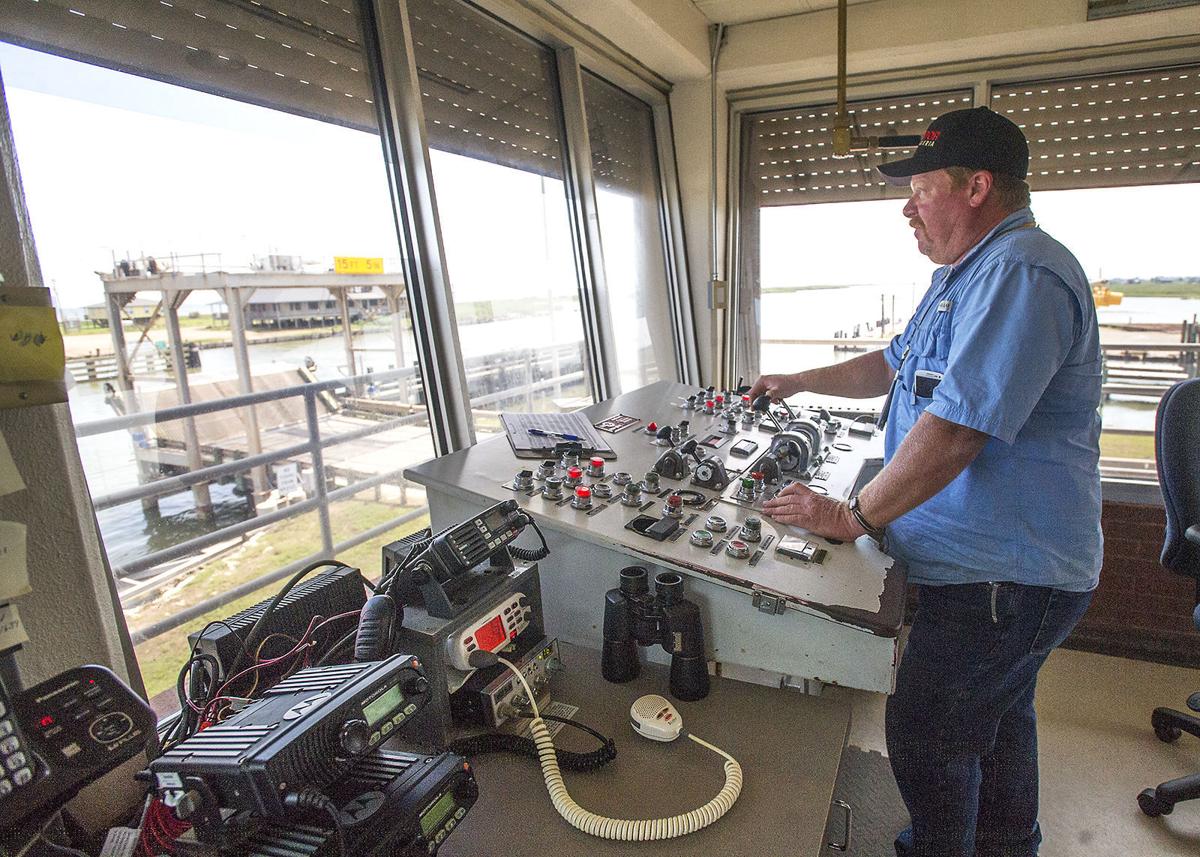 Bridge Operator Steve Gartman controls the brakes in August 2015 as he closes the swing bridge over the Gulf Intracoastal Waterway in Sargent. 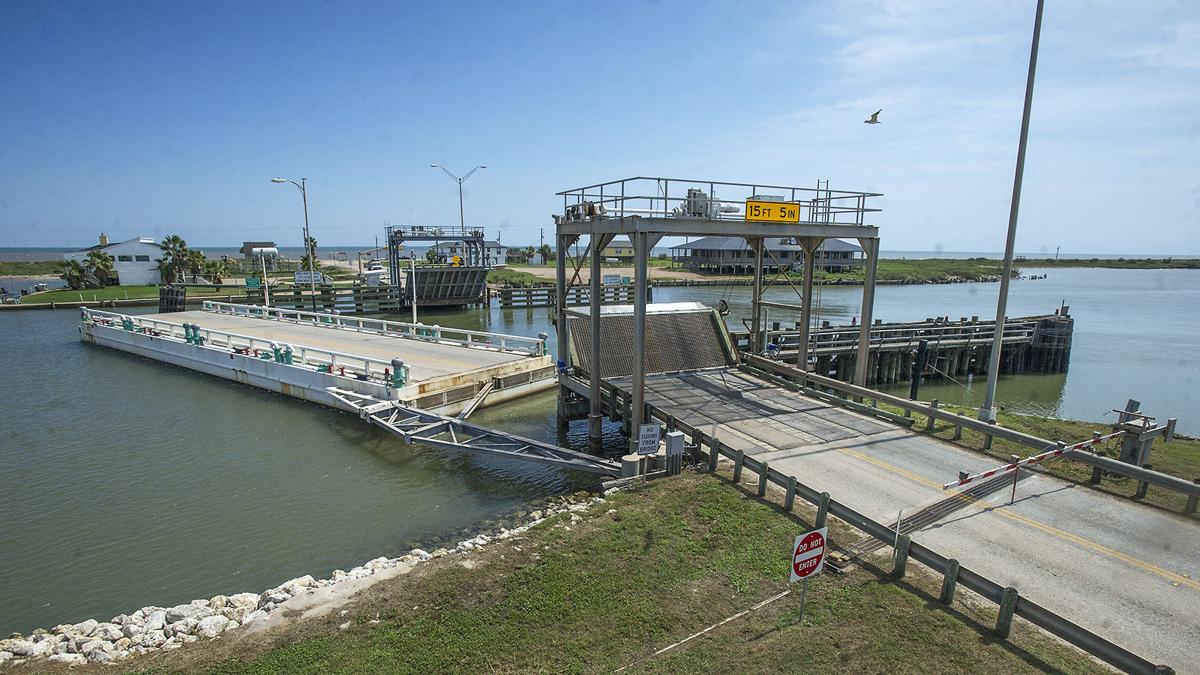 The bridge on FM 457 swings open Thursday as a small boat approaches along the Intracoastal Waterway in Sargent.

A barge on the Intracoastal Waterway is towed through the opened swing bridge in Sargent.

Artist rendering of the proposed Sargent Bridge, which would replace the state’s last operating swing bridge on FM 457.

Traffic is stopped along FM 457 in Sargent as the swing bridge is opened for a barge Thursday.

Bridge Operator Steve Gartman controls the brakes in August 2015 as he closes the swing bridge over the Gulf Intracoastal Waterway in Sargent.

The bridge on FM 457 swings open Thursday as a small boat approaches along the Intracoastal Waterway in Sargent.

SARGENT — In a matter of months, construction will begin to replace the area’s only remaining swing bridge.

The Texas Department of Transportation is set to start construction sometime in April or May on a new corkscrew bridge to replace the FM 457 pontoon swing bridge over the Gulf Intercostal Waterway, Matagorda County Judge Nate McDonald said.

“The commissioners’ court took action a number of months ago to fund our portion of the about 4.2-acre right-of-way needed to build the expanded bridge,” he said. “It’s of course much larger than the little swing bridge that’s there now.”

The new $28.7 million concrete bridge will be 2,363 feet long and 50 feet wide with two 12-foot travel lanes, a four-foot median and 10-foot outside shoulders, The Bay City Tribune reported in November.

From the state’s aspect, McDonald understands the need for the FM 457 Bridge Replacement Project, noting the occasional safety problems and inconveniences posed by the current swing bridge, he said.

“I think it’s a needed project — that’s one of the worst choke points on the Gulf Intercostal Waterway,” he said. “That swing bridge — it narrows down there and two barges have a real hard time passing. Matter of fact, one of them usually ends up on the shore or in the pilings or something bad when you get two barges trying to pass.”

Matagorda County Sheriff Frank Osborne told the The Bay City Tribune in November his deputies have to go out and direct traffic on a regular basis because of collisions damaging the swing bridge in addition to it experiencing mechanical issues.

“We’ve had more trouble with that bridge this year than at any other time,” Osborne said.

Taking away the restraints of the current swing bridge, which extends 120 feet and clears 15 feet, 5 inches, also is good for the state’s economy, McDonald said.

“Of course, the (Intracoastal) is one the biggest, if not the largest, arteries for commerce in the state of Texas,” he said. “A lot of product is moved up and down that thing — billions and billions of dollars every month. They are going to open that profile up because of that.”

The highway department also has stated the project is necessary because of the high maintenance costs associated with swing bridge, which can reach about $500,000 annually.

Likewise, the stationary bridge will allow easier access for emergency personnel, according to the state agency.

Meanwhile, McDonald said there also are other reasons the new bridge project is good for the county — especially residents in Sargent.

“It has the ability to get more people across the (Intracoastal Waterway) in a more consistent way,” he said. “TxDOT built a similar bridge in Matagorda about eight years ago, and it’s really been a boon to folks wanting to get to the beach there.”

Still, it is a little sad to see the project begin because of the times he spent waiting for the swing bridge as a youth, McDonald said.

“I grew up here and it was always a fun time to have your girlfriend with you and get stopped by the swing bridge,” McDonald said. “We had two of them in this county for all of my life, so yeah, there is sentimental value for me. But I understand that time moves on, and if we are going to be a successful state, we need to help one another work together — counties, the state, municipalities and all those types of things.”