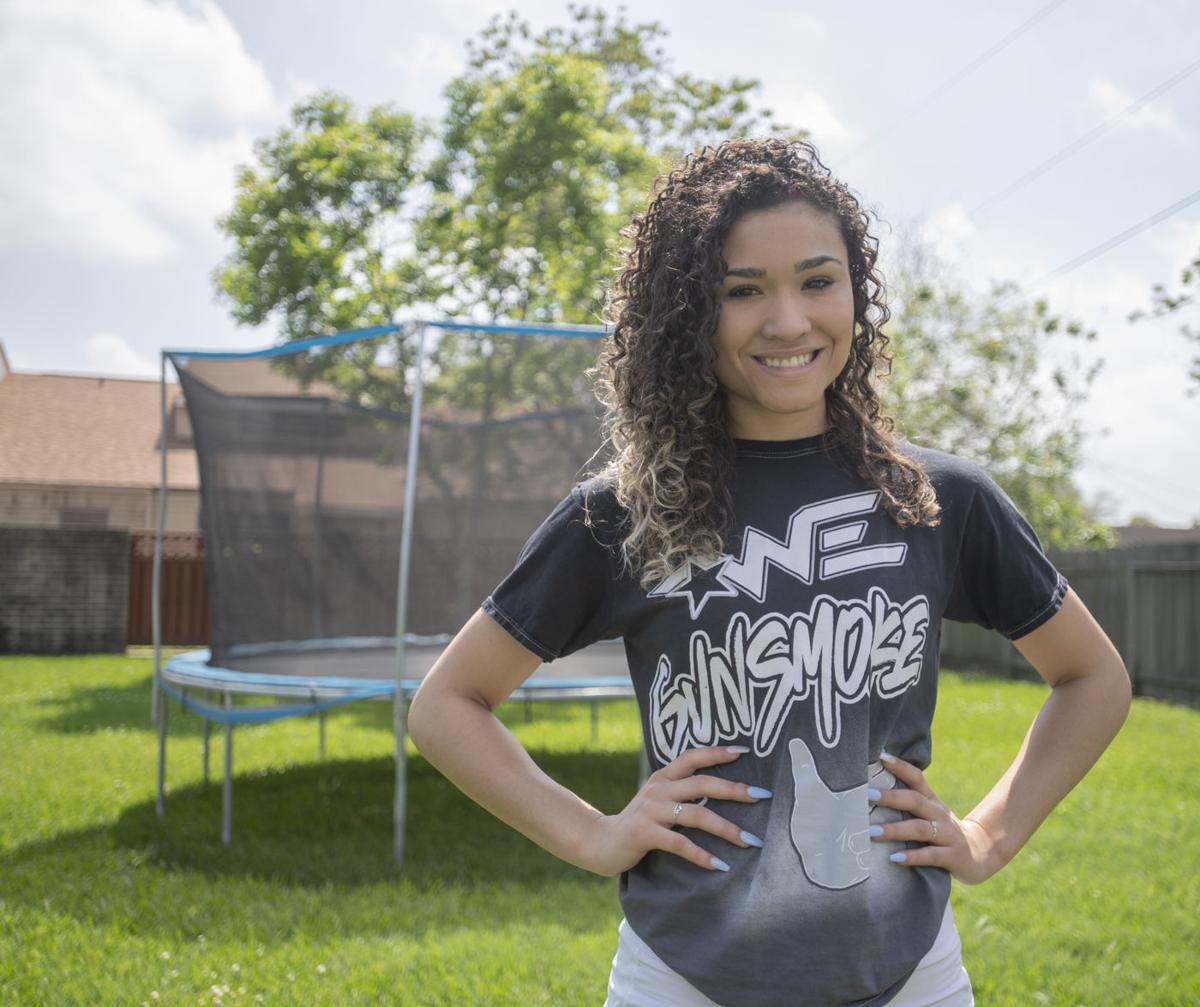 J’Dyn King is a senior at Angleton High School and cheers competitively on a team called Gunsmoke by Woodlands Elite. 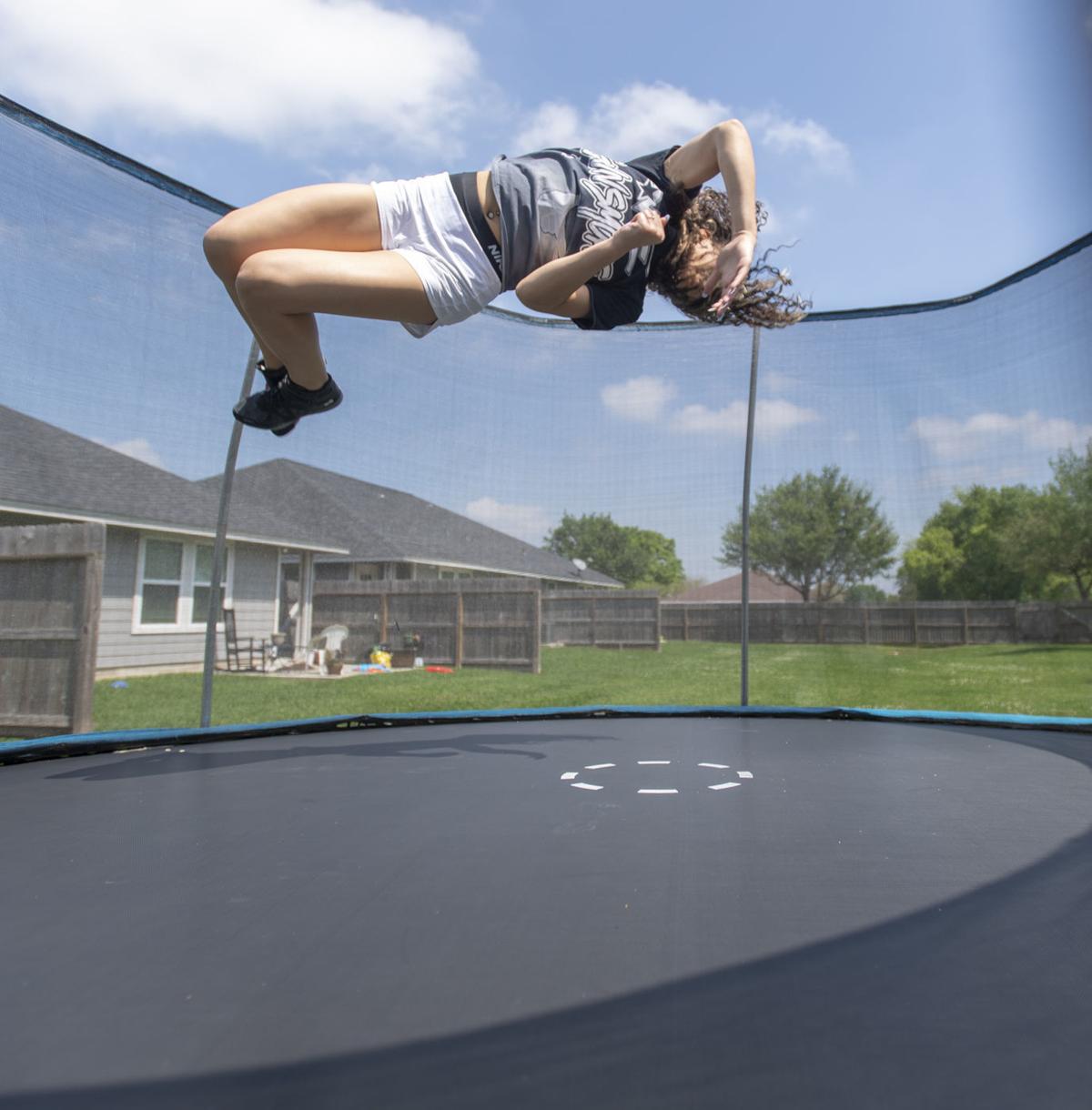 Woodlands Elite cheerleader J’Dyn King practices cheer exercises Wednesday at her home in Angleton. Due to the coronavirus, King is not able to go to regular practices at the gym. 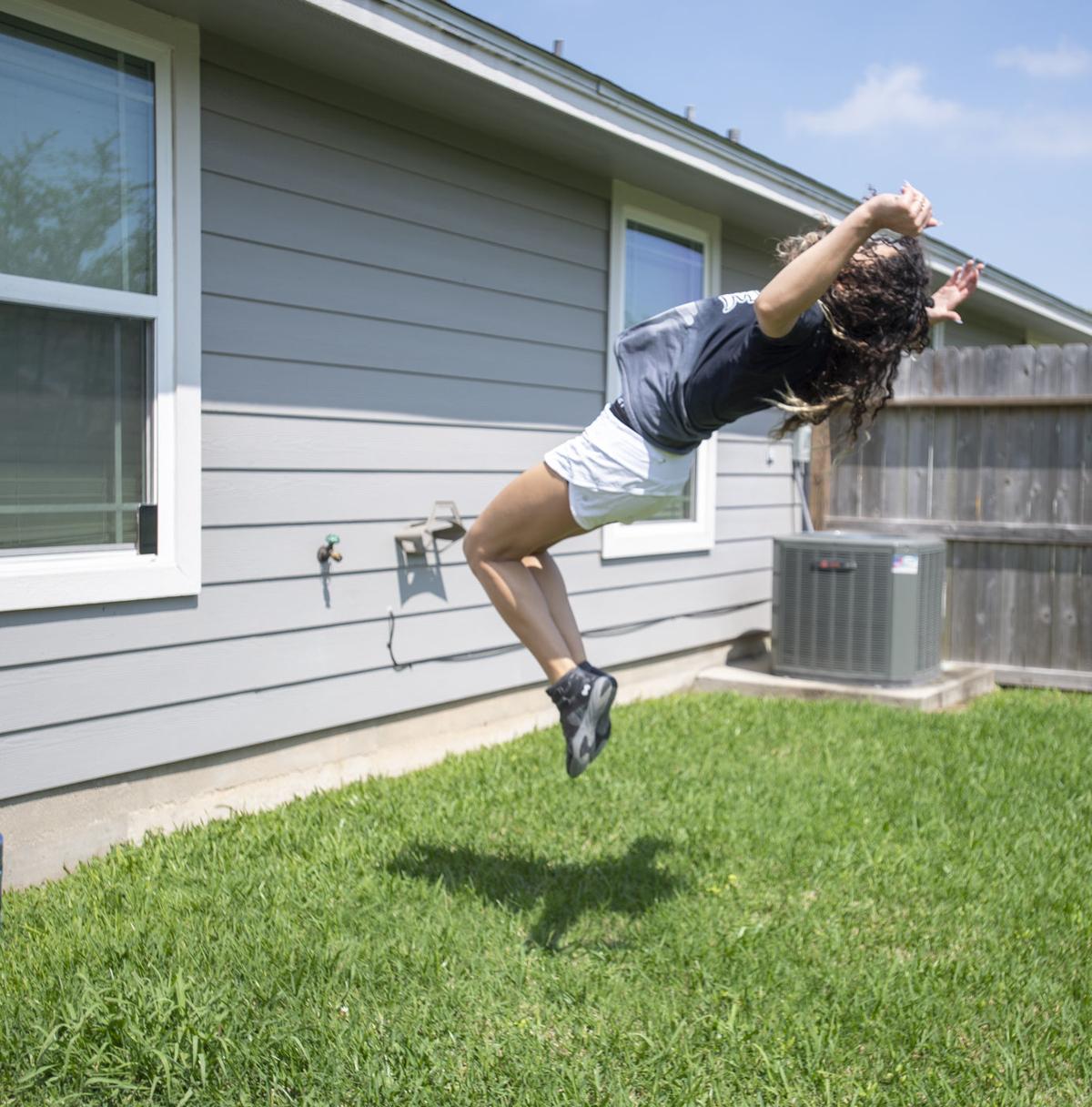 Angleton senior J’Dyn King practices tumbling Wednesday in her backyard with her phone set up to Zoom, a group video chat, so her coach and team can practice together from a distance.

J’Dyn King is a senior at Angleton High School and cheers competitively on a team called Gunsmoke by Woodlands Elite.

Woodlands Elite cheerleader J’Dyn King practices cheer exercises Wednesday at her home in Angleton. Due to the coronavirus, King is not able to go to regular practices at the gym.

Angleton senior J’Dyn King practices tumbling Wednesday in her backyard with her phone set up to Zoom, a group video chat, so her coach and team can practice together from a distance.

ANGLETON — As athletics are put on hold worldwide due to the coronavirus pandemic, J’Dyn King hopes to have the chance to compete with her cheer team before going to college.

In the time that would usually be spent regularly commuting to The Woodlands and practicing the hardest, the competitive cheerleader and a senior at Angleton High School just hopes that the 2020 Cheerleading Worlds Competition will happen at some point.

Plans for King’s last months of school, prom, graduation and celebrations with her family all remain in flux.

King plans to compete in the competition as a back spot in the open-coed 16 Gunsmoke league from the Woodlands Elite gym, she said. As of Sunday, the competition is delayed indefinitely and her team’s future is unclear.

“Right now, it’s … stressful because our big competition, worlds, is rescheduled and I’m a senior so this might be my last year to compete with my team,” King said. “The competition might be rescheduled this summer, but I’m not sure.”

The competition could be delayed until summer or the beginning of the next school year, she said.

“Worlds” is an international competitive cheerleading event held annually in Orlando, Florida at the ESPN Wide World of Sports Complex. Cheerleading teams must be invited to compete for gold, silver, and bronze titles.

The competition originally scheduled for April 24 to April 26 was delayed March 15 to a date that has yet to be determined, according to a release on its website.

King is maintaining cheer practice to stay ready for whenever she can jump back into the competitive cheer world. She’s practicing solo, but with virtual guidance, which allows her to interact with her teammates and coach.

“So far, we are all doing online practices because our team is too big and, basically, our coach leads a full at-home practice,” King said. “Of course, it’s not the same.”

On top of the stress of this year’s competitive cheerleading delays, King is worried about her college tryouts, as she’s planning to begin college at the University of Texas this next semester.

“With Worlds being delayed, I’ll have to juggle competitive cheer at the same time as UT tryouts, since they are both scheduled now to happen around the same time,” King said.

King is in the top tier of her graduating class. Her mother, Shana Harris, is proud of her daughter’s achievements, though she hopes she gets the graduation party she deserves, she said.

“J’Dyn is pretty independent so she stays on top of all of her schoolwork,” Harris said. “She’s at the top of her class, and I’m proud to have raised her.”

King is disheartened that she might not get a graduation ceremony, prom or her last few months at school, she said.

“So far, it sounds like the principal and staff are trying their hardest to make prom and a graduation ceremony possible, which I’m thankful for, and if it can’t happen, I understand,” King said. “I do hope things go back to the way they were sooner than later.”