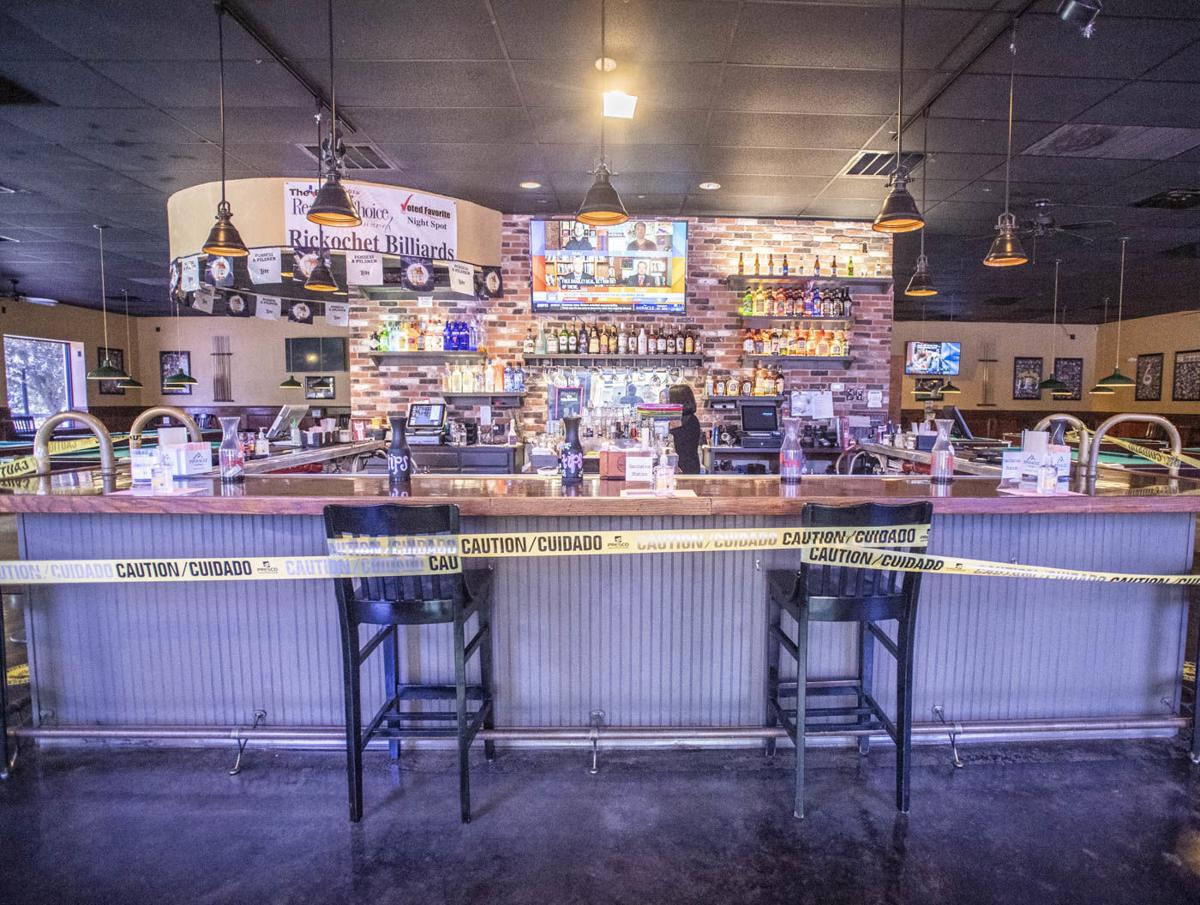 The bar top is closed off to customers at Rickochet Billiards in Lake Jackson to prevent crowding. Customers have available seating around the building or outside on the patio. 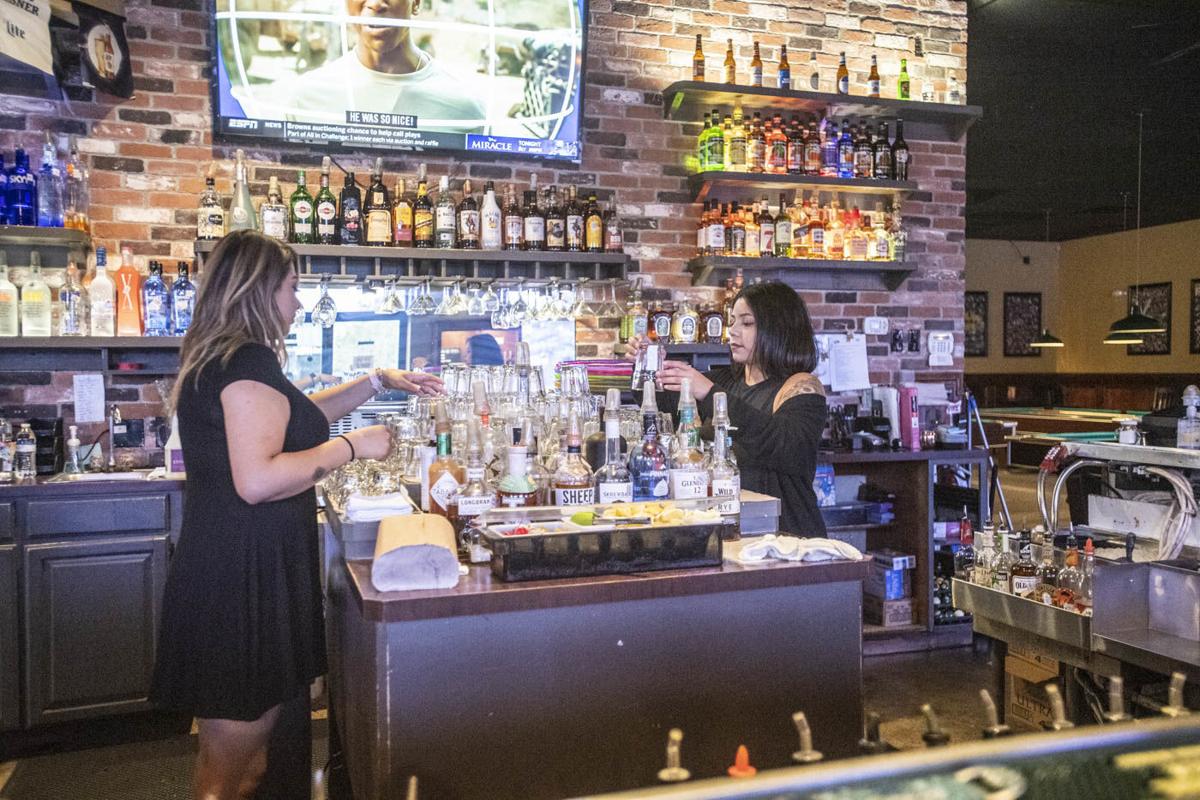 Bartenders and managers on duty Kris Saenz, right, and Monica Salas stock glasses in preparation for a busy Friday night at Rickochet Billiards in Lake Jackson as Gov. Greg Abbott allowed bars to reopen in Texas. 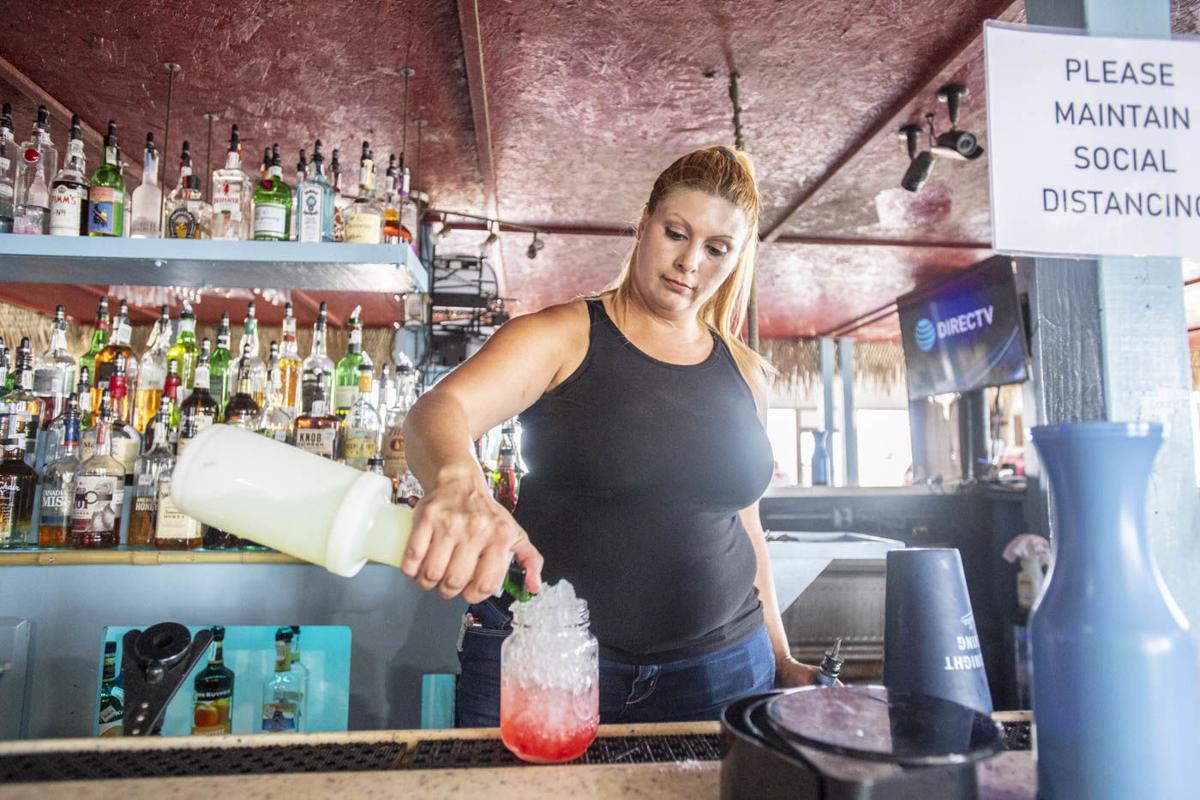 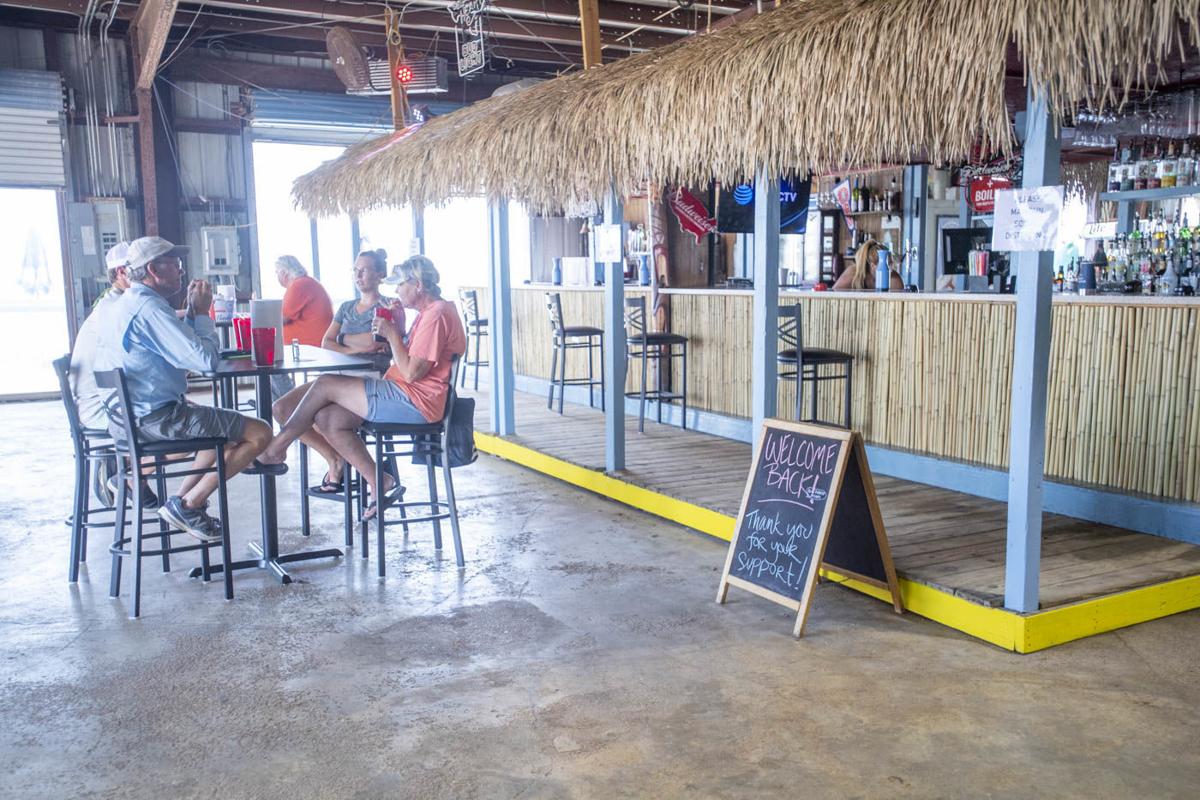 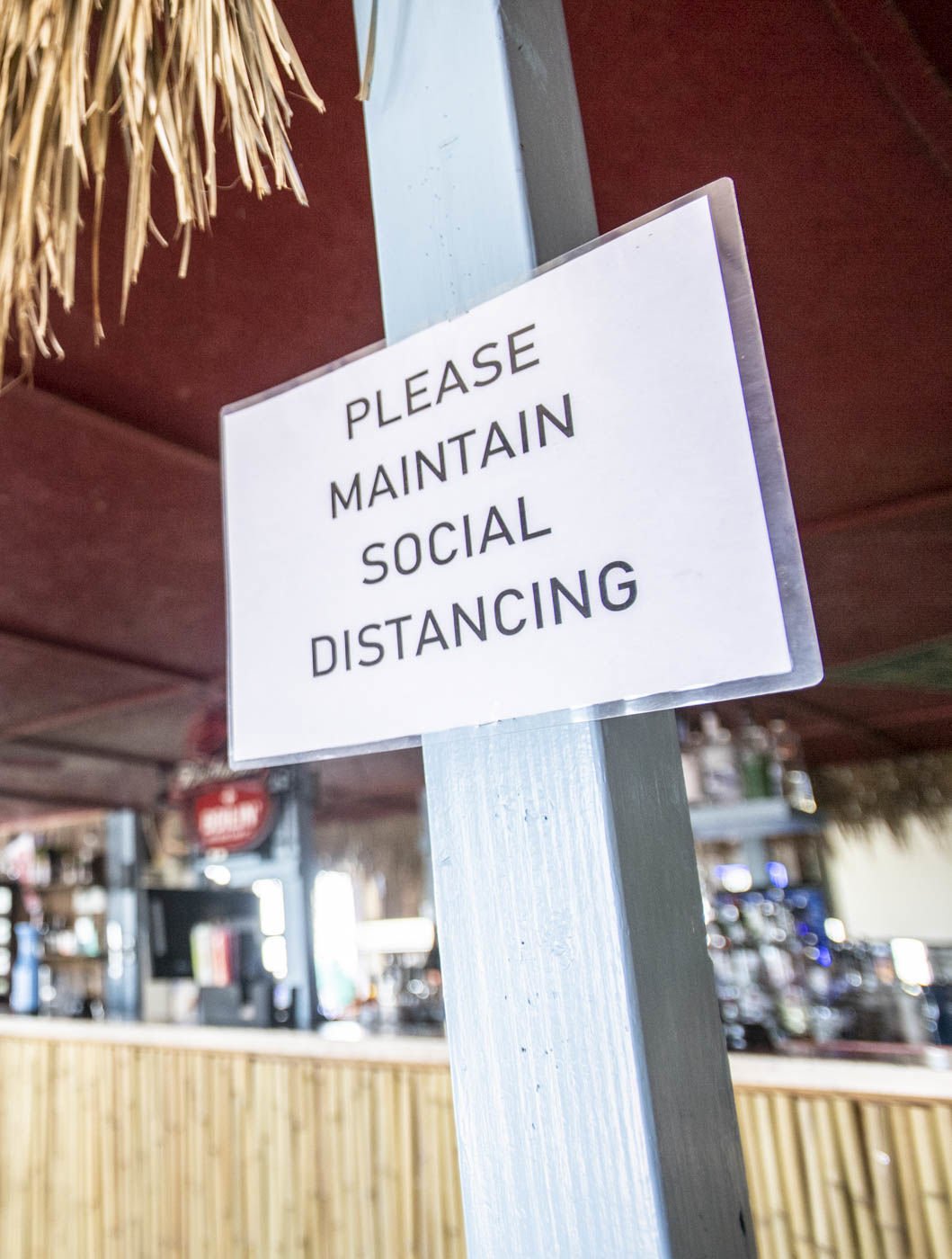 Signs are posted around Pier 30 in Freeport to remind customers to maintain social distancing on Friday as bars were able to reopen in Texas.

The bar top is closed off to customers at Rickochet Billiards in Lake Jackson to prevent crowding. Customers have available seating around the building or outside on the patio.

Bartenders and managers on duty Kris Saenz, right, and Monica Salas stock glasses in preparation for a busy Friday night at Rickochet Billiards in Lake Jackson as Gov. Greg Abbott allowed bars to reopen in Texas.

Signs are posted around Pier 30 in Freeport to remind customers to maintain social distancing on Friday as bars were able to reopen in Texas.

Texas drinkers had happier hours Friday than they may have had in more than two months.

For staff at Rickochet Billiards in Lake Jackson, reopening was a long and exhausting process.

Although they are restricted to 25 percent capacity, General Manager Marissa Arevalo was elated to serve the public face-to-face.

“It’s not going be like it was, but I’m so happy to see everyone again,” Arevalo said. “We have had a lot of people asking about when we can open and today is the day.”

As time elapsed and other businesses were allowed to reopen, Arevalo stayed positive.

“For me personally, I viewed it as we are more special,” Arevalo said. “The anticipation grew stronger as time went on. A lot of people felt like that.”

Loyal regulars returned with their first drink on Owner Rick Clark, a small price for him to pay for their support and appreciation, Arevalo said.

“Rick bought all the regulars their first drink,” Arevalo said. “We are so happy to see everyone. I already know it’s going to be a regular who steps in first. I probably don’t know them, but I miss them. I miss this.”

Freeport’s Pier 30 had been delivering and offering take-out food since the pandemic began, but nothing could replace the interaction with their customers.

For nearly a decade, Dennis Arana has enjoyed a cold beer and live music every weekend, along with crawfish when it’s in season. With that gone for weeks, Arana had a greater appreciation when Pier 30 reopened.

“It’s one of the better places in town,” Arana said. “This is all I have waited for. My job and my life have stayed the same except being able to have a beer at a bar. Drinking on the porch isn’t the same.”

His server, Brandie Garza, was once bored with the slow days without human interaction.

“I love being back here with people,” Garza said. “It’s awesome. This keeps me busy and I love that.”

Manager Sarah Glennie called the reunion of her staff and customers “relieving.”

“We made it through not being open to the public for exactly two months,” Glennie said. “It was like going back to school and seeing all your friends again.”

For safety, Rickochet’s denied access to the bar by wrapping it with caution tape.

Tables on the floor were removed and cleansed with antiviral disinfection religiously, Arevalo said.

Other precautions included installing ultraviolet lights in the air vents, taking out the electronic games and encouraging jukebox play from phones using an app, Arevalo said.

“We wanted our staff to concentrate on cleaning the main bar and pool tables,” the manager said.

All pool tables, cues and balls are disinfected after every customer’s use, she said.

Bartenders received stylist pens to use when placing orders rather than touching the computer screen, Arevalo said. Bartenders will also only add fruit garnishes to drinks upon request to limit touching, she said.

Arevalo is confident a lot of these new protocols will be here to stay.

“It doesn’t add a lot of extra because we were focused on cleanliness to start,” Arevalo said. “Rick doesn’t like a mess and I don’t either.”

In efforts to promote safety, Pier 30 dining tables are spaced out with single-serve condiments that are available upon request, Glennie said.

Paper menus have replaced the plastic ones to contract fewer germs, Glennie said.

Arana, excited to return, is curious whether these practices will be the future for all bars and restaurants.