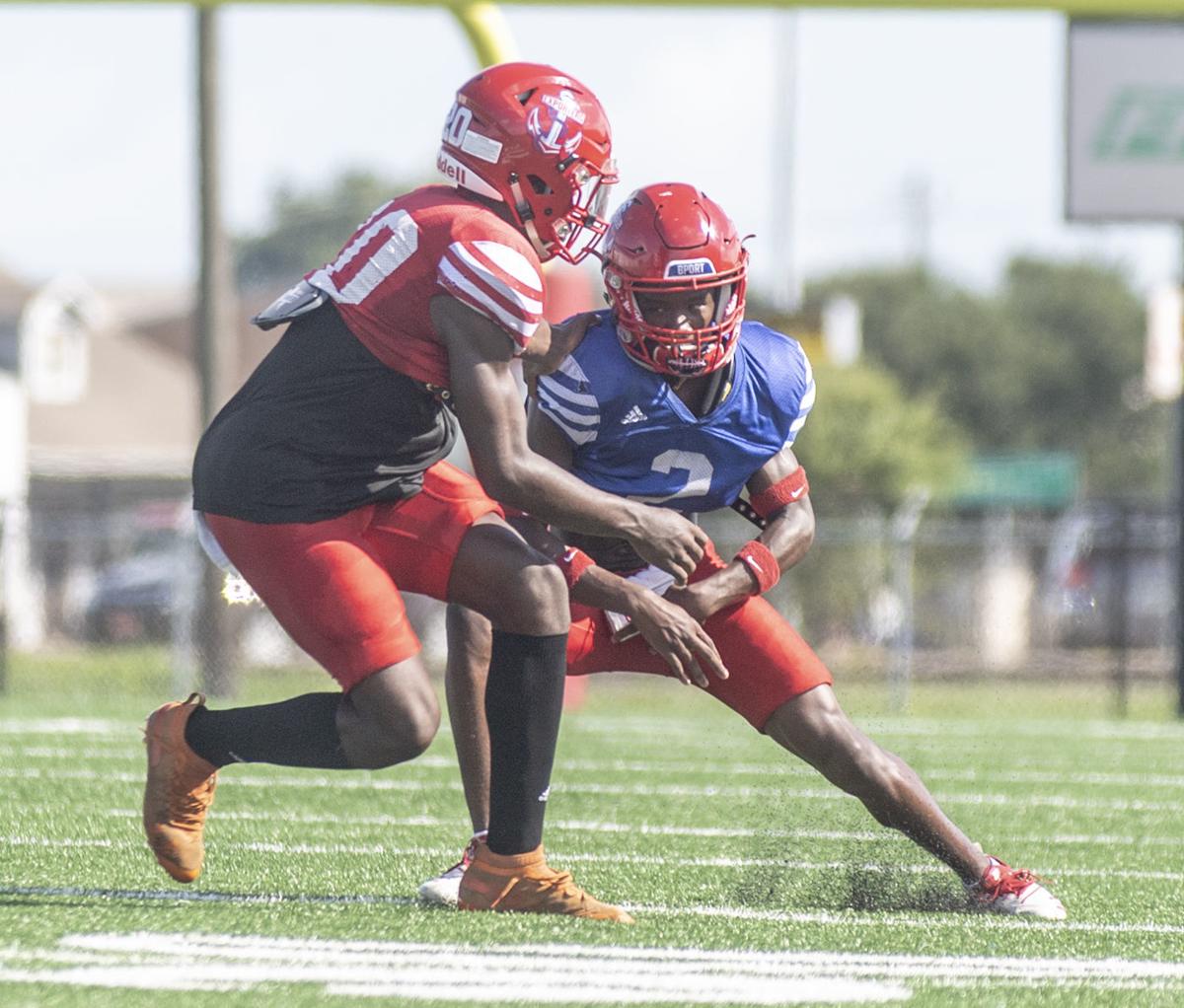 Brazosport’s Kevin Davis defends against Rayleen Bell during a drill at Hopper Field in preparation for the Sweeny Bulldogs during a practice on Sept. 3. 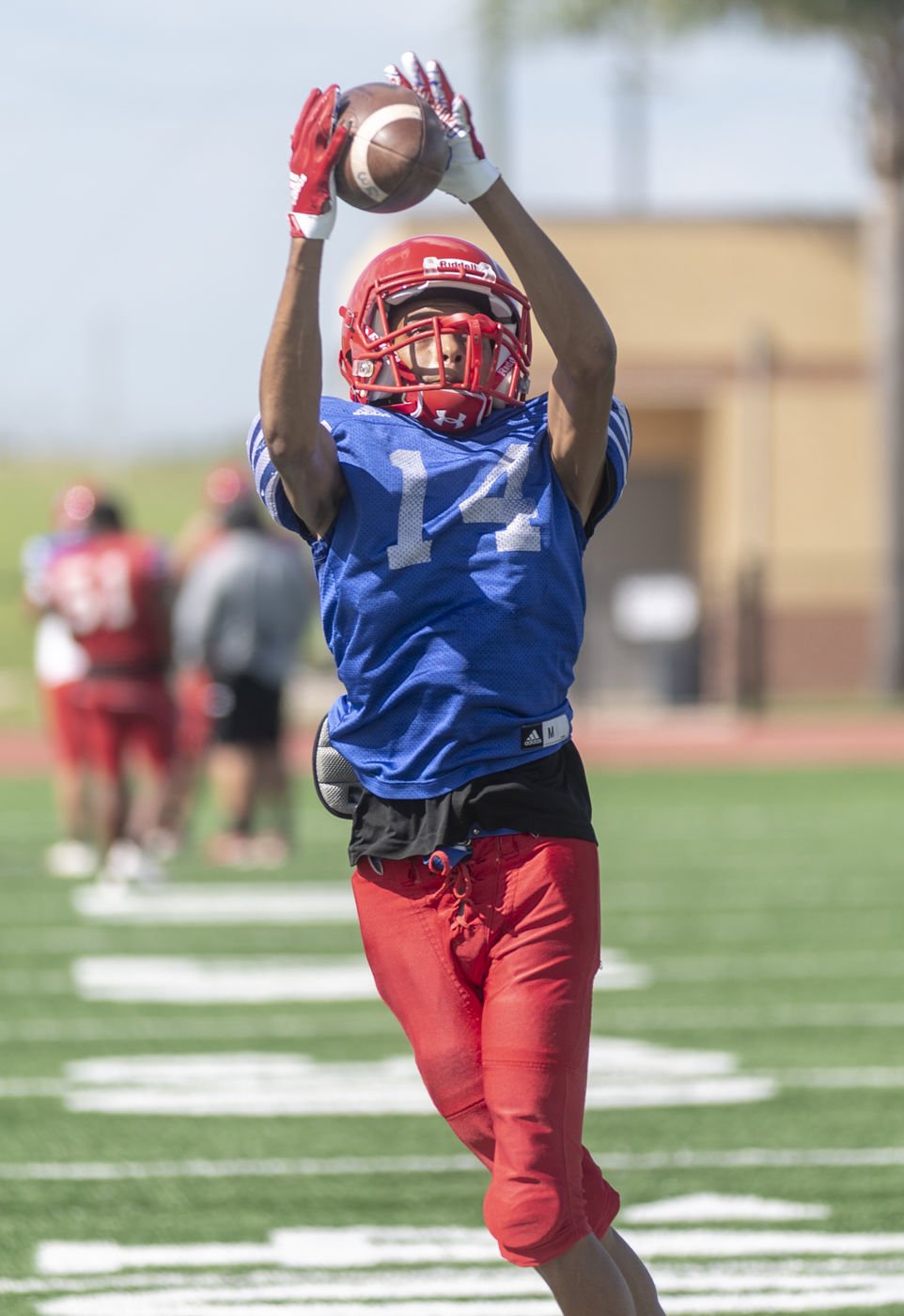 Wide receiver Dominique Vizia jumps to catch the ball Tuesday during a Brazosport practice at Hopper Field in Freeport. 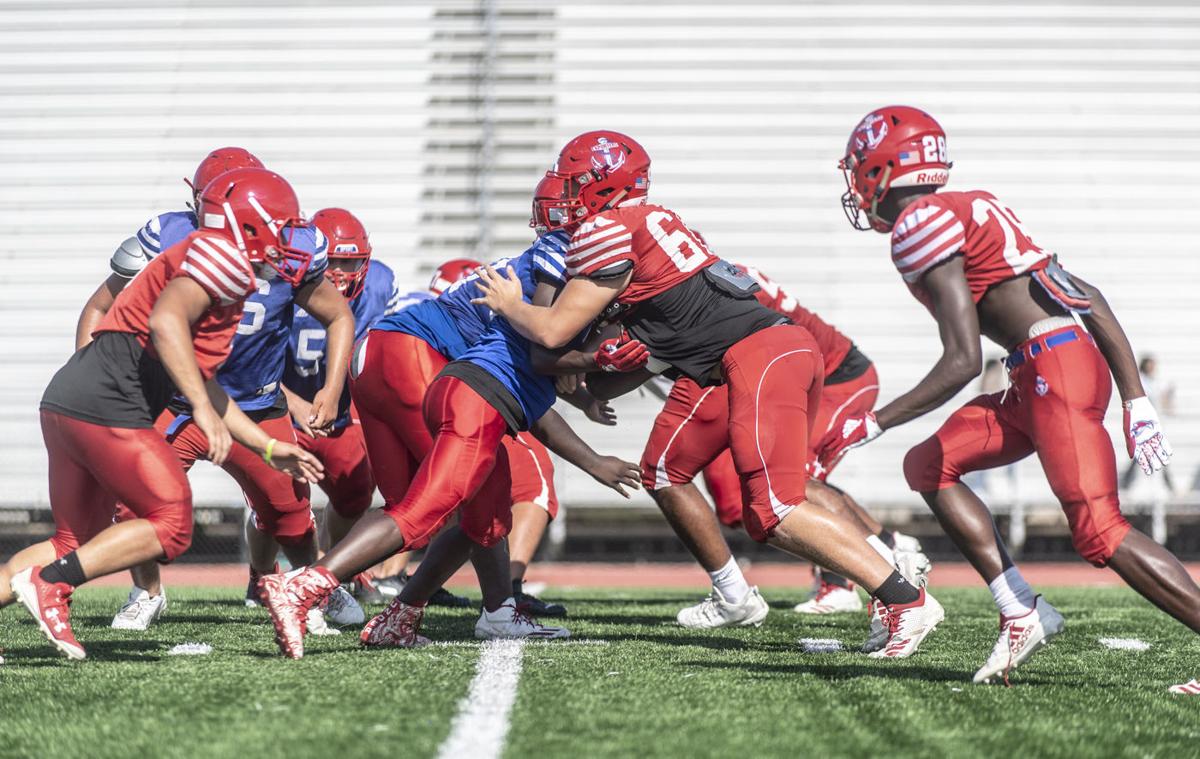 The Brazosport Exporters run drills Tuesday during practice at Hopper Field in preparation for Friday’s showdown with Sweeny. 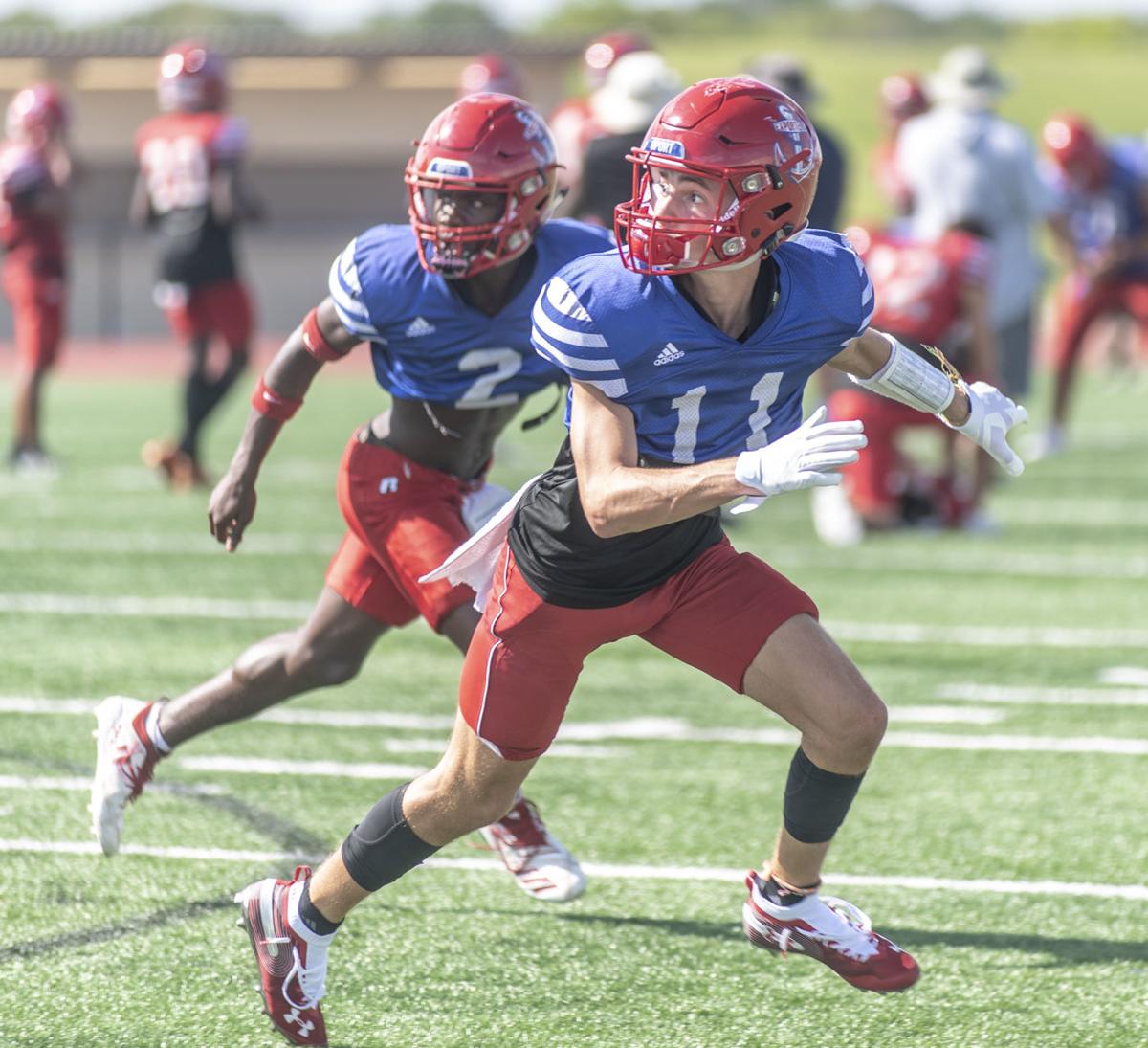 Brazosport receivers Ray Bell (2) and Brendan Brimage (11) run down field during a passing drill Tuesday at practice in Freeport. 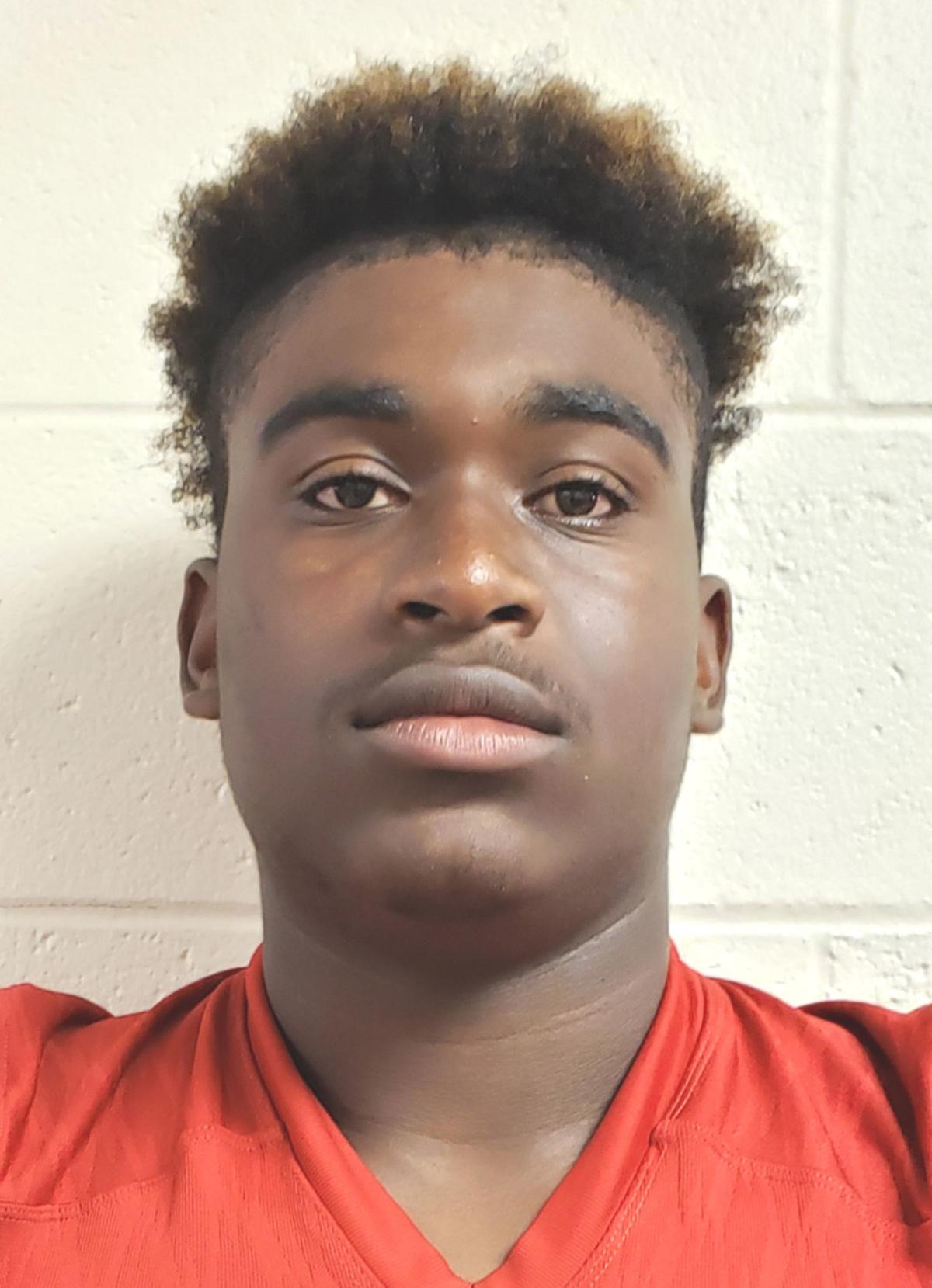 Brazosport’s Kevin Davis defends against Rayleen Bell during a drill at Hopper Field in preparation for the Sweeny Bulldogs during a practice on Sept. 3.

Wide receiver Dominique Vizia jumps to catch the ball Tuesday during a Brazosport practice at Hopper Field in Freeport.

The Brazosport Exporters run drills Tuesday during practice at Hopper Field in preparation for Friday’s showdown with Sweeny.

Brazosport receivers Ray Bell (2) and Brendan Brimage (11) run down field during a passing drill Tuesday at practice in Freeport.

Every player who started on offense last week for the Sweeny Bulldogs was making their first start on varsity. Brazosport opened with a first-year coach and freshman quarterback.

Both opened with impressive first-week victories, but one is all but certain to exit Week 2 with their first loss.

The Exporters and Bulldogs will meet for the 31st time when they put their identical 1-0 records on the line starting at 7:30 p.m. Friday at Bulldog Stadium.

In addition to their records, the teams have other similarities, including breaking in young quarterbacks and relying on a strong running attack.

The Ships’ run game was in rare form during its 33-8 home win against Hitchcock to open the season. Daraell Preston, a 6-foot-1, 220-pound bruiser at running back, rolled up 155 yards on 14 carries with a couple of touchdowns.

“We just need to get the best running out of these players and last week they did that just by putting a body on a body,” first-year Brazosport coach Mark Kanipes said.

Sweeny had an impressive showing on the road against Grand Oaks, a Conroe ISD school playing its first varsity game with a roster of all underclassmen. The Bulldogs held on for a 22-21 overtime victory, and head coach Randy Lynch expects his team to play better this week.

“Obviously our run game isn’t where it needs to be, so we had to go to the throw game and we had some success in that department,” Lynch said. “It is going to be like that all year long because when you have a young ball club, you have to pick and choose what you can be good at. We couldn’t find the running room we wanted against Grand Oaks, but our passing game was the key to our success.”

First-year starter Trey Robbins finished 16-for-25 for 195 yards and no interceptions. Robbins showed an ability to scramble away from the rush and make big throws downfield against the Grizzlies.

“He made the plays for us and at times was pretty accurate for us,” Lynch said of his signal-caller. “I like the way he stepped up and threw the ball effectively and connected with his receivers despite missing his top receiver. Some of those receivers just stepped up and made some catches for us. It was a hard-earned win for us.”

Robbins is questionable for Friday’s game because of illness, Lynch said. Sophomore Trey Palms will be under center if Robbins can’t go, Lynch said.

Brazosport doesn’t have a question at quarterback as it plans to rotate senior Alex Villarreal and freshman Kariyen Goins, a formula that proved successful against Hitchcock.

“Right now they complement one other,” Kanipes said. “One is a senior and knows the offense well and has a lot of composure. The other kid just has a lot of the intangibles and we’ll give both of them the opportunity. It will depend on who has the hot hand that will play.”

A player returning to action for the Bulldogs will be Trey Fields, who is expected to see time in the offensive backfield and at linebacker.

Though the Bulldog defense played well against Grand Oaks, Preston and company will be quite a challenge, Lynch said.

“Preston is just a load, a powerful strong kid, and I am sure they will feed him the rock,” Lynch said. “They have some skill kids on the outside and at the quarterback position. So they are kind of balanced and I know Mark (Kanipes) will try to establish the run, and who else better than Preston. He is a good running back.”

The Bulldogs could showcase sophomore Xavier Woods, who gained 115 yards on 18 carries last week and could create problems for the Exporters.

“Defensively we have to get lined up better; we missed some alignments from last week,” Kanipes said. “We defended the ball well but we took bad angles and we had a bunch of missed tackles. Defensively, we will concentrate on that and offensively we need to hold onto the ball better. We also need to watch out for the penalties.”

Brazosport has a slim 16-13-1 lead in the series, but Sweeny has won five of the last six meetings, including last year’s 31-6 victory at Hopper Field.