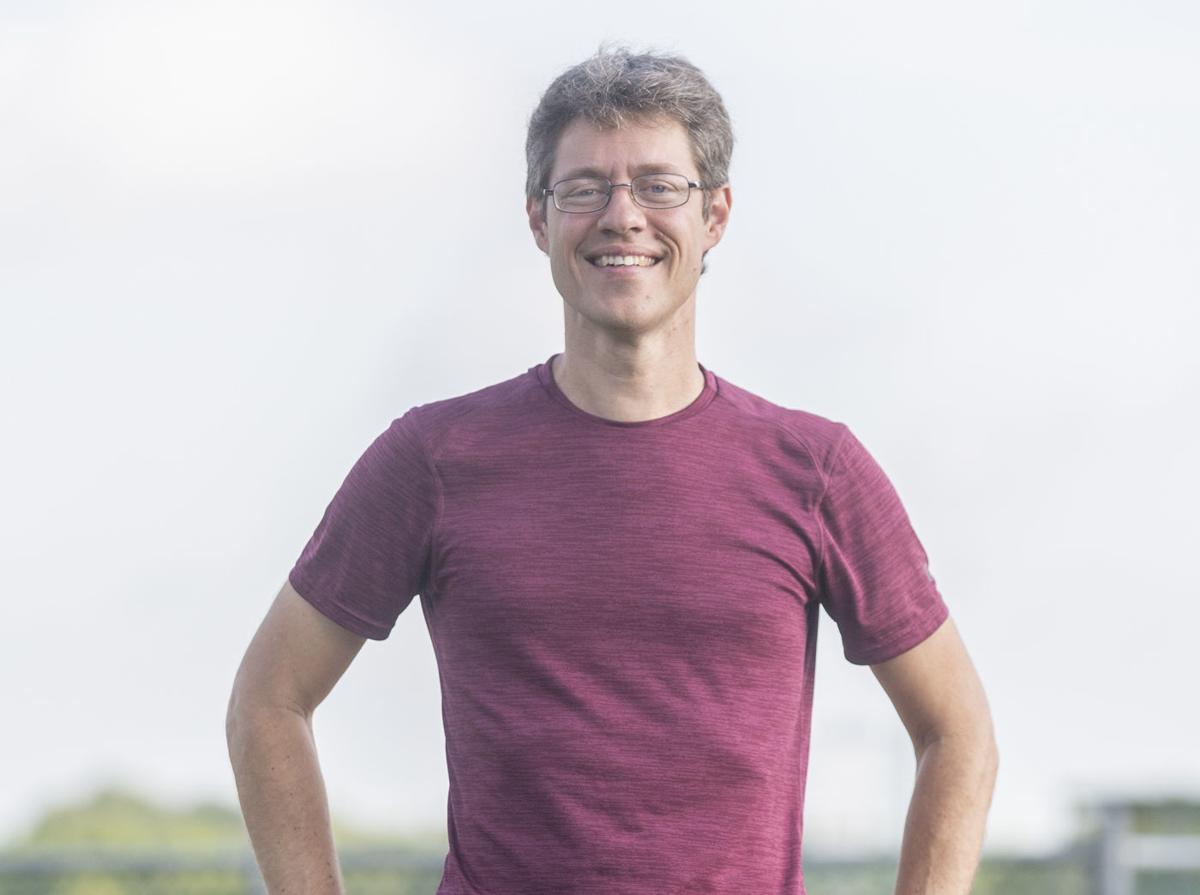 Nathaniel Outcalt has taken running to another level after sitting out for 24 years. Nowadays, Outcalt sets time challenges for himself to stay motivated. 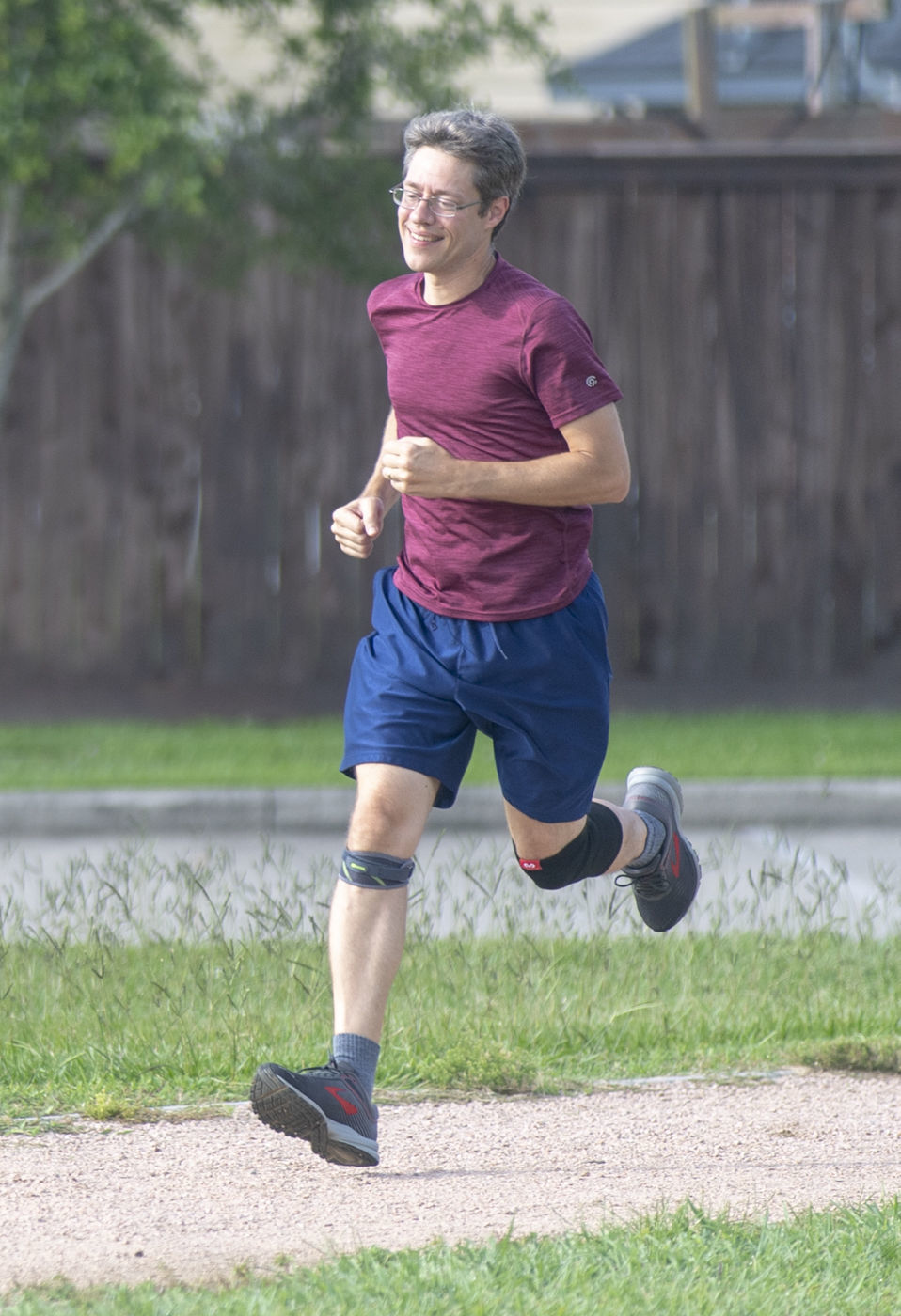 It is with that smile Nathaniel Outcalt approaches each workout or running event nowadays at the age of 46. 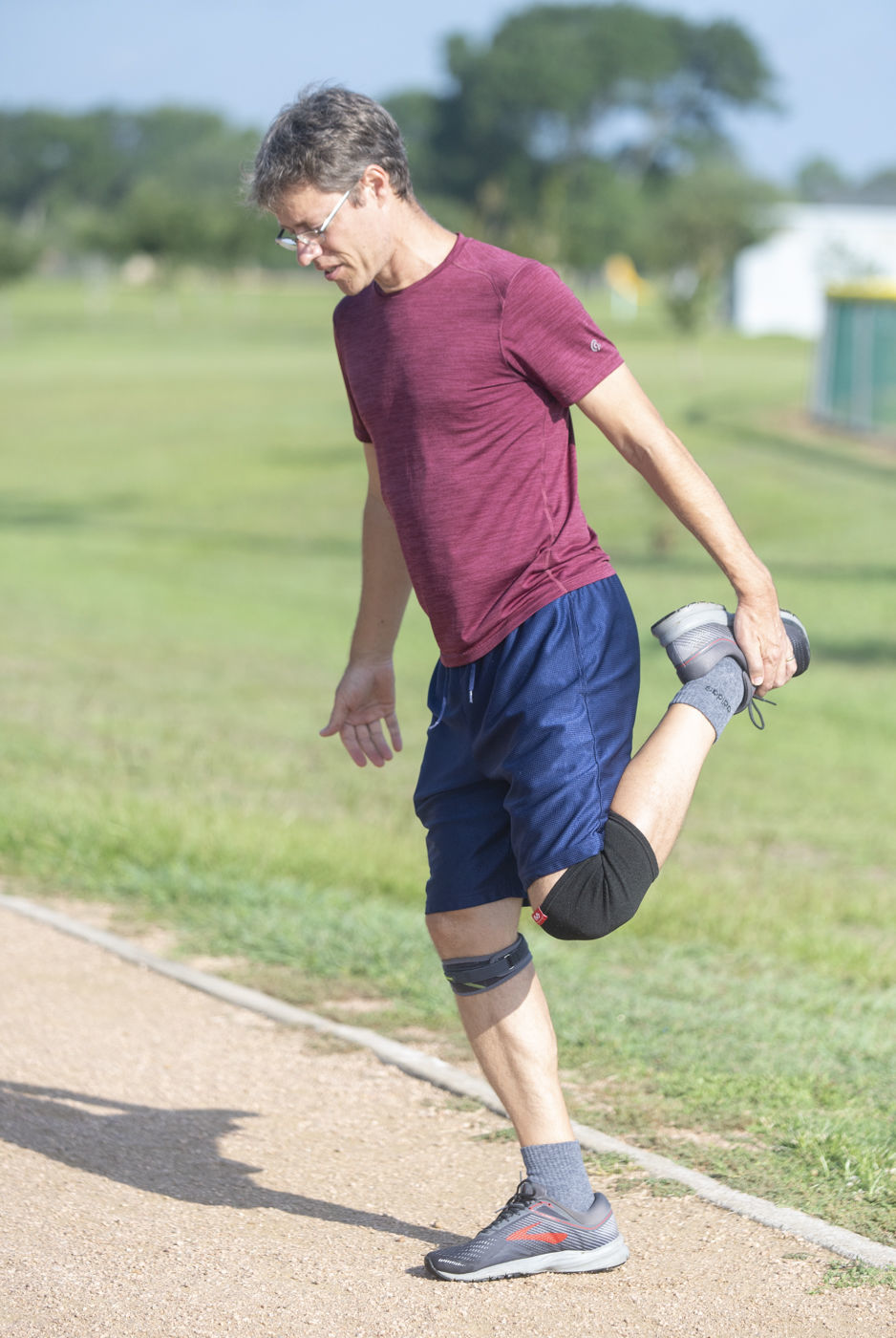 Angleton’s Nathaniel Outcalt stretches before putting in a few miles June 19 at Freedom Park in Angleton.

Nathaniel Outcalt has taken running to another level after sitting out for 24 years. Nowadays, Outcalt sets time challenges for himself to stay motivated.

It is with that smile Nathaniel Outcalt approaches each workout or running event nowadays at the age of 46.

Angleton’s Nathaniel Outcalt stretches before putting in a few miles June 19 at Freedom Park in Angleton.

If there is one thing that stands out about Nathaniel Outcalt, it is that big smile that flashes across his face when he is about to endure a running event.

After sitting out for 24 years of non-running adventures, Outcalt decided it was time to get off the couch. That was back on June 14, 2017, when he put on a pair of running shoes.

“There was a huge gap in there and I decided to get back into it — maybe lose a few pounds, which I did, and I’ve stuck with it for two years now,” Outcalt said.

Training for the Firecracker 4, which is set for Thursday morning at Dunbar Park in Lake Jackson, Outcalt has achieved goal after goal in an activity he’s fallen in love with.

“Initially for me, I wanted to get out and run a 5K and it took me about seven weeks to get to 3 miles,” he said. “I still remember the first time I went out to the track at Freedom Park. I ran a quarter-mile and thought to myself, ‘How am I going to do 3 miles?’ I ran a quarter, walked a quarter and got 3 miles in that first day.

“Two weeks later I ran my first mile and I kept increasing it and finally was able to run 3 miles straight, which took me about 33 minutes. Then I set a goal after that to stay after it and run 25 miles a month. One week last year I ran 27 miles, so I slowly upped my mileage, and my next goal was to run a 5K every month. I ended up running 24 of them in 2018.”

When he’s not running, the 46-year-old is leading people on the path to salvation as pastor of the nondenominational Kiber Street Church of Christ in Angleton.

“I have to motivate myself and I do that by setting these time goals knowing that I have to make it,” Outcalt said. “One of my goals was to break six minutes for a mile and I hit it at 5:59. That was on a treadmill, and I got so mad so I just cranked up the speed to make sure and make it.”

So basically, Outcalt will set a goal and go after it like a wild boar on a rampage. One other goal he set in 2018 was to accomplish 500 miles of running for the year. He ran 550.

“I never planned on running a half marathon, but I run with a group and they were all encouraging that I could do it,” he said. “So I signed up for the Houston one, but I couldn’t do it because it’s on a Sunday and I am a preacher. So I signed on for a trail run at Brazos Bend State Park and my goal was to run a nine-minute mile and I did an 8 minute, 38 seconds per-mile average for my first half. I was pretty thrilled because I finished 14th out of 200 runners and felt really good about that.”

Running has even improved his preaching, Outcalt said.

“I use more running illustrations, that is for sure, and maybe I get up to the pulpit a bit faster than I used to,” he said with a laugh. “Whenever I baptize people, I have more stamina if more people want to get baptized. I preach out at the prison and we did six baptisms last week, and I’ve gotten use to dunking the guys under the water.”

His running habit has helped him motivate others to achieve goals, he said.

“It’s been great, because I have found out that you can encourage and inspire other people which I never thought of that being a side effect,” Outcalt said. “To have some tell me that I inspired their son to run, especially with people who are middle-aged, but I keep telling them that if I can do it so can they. By November, after I had started in June, I had dropped between 25 to 30 pounds. I was eating a little better, but for me, it was getting out there and doing it.”

From running bridges at Surfside to trails in Yellowstone Park and the Grand Teton in Wyoming, Outcalt can’t seem to get enough of lacing up his shoes and going out for a run.

“I even kept doing it when I was on vacation. I would wake up at 4 a.m. and go run or do some hikes,” he said. “So I’ve really gotten into it and I just thought this is really sticking and I do enjoy it. As a preacher I laugh, because there is a verse where Paul tells Timothy, ‘Thou bodily exercise profits a little’ and I am getting as much as I can from that little.”

Outcalt’s goals for 2019 had to be put on reserve a while after experiencing an issue with his knee at the start of the year. Now he envisions himself running a half marathon in less than two hours; getting first place in more than half of the runs he accomplishes this year; run more national parks; start a T-shirt collection and beat his son more than the one time he did it in a 5K.

“I’ve gotten to the point where I actually missed running, so my body craves wanting to go run.”