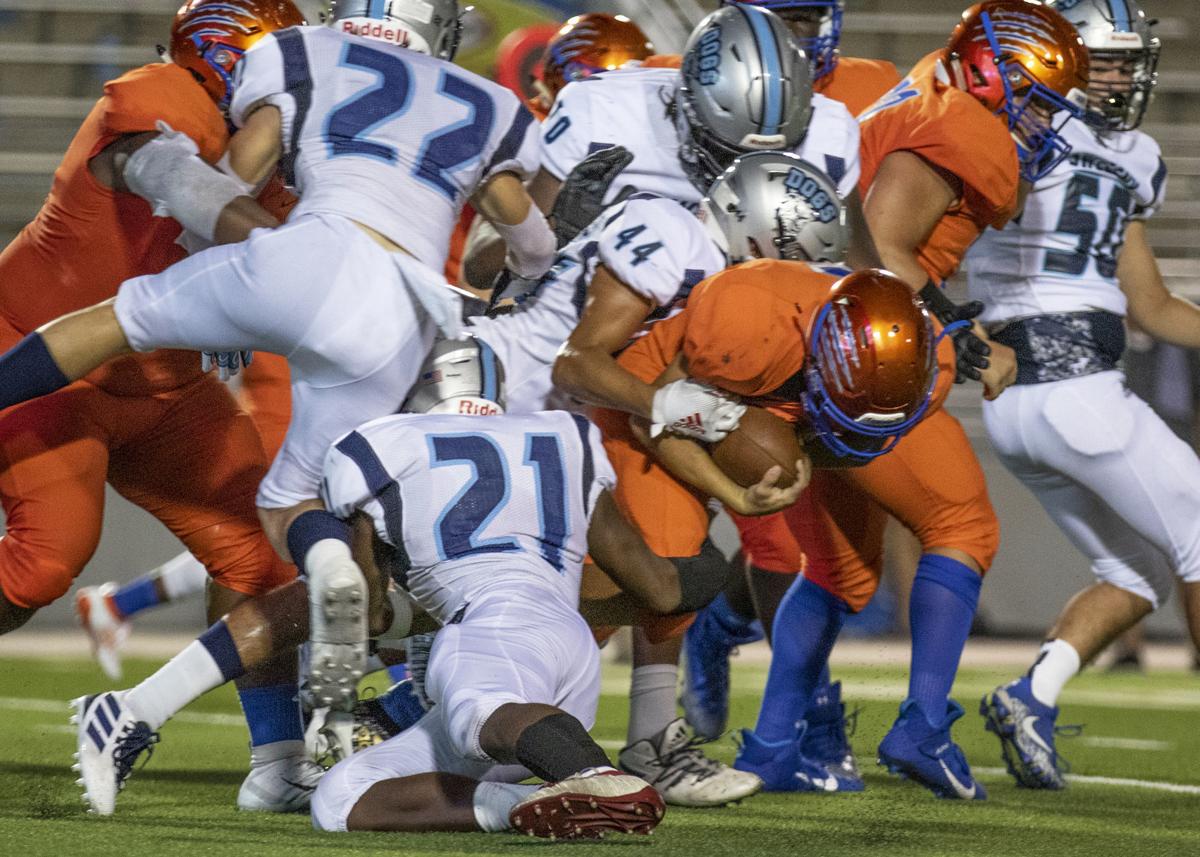 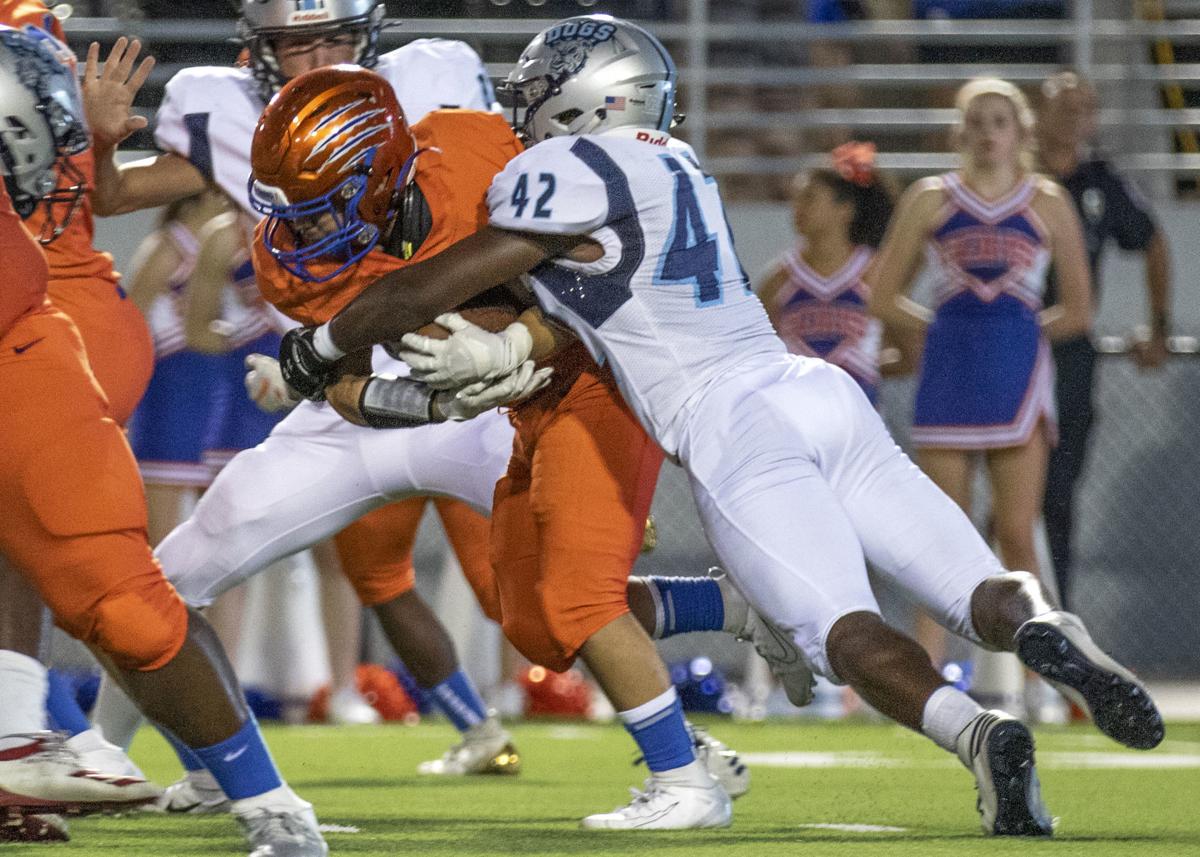 Logan Page of Sweeny lunges at Alex Lopez of Grand Oaks as he attempts to drive the ball downfield during Thursday’s night game at Woodforest Bank Stadium in Shenandoah. 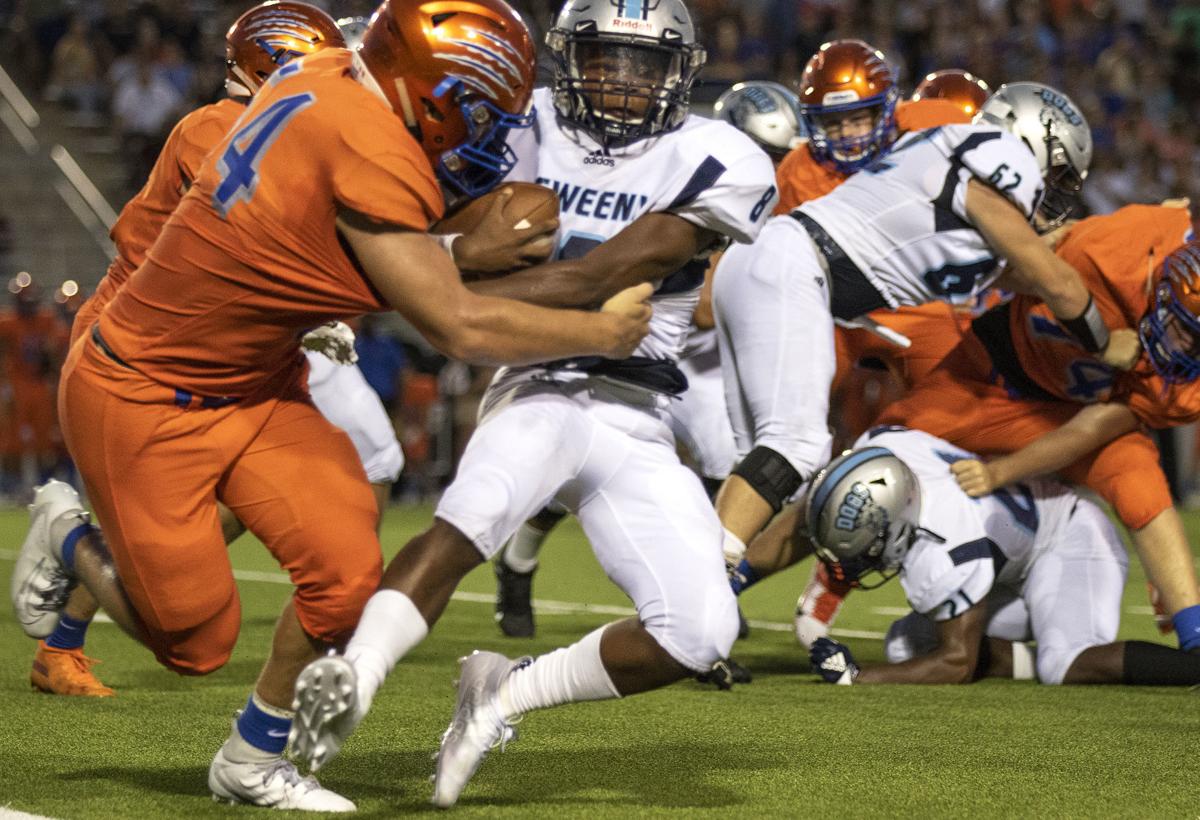 Sweeny’s Xavier Woods twists out of Grand Oak’s Jack Manning’s grasp before running for a 72-yard touchdown during the first half of Thursday night’s game at Woodforest Bank Stadium in Shenandoah. 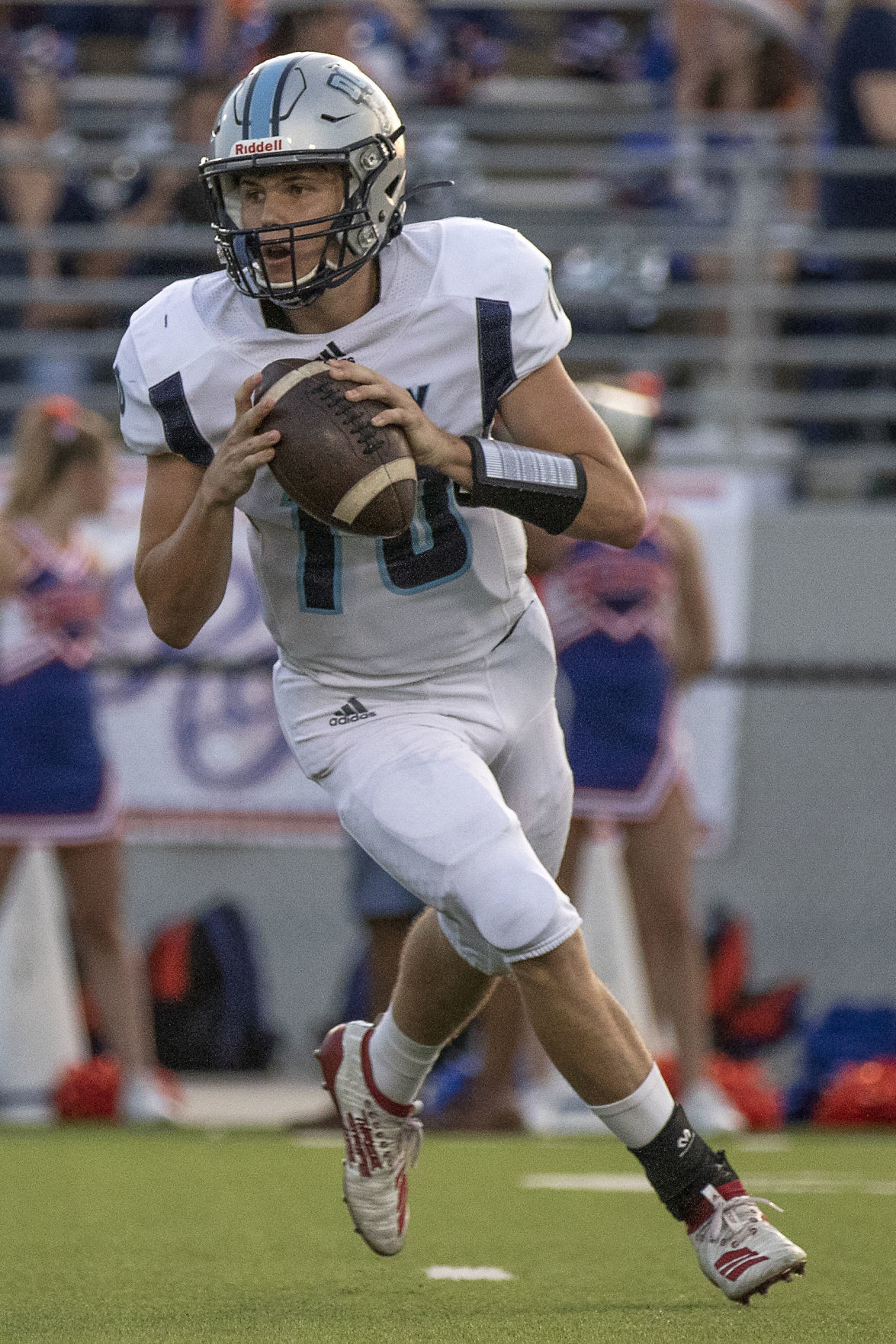 Logan Page of Sweeny lunges at Alex Lopez of Grand Oaks as he attempts to drive the ball downfield during Thursday’s night game at Woodforest Bank Stadium in Shenandoah.

Sweeny’s Xavier Woods twists out of Grand Oak’s Jack Manning’s grasp before running for a 72-yard touchdown during the first half of Thursday night’s game at Woodforest Bank Stadium in Shenandoah.

SHENENDOAH — Gassed at the end with the game on the line, the Sweeny Bulldogs went into overtime. But there was little doubt about what Sweeny coach Randy Lynch was going to do after scoring a touchdown to pull within a point of their opponent, 21-20.

“We couldn’t move the ball and once we scored we had already made up our minds,” Lynch said afterward.

Sweeny simply gave the ball to Jayden Ward, who then punched it in with the two-point conversion to make the trip home just a bit sweeter, 22-21 against Grand Oaks at Woodforest Bank Stadium.

It was the Grizzlies’ first varsity contest as a program.

“That is a stressful way to start the season,” Lynch said. “We had some opportunities early. On that first drive, we drove it all the way down to the 3 and we can’t punch it in. We need to find some guys up front to give us a bit of room.”

Despite missing Justice Clemons and Trey Fields, both starters on both sides of the ball did not make the trip. Also missing in action was kicker Mason Massey who was on the sidelines but in street clothes with an injury.

With Sweeny leading 14-7 with 4:37 left in regulation, the Grizzlies took over at their own 47-yard mark. Grand Oaks proceeded to convert on two fourth-down conversions, one being helped with a face mask on the defense to put them at the 8-yard line with eight seconds left.

Sophomore quarterback Sean Zver rolled to his left and found Seth Wright in the end zone. Grant Nickel converted the extra point to send it into overtime.

The Grizzlies scored first as Zver snuck the ball in from the 1-yard line, 21-14.

In Sweeny’s drive, Brett Robbins converted with a 14-yard pass to sophomore Collin Coker, on second and 14 as Coker made his first catch of the game for a first down.

After a false start, Robbins was as cool as he could be on second down from the 14-yard line as he found Coker one more time in the end zone.

“Trey threw the ball pretty well and our kids gutted it out,” Lynch said. “We had some guys not playing and some others were playing both ways and they played really hard.”

After a scoreless first quarter, the Bulldogs got on the board first with 10:26 before halftime when sophomore Xavier Woods ran into linebacker Jack Manning. It seemed like Manning had a good hold of Woods and was ready to throw him down until Woods wiggled out of his grasp and raced down the sideline for 74 yards to give Sweeny a 6-0 lead. The two-point conversion failed.

Grand Oaks got on the board as they took over with 8:08 left before halftime with Micah Cooper getting runs of 17, 10 and then 47 yards to knot the game up, 6-6. Up to that point, Cooper only had 14 yards on the ground as the Bulldog defense had been all over him.

Nickel gave the Grizzlies a 7-6 advantage, as it stayed until the final quarter.

With 1:19 left in that third quarter the Bulldogs went on an 80 yard drive with some big throws from Robbins. A first-year starter, Robbins looked comfortable in the backfield and at times had to scramble because of the rush, but he made some huge conversions.

One of those was on third and 11 as Robbins scrambled out of a rush and found Caden Wilhelm for 31 yards to place the ball at the 14 yard line.

“Again he did a heck of a job and found some creases,” Lynch said. “But we also missed some shots as well and had some guys open. We also had a few injuries but that is football.”

On first down from the 4, Woods found the end zone again with 8:13 remaining.

It was a good win for the Bulldogs even with all of the inexperience on the team.

Sweeny (1-0) will now prepare for Brazosport at Bulldog Stadium on Sept. 6.