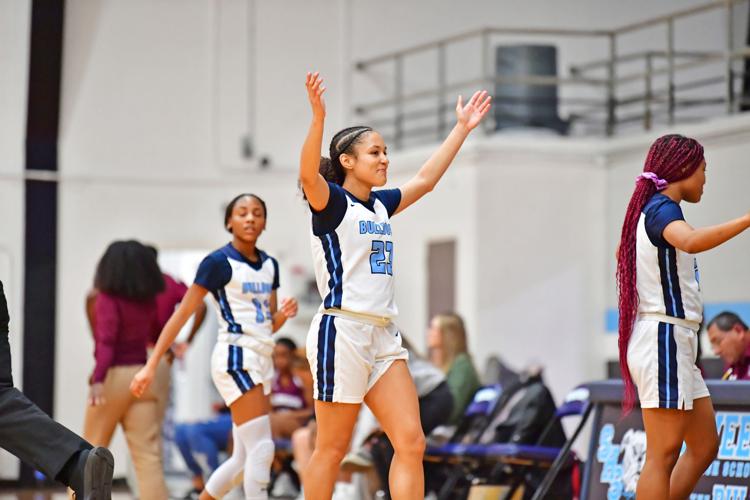 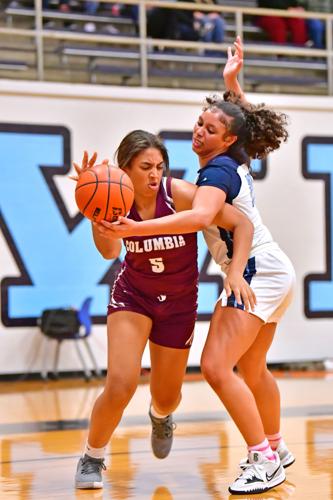 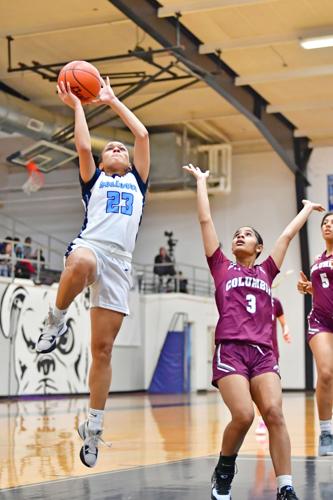 Sweeny’s Alecia King (23) goes in for a layup against Columbia’s Alexia Lewis during a District 26-4A girls basketball game at Sweeny High School. 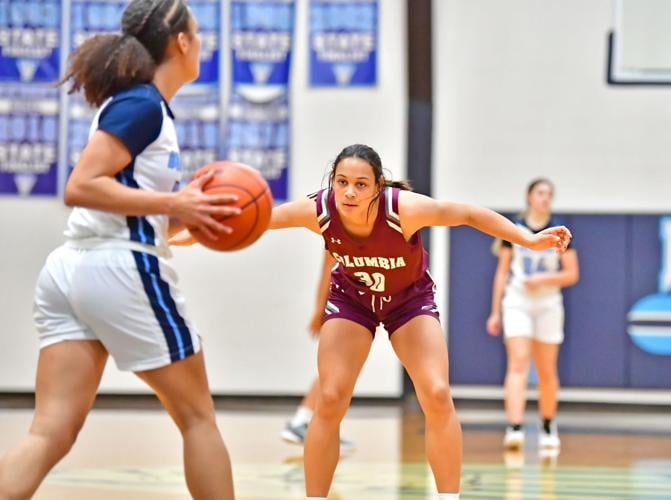 Columbia’s Alyssa Lewis (30) guards while Sweeny’s Alecia King brings the ball up the floor during a District 26-4A girls basketball game.

Sweeny’s Alecia King (23) goes in for a layup against Columbia’s Alexia Lewis during a District 26-4A girls basketball game at Sweeny High School.

Columbia’s Alyssa Lewis (30) guards while Sweeny’s Alecia King brings the ball up the floor during a District 26-4A girls basketball game.

When Sweeny coach Naroda Knox brings the energy to his bench, it trickles to the court.

The Lady Dogs turned on their man-to-man pressure defense, forcing many turnovers on the Lady ’Necks to help Sweeny lead late and hold on for a 53-48 District 26-4A victory at Sweeny High School.

“They came out with energy, and that was our go-to with how we start, but from there, they woke up,” Columbia coach Aaliyah Ward said. “We did our best to stay with them, we did a lot of good things, but we had a lot of silly mistakes, turnovers and silly fouls and that’s where the game turned.”

After trailing 13-9 at the end of the first quarter, Sweeny pressed Columbia the rest of the game, especially in the second half. However, the Lady Dogs outscored the Lady ’Necks 13-7 in the second quarter and 12-4 in the final 5:44 of the first half.

The theme continued in the third quarter when Sweeny forced 13 turnovers leading to 14 points while clinging to a 40-35 lead through three quarters.

“I watched the last quarter of their Iowa Colony game, and I talked to the Iowa Colony coach after the game, and I said, ‘I noticed you went small.’ They went small, and they just ran them and pushed them,” Knox said.

An Alecia King pass to Shania Woodard resulted in a bucket to open the final stanza for Sweeny. Shaylee Robinson’s bucket gave the Lady Dogs a 44-35 lead with 6:55 to go following four Columbia turnovers to open the quarter.

Columbia fought back again, beginning with Alyssa Lewis hitting from downtown on a pass from Alexia Lewis and a 3-pointer and transition basket by Brynlee Livingston closed the game to within 44-43.

Alexia Lewis’ transition bucket capped the Lady ’Necks’ 10-0 run and gave the visiting team its first lead since the 2:50 mark of the second quarter. Kay’ana Britton’s free throw tied the game at 45 with 4:30 left, and Sweeny held on from there.

Woodard passed to King for a bucket with 4:12 left, and a bucket by King gave the Lady Dogs a 49-45 lead with 2:19 to go. A free throw by Alexia Lewis and a putback by Livingston were the last points for Columbia, making it a 49-48 game with 1:34 left as Sweeny scored the game’s final four points, all by King, to hang on.

The senior finished with 12 points.

“She’s come a long way,” Knox said. “I think she has tapped into other areas that she’s good at that she wasn’t before. She has opened up and gotten outside of the box.

“I have figured out how to coach her and get the most out of her.”

The Lady ’Necks led 16-10 after Taliyah Bell found Londyn Brown for a bucket with 5:44 remaining in the first half.

Then the Lady Dogs went to work.

Hailey Eulenfeld hit a free throw, and Robinson got the bucket and the foul for the old-fashioned 3-point play to close the gap to 18-14 with 5:17 left in the half.

Woodard’s bucket transition made it an 18-16 game. With 3:23 remaining, King passed to Ma’rya Quarles, who knocked down a 3-pointer from the corner to give the Lady Dogs their first lead of the game, 19-18, and capping off a furious 9-2 run thanks to 13 Lady ’Neck turnovers.

“Ma’rya has been playing well the last three games,” Knox said. “She scored 17, 14 and 15, and she is playing good defense and going up and down the court.”

A putback by Eulenfeld broke the 20 tie to give Sweeny a 22-20 halftime lead.

Sweeny’s pressure was turned up a notch in the third quarter, feeding that energy to the Lady Dogs. Columbia opened the second half with four consecutive possessions, leading to back-to-back offensive rebounds followed by a bucket by Britton, a transition bucket by King, a bucket by Robinson and a 3-pointer by Britton to race the Lady Dogs out to a 31-20 lead 1:08 into the third quarter.

The Lady ’Necks battled back and ended the quarter with a five-point deficit courtesy of a 14-9 advantage in the final 6:36.

Alyssa Lewis snapped Sweeny’s 9-0 run with a free throw, and Brown’s bucket closed the game to 31-23 about a minute later. Alexia Lewis drained a 3-pointer to pull within five with 4:49 left in the third quarter.

King found Quarles under the basket for the Lady Dogs, and Kamryn Bragg’s free throw pushed Sweeny’s lead back to eight with 3:30 to go. Livingston responded with a 3-pointer to close the deficit back to five, 36-31 and Brown’s putback with 6.3 seconds left made it a five-point game again to enter the fourth quarter.

“We tell them that it’s the second round of district, and every game is a fight,” Ward said. “Coming to Sweeny, you have to go in mentally strong, and we tell them one play at a time and every possession counts, take care of the ball and capitalize. They stuck with it, but foul trouble at the end with the one-and-one situation hurt us.”

The win was significant for the Lady Dogs in their hunt for a playoff berth for the eighth consecutive season.

“This was an important win for us,” Knox said. “We felt like the first game against them got away from us with some undisciplined mistakes in that first game, but we are getting better, and they are allowing us to coach them.

“We knew how important this game was to win, which means we might end up playing them a third time, it’s a possibility, but it was a big win to keep us on track for the playoffs.”

“As far as seeding with points, I think Sweeny may take the third spot, and we moved down a spot,” Ward said. “But they fought to the end.”

Livingston led the Lady ’Necks with 18 points, and Brown turned in a double-double with 12 points and 10 boards. Hayley Broussard had a good night in the paint with 11 rebounds.

“She always plays big in the paint. She is strong, and she definitely grabbed a lot of rebounds tonight,” Ward said.

Jake Dowling is the sports editor for The Facts. Contact him at 979-237-0161 or by email at jake.dowling@thefacts.com.

A recent national survey showed 73 percent of Texans say they always lock their doors at home, putting the state in the middlle of the pack (Georgia led with 93 percent; North Dakota had the least at 46 percent). How often do you lock your doors?

Submitting this form below will send a message to your email with a link to change your password.

An email message containing instructions on how to reset your password has been sent to the e-mail address listed on your account.

This offer is currently unavailable.